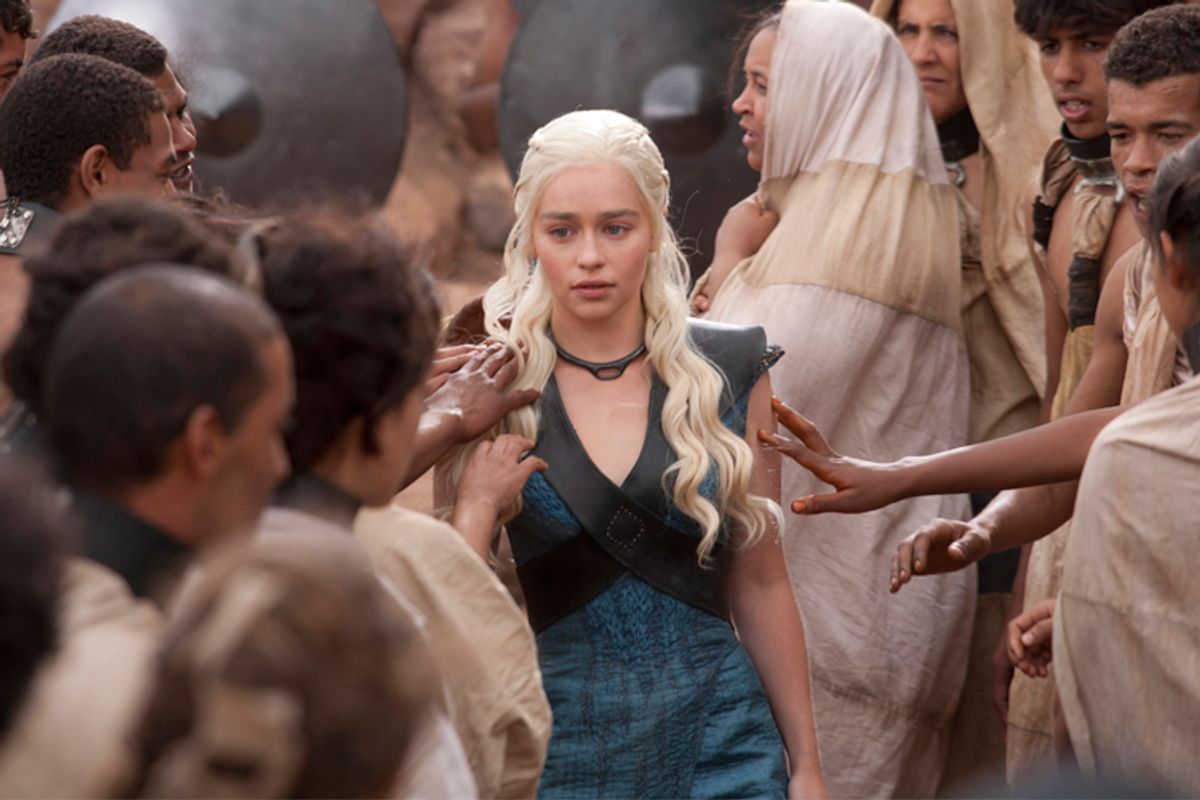 When I was 7 I asked my mom if I could dye my hair blond and get blue contact lenses. It’s probably the first serious conversation I ever had about my appearance and all I wanted to do was look like Luke Skywalker. I wanted it so badly. She was appalled and I couldn’t understand why. "Star Wars" was Everything. There were no Latinos running through the halls of the Death Star, blasting storm troopers. Of course I was caught up.

I’ll be 34 this year and we’re only beginning to see a change in the scenery when it comes to diversity and the fantastic. A recent UCLA study found that even though racial and gender diversity in television remains appallingly low, more diverse shows bring higher audiences while less diverse ones struggle. Meanwhile, some major networks may finally be getting the message. At this year’s annual Fox Broadcasting confab, titled “Seizing Opportunities,” the underlying theme was more diversity equals more money. Speaking to an invitation-only crowd of executives, producers, agents and media coalitions, Fox COO Joe Earley said this about welcoming more diverse shows: “Not only are you going to have more chances of a show being made here, more chances of a show being a success on TV, more chances of making it into syndication, more chances of a show selling globally and making you millions of dollars, but you are going to bring more viewers to our air and keep us in business.”

Cultural critics have rightly decried whitewashing in the name of social justice. Networks are now beginning to see dollar signs where they once imagined dearth. But beyond money and morality, diverse programming is also a question of quality. "Racist writing is a craft issue,” the poet Kwame Dawes said at this year’s AWP conference. “A racist stereotype is a cliché. It's been done. Quite a bit. It's a craft failure."

Without an understanding of culture, power and history, diversity is useless; it’s blackface. And television has often given us nothing but that: cheap stand-ins and tokens to up their numbers and check off boxes.

"Sleepy Hollow," Fox’s runaway hit of the season, does amazing work balancing the supernatural with a modern noir aesthetic, and as NPR’s "Code Switch" points out, it features not one but two outstanding black women who are neither sexualized vixens nor Aunt Jemimas. Both Abbie and Jenny are normal, intelligent, flawed human beings, not cardboard stock characters. It seems so simple yet we’ve seen it so rarely in television’s long, racist history.

"Sleepy Hollow" does best when it takes a critical, complicated approach to race and history. A scene in a recent episode grappled with the irony of Thomas Jefferson being a slave owner and father of American independence; Ichabod Crane, who has returned after a few hundred years sleeping off a mortal ax wound, ends up reevaluating his hero worship of Jefferson. With some exceptions (like, as fantasy writer Saladin Ahmed enjoys reminding me on Twitter, the continued lionization of President Washington), the show approaches race and history with a refreshingly contextual, critical lens. It doesn’t gloss over the all-American legacy of slavery and genocide. And as Mr. Dawes points out, this is an issue of craft. The critical lens gives depth and gravity to the work. Ichabod is a stronger character, more human and more humane, for deconstructing his glamorous view of Jefferson.

In James Cameron’s "Avatar," a white man once again plays savior, this time to a planet of tall blue aliens unambiguously suggestive of Native Americans. What if they’d cast Michelle Rodriguez, who plays a stereotypical no-nonsense doomed Latina side character, in the lead role instead of Sam Worthington? The context of an interesting movie about race is already in place. Without a single word changed in the script, "Avatar" would have taken on layers of new meaning, opened conversations that mainstream, white cinema has not even approached. What happens when marginalized cultures from within a dominant sovereignty are brought in to participate in the destruction of other marginalized cultures? Black soldiers in the U.S. army have grappled with this question since the first all-black battalions fought for a country that saw them as property. Instead, though, we’re left with a cliché: the same old really nice white dude, filling a void in himself by appropriating and then saving another culture. What we could’ve had was something new: a story of intersectionality and solidarity across interplanetary colonialism.

Audre Lorde wrote that poetry “forms the quality of the light within which we predicate our hopes and dreams toward survival and change, first made into language, then into idea, then into more tangible action.” TV and movies, our modern mythology, fall somewhere along this spectrum of poetry, idea and action. The realm of the fantastic offers a rare opportunity for artists to challenge and expand our concepts of privilege, resistance and social justice. We must, after all, imagine the changes we want to see. And these images, reflected back at us again and again, have the power to filter our own self-reflection, our own sense of power toward lesser and greater purposes. What quality of light will we predicate our hopes and dreams on?