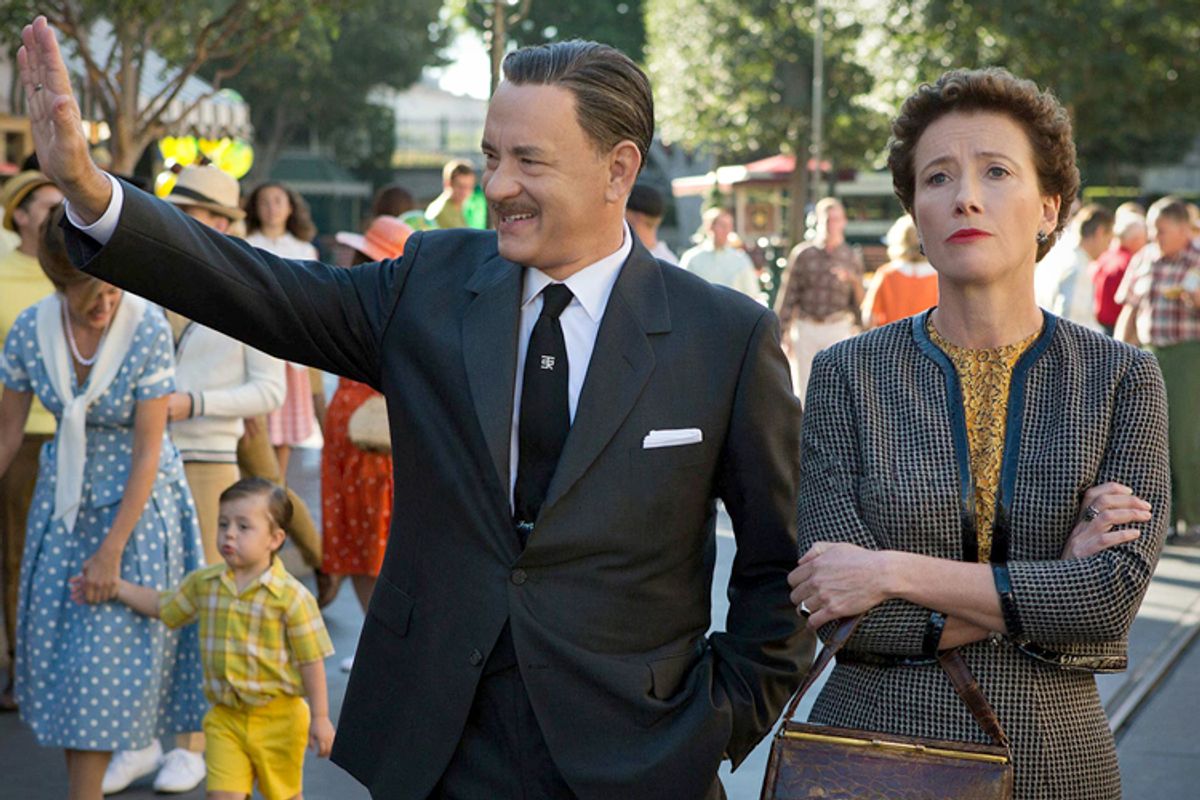 The great worm wrapped around the world eats his own tail, and here we are: Walt Disney himself becomes the protagonist — the ever so mildly ironized protagonist, to be sure — of a Disney film, which like all Disney films argues for an idealized marriage between art and showmanship, for the sentimental unity of childhood and adulthood, and for the healing of psychological trauma through mass-produced pleasure. There’s something to be said for those arguments, if we’re honest, and “Saving Mr. Banks,” which stars Tom Hanks as a bluff and cheerful Walt Disney and the marvelous Emma Thompson as Pamela Travers, author of the Mary Poppins books, is a sneakily effective work of manipulation that should charm family audiences through the holiday season and beyond.

As for the movie’s portrayal of the awkward, prickly and sometimes antagonistic relationship between Disney and Travers, which produced the 1964 hit musical “Mary Poppins” (which has just been released, not coincidentally, in a 50th-anniversary home-video package) it’s a weave of truthfulness, mendacity, cynicism and supposedly good intentions worthy of Walt himself. It bears about the same relationship to what actually happened as Julie Andrews’ sunny, can-can-dancing, family-healing and profoundly conformist Mary Poppins bears to the mysterious, acrid sorceress of Travers’ books. “Saving Mr. Banks,” which was directed by John Lee Hancock (“The Blind Side”) from a script by Kelly Marcel and Sue Smith, is a story about art and showmanship told entirely from the showman’s point of view, and that’s certainly not surprising. Beyond that, it eagerly assumes that the entire audience shares its Hollywood-totalitarian worldview, and that we all understand that for the greater good of humanity this eccentric English lady with her precious little books needs to be steamrollered into surrendering her creation, so it can be reshaped as a cracker-box message of family redemption, complete with dancing penguins and Dick Van Dyke doing the worst accent work in the history of show business.

I’m not trying to convince you that the Disney “Mary Poppins” is a bad movie, or that Travers was right with her high-handed, creative-class bigotry about Disney cheapening and vulgarizing everything he touched. OK, she was a little bit right, but also she was wrong. The Julie Andrews “Mary Poppins” is a tremendous popular entertainment, made and delivered by one of the world’s greatest showmen at the peak of his power and influence; my kids, and very likely yours, continue to enjoy it 50 years later. It captures bits of the Travers spirit, here and there; it made her rich, and it brought her millions of new readers. If Travers disliked its songs, its sets, its colors, its general un-Englishness and the way it turned Mary Poppins into a “hoyden” and a “soubrette” (her words), she nonetheless cashed the checks. She famously cried during the Hollywood premiere (to which Disney had initially not invited her), and “Saving Mr. Banks” has the brass to portray those tears as joy or fulfillment or psychic liberation, an interpretation that falls somewhere between artistic license and absolute horseshit.

No words in any screenplay are worth less than the ones at the beginning that say “based on a true story” — I mean, isn’t everything, at some remove? — but in general terms we can say that the outline of “Saving Mr. Banks” is accurate. By the spring of 1961, when Disney flew Travers to Los Angeles to spend a week harassing and haranguing the storyboard artist and songwriters who were developing ideas for “Mary Poppins,” he had spent more than 15 years pursuing the movie rights to her books, which he’d learned about from his young daughter, Diane, during World War II. He might never have gotten his way if Travers’ books had kept on selling, but by the early ‘60s she was seen as a publishing has-been and badly needed money. The two had already had a face-to-face meeting in London, sometime in the ‘50s (whereas in the movie they appear to be meeting for the first time), and she later described his manner as that of a man “dangling a watch, hypnotically, before the eyes of a child.” But one may well ask who hypnotized whom, because Disney would end up offering Travers an exceptionally generous deal, quite unlike what he paid other authors: She got $100,000 (at least three-quarters of a million, in today’s dollars), 5 percent of the movie’s gross earnings and, remarkably, the right of script approval (although not, she would learn later, the right to final-cut approval of the film).

It’s also true, as depicted in “Saving Mr. Banks,” that Travers was ensconced at the Beverly Hills Hotel — which prided itself, then as now, on delivering a proper English tea service — and was taken to Disneyland and offered a tour of the company’s state-of-the-art studios in Burbank, neither of which interested her. These contrasts are a source of much of the comedy in “Saving Mr. Banks,” in which Thompson plays Travers as a curt, ill-tempered and exceptionally proper English lady, a fish out of water in the promiscuous California sunshine and the informal corporate culture of Disney (where everyone from the janitors on up addressed the boss as Walt).

But as soon as we leave the general outline behind and get down to specifics, “Saving Mr. Banks” stops bearing any resemblance to a true story and starts being a Disney movie: a culture-clash comedy, almost a platonic rom-com, in which the uptight English chick has to learn important life lessons from her manly but relaxed American sweetheart, deal with the unresolved trauma of her past, pull the stick out of her ass and learn to live a little. (An important assist is delivered by Paul Giamatti, playing Travers’ simple-minded chauffeur, imbued with life wisdom. At least they didn’t give the part to a black person.)

Thompson is always a delight, in any role, and she’s very funny playing Travers as a bastion of buttoned-down pride, who uses the façade of propriety to conceal the fact that she’s immensely arrogant and inconsiderate of others. “Oh, dear,” she says with a concerned look to a young mother, while boarding the plane at Gatwick. “Do you think the child will be a nuisance? It’s an 11-hour flight!” Mary Poppins, she informs Walt, “does not cavort, Mr. Disney. She does not twinkle.” But this depiction of Travers as a tweedy, upper-crust Englishwoman who finds all Americans to be uncouth barbarians is entirely a screenwriter’s archetype, or stereotype, and has almost nothing to do with the actual person.

Pamela Travers, whose birth name was Helen Goff, had grown up in rural Australia — a fact she never concealed, though it comes in the movie as a big reveal — had known William Butler Yeats in Ireland and had a long, borderline-romantic friendship with the poet A.E. (aka George Russell), had lived for several years in New York and for two summers among the Hopi and Navajo people of the American Southwest, had studied Zen Buddhism in Japan and had apparently had several long-term intimate relationships with other women. She was hardly the cloistered dame seen in "Saving Mr. Banks," and was a far more worldly person than Walt Disney.

In “Saving Mr. Banks,” the story of Pamela/Helen’s Australian childhood, and her relationship with the father who drank himself to death when she was a child (played by Colin Farrell in a series of sentimental flashbacks), is presented as the secret key to the creation of Mary Poppins, and to Travers’ eventual truce with Disney. The Zen study, the Irish poetry, the Manhattan apartment and the lesbian partnerships never come up, because those don’t belong in a Disney movie, nor do we learn that Travers was more likely to wear Navajo skirts and Native American silver jewelry than a tweed twin-set. Instead we get a cheerfully insidious sitcom-style plot, in which the sunny optimism of Disney writer and artist Don DaGradi (Bradley Whitford) and songsmiths Richard and Robert Sherman (Jason Schwartzman and B.J. Novak, respectively) gradually wear down the dreary tea-guzzler’s resistance and she ends up singing along with “Let’s Go Fly a Kite,” after insisting that the proper English phrasing would be “Let’s Go and Fly a Kite.”

My co-worker Dan D’Addario recently suggested that “Saving Mr. Banks” should probably be considered a leading candidate in the Oscar race, since it’s another self-congratulatory movie about moviemaking, in the mold of “Argo” and “The Artist,” and because it exudes that ineffable odor of well-crafted middle-middle movieness that makes academy voters go weak in the knees. He’s probably right. Don’t get me wrong: It’s a highly enjoyable picture, and please feel free to go see it with your relatives and write me a letter telling me what a small-minded cuss I am for observing that what it presents as a heartwarming true story of conflict and redemption is actually a propaganda fable celebrating the total victory of Hollywood, the Disney-devouring of everything.

It’s one thing to argue that Disney was right and Travers wrong, or that their oil-and-water, commerce-and-art chemistry ultimately produced a terrific movie that bears a distant relationship to a terrific book. But the scene in “Saving Mr. Banks” that sums it all up, which is no doubt meant to be jocular but struck me as terrifying, comes when Thompson’s Travers gets into bed, in her overdecorated room at the Beverly Hills Hotel, with a gigantic stuffed Mickey Mouse. It’s not enough that Walt Disney turned Mary Poppins into a Disney character; that worked out OK for everyone. Now, from beyond the grave, his cold, dead hand has reached out and turned Mary Poppins’ ferocious and unquenchable creator into Mickey’s bitch.