Pick of the week: A dazzling American con, circa 1978 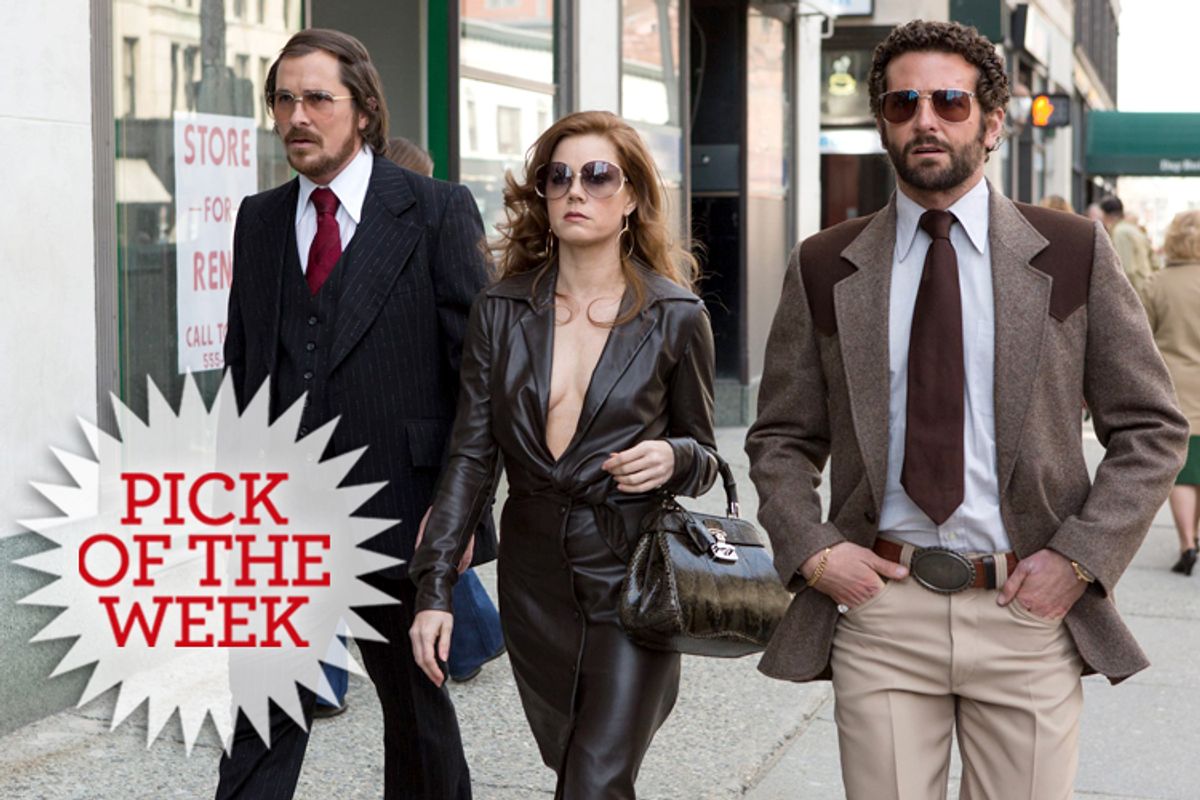 It’s entirely possible that the real subject of “American Hustle” is not double-crossing con men, widespread corruption and the uncontrolled hysteria of life in 1970s America, but simply the movie’s outfits, hairstyles and period soundtrack. But that’s no small accomplishment: what clothes, what hair and what music! Amy Adams’ succession of outrageous plunging necklines — designed to mesmerize you, and distract your focus from her mediocre English accent, while she takes your money — are worth the price of admission all by themselves. Constructed with tremendous cinematic verve and stacking terrific performances one atop another like logs beside the Yuletide hearth, David O. Russell’s latest will strike many people as the best Scorsese movie since “Goodfellas” — and without doubt the best not actually directed by Martin Scorsese.

Russell has gone through a peculiar career renaissance over the last few years, and is now one of Hollywood’s most reliable A-list directors, cranking out meaty, star-powered dramedies that please critics, Oscar voters and the paying public without quite feeling like pander-bear bait. His last two movies, “Silver Linings Playbook” and “The Fighter,” piled up more than a dozen Oscar nominations between them, and provided Christian Bale, Jennifer Lawrence and Melissa Leo with their biggest career prizes to date. I’m not trying to impress you of Russell’s importance through statistics, only observing that this is the same guy who spent more than a decade in indie-film purgatory after his breakthrough with “Three Kings” in 1999, which left everyone in Hollywood convinced that he was a control freak, a tyrant and/or a ditherer who was impossible to work with.

“American Hustle” feels like the fulfillment of this comeback, a work of tremendous confidence and dazzling showmanship that may just be a delirious movie-as-drug-high or may, if you choose to read it this way, contain a level of commentary about the nature of America and the illusioneering of Hollywood. Although the script, co-written by Russell and Eric Singer, draws extensively on the Abscam bribery scandal of the late ‘70s, a particularly crazy news blip from an era of generalized insanity, I’m delighted that they never try to claim it’s all true. “Some of this actually happened,” reads a title at the beginning of the film, and that’s inarguably correct. Indeed, Christian Bale’s opaque, Brando-esque performance as a Bronx-born Jewish con man named Irving Rosenfeld, with an enormous gut and an elaborate combo of toupee and comb-over, is clearly inspired by the real-life Mel Weinberg, a hustler who, like Irving, was compelled or entrapped into working for the FBI.

Russell flings us right into the middle of this outrageous yarn, opening with Irving laboriously assembling his hairpiece in preparation for an attempt to bribe a politician in a luxury suite at Manhattan’s Plaza Hotel. From there we learn, bit by bit, how a small-time crook and dry-cleaning entrepreneur from the Grand Concourse wound up partnered with a smokin’ but obviously phony English noblewoman (Amy Adams) and a reckless, ambitious hothead of an FBI agent named Richie DiMaso (Bradley Cooper). These people, and everyone else in the story, are drawn to one of late 20th-century America’s biggest honey pots, the East Coast gambling breakthrough that led to casinos in Atlantic City.

One of the running thematic gags in “American Hustle,” I guess, is the fact that Irving, whose entire career has been built on two-bit scams, is in some sense the most honest and genuine of these people. Adams’ character presents herself as “Lady Edith Greenlee,” a babealicious Studio 54-type jet-setter somehow connected to London banking money, but she’s actually Sydney Prosser, formerly of Albuquerque, N.M. (Not a spoiler! I promise.) Richie is a ferocious coke fiend — if you’ve ever been around cocaine, you won’t have to see him snort up to know that — who curls his hair, cheats on his fiancée, abuses his hapless superior (the mournful Louis C.K.) and will do absolutely anything to get ahead.

That’s without even getting to the movie’s second-tier characters, who are, if anything, even better. How Jennifer Lawrence squeezed this movie into her schedule I have no idea, but she damn near steals it all with her pathetic-appealing sexpot role as Irving’s wife, Rosalyn, who is determined (at least at first) to win him back from the seductive Sydney or Edith or whoever the hell she is. One could argue that this is another one of those movies where an unprepossessing dude can pull two immensely hot women. But beneath Irving’s flab, atrocious hair and anti-fashion sense lies Christian Bale, after all, who can certainly capture the way an unattractive person sometimes exerts tremendous magnetism on those around him. Amid all the showboating of “American Hustle,” Bale remains reticent and hooded, playing a guy whose livelihood involves giving nothing away. I couldn’t take my eyes off him (which is remarkable, considering the available options).

Russell also gives us an uncredited cameo by Robert De Niro I won’t tell you about, Michael Peña as a Mexican-American FBI agent posing as an Arab sheik, Alessandro Nivola as a federal prosecutor who is basically the young Rudy Giuliani, Jack Huston and Shea Whigham in supporting lowlife roles, and numerous other delights. But I think my favorite of all these characters is Jeremy Renner’s Elvis-haired Carmine Polito, the mayor of Camden, N.J., and all-purpose mobbed-up Jersey power broker. (One of the key people brought down in the Abscam scandal was real-life Camden Mayor Angelo Errichetti.) Carmine is a genuine and generous old-school machine politician, devoted to a city that has become largely black and brown, who sees gambling, the Mob and all the associated corruption as a necessary evil to get the stricken South Jersey economy back on its feet. He and Irving are kindred spirits, honest crooks with no illusions who know how the world works.

Once you’ve sucked down the eye-popping wardrobes, the show-stopping performances and a soundtrack that ranges from Santana’s “Evil Ways” to Tom Jones’ “Delilah” to “Live and Let Die” to what I believe is an Arabic cover version of Jefferson Airplane’s “White Rabbit,” much of the fun and mystery in “American Hustle” boils down to the long-con struggle between stoical Irving and fire-breathing Richie. Who’s gaming whom most effectively, and which one of them will get the girl (whoever she is, and wherever she came from)? As I intimated earlier, I’m not convinced that plot details are especially important, or even that “American Hustle” really has a plot. It’s a fable of delusion and entropy, all razzle-dazzle, that’s pulling a long con of its own and suggesting that all of American life is a colorful but meaningless shell game. But isn’t it a pleasure to get hustled by such exquisite professionals?