Tea Party congressman warns Salon: Another shutdown may be coming! 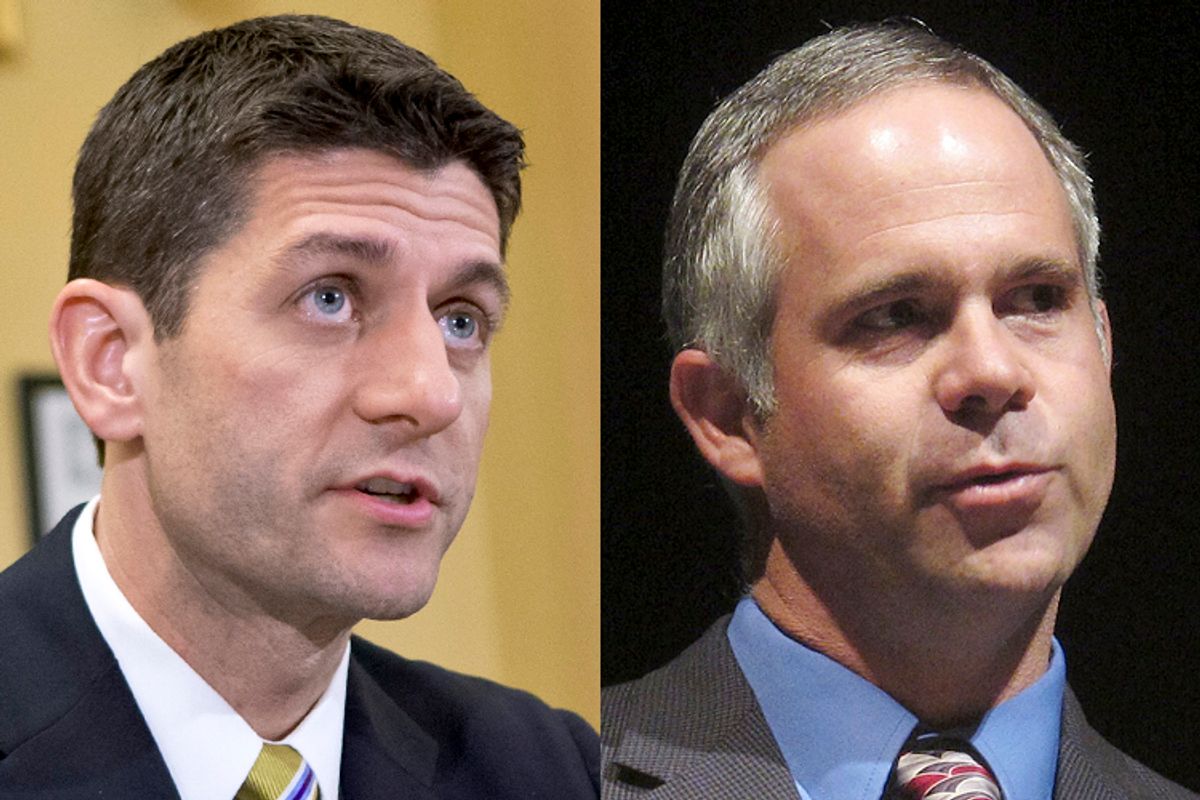 By a 332-to-94 vote Thursday night, the House passed a budget deal that – despite taking money from federal workers’ pockets and leaving long-term unemployed in the lurch – was staunchly opposed by major right-wing groups. Among the critics was Tea Party stalwart and Kansas congressman Tim Huelskamp, whom Boehner kicked off the Budget Committee in an alleged purge last year. In an interview before the vote, Huelskamp charged that the deal “doesn’t avoid a government shutdown,” told Salon he hears rumors Boehner’s retiring, and skewered Paul Ryan’s response to right-wing attacks on the deal he brokered. A condensed version of our conversation follows.

Congressman Ryan described this as an agreement that “does not raise taxes, that does reduce the deficit and produces some certainty and prevents a government shutdown.” Why do you disagree with his assessment?

I think I disagree with all of those points …

It doesn’t avoid a government shutdown. We still have to pass an omnibus bill … Knowing and guessing what Harry Reid might do – not knowing but just guessing, I mean – is that he’s going to ask for more. He’s going to ask for unemployment compensation, something along that lines, as part of the omnibus. And he indicated there’s more debates between now and Jan. 15. And so there’ll still be that debate. The only way – again, the only way you avoid a shutdown is you give everything the other side wants. And my guess is Harry Reid will continue to demand more things.

Secondly, it does raise taxes. You can call them fees, you can call them revenue enhancers – whatever. But it’s just more money going into Washington … And the new money’s going to spending and somebody’s got to pay for the $63 billion spending increase.

And I know Paul Ryan and the speaker have also claimed this is a deficit reduction bill again. That’s only assuming that in 2022, Congress is going to maintain these sequester cuts that they’ve put newly into the bill, or into the law. And at the same time they’re undoing the sequester, they’re claiming sometime after the 2022 election, better things will happen. And that strains credibility for folks to even make such a claim. It’s a spending increase, and there’s no ifs, ands or buts about it.

So do you expect we’ll see another government shutdown?

I don’t know. Again, it depends what Harry Reid and the speaker do. But again, judging what Harry Reid was willing to do during the shutdown, and not vote on anything, and demand and demand and demand, I think the die might be set, where he recognizes that our Republican leadership are going to eventually cave. And he’s going to demand something, and they’re going to say, “Gosh, if we don’t give it to him, we’ll shut the government down.”

Harry Reid just might do that. It’s hard to tell, hard to predict. But I know it’s not over yet …

Even if they don’t want to go above the numbers that will be voted on in the House today, there’s plenty of disagreements how you move the money around…There’s dozens and dozens of riders on environmental issues, for example, that House Republicans will demand will be in there, and Barbara Boxer will demand will be out, and there’ll be a lot of debate. So there’s a long ways to go before we can say there’s a deal that funds the government for the rest of the year …

And so what are your red lines to continue to fund the government?

For myself and quite a few other conservatives, we had settled on: OK, we’ll keep the sequester. That’s our line. And the sequester is not where I wanted to be -- I think it’s not the best way to make cuts -- but it’s what President Obama, Sen. Reid and Speaker Boehner agreed to, and got a majority of House and Senate -- a majority of Democrats, I think maybe a majority of Republicans, voted for this deal. And now they’re undoing that. So Republicans, conservatives, are drawing the line, saying let’s keep the sequester. That’s the law of the land, and there is just no excuse for Republicans abandoning what was their claim to victory for the past two and a half years. And we heard that for all of October …  “Never fear, we’re gonna hold the sequester.” They told us that in January, February, March, April, through the entire year, until this plan was announced.

So who’s to blame for this plan?

The ones who negotiated. I think that you have to give the credit to the Democrats. They did a great job in negotiating a very favorable deal. They got $63 billion in new spending. They got the Republicans, in doing that, to abandon the sequester, to abandon the position of that we want to reduce the deficit. And I think the biggest losers were the American people … They didn’t want another $63 billion in deficit spending just for Washington to be able to go home quickly in December. Just very disappointed in the whole plan.

So when Rep. Ryan decries the criticism of his deal from the right as a “a strange new normal,” and says “it’s funny,” what’s your reaction to that?

Well, I don’t know how strange that is. Welcome to Washington.

Whether you’re speaker, or you’re a vice-presidential candidate, or you’re a lowly congressman from Kansas, people disagree with you from the right and the left. And you know, Paul Ryan has quite a few things in his record that cannot be described as conservative positions. Whether it’s labor unions, whether it’s control -- local control of education -- I think he was for No Child Left Behind. You go through a whole list of those things, and clearly he’s received plenty of conservative criticism for those votes. And here we are – Medicare Part D, he talked about entitlement reform and he voted for the biggest Republican entitlement expansion in the history of this country. And there’s nothing conservative about that.

So I don’t think it’s anything new. But when you try to convince people something’s better than it is, you tend to embellish and try to sell it. But that’s what’s different about this, because the speaker is usually one to call a crap sandwich a crap sandwich. He used a different word for that, I think, in which -- I do not care to use that language.

But this one is still as bad as some of the other things they’ve done in December, perhaps worse. And now they’re trying to tell us it’s a good thing, which -- it’s clearly not consistent with conservative principles. And it’s clearly not a deficit reduction bill, which is probably the biggest hangup for me …

My understanding, hearing from Senate staff and reading that online and from my staff, is Paul Ryan and Patty Murray did put something in this agreement that would further erode the power of the Republican minority in the Senate, by applying the nuclear option to tax increases … I have not heard a good explanation, or any claim from Paul Ryan that that was a good idea. So I don’t know where that came from, and who’s taking credit for that. But this is the deal that leadership did negotiate, which is very favorable to Harry Reid.

So do you see this deal as a “crap sandwich,” then?

I think this deal is an abdication of our conservative principles. Again, this has happened – I’ve only been up here three years. This happens about every December, when they hope the rest of America is not watching. They did that with the payroll tax deal two years ago, they did a fiscal cliff deal a year ago …

They’re hoping everybody will forget this come January. And we’ll see what happens in the Republican conference.

No, it’s -- this is not something we should accept, in my opinion. It’s going to do damage, I think, long-term to the Republican Party. I mean, conservatives have been less than thrilled with the current leadership in Washington, and this just confirms some of the deepest fears about how committed Republicans are to, you know, fiscal restraint.

You know, not even mentioned in this conversation until now is Obamacare. That’s part of it. This just continues Obamacare, not a, nary a word about it. And you know, hopefully we’ll have a discussion on that in the omnibus. But we shall see …

Will you vote for Boehner to be speaker again?

That’s a long ways off. I -- the rumors I’ve heard is that he’s not going to be running for speaker again, that he’s retiring. But I don’t know … So I don’t know if there’s even a vote for him again.

And there’s a lot of rumors circulating about that. You can check elsewhere. I’m not the source of those rumors. I just hear about them.