Abscam, the NSA and the '70s: The real "American Hustle" 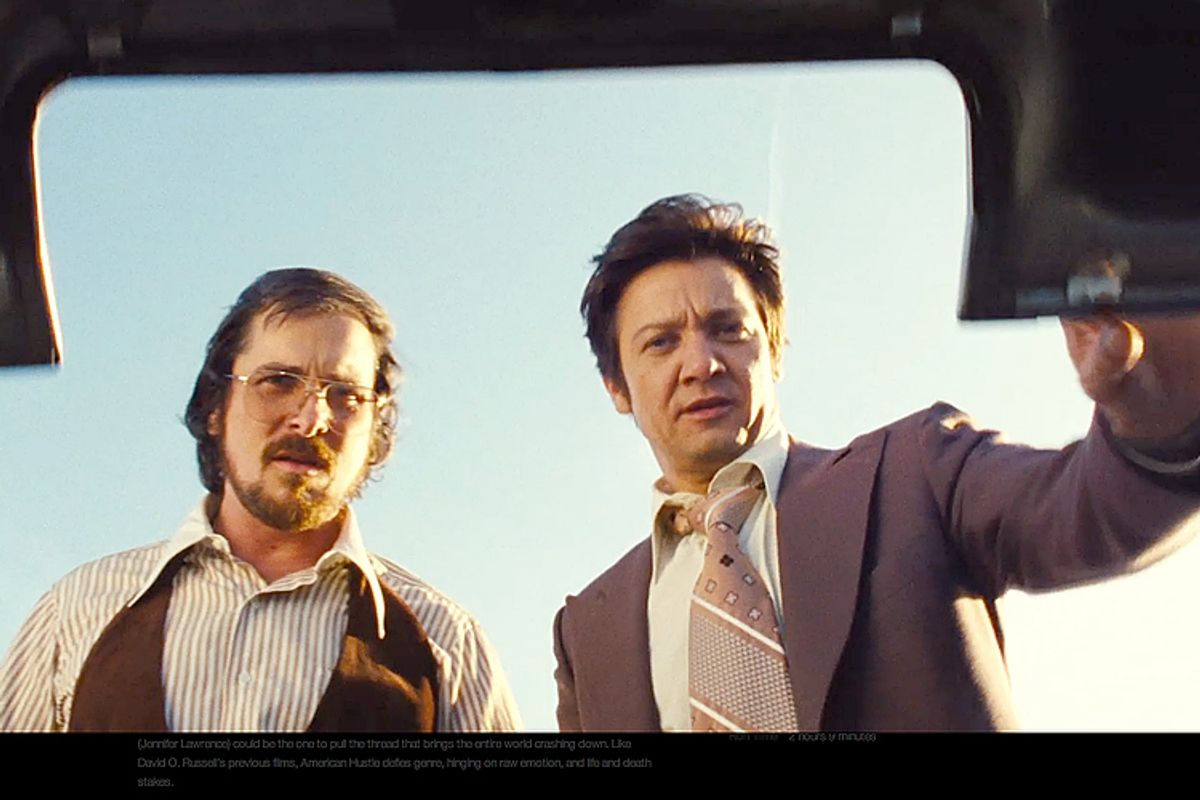 Those who did not personally live through the 1970s may have inherited the notion that the decade was a decadent, nonstop party: Disco, cocaine, flamboyant fashions for people of all genders and the first flowering of gay culture, with punk rock sneaking into the club late to inject a discordant note of nihilism. Some of those hedonistic stereotypes get a lot of play in David O. Russell’s highly enjoyable awards-season favorite “American Hustle,” but beneath the surface other aspects of the ‘70s are visible too. Especially in the wake of the United States’ ignominious retreat from Vietnam, the Watergate scandal and the resignation of Richard Nixon, American life felt like a combination of unmanageable chaos and cultural stagnation.

Inflation and crime rates soared to unprecedented levels — record-high interest rates provide a crucial background to the con-artist career of Christian Bale’s character in the movie — while the nation’s big cities appeared bankrupt, decrepit and ungovernable. (“Ford to City: Drop Dead” howled the New York Daily News, in one of the most famous headlines in tabloid history.) The South Bronx burned on national TV, during a World Series broadcast from Yankee Stadium, and to this day many Americans have the impression that New York City is dirty and dangerous, even with the city’s crime rate near historic lows. For those of us who grew up during that decade, a lot of waiting was involved: Waiting for the man (if you were cool), waiting for hours in a gas line (for me, the OPEC crisis of 1973 will always be associated with my mom’s lemon-yellow ’72 Super Beetle), waiting for years for the Rolling Stones to emerge from their drug haze and make a decent album, waiting for a “Star Trek” rerun you’ve already seen a half-dozen times.

But chaos and stagnation unmistakably have their benefits. For one thing, the suburban boredom of the ‘70s attracted young dissidents into the hollowed-out cities, and produced an artistic, musical and literary revolution with long-lasting and ambiguous effects. That subject has produced its own sociological discipline (e.g., Richard Lloyd’s outstanding “Neo-Bohemia: Art and Commerce in the Post-Industrial City”), but as “American Hustle” should remind us, the political chaos of the ‘70s also drew back the curtain, for a moment or two, on the hidden machineries of American life. Coming shortly after Watergate and the reports of the Church Committee, the Abscam scandal fictionalized in Russell’s movie completed the disillusioning portrait of a government and system that seemed to have become entirely corrupt and cynical. We paid attention, for a little while, and then we didn’t want to anymore. One of the most important lessons to draw from that decade is that we were warned about the corrosive force of money in politics, and about the creation of a national-security state that would be turned against its own citizens, and we actively decided to ignore it.

Watergate showed us a president and his inner circle brought down by their bathetic attempts to cover up what was, in fact, a minor, amateurish and nearly routine act of political subterfuge. Abscam began as a small-scale FBI investigation into white-collar crime on Long Island and then accidentally metastasized into an elaborate undercover sting operation that brought down six congressmen, a U.S. senator and a dozen or so local elected officials in New Jersey and Pennsylvania. (I’ve found no better summary of the whole arcane Abscam saga than Matt Birkbeck’s marvelously detailed article for al-Jazeera America.) No doubt it’s hyperbolic to suggest that Abscam threatened to expose the entire legislative process as a corrupt con, but it kind of felt that way at the time. Most people who go see “American Hustle” will probably never have heard of the scandal before, but it marked the beginning of the widespread contempt for Congress that plays such a big role in public life today.

It was New York con artist Mel Weinberg (the basis for Bale’s Irving Rosenfeld in the movie) who cooked up the idiot-genius notion of using a phony Arab sheik, purportedly from one of the newly rich Gulf states, as a method of funneling briefcases full of cash to politicians, in videotaped meetings, in exchange for various favors: U.S. residency or citizenship, Atlantic City gaming licenses and so on. (In the movie, the FBI dresses up a Mexican-American man as the sheik — which leads to a tense standoff when a mobster questions his authenticity — but in real life it wasn’t quite that bad. They found an agent of Lebanese ancestry who spoke some Arabic.) Almost every politician they approached, from the Philadelphia City Council up to the U.S. Senate, took the bribes. As Rep. Ozzie Myers, a legendary South Philadelphia machine Democrat, put it while he was stuffing $50,000 into his blazer, “In this town, money talks and bullshit walks.”

One of the few who declined the money, Sen. Larry Pressler, R-S.D., was described by Walter Cronkite as a hero and observed, “What have we come to if turning down a bribe is heroic?” To this day, right-wing partisans often characterize Abscam as exclusively a Northeastern and/or Democratic scandal (only one of the seven convicted members of Congress, Florida’s Richard Kelly, was a Republican), and cite Pressler as an avatar of GOP rectitude. But given how avidly the entire congressional hierarchy of both parties tried to limit the Abscam damage and portray the FBI as an agency out of control that had hired a convicted swindler to entrap hardworking lawmakers, it seems likelier that most Capitol Hill insiders saw Pressler as a prairie rube who didn’t know when to keep his mouth shut and failed to appreciate the deep wisdom of the Ozzie Myers koan. Birkbeck quotes former FBI assistant director Bud Mullen, explaining that he was new to the world of Washington politics at the time: “I naively thought Congress wanted to get rid of the bad apples. Boy, was I wrong.”

Curiously enough, Congress was able to counterattack so effectively against Abscam and the FBI, and insist on new Department of Justice guidelines that made it much more difficult to investigate official corruption, because of a different set of revelations about official evil. I refer to the 14 reports published in 1975 and 1976 — the immediate aftermath of Watergate — by Sen. Frank Church’s Select Committee to Study Governmental Operations With Respect to Intelligence Activities, which amount to a nearly unique sunshine moment in the history of representative democracy. Could anything akin to the Church Committee’s investigation happen today, in the era of Chelsea Manning and Edward Snowden? Let’s put it this way: It’s about as likely as Idaho, one of the reddest states in the nation, repeatedly electing a progressive, environmentalist Democrat like Frank Church.

In fact, when you look at the 11 senators on the Church Committee, at least nine of them would be considered left-wingers by the Beltway standards of the 21st century. (The one actual conservative was Sen. John Tower of Texas, who was pro-choice and would only barely count as a Republican today. I don't know how to count Barry Goldwater, who was midway through his journey from right-wing demigod to libertarian.) I’m not sure whether it’s better or worse, for narrative purposes, that no one involved with the Church Committee was implicated in Abscam. The committee was formed after former U.S. Army intelligence analyst Christopher Pyle revealed the existence of a broad-based domestic spy program focused on American dissidents, and after investigative journalist Seymour Hersh began to explore the CIA’s overseas covert action programs. Its eventual reports, many of which were originally classified, amount to more than 50,000 pages of the most serious and far-reaching attempt to make sense of the origins, operation and abuses of the various U.S. government intelligence agencies.

At the time, the Church Committee reports were most famous for their explosive revelations about the CIA’s efforts to assassinate various foreign leaders, including Fidel Castro, Congolese independence leader Patrice Lumumba, Dominican dictator Rafael Trujillo and others. (The CIA had also authorized the recent coup against Chilean president Salvador Allende, of course, but that did not become clear until later.) But from four decades’ distance, those scurrilous enterprises look like bits and pieces of Cold War skulduggery, much less important than the committee’s tantalizing hints about the National Security Agency, which was then an entity so shadowy and secretive that almost no Americans had ever heard of it. In August of 1975, Church himself went on “Meet the Press” and talked about the nefarious potential of the NSA, without ever, like the enemies of Voldemort, daring to utter its name:

In the need to develop a capacity to know what potential enemies are doing, the United States government has perfected a technological capability that enables us to monitor the messages that go through the air … We must know, at the same time, that capability at any time could be turned around on the American people, and no American would have any privacy left, such is the capability to monitor everything — telephone conversations, telegrams, it doesn’t matter. There would be no place to hide. If this government ever became a tyrant, if a dictator ever took charge in this country, the technological capacity that the intelligence community has given the government could enable it to impose total tyranny, and there would be no way to fight back because the most careful effort to combine together in resistance to the government, no matter how privately it was done, is within the reach of the government to know. Such is the capability of this technology.

So it’s no good claiming we weren’t warned. Noted intelligence expert Bing Crosby described the committee’s activities as anti-American and pro-Communist at the time, and in the wake of 9/11, security-state advocates have repeatedly blamed the committee and the reforms it sparked for “crippling” American intelligence. As the Guardian reported earlier this year, Church himself, along with Republican committee member Howard Baker, was among the 1,650 American citizens targeted by Operation Minaret, a clandestine and illegal NSA surveillance program. When the secret police showed us, almost entirely by accident, that Congress was a bunch of crooks, we looked the other way. When Congress had a rare moment of bravery and showed us that the secret police had acquired a terrifying and unprecedented level of technological mastery, we looked the other way. Now we’re stuck with the crooks and the spooks, and have no place left to look except the mirror.