Would Rand Paul be another George Bush?

"Days of Fire" author Peter Baker talks to Salon about the Iraq war, and how the GOP has changed 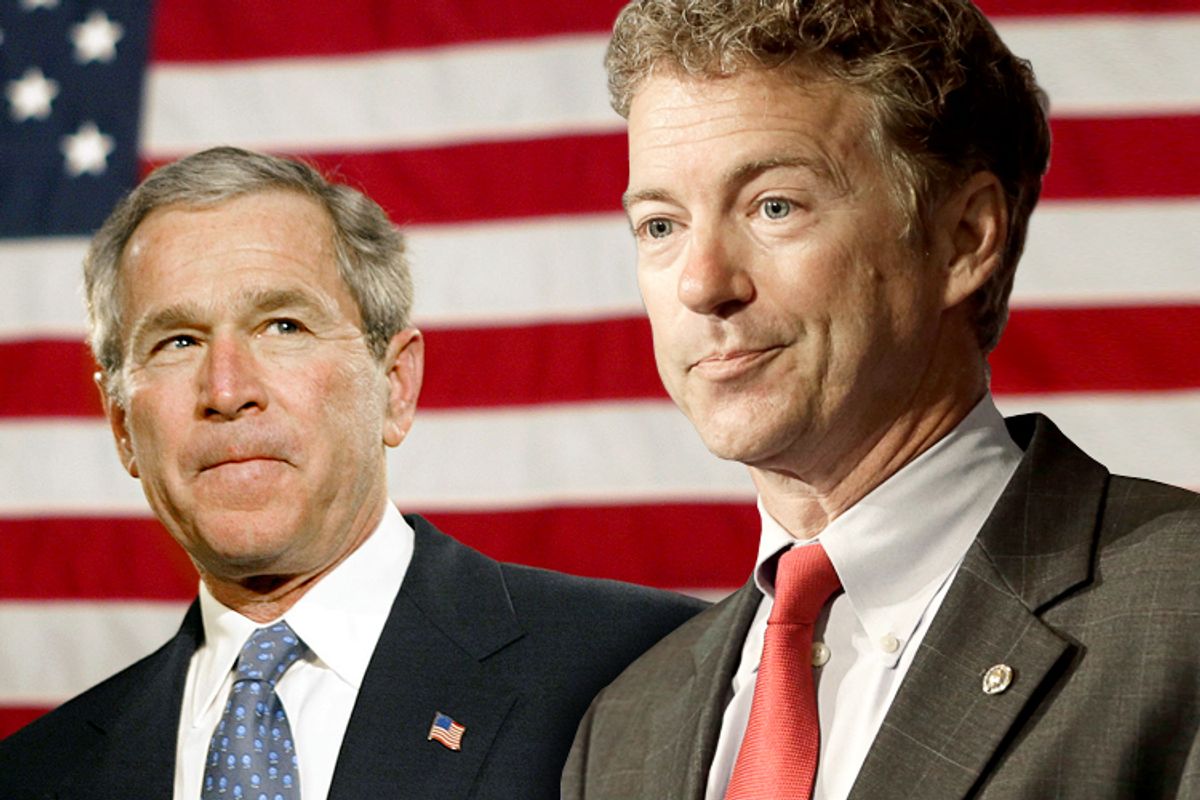 On Jan. 30, 2001, ten days after his inauguration, President George W. Bush convened the first meeting of his National Security Council in the White House Situation Room. The first order of business was a discussion of Arab-Israeli peace negotiations.

The second order of business was Iraq.

“Why are we even bothering with sanctions?” Defense Secretary Donald Rumsfeld responded to Secretary of State Colin Powell’s suggestion that the administration strengthen economic sanctions against Iraq, which was in violation of U.N. resolutions intended to prevent Iraq from developing atomic, chemical and biological weapons.

Peter Baker recounts the exchange in his new book, “Days of Fire: Bush and Cheney in the White House,” which depicts a Bush administration preoccupied with Iraq from its earliest days. Baker, the Times’ chief White House correspondent, spoke to me by phone from his desk at the paper’s Washington bureau.

Iraq was really the point of the first meeting of the National Security Council. The Bush administration was thinking about invading Iraq long before 9/11. Did you set out to find the "real" reason for invading Iraq?

I did want to find out the thinking about Iraq. That was the single biggest, most consequential decision he makes during his presidency. How they came to that moment is something we’re going to be exploring and debating and reexamining for years to come. I think what [the book] shows is that the invasion was not always preordained but that they came in with Iraq as the central focus of their national security. Saddam Hussein was their No. 1 threat, in effect.

I don’t think they were necessarily talking about war at that point. Regime change was definitely on the table — that had been the policy Clinton had signed and Congress had passed — but at that point there was no appetite by the public to send American troops. They were looking at what they could do to further squeeze [Saddam] through sanctions, through covert acts perhaps, through all sorts of different possibilities, but I don’t think they were thinking about the full-on invasion that we ultimately had.

Did you come to any conclusions or realizations about who drove the decisions or whether the bases for the invasion were different than the ones that were offered at the time?

It’s a mix of things. It’s never as simple as a single reason. Did President Bush’s father’s experience with Iraq play a part? Obviously that’s part of it. Was it the main thing? That’s overstating it. How much did Cheney’s experience having been in the [George H.W.] Bush administration as secretary of defense during the Gulf War shape this? That’s where he comes from. So these things are the context from which people are making decisions.

I found an oral history that Cheney had given just before he joined the ticket in 2000 that was sealed until he left office, so nobody had really ever seen it. In 2000, he defends the idea of not going all the way to Baghdad, as they didn’t in 1991. He thought it would have been a mistake. By the end of 2001, his thinking had changed. His calculations were different. His calculation of the risks involved, his calculation of what’s possible as far as the American public — all of that has changed by that point. It’s an interesting, developing process.

When you staff your State Department and your Defense Department with a bunch of neocons, the advice you get is going to be hawkish.

Yep, no question. But they’re also pushing on an open door. That’s where Bush’s head was. That’s one of the things we may over-interpret -- how much other people were making decisions. Cheney was in two previous administrations, but Bush 41 and 43 were different presidents with different philosophies.

You said in the acknowledgments that President Bush had declined to talk for the book but that he did not discourage people from his administration from talking to you. Was there anyone you didn’t get to talk to?

Just to be clear: He wasn’t encouraging people at the beginning. Over time, he was less vigorous in discouraging people. It took some people 20, 30 months to actually agree to sit down and talk to me. I suspect that’s because over time he came around to the idea that he wasn’t going to stand in the way if people wanted to talk to me.

At any rate, as far as the national security side, I got most of who I really wanted. I would have liked to have had the president, but we got Cheney, Colin Powell, Condi Rice, Don Rumsfeld, Steve Hadley, David Petraeus, lots of the other generals, and so on. There are a few people who were not on the record, but most people I talked to were, which added to the value of the record.

Have you seen the neocons from the administration recasting? What’s their current conventional wisdom on what the point of Iraq was?

You get different stories. Some of them, like Richard Perle, will tell you, “Don’t blame me for this. I thought going in was a good idea, but how could I have known they would screw it up so badly?” Those are the people saying the idea wasn’t bad, that it was the execution. And there are some others who now think that the idea itself was not as sound as it should have been. Ken Adelman, for instance, had a very different way of looking at it today than some of the people who he shared views with at the time.

For those who are still supporters of the effort, there are a variety of views. Some say that the argument getting boiled down to weapons undercut their case. When Powell went to the U.N., Cheney hands him a packet of information with three main points — terrorism and human rights being the other two — but Powell says, “Let’s pare this down to the weapons because that’s the part the U.N. has weighed in on. That’s the part where we have the strongest case in terms of international support.” The second guessing after the fact is that if they had made the case broader than weapons, it wouldn’t have looked so bad.

But we wouldn’t have gone to Iraq without that component.

That’s the interesting debate, right? Ari Fleischer and Karl Rove agree with that. They both say they don’t think the president would have gone in had he not believed that there were weapons there. Some others disagreed. Don Rumsfeld, I interviewed, said that he thought they might still have gone in anyway. Certainly, the weapons were critical as far as the president’s decision and the public’s appetite for doing it.

It goes to the point you made in the book about George Tenet saying you can’t serve as an honest broker of intelligence and an advisor at the same time — particularly when you’ve got the vice president looking for evidence to support the outcome he wanted. Was that a problem? The advice the president got was the advice he was seeking.

Tenet was put in the position — or put himself in the position, depending on how you look at it — that very few CIA directors have been in in modern times. He was a cross between dispenser of impartial information and an inner-circle member of the policy team. We’re going to forever be looking at that period for how did they get that wrong. There will always be people who will suggest foul motives, and that’s something Bush will have to live with in terms of history.

Have you seen that same aggression that’s sort of a required component of preemptive war in the way Iran has unfolded in the last few weeks? I would have thought they wouldn’t be so aggressive this time, but they sound exactly like they did 10 years ago.

There certainly are some people who feel strongly about Iran in not too different a way than they felt about Iraq. You’re right. Certainly, the country isn’t there. The polls show there’s more support for military action with Iran than there was, for instance, with Syria, which is interesting given that Syria actually used the weapons. There’s a huge hangover, still. People don’t trust intelligence even when it seems clear — much clearer than they had 10 years ago. There’s such a feeling of being burned.

Have you seen the likely serious Republican candidates for 2016 and the foreign policy people that you would expect to see around them taking positions about preemptive war — enunciating what a Republican president’s foreign policy would be in 2016, 2017?

That’s a good question. It’s a little early. It will be an interesting race. If you have Rand Paul or somebody like Rand Paul run, they’ll have a very different point of view within the Republican Party than that that governed during the Bush-Cheney era.

Much less likely to go looking for someone to hit?

Much more restrained in the use of American power abroad. Much less eager to police other parts of the world. Rand Paul has begun to transcend the libertarian corner. Whether he can pull the whole party that way, I don’t know. Is it still a party of national security hawks, or is it a party of libertarian, stay-within-our-shores kind of thinking, and is there anyone who can straddle the shores of those two camps right now?

If foreign policy suddenly becomes a very important factor in the 2016 Republican primary, who besides Condi Rice has those bona fides? Bob Corker? Anyone?

Condi Rice and Bob Corker obviously would both be able to point to foreign policy credentials, though it doesn't seem like either is likely to run. Since many of the leading Republicans at the moment are governors, there's a good chance the next nominee won't have a strong background in national security or foreign policy.