The Beyoncé wars: Should she get to be a feminist?

We are not always equipped to deal with black women’s burned and bruised places. Bey invites us to show our scars 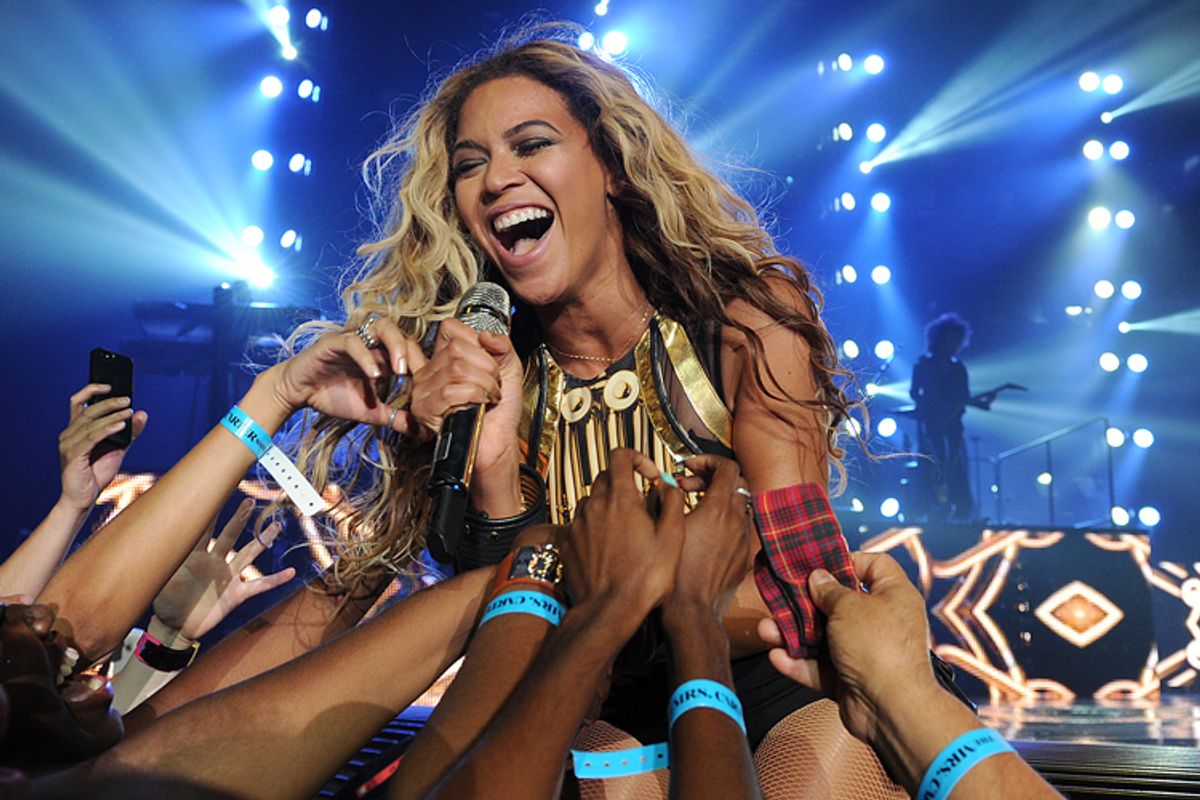 Since I woke up on Friday morning to the news that Beyoncé stealth dropped a new album – the self-titled "Beyoncé" — after the "Scandal" winter finale on Thursday night, I have been involved in endless debates about Bey’s right to self-identify as a feminist.

Black women’s emotional responses to Beyoncé’s latest declaration of feminism are akin to white feminists’ reactions to Sheryl Sandberg’s invocation of feminism in "Lean In" earlier this year.

Since I’m all the way here for Bey identifying as a feminist, I must admit I’ve been taken aback by the sisters who seriously can’t stand Beyoncé. General lack of interest because her work doesn’t move you is one thing. But these sisters have been going hard in the paint about all the ways that Beyoncé’s pop star status, riches and husband with dubious politics (think: Barneys) make her a patron of the patriarchy.

As only black women can, we (yep, me included) have been throwing all manner of eloquently written, righteously indignant shade at each other (y’all should see my Facebook wall), asserting on the one hand that the Bey-haters are the stuffy denizens of respectability policing and declaring on the other that the Bey-hivers are uncritical embracers of a woman with deeply contradictory practices and politics.

I wish I could say that my initial inclination was to embrace this plethora of reactions to Beyoncé as good for black feminism. But actually I really wanted to stage a written takedown of all the haters. No Vaseline.

I know, I know. I don’t do well with the internecine kinds of vitriol and criticism that black women inflict on each other, in the name of critique and truth-telling. I’ve witnessed our vehement criticism of everyone from Oprah to Beyoncé, to the fictional Olivia Pope. So that’s the thing about this debate about Bey’s feminism. For all the intellectual posturing that frames it, our investment in whether Beyoncé gets to be a feminist or not is deeply personal and emotional.

The personal, we keep learning, is political.

To be clear, I don’t want to suggest that black women are overly emotional and therefore incapable of legitimate, critical and rigorous engagement with Beyoncé’s art and politics. We are absolutely capable of it, and frankly, I’m glad our forms of intellectual engagement are not dispassionate paeans to objectivity. We have some skin in this game and we own it.

Whenever we would get scars as children, my grandmother would break off a stalk of the aloe vera plant she grew, squeeze out the gel, make us hold out our arms and legs and then gently, but firmly knead the healing gel into our broken, burned and bruised places.

It occurred to me after a sister friend staged a “DON’T Eat the Cake, Anna Mae” intervention for me as I talked over writing this piece with her that we are culturally ill-equipped to deal with black women’s broken, burned and bruised places.

To be clear, much of the vitriolic responses to Beyoncé (and Oprah and Olivia Pope) come from these places. Unhealed scars have us choreographing all manner of moves to make sure those places don’t get touched, that the injuries don’t get aggravated.

We don’t trust each other. But we need each other so much. That’s a scary place to be. And in comes Beyoncé, ripping off the band-aids to wounds that we have become conditioned to avoid rather than to confront and to heal. When she invites us to say FTW, “I woke up like this,” she invites black female vulnerability into the picture. It is an invitation to whip out our arms and legs and hearts, to flex, to stunt, to revel in our flawlessness. And to show our scars. It requires trust.

If you are an incessantly single professional black woman who is living out the realities of those statistics that are merely news fodder for everyone else, it is hard (if you’re straight and/or into masculine-identified folks) not to watch Beyoncé embracing her hubby around the neck on the video for "Drunk in Love," without longing for that kind of touch in your own life. If you’re a 30-something feeling the pull of your biological clock, the video “Blue” featuring a laughing and ebullient Blue Ivy will make your ovaries scream. If you’re a dark-skinned black woman with a certain kind of fraught history with light-skinned black women, the video for "Pretty Hurts," and the kind of empathy that it urges for light-skinned Beyoncé might just be rage-inducing. And if you are particularly sensitive to the ways that black women come for each other, then hearing Beyoncé instruct bitches to bow down, might just take you over the top.

Beyoncé means a lot to us. She triggers a lot for us: about desire and beauty and skin color politics and access and being chosen and being the cool kid. Because representations of black female subjectivity are so paltry in pop culture, the mainstream doesn’t know that we struggle with this kinda shit, too. Nerdy girls resent the popular pretty girls. We grow up to become feminists who are beautiful in our own right, to critique patriarchy and challenge desire. And we have a sort of smugness that says, the pretty girl who gets the guy can have all that, but she can’t be radical. That Beyoncé would even want to means she has stepped out of her lane, and lanes matter greatly.

How do we make space for black women’s awe and admiration and jealousy and desire and fear? How do we acknowledge that we have spent so much time debating whether she gets to be a feminist because the power to say who is in and who is out is in fact power? And in a world where it seems black women rarely can have it all, determining who gets to do and to have, matters.

Look, this isn’t an objective assessment. I’m in my feelings, too, if you can’t already tell. In one moment I choose to ignore the Vaseline. In another I embrace the aloe vera. But I see black women moving through this thing, hearts on our sleeves, and I’m trying to make space for us to all be here together, working this shit out, Beyoncé stans, haters and everybody in-between. Linked fate is real and we are in this together.

So as a peace offering in the midst of the fiery conversations that will go forth, I invoke the words of Erykah Badu: “Hearts led. Baby, it’s your deal.”