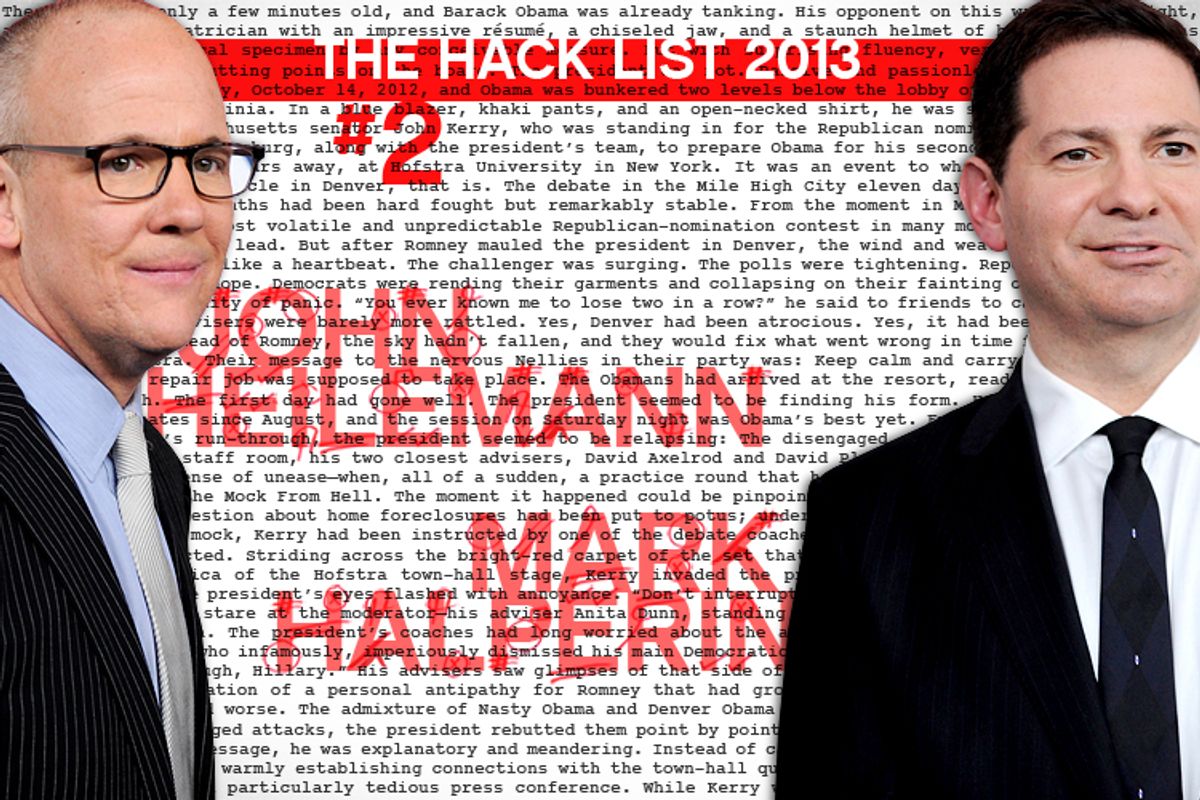 A sleek black town car dropped off its passenger and sped off into the brisk, sun-drenched, bone-cold autumn afternoon. It was November 6, 2012, and Mark Halperin was headed to John Heilemann's Williamsburg, Brooklyn, loft to coordinate and strategize the writing of their follow-up to their surprise smash hit book, "Game Change." "Game Change" had changed the game for political reporting. The duo knew they'd need to pull another game-changer out of their collective hat yet again. They'd need a new central metaphor. And, they feared, a better election.

A day earlier, President Barack Obama had won reelection (Good, Obama thought), beating gaffe-prone former Massachusetts governor Mitt Romney (That's a real shame, thought Romney), and now the "Game Change" boys would have to write a book about it. But the campaign had been predictable. Both candidates were already known quantities and each had insisted on keeping the game the way it was. Even the voters had decided to stick with the existing game.

"Well," Heilemann asked Halperin, "what will we call the book?" Halperin was dumbfounded and blindsided. I thought we were going to call it "Game Change 2," he said. You mean we have to come up with another phrase? The fate of the book, and the fates of both men's careers, depended on this decision. The wrong title could sink the whole project. Bookstores might all go out of business. Literacy rates could plummet to zero. The two might literally die. Everything depended on getting the title of the book right, Halperin knew.

Suddenly, he remembered something: A sandwich, with chicken instead of bread. He had seen an ad for it on MSNBC not long ago. "John, I've got it. Double down. We'll call it 'Game Change 2: Doubling Down on Game-Changing.'"

Heilemann hated it. It doesn't make any sense, he said. "Double down" means a specific thing, to double a blackjack bet and take another card. Figuratively it means "take a risk." Weren't both campaigns incredibly cautious and allergic to risk? Didn't political reporters like us create an environment in which every single dumb thing anyone even tangentially connected to any campaign said became a four-day-long "gaffe" story, forcing everyone involved to make the entire presidential race even more of a series of rehearsed and scripted pseudo-events than it already had been?

Halperin doubled down. What game, in the end, had anyone actually changed in "Game Change"? He won out. But there'd be one final compromise: The book would be called "Double Down: Game Change 2012." They had a name. Now, they just needed to come up with some good nicknames for all the candidates.

On a cold, sunless night on December 11, in a booth at an Upper West Side diner, the Game Changers game-planned. The book wouldn't necessarily be harder to write. Heilemann knew that neither of them was much of a prose stylist, and all they really had to do was write down what they'd persuaded people to tell them, not explain what it meant. Heilemann knew also that they wouldn't have much trouble getting people to talk either, because everyone knew if you didn't talk to them, you might end up under the bus alongside the McCain strategists who weren't Steve Schmidt. (If we don't put quotation marks around quotes we can attribute them to people without having to be super careful about getting them right. Works for Woodward.) Heilemann knew all of that, and he knew that if it came down to it they could double down on their best trick, naming the speakers of off-the-record quotes, and playing hardball if they balked. But he also knew that unless there was going to be a surprise recount naming Sarah Palin the write-in winner of the 2012 presidential election, they didn't have a movie.

Halperin wasn't as worried. They had a great Republican primary to fall back on. They had Michele Bachmann. That's a good, juicy part. Play up the crazy stuff. Everyone likes a crazy broad. Remember Liz Edwards? Boy, we did a number on her. That was great. I bet someone will say some real mean stuff about Callista this time, don't you think?

But Heilemann knew that the general election provided thin gruel. Romney's campaign had been feckless but not a disaster. Obama's worst misstep was one sleepy debate performance. The result could've been predicted a year in advance. In fact, some people had predicted it a year in advance, with some nonsense about economic trends and approval ratings.

Halperin didn't buy it. It all came down to gaffes, flubs, game changes and arguments between low-level staffers about ads that would run in a few media markets four months before the election. Though even he had to admit that the game had changed. Twitter was doubling down on every gaffe. And there was the freak show. Him and John had a comfortable rapport, and a lucrative partnership. But they knew it was precarious. If they didn't get it right again, the second time, there might not be movie rights to sell the next time, in 2016.

"I still can't fucking believe that uptight shitheel Romney didn't pick Christie," Heilemann shouted, pounding his fist down on the table for emphasis. "Motherfucker!" He woulda been "Double Down's" Palin, Heilmann said. We could've gotten John Goodman to play him. We'll be lucky to get Josh Radnor for Ryan. No one's gonna win a Golden Globe for playing Ann Romney!

Halperin did his best at damage control. That's not our problem. It's Danny Strong's. Twenty-five percent of "Game Change's" running-time was "SNL" sketches played on TVs, and he based the rest of the movie on a book that we didn't even write. He'll find a way to pad it. Heilemann wasn't completely satisfied, but he knew he already had all the money and they would not take it away from him if the movie turned out terrible.

There's only one thing we can do, Halperin said. It's our only choice, and it's the best choice. We're going to double down.

30 Rock was buzzing on July 16, 2013. Outside it was sweltering and sweat-drenched, but in the "Morning Joe" green room the temperature was a refreshing 60 degrees Fahrenheit, as it always was before showtime, to keep the famously cold-blooded but hot-tempered alien lizard person Scarborough in a sluggish semi-torpor before the lights of the studio warmed him up enough to drive the Washington conversation.

Halperin barely noticed the chill. The book had hit him like a 600 ton shitpile of bricks. Maybe Heilemann was happy being a mere magazine writer, famous to intellectuals and eggheads, but Halperin had a reputation for ubiquity and access to protect, and he was always looking over his shoulder at Mike Allen. I'M BARELY FUCKING IN "THIS TOWN," JOHN, he thought. Four mentions, and most of them are about how the Obamas ignore me. Allen's in every goddamn chapter!

A little more than 200 miles away, in America's marbled capital, Mike Allen was sitting down to breakfast. I require food, he thought. I will ingest food and my body will convert it into energy so I can write POLITICO PLAYBOOK. PLAYBOOK is my must-read briefing on what's driving the day in Washington. His phone went off. Another text from VandeHei. "IDEA: Deep dive on grand bargain. What do u think?" Allen processed the information as his body continued digesting. I am a famous journalist, he thought. My job is to write news.

Back at the other end of the Acela corridor, Heilemann was on the phone with his publishers. This index was a mess. It only listed five of the seven instances of Romney gaffes he and Mark had painstakingly documented. "Ann drives a couple Cadillacs" and "some of my best friends are NASCAR owners" are two separate gaffes, for chrissake. This is basic stuff. He considered calling Halperin, but decided against it. "I hate that piece of shit Mark Halperin," he said.

Halperin was relieved. "Double Down" had just come out, and lots of people were writing articles about it. The two of them had gone on TV, too, to talk about the book. We did it, he thought. We wrote another book. It was chilly in Midtown Manhattan, but not too chilly, basically sweater weather. Halperin and Heilemann were riding high, but there was going to be another presidential election in a few years. If they wanted to continue getting paid millions of dollars for campaign books, they only had one choice. They'd have to double down on game changing.