The "real" Santa: Sometimes it's a woman!

Megyn Kelly might be surprised -- growing up, the person who did the real work of Santa in our house was my mother 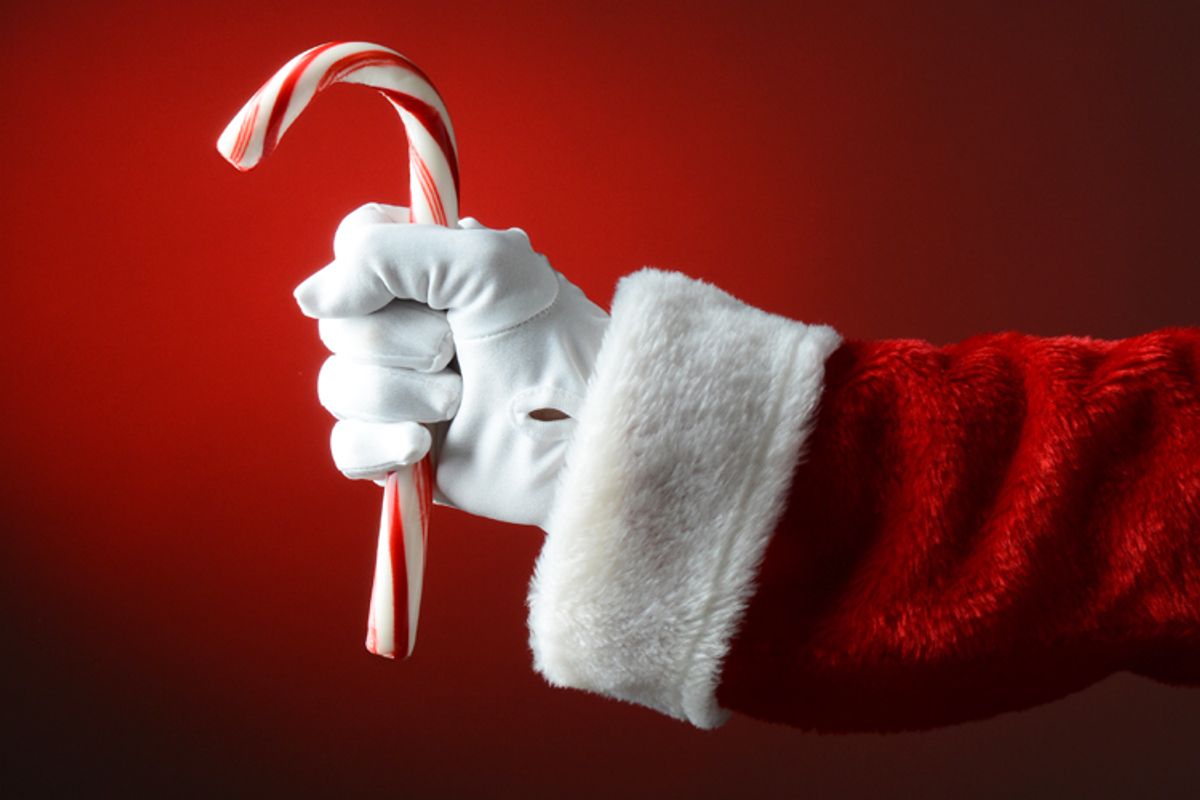 Last week, Fox commentator Megyn Kelly caused a ripple in the holiday universe when she pointedly announced that Santa was a real white man.  Kelly was responding to Aisha Harris’ Slate article, "Santa Claus Should Not Be a White Man Anymore," in which she wrote about what it felt like for her, as a young girl, to navigate positive messages about African-American identity when mainstream messages rendered her, by virtue of race, invisible.  Entirely missing the point, indeed amplifying it, Kelly balked at even the idea that Santa could be anything other than an Anglo Saxon man. Like Jesus. Like millions of others, I shook my head firmly to clear it.

Lots of people have effectively and cheekily addressed Kelly’s skewed reasoning so I’m not going to spend any more time doing the same here.  However, Harris and Kelly made me think of Santa’s realness and representation, and the lessons children derive from them.  When it comes to Santa, the most “real” thing about him is millions of parents, often but not always mothers, who quietly work away into the wee hours, tiptoeing in darkened rooms so Santa can get everything done before daybreak (no spoilers here).

Almost every Santa I remember seeing in my childhood, growing up in a British colony as it went through independence, was a black man. When I was 6, my first memory of seeing the real Santa, my mother took my younger brother and me to a local department store, so we could sit on Santa’s lap and tell him if we’d been good and what we wanted. When we got there, there was a huge, loud, squirming crowd of children, so thick that you could barely move.  Santa was on a podium and I stared at him intently, overawed and intimidated by the noise and people. He was, indeed, rotund, white-bearded, red-suited and bright-eyed. And brown-skinned.

As we stood there, I was consumed with worry for my brother, because he was a mischief-maker and I was trying to figure out if I could ask Santa two things, in case he got none.  It wasn’t entirely selfless: I didn’t want him to be sad, but I also I didn’t want to be made to share.  I stood quietly off to the side of the crowd, dying inside because I was sure I would never get to the front of what didn’t look as much like a line as a rugby scrum. Then, to my surprise, Santa waved me forward and the sea of children parted. After a split-second of wanting to sink into the ground in panic, I grabbed my brother’s hand and pulled him with me up the stairs.  He and I sat together on Santa’s lap and talked to him as a photographer snapped our Christmas picture. We were giddy the entire ride home.

My mother made every single Christmas of my childhood the happiest imaginable. Given my parents' traditional division of labor, I know that my father was important, but in a different way.  It wasn’t a matter of money, but of love and care.

Where we lived was the opposite of the North Pole in every way imaginable: a small, very hot island. Despite this, during the holidays, we wore sweaters, draped our tree in “icicles,” and drank hot chocolate with extra marshmallows. One year, my imp brother hid on our roof and pelted me with ice, convincing me – I ran around yelling “Snow!!” -- to his enduring glee (still), that finally we would have a white Christmas.  We made ornaments out of the tops of silver deodorant cans and green and red tape, ate peppermint sticks and every year made 50-plus pounds of dense, Scottish fruitcake and a Christmas pudding with rum-filled hard sauce.

On Christmas Eve we almost always put on footed pajamas festooned with bells or wreaths or ribbons, and draped pillow cases on the ends of our beds. Who needs stockings, which no one had, when pillowcases are so much roomier.  The fact that we did not have a chimney was irrelevant. We had a tree that grew, actually really grew, through our living room.  Eccentric, to be sure, but I figured when I was a child that it might be useful for tying reindeer to.  And we had Santa. He was magic -- and, like the people around me, he could be many shades.

My mother tucked us in with whispers and we fell asleep listening for reindeer bells, making sure not to confuse them with the sounds of our father getting home, always very late on Christmas Eve. Occasionally, she’d tiptoe into the room to say she’d heard bells and we had to fall asleep right away or risk seeing him, a big no-no, the thought of which made my heart madly race.  On Christmas morning, when we woke up, way before the sun rose, my mother was almost as excited as we were, although I know now she’d actually slept a small fraction of the time that my father or we did, if she’d slept at all. She’d nibbled cookies and sipped tepid milk, even when, I’m pretty sure, she really didn’t want to.

Santa was one thing, in a chaotic life, that my mother had complete and utter control over. And Santa was perfect. It wasn’t until I had my own small children that I fully realized how much time, effort and thoughtfulness my mother put into making sure that Santa Claus was so amazing and that Christmas was fantastical. She worked for weeks, even months, making certain that he knew exactly what each of us wanted most in the world, even some things that we didn’t even know we wanted.

My mother understood that Christmas and Santa are, first and foremost, ideas.

What some people are unwilling to digest is that while they can see themselves, or specific prioritized aspects of themselves, everywhere in culture, they obstinately deny others the exact same right. That is an injustice that perpetuates itself. But what is also true is that they cannot even imagine what it is like to admire and love people who don’t look like them. People of other colors.  People of other genders.  People of other sexes. That is a sad and small reality.

Given the way childcare is still distributed, most of the time, women and mothers are doing the invisible work that Santa relies on to get through his busy night.  If there is one thing for sure, Santa will not be a small, brown woman for some time to come. This self-erasure is poignant, and not an entirely positive lesson.  Given the history of the United States in particular, the darker a parent, the more poignant the erasure.  However, it is a testament of the purest kind of love. The rank parsimony of insisting on Santa’s whiteness with such vehemence is an ironic way to defend the idea of selfless giving.

I am truly grateful that Aisha Harris wrote about her Santa Clauses. Every time we have these conversations, more people hear them.  I can only imagine what Megyn Kelly would have said if Slate's headline had been, “Time for Santa to rest. Mrs. Claus can take the reins.”