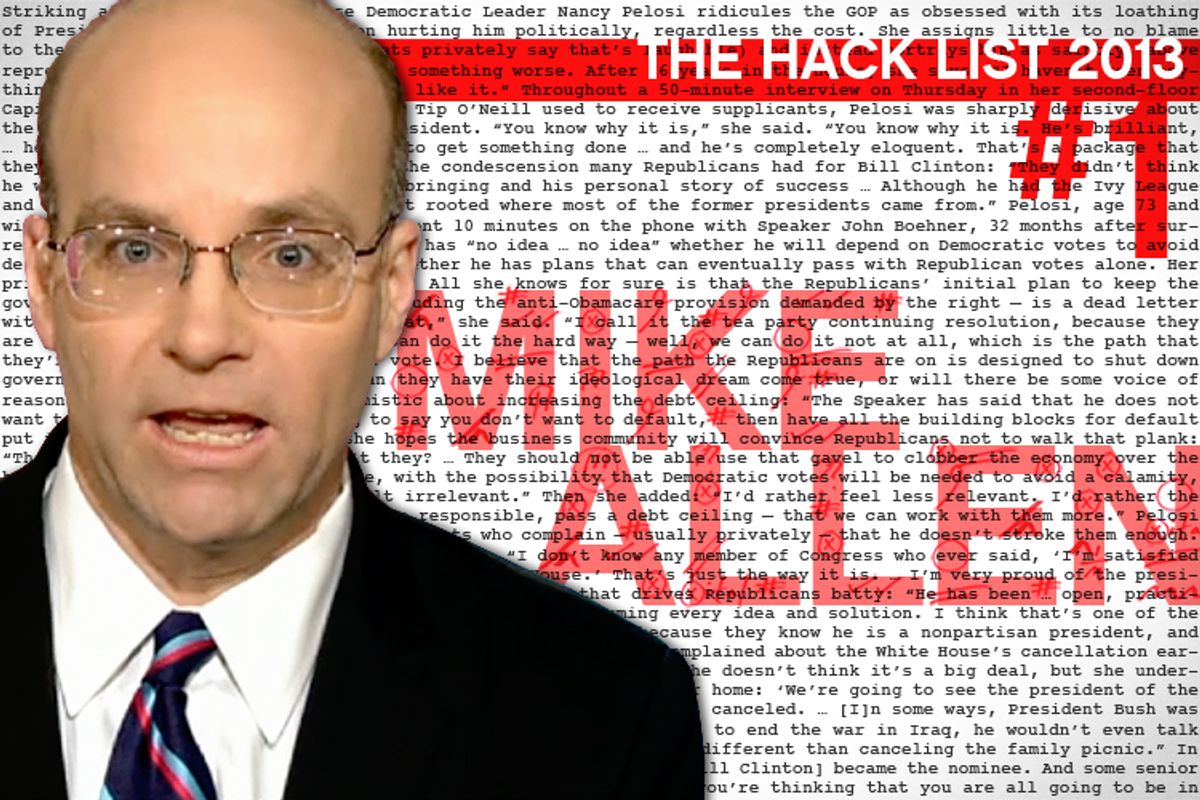 PAYOLA-BOOK: No professional blowback for sponsor-fluffing Mike Allen -- LEIBO on ALLEN: 'enabler' -- Business lobby agenda pushed daily -- "Beyond parody" -- Something about JOE SCARBOROUGH for some reason

EXCLUSIVE -- "Mike Allen is the biggest hack in the country, by Alex Pareene: "Mike Allen, Politico's superstar email newsletter author, has never been anyone's idea of a hard-charging, truth-to-power journalist, but as he's built PLAYBOOK into an elite Washington institution, he's become effectively indistinguishable from a paid advocate for business interests. ... He promotes causes favored by wealthy corporate executives, promotes the nonprofits and PACs and interest groups those executives fund, and promotes the politicians who agree with the corporate agenda. And he does all of this each day in the guise of a simple emailed tipsheet of links to major political news stories.

TOP TALKER: "Politico's Mike Allen, Native Advertising Pioneer," by Erik Wemple: "Politico’s archives yield plenty of examples of Allen going to bat for the site’s advertisers. Turning up examples of hard-nosed pieces on these companies and special interests is a more complicated undertaking….As for outright negative stuff on these organizations, that tends to be harder to dig up. We spent hours searching for such examples and even deployed an outside researcher for further bandwidth; we also asked Politico to send examples wherein Allen takes a harsh view of their agenda. They declined."

"...So enticing is the prospect of dumping an announcement in the loving hands of Mike Allen that many PR types around town have gone around beat reporters at Politico in search of a little plug in 'Playbook' ... Notes one former staffer via e-mail: 'Reporters are sometimes annoyed to find scooplets from their beats at the top of Playbook. Sources give stuff to Mike Allen because they know he’ll reach a huge audience, usually more people than the beat reporters would reach with their own stories. And they know he’ll play it totally straight, not letting any dissenting voices muddy up whatever PR the source is trying to get out.'" http://goo.gl/V1f5nN

A QUOTE OF A HUGE PORTION OF ANOTHER OUTLET'S ARTICLE PASTED INTO AN EMAIL NEWSLETTER UNDER THE ASSUMPTION THAT READERS WON'T FOLLOW THE LINK AS THEY WILL BE PRETTY SURE THEY GOT THE GIST OF IT: "Now, one possible defense of Allen is that what appears to be simple payola is actually a more sociologically complex phenomenon. Allen, as Wemple reports, has personal friendships with many of his sponsors, uses them as sources, and generally shares their point of view on most issues even while failing to acknowledge he has a point of view at all. This is less a defense than a concession that Allen is so hopelessly embedded within the Establishment that he can't cover it in a remotely fair way.

"...[Jim] VandeHei's final defense verges on parody: Allen, he argues, has "no business interest" in giving favorable treatment to advertisers. There is the fact that advertisers pay him $35,000 a week, or up to $1.8 million a year. If those clients realize that their paid advertisements also buy them favorable coverage in Playbook, that would make them dramatically more interested in paying Allen's exorbitant rates.

"...[POLITICO'S] strategy of pretending the payola allegations don't exist has worked brilliantly, from a business perspective. Given the reality that Politico has suffered little to no reputation damage from the scandal, it seems like selling favorable coverage, whatever the ethical merits, is in fact a brilliant business strategy." http://goo.gl/lyRfdO

PLAYBOOK FACTS OF LIFE: An intern could do this job. (If you plan to hire an intern to do this job, please pay them, though you needn't pay them as much as POLITICO pays Mike Allen.) One randomly selected edition of POLITICO PLAYBOOK is nearly 3,400 words long. Fewer than 500 of its words were actually written by Mike Allen. The rest is lengthy quotes of other journalists' articles, press releases and ads. There's nothing special about this one in particular; PLAYBOOK often features even less original Allen writing. http://goo.gl/W6sX0c

HOW THE SAUSAGE GETS MADE -- READ A FLACK QUOTED IN A NEWS STORY AND THEN READ THE FLACK'S FULL, UNEDITED STATEMENT IN PLAYBOOK -- “GOP group money down, hints at donor uncertainty,” AP's Thomas Beaumont and Steve Peoples: "'Unlike previous cycles, we won't be sending good money after substandard candidates with weak campaigns,' said Jonathan Collegio, a spokesman for the conservative super political action committee American Crossroads." http://goo.gl/ADHArB

--HERE'S MIKE ALLEN'S DUTIFUL PRINTING OF THE FULL STATEMENT FROM THE SUPER PAC SPOKESMAN IN THAT DAY'S PLAYBOOK: http://goo.gl/I5XSND

--BEHIND THE SCENES: The flack sent Allen the same quote he sent the AP reporters because he knew Allen would share the entire thing, including the self-serving parts that the AP reporters omitted because they don't consider passing along spin from a paid spokesman to be part of their jobs as reporters.

TO TELL YOUR KIDS: Mike Allen is a silly man who lives in a secret den in a funny little town called Washington. His job is to tell all the other silly men that they are very, very important and strong.

MIKE ALLEN'S PLAYBOOK, 9/13/13 -- "FIRST LOOK AT JOE SCARBOROUGH'S NEW BOOK." "EXCLUSIVE – JOE SCARBOROUGH ON HOW THE GOP CAN WIN IN 2016: The 'Morning Joe' host’s new book, 'The Right Path: From Ike to Reagan, How Republicans Once Mastered Politics--and Can Again,' will be published Nov. 12 by Random House, and is edited by JON MEACHAM. The buzz among GOP insiders is that 'The Right Path' has the potential to galvanize conservatives in the way Barry Goldwater's 'Conscience of a Conservative' did half a century ago -- especially conservatives ready to return to the winning ways of Ronald Reagan, who is on the cover, shown striding down the White House colonnade ... See the cover ($16.69 Amazon preorder; $10.99 on Kindle)." http://goo.gl/U17Kbx

COMING ATTRACTIONS: A hypothetical but realistic example of how PLAYBOOK will in the near future hype a column or article advancing the views of a specific business interest: "Officials, lawmakers and CEOs all agree that fracking is the key to unleashing the economy and also very safe and environmentally friendly. … Midway through what began as a description of the viewpoints of CEOs and unnamed officials I will drop the pretense that I don't also share this view. Then I'll quote a spokesman or even an executive from a lobbying group that represents energy companies. … Following that, I'll print 95 percent of a press release from that group, and then I'll promote a forthcoming event or campaign organized by that group. … A bit later, PLAYBOOK will feature some text that looks like this":

***A special message from The American Energy Roundtable. America is in the midst of an energy renaissance, one with absolutely no long-term environmental consequences and one that will assuredly last forever. Here at the American Energy Roundtable, we're committed to investing in the future, and there is absolutely nothing vaguely sinister about our calculatedly innocuous name.***

PLAYBOOK MINDMELD: Even the seemingly harmless daily list of birthdays is an impressive extension of the Playbook brand identity. The list both enhances the sense of clubby insularity that allows each Playbook insider to feel like a true "insider," and is yet another means of currying favor with certain people. Allen can both suck up to sources by recognizing their birthdays and allow his contacts to curry favor with one another through the use of the "hat tipped" birthday announcement.

SPORTS BLINK -- FAMED POLITICAL TIPSHEET PLAYBOOK INCLUDES STRANGE NUGGETS OF STALE SPORTS NEWS, LIKE THE SCORE OF ONE COLLEGE FOOTBALL GAME PLAYED YESTERDAY, NEAR END OF MOST DAY'S EDITIONS. This is perhaps an effort on the part of the author, MIKE ALLEN, to present himself as a normal human with normal human interests, engaged in casual interaction and communication with other well-socialized adult professionals.

--NFL TEAMS THAT HAVE CLINCHED THEIR DIVISIONS: The Indianapolis Colts of the AFC South.

QUOTE OF THE DAY "That’s what happens when you have Grampa Newt! You get to go to a Trident submarine!" -- Mike Allen http://goo.gl/URh8Ti