Sherlock returns! "Mad Men" departs! It's going to be a fan's dream year 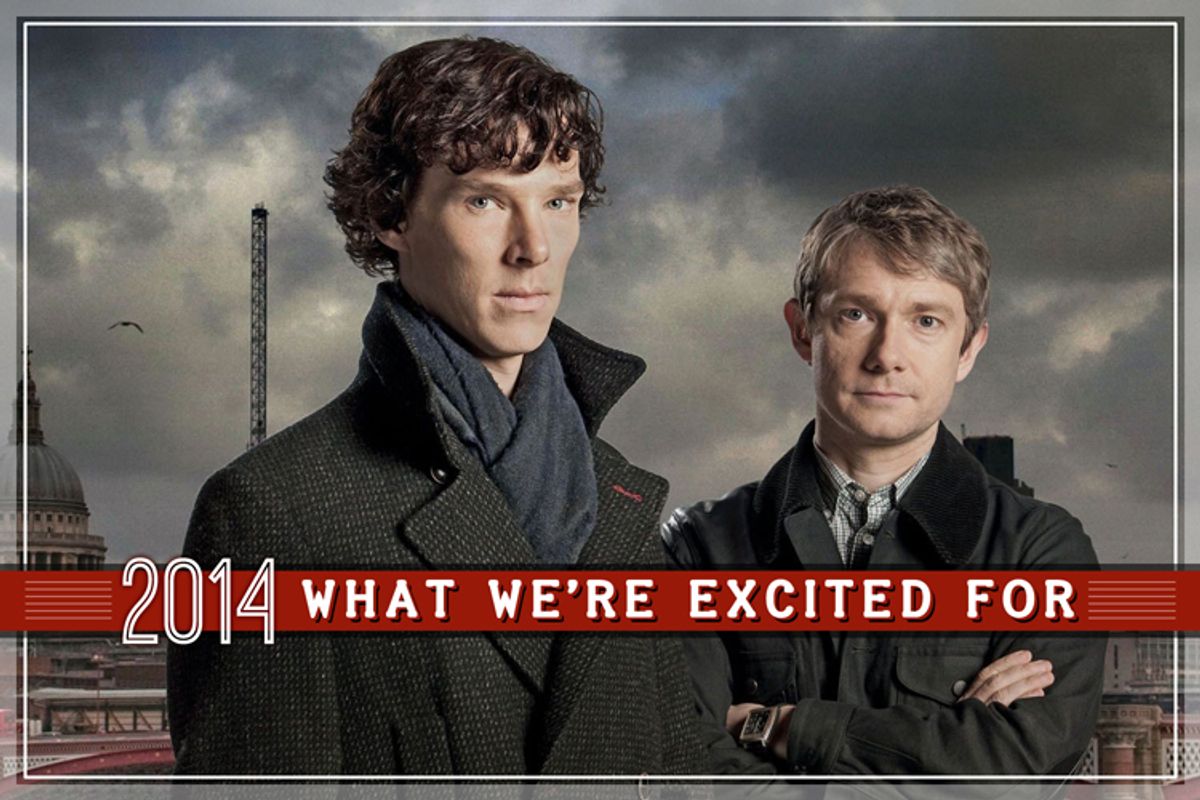 I have a good feeling about you, 2014. If there's a theme to be found in the promises you offer, it's that patience pays off. We've been good. We've been devoted. And though we hate to be premature, you'll forgive us if we're a little eager here. So unless you screw us over royally with some drastic gimmicky moves, we're just going to go ahead and put these on our "Best of" list already. And thank you, thank you in advance.

You know the part in the trailer, when Mycroft says, "It's been two years. He's got on with his life," and Sherlock scoffs, "What life? I've been away"? That was for us. Two long years after seemingly leaping to his death, everyone's favorite "high-functioning sociopath" returns this winter, and we can get on with life again at last. How did he do it? What's the deal with Watson's mustache? We cannot wait to find out.

And you thought the wait for "Sherlock" was long. It's been seven years since we reluctantly bid adieu to the denizens of Neptune, Calif., cursing the cruel gods of the UPN. Thanks to the devotion of fans and a Kickstarter that went through the roof, Veronica and her friends return this March to solve a mystery hinging on – who else? – irresistible bad boy Logan.

Did we say the wait for "Veronica Mars" was long? Scratch that. Over three decades after Carl Sagan made astronomy trendy and claimed the word "billions" as his alone, space hottie Neil deGrasse Tyson will take us again to the stars for FOX. Tyson says why we need Cosmos again: "It’s the science of the day that gives us knowledge about how to think about our place in the universe." And it just happens to look absolutely gorgeous.

"The Magician's Land" by Lev Grossman

The final? maybe? chapter in Grossman's addictive "Magicians" series arrives on August 4 -- not that we're counting the days or anything. Early hints say his hero Quentin Coldwater will return to Brakebills and set off "a chain of events that will bring Earth and Fillory crashing together." We say we've got our best beach read all lined up.

The impending and justified superstardom of Shailene Woodley

As the star of the hotly anticipated "Divergent," she's poised to be the year's leading action heroine, non-Katniss Everdeen division. But as Hazel Grace Lancaster, a teenager who falls in love with a boy from her cancer support group in the adaptation of "The Fault in Our Stars," the 22-year-old's world domination is all but assured.

We're still drying our tears over the upcoming departure of Matt Smith, but the prospect of Peter Capaldi – most recently better known as "The Thick of It's" foulmouthed Malcolm Tucker – taking the reins of the TARDIS has us eagerly anticipating the Doctor's new and more mature incarnation. And that single shot of him glowering from "Day of the Doctor" promises we're in for a whole new Time Lord.

The return of Adele

It's still just speculation, but rumor has it that the diva, who's been keeping a low profile since the birth of her son in 2012, has been  putting together a new album. Her collaborator Ryan Tedder says she "sounds even better than before" and that "She's still my favorite artist in the world." Not a bad hint coming from the man who just came off working with a little up-and-coming artist named Beyoncé.

Kenneth Branagh's doing "Macbeth." Idina Menzel is doing a new musical. But for us, theater season means one thing – the revival of John Cameron Mitchell and Stephen Trask's obsessively beloved rock and roll musical "Hedwig and the Angry Inch." Though Broadway will take away much of the original production's intimacy, we still wouldn't miss Harris in high heels and an East German accent for the world.

Ted Mosby is finally going to end up with his soul mate. There will be blood and sex and revenge galore in Westeros. We don't how Don Draper will end his saga, but we are very confident he'll be wearing early seventies era pants when it happens.

Hooray for sporting events that come around every few years and get the entire goddamn planet excited. If you're looking for us, we'll be at the bar, with our friends, screaming at the television.

Joseph Fink and Jeffrey Cranor's otherworldly, adored podcast of "news, announcements and advertisements" from a small Southwestern town is being adapted as a novel for Harper Perennial, publishing in the fall of 2015. Will the written word live up to its quirky auditory predecessor? Who cares? We'd pre-order now if we could.