Phil Robertson and Mike Huckabee double down on homophobia 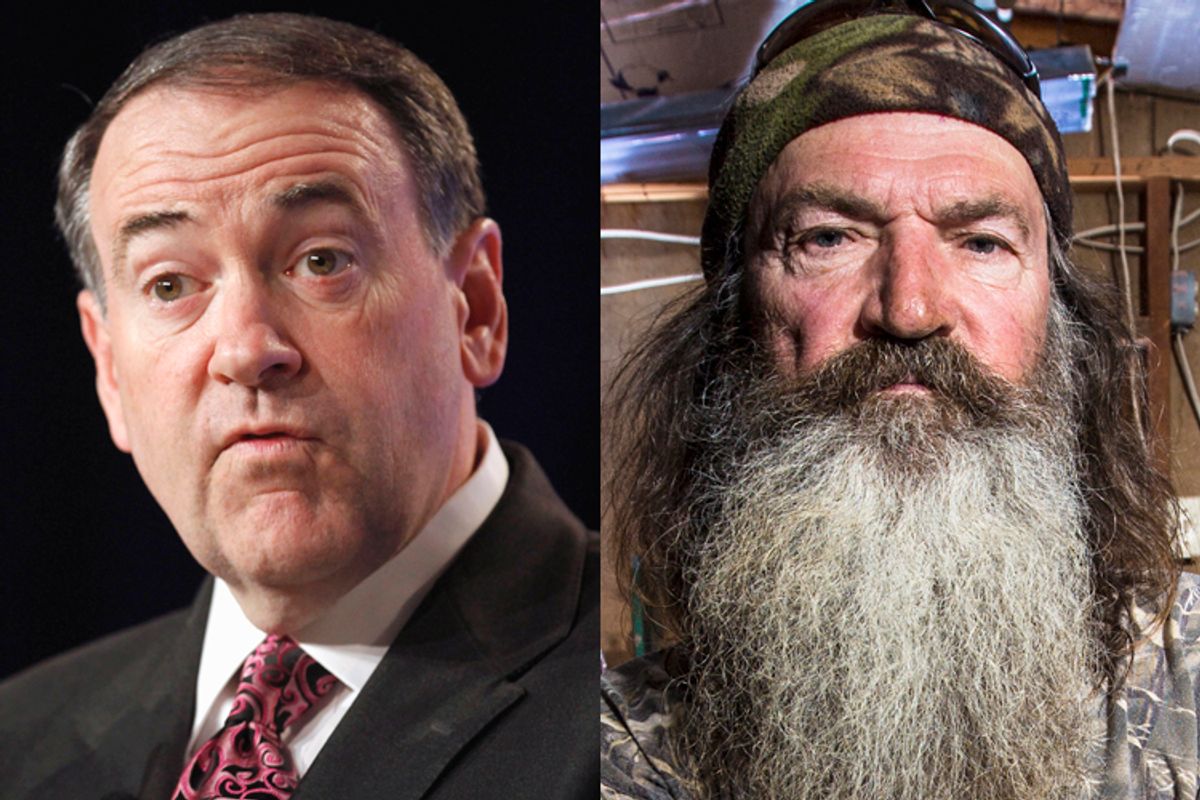 Proving yet again that there is no act of ignorance which cannot be doubled down upon, both possible 2016 Republican presidential candidate Mike Huckabee and recently suspended "Duck Dynasty" star Phil Robertson spent the weekend staunchly defending homophobia. Oh sorry, I meant "tradition."

Robertson made headlines last week thanks to a recent interview with GQ in which he puzzled over male homosexuality, breaking it down with the observation that "It seems like, to me, a vagina — as a man — would be more desirable than a man’s anus. That’s just me. I’m just thinking: There’s more there! She’s got more to offer. I mean, come on, dudes! You know what I’m saying? But hey, sin: It’s not logical, my man. It’s just not logical." He went to add, "Start with homosexual behavior and just morph out from there. Bestiality, sleeping around with this woman and that woman and that woman and those men." His comments equating homosexuality with having sex with animals, and assuming that sexual orientation is a simple matter of a preference for one orifice over another, sparked justified horror and condemnation. But they also drew support from the likes of professional attention seeker Sarah Palin, who leapt on the controversy to declare, "This is what Americans desire and deserve; we're not rooting for your social truces."

Adding to Robertson's list of defenders, on "Fox News Sunday," Mike Huckabee admitted that while the comments may have "more appropriate for the duck woods than it would be for the pages of a major news magazine," they were still correct. The former governor, who has also created a "Stand With Phil and Support Free Speech" Facebook page, told Chris Wallace, "I think it's come to a point in our culture where political correctness has made it so if you want to take a point of view that is traditional, that holds to a steadfast, old-fashioned biblical, Christian values — which are also, by the way, values of traditional Judaism and even Islam — and somehow you're just supposed to shut up and keep that to yourself." He added, "There’s a new level of bullying on the part of these militant activist groups if anyone says something that holds to the same position that Barack Obama held in 2008 when he ... made it very clear that he opposed same-sex marriage and he said he did so because he was a Christian and because of his biblical views."

And over the weekend, Robertson himself spoke out, telling a bible study group at his home that "I love all men and women. I am a lover of humanity, not a hater … . I will not give or back off from my path because you conquered death, Father, so we are not worried about all the repercussions … . We murder each other and we steal from one another, sex and immorality goes ballistic. All the diseases that just so happen to follow sexual mischief … boy there are some microbes running around now. Sexual sins are numerous and many, I have a few myself. So what is your safest course of action? If you’re a man, find yourself a woman, marry them and keep your sex right there … . Jesus will take sins away, if you’re a homosexual he’ll take it away." Robertson says, "We are a bunch of rednecks from Louisiana, but I am not uneducated, I have a degree from Louisiana Tech." If only a university education were any measure of basic humanity.

The problem with homophobes — and make no mistake, if you think that gay people are just being gay to annoy God, you're a homophobe — is their stubborn refusal to grasp that sexual orientation isn't something to be talked out of. Nobody's going to say, "Oh, okay, now that you've explained it to me, I totally want the opposite sex now!" Gay people don't need fixing. To suggest so is hateful. It says that being gay is just a bad choice. And it has wreaked so much pain in the lives and gay men and women, for far too long.

Robertson says, "I have been immoral, drunk, high. I ran with the wicked people for 28 years and I have run with the Jesus people since and the contrast is astounding." This is how these "lovers of humanity" really think. They equate homosexuality with the things in their own pasts they're ashamed of. They believe that orientation is "immorality." They believe that wanting to be treated fairly and equally is an affront. They think that their right to "free speech" trumps anybody else's right to be treated with dignity and respect. And that's not anything even close to Christian love.