Why I spoke out about my sexual assault: Sen. Gretchen Whitmer talks to Salon

"If I was asking my colleague to tell a tough story, I needed to be brave enough to tell my own," senator explains 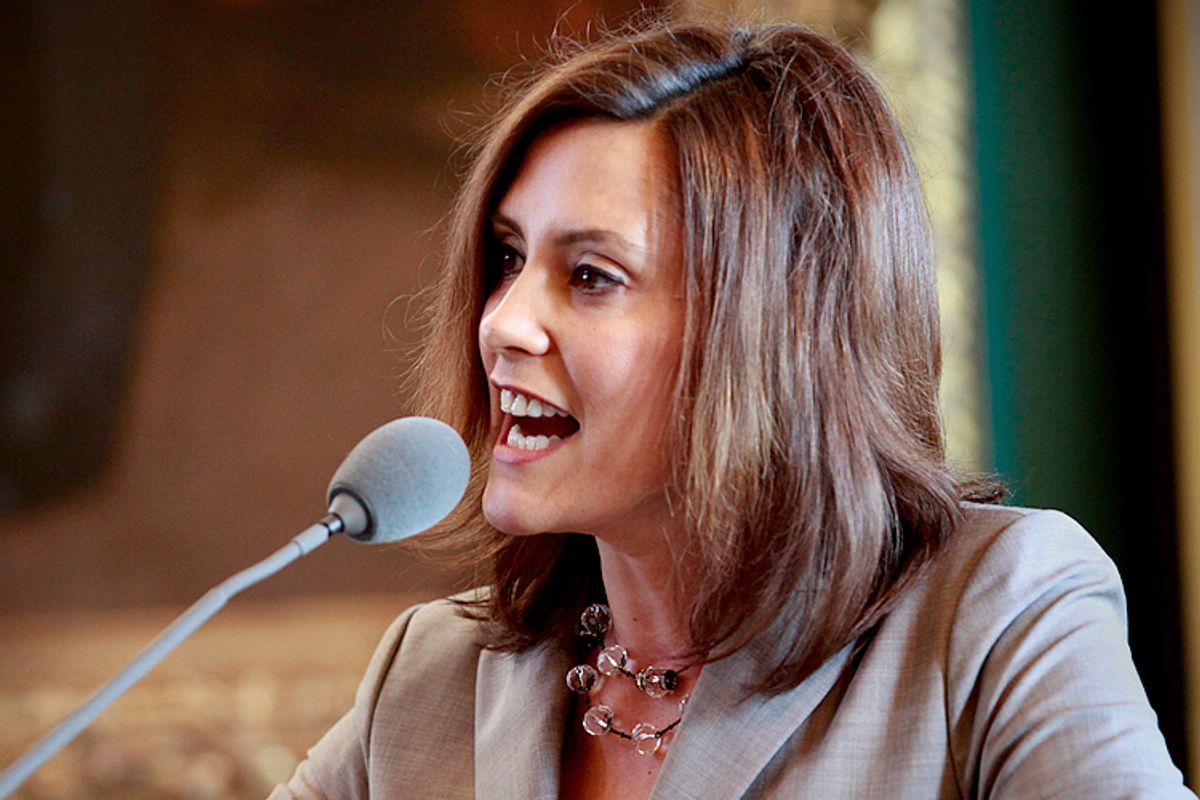 Capping off a year of far-right state abortion bills, this month the Michigan Legislature banned private insurance plans from covering abortion, leaving women to seek separate riders for abortion coverage – what critics derided as “rape insurance.” While an identical bill was vetoed last year by Michigan’s Republican governor (he said it “went too far”), this one was offered through an “initiative petition” and thus didn’t need Snyder’s signature.

In a pre-vote Senate speech blasting the bill, state Sen. Gretchen Whitmer shared her own story for the first time: “Over 20 years ago I was a victim of rape. And thank God it didn’t result in a pregnancy. Because I can’t imagine going through what I went through and then having to consider what to do about an unwanted pregnancy from an attacker.”

“Even the next morning, I was conflicted as to whether or not it was the right thing to do,” Whitmer, the Michigan Senate Democratic leader, told Salon. In a Friday interview, Whitmer discussed her choice to go public, her efforts to overturn the law, and her “ignorant and sexist” colleagues. A condensed version of our conversation follows.

In your testimony, you called this bill “one of the most misogynistic proposals I have ever seen in the Michigan Legislature.” How so?

We’re sitting there in a chamber where only four out of 38 senators are women. This is the latest in what has been a barrage of anti-woman legislation. And when my colleagues don’t even have a single hearing on it, or listen to the women that are going to be impacted by this, I think it’s fueled by ignorance and lack of respect for women … The worst example I’ve seen, and I’ve seen some ugly stuff over the last 15 years.

Do you believe that the legislators who voted for this are sexist?

I believe that they are ignorant and sexist, yeah. We don’t see any anti-, you know, any special disparate treatment of men ever. But it’s routine to see it for women. This is a legislature in which one of my male colleagues referred to a woman that he disagreed with as a hooker. This is a legislature that took women’s right to speak on the floor of the House because they didn’t like it when they said the word “vagina.”

Michigan Right to Life referred to the passage of this bill as a vote “to ensure no person is forced to fund the deliberate taking of an innocent human life in the name of health care.” What do you make of that claim?

Well, it’s on par with their extreme rhetoric … They will say anything to push, to advance their anti-choice agenda, and it sometimes -- it often has no resemblance to the truth. They collected signatures telling people that this was to prevent taxpayer-funded abortions. The truth is no tax dollars are used toward abortion in Michigan, by state law. They told people that the petition put the measure on the ballot so everyone could have a vote -- when in fact it was completely geared toward avoiding a gubernatorial signature and a vote. So this is a group that I have very little regard for. Because I know for a fact they don’t stick to facts. They stick to hyperbole, and will say whatever it takes to advance their agenda.

What do you believe the impact of this law is going to be for women in Michigan?

Well, it essentially will preclude any woman from ever having insurance to pay for an abortion -- whether … as a result of a rape or incest, or even a planned pregnancy that goes wrong and requires a medically necessary D&C for the health of the woman. Insurance will no longer cover those. And yes, they say you can go out and buy a rider, but the fact of the matter is in states that have passed this kind of legislation, those riders just aren’t available.

So will this law be overturned?

I’m hopeful. I can tell you that it’s been overwhelming, the reaction -- even people who identify themselves as pro-life say this is far too extreme. Republicans, Democrats, men, women -- we’ve heard from people of every political, gender, you know -- every persuasion. And so I do believe eventually it will get repealed ...

I want to ask you about the end of your testimony. You mentioned that the rape, 20 years ago, is “something that I’ve hidden for a long time.” What spurred you to choose this moment to speak out about it?

Well, you know, I hadn’t planned on talking about it. And it’s always been in the back of my head. When I looked across the aisle and I thought about my colleague, who -- he and his wife went through a second D&C for a failed and desperately wanted pregnancy. I was trying to encourage him to tell his story, because it was very clear the Republicans didn’t hear from any person whom this was going to impact.

They didn’t hear from any healthcare provider who’s on the front line. They didn’t hear from anyone in the faith community. They took no testimony. Not one Republican stood up and said that this was a good thing, or defended their vote. And it became very clear to me that they – they needed to put a face on who the women were that are going to be impacted by this.

And if I was asking my colleague to tell a tough story, I needed to be brave enough to tell my own. And so I did.

And even the next morning, I was conflicted as to whether or not it was the right thing to do. Because it didn’t change a single vote on the Senate floor. But by the time I got to work on Thursday morning, and saw thousands of people had seen the YouTube video, and we’d gotten calls and emails and Facebook messages, I knew I’d done the right thing.

And -- and we need to give voice. That’s our job, but it’s also the right thing to do.

Do you believe that your sharing that story will spur other people to speak up about surviving rape?

I know I have. I’ve been told by women from all over, men who love women who’ve gone [through] something, a rape or a loss, planned pregnancy -- people are sharing their stories. And I do think that’s empowering and inspiring.

And what’s it been like for you since then to have this out there?

Just hearing from people has really bolstered my spirit …

As soon as I gave that speech, I picked up the phone and called my dad. Because even though he’s one of my best friends in the world, I had not shared that story with him, and it’s -- that was difficult, but I do feel better about it. And I think that’s the most encouraging thing, is hearing from total strangers who feel empowered to share their story, and inspired to move forward, and to do something about this law – to help other women.

Do you wish now that you had shared this story earlier?

I don’t know. You know, we’ve had issues of choice arise. We’ve had issues that impact women. But I felt like people had always had the chance to share, put a face on what it meant. And on this point, it was so over the top that I just -- it felt like the right thing to do.

What should your colleagues have taken from hearing you share your story?

These votes don’t happen in a vacuum. You know, these votes especially are going to have a real impact on so many women they never took the time to hear from.

I even had some of my Republican colleagues come over the next day and tell me that they wished they’d had the courage that I had, to cast the vote that I did. And that’s an awful thing to hear. You know, I mean I feel bad that they regret not having that kind of courage. But you know, if they voted the way they think is the wrong way because one wealthy special interest group wanted them to, it sickens me.

Colleagues who defended the bill on the merits – have they spoken to you about this since then?

Well, here’s the thing: Not one person defended the bill on the merits. Not one Republican had the temerity to stand up and defend the vote, or to talk about why it was a good thing for the state. Not one. They were silent. And I think it’s because either they were completely ignorant, or they were ashamed. These are people that don’t shy away from the microphone, and don’t avoid credit -- and yet they were mute when this came up for a vote, and have been ever since.

And in private, do they make the case to you for the bill?

For people who believe in the right to choose, do you think there’s a downside to the way that rape gets talked about in this discussion? Do you think that the focus that’s put on highlighting the question of abortion in a case of rape or a case of incest undermines the argument for a right to choose for everyone else?

That’s an interesting question … The makeup of the Legislature right now in Michigan is overwhelmingly pro-life, and I think the discussion on D&C and rape is something that really highlights how extreme this bill is. In terms of having the general debate on choice, there’s no – you know, considering the makeup right now of Michigan, we’re not going to be successful, just on that debate. We’re just so overwhelmingly pro-life-controlled right now in Michigan. So the focus on how extreme this measure is, I think was where we had the most ability to persuade. But even – you can see how extreme our Legislature is, that we weren’t even able to persuade one Republican to vote the way the vast majority of people in Michigan see it.