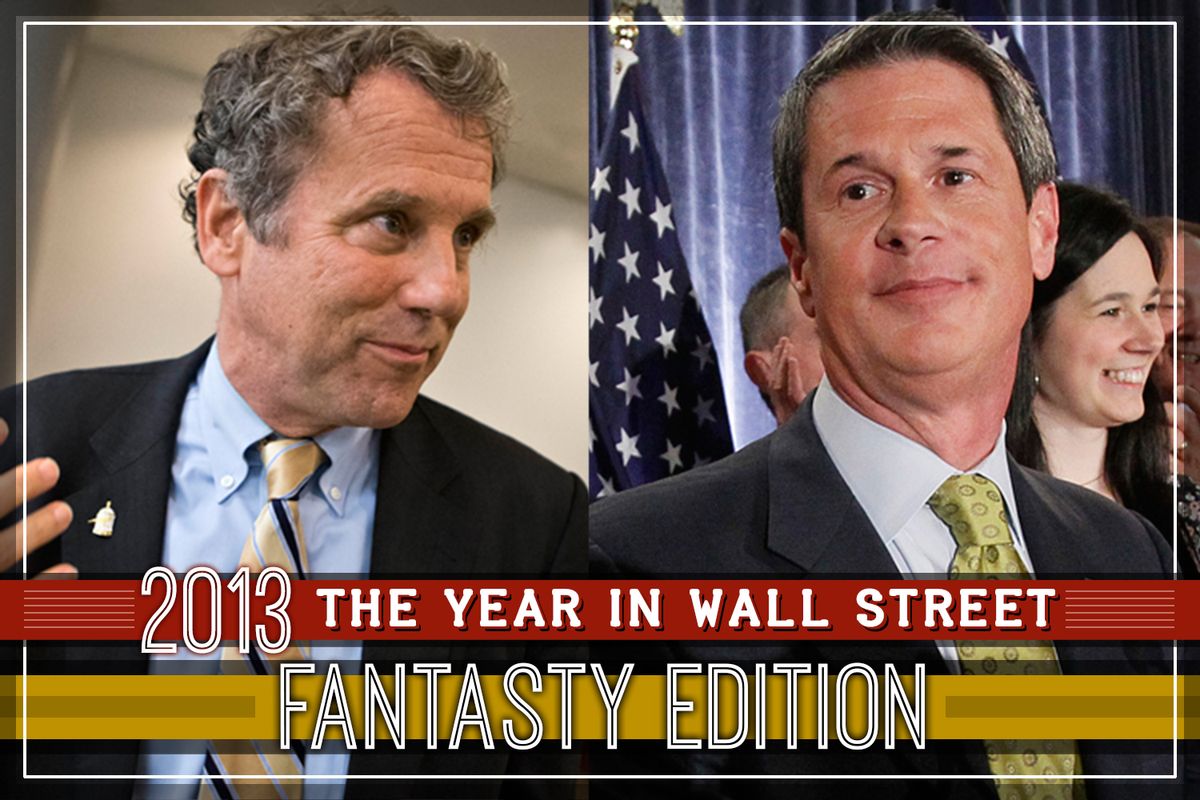 Most late-December, playing-out-the-string punditry either revisits the year passed (while neatly avoiding the predictions they botched) or forecasts the year ahead (with guesswork never to be discussed again). So there’s some room for innovation. That said, here are my year-end economics and finance awards for 2013, the way it should have gone:

Best Bipartisanship: Buoyed by an ideological consensus that Too Big to Fail banks take advantage of taxpayer subsidies and heighten the potential for economic collapse and costly bailouts, Sens. Sherrod Brown and David Vitter formed an unlikely but brutally effective alliance. They introduced the Terminating Bailouts for Taxpayer Fairness Act, to increase capital requirements on banks with over $500 billion in assets, ensuring that they can pay for their own losses. Because this effort could not possibly be questioned by the Obama administration, and because naked influence peddling by corporate lobbyists was banned by the 2010 Restoring Power to the People Act, the bill sailed through the House and Senate, and the president simply had to sign it. The new law will force mega-banks to either carry sensible balance sheets that minimize risk, or shrink in size, with taxpayers benefiting either way. Finally, Democrats and Republicans showed they could work together to move the country forward. A follow-up bill to bring back postal banking as a public option for consumers should have a smooth ride in Congress in 2014, everybody expects.

Most Diligent Federal Agency: The Department of Justice finally turned over a new leaf in 2013. Instead of devoting resources to irrelevant lawsuits against the likes of the Real Housewives of New Jersey or Trump University, they prioritized enforcement. They eschewed headline-grabbing settlements that fall apart upon inspection, instead making a concerted effort to put those who directed and authorized shocking financial misconduct in jail. They used existing laws like Sarbanes-Oxley CEO certifications to indict corporate chieftains who lost control of their firms. They flipped mid-level managers to get at the executives responsible. They demanded accountability for abuse of homeowners and service members, and the rigging of markets, from foreign exchange to commodities. The critical efforts of the financial fraud task force finally bore fruit, and the leadership refused to just let Wall Street walk. The resulting fear from the financial sector of the power and reach of law enforcement created a positive feedback loop that returned stability and safety back to the system. Bravo to everyone.

Best Preemptive Action: After government officials noticed hedge funds and private equity firms buying up foreclosed properties on the cheap with borrowed cash, with designs on renting out the homes, they immediately grew concerned about absentee slumlords trying to corner the rental market in key regions. The alert went out to local communities, and because these upstanding city council members and rent control board officials could never be tainted by big money, they put in place aggressive tenant laws to protect renters from maintenance delays, ripoffs and abuses, as well as affordable housing goals to give first-time homebuyers a shot at building wealth instead of consistently losing out to Wall Street cash. These matters typically get adjudicated at the local level, but the early intervention from federal regulators, as usual looking out for the best interests of ordinary people, made a big difference.

Best Economic Maneuver: Federal spending, after years of cutbacks that could fairly be called a slow-motion government shutdown, broke out in 2013. It didn’t look like it would happen that way at the beginning of the year, with sequestration scheduled to hurt the economy by causing the loss of roughly 1 million jobs. But one chart, showing how premature austerity at a bigger level than the demobilization after World War II has wrecked the economic recovery, eventually brought Democrats and Republicans to their senses. They restored government spending levels to the relatively modest post-recovery standards of the Reagan administration, leading to a full percentage-point decline in the unemployment rate and similar improvements to GDP. The public sector, no longer made scapegoats and forced to sacrifice in the name of deficit reduction, performed admirably, and with growth there mirroring the private sector, the economy once again grew solidly from the middle out.

Most Successful Activism: So much to choose from here, from the movement to force the banks to recognize their epic cock-up of mortgage documents, to the movement by activist shareholders to strip Jamie Dimon of his chairman and CEO titles at JPMorgan Chase. But the winner has to be the movement for $15 an hour jobs for fast-food and big-box retail workers. This spread quickly in 2013, reaching dozens of cities and putting multinational corporations like Wal-Mart and McDonald’s back on their heels. Because bottom-up organizing always melts away deep-pocketed opposition immediately and totally without resistance, the workers got their wish, and were rewarded with a living wage. Great work. This is a first step to undoing the long decline of household income and the separation between productivity and wages. Now it’s on to expanding Social Security, which will probably get done by 2015 at the latest.

Most Important Action by a Freshman Senator: You can give this to Elizabeth Warren for an array of different successes in 2013. But her work on allowing students to borrow for higher education at the same rate banks get from the Federal Reserve was a masterstroke, highlighting the hardships associated with student debt that came rushing to the forefront this year. For the first time, student debt holders were less likely to purchase a home or automobile than their non-indebted counterparts, showing that the rising debt burden – now over $1.2 trillion – had begun to hold back the economy, as stressed graduates delayed major purchases. Warren’s bill, which of course passed immediately without argument, began to undo some of the damage. By picking up the innovative program in Oregon to tie college costs to future income, Congress is poised to go further, with eyes on allowing the discharge of student debt in bankruptcy and an end to aggressive collection tactics by contractors hired by the Department of Education. Once again, Congress is responding to real-world challenges like model public servants.

Best Turnaround: 2013 was the year when Washington finally apologized for the pain and suffering imposed on homeowners. They reformed mortgage servicing so that never again could someone lose their home despite making every payment. They made guilty parties pay for their misconduct, and delivered eagle-eye oversight to make sure prior agreements were adhered to. When officials discovered Bank of America giving Target gift cards to employees who pushed homeowners into foreclosure, they leapt into action, and the resulting lawsuit produced serious pain for the bank. When they noticed that homeowners who suffered major damage in natural disasters had their insurance checks confiscated by their mortgage company, they immediately threw everyone in jail and got the money into the hands of those who needed it. They answered every question critics had about their commitment to homeowners, and they set in motion new, borrower-friendly rules that made sure nobody would get left behind in the wreckage of the housing crisis. It’s rare to see such a coordinated effort to reestablish the rule of law in such an important economic sector.

Best Performance by an Actor in a Recitation of Satirical Tweets: Not even a contest.

Here’s hoping that 2014 is just as spectacular, and that the most obvious ways to move the country forward are once again preeminent. Happy New Year!