Abortion is now legal in Ireland if a woman's life is at risk, and supposedly "pro-life" groups are incensed 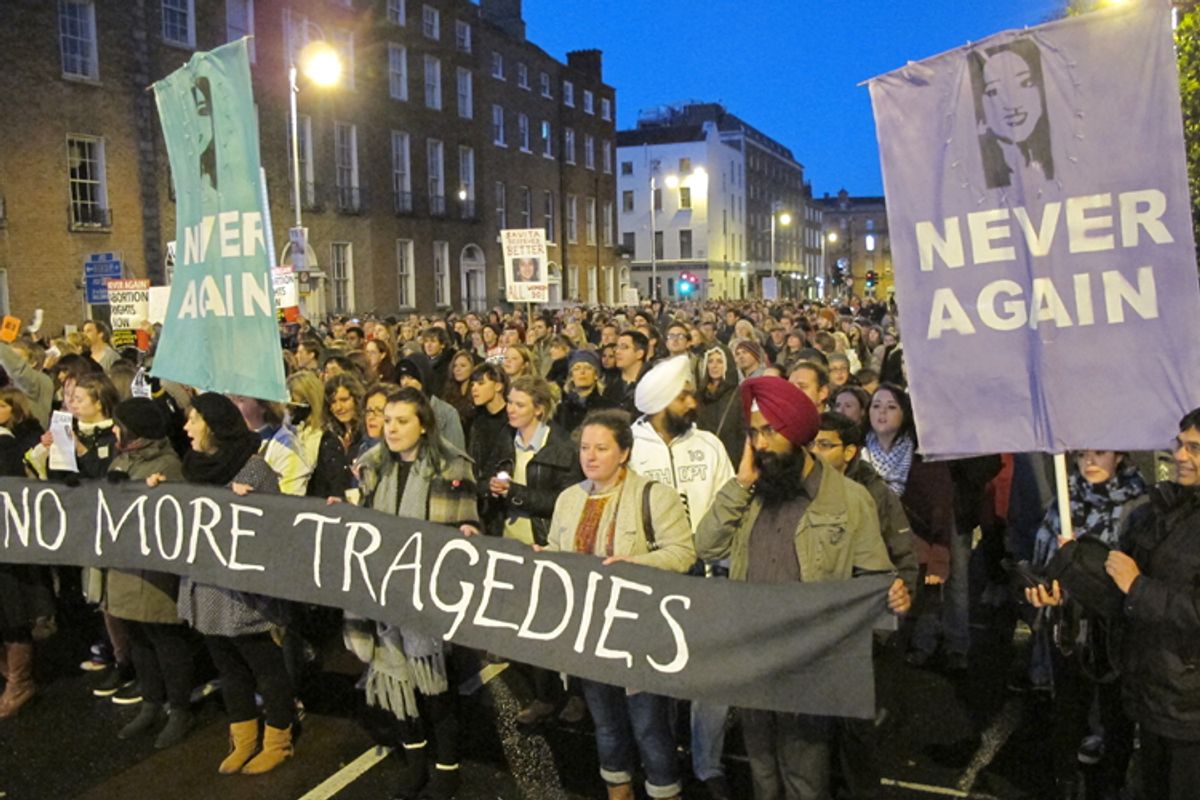 What do you call it when the law finally recognizes that women should have the right to lifesaving medical intervention? In Ireland, you call it "controversial." In a groundbreaking move earlier this week, Ireland legalized some forms of abortion when a woman's life is in danger.

The new Protection of Life During Pregnancy Act stems largely from the harrowing 2012 tale of Savita Halappanavar, a Galway dentist who died "in agony" of septicemia when hospital doctors refused to intervene over the course of a few days while she was miscarrying. Her husband asserts the staff informed her "This is a Catholic country" and that "As long as there is a fetal heartbeat we can’t do anything." The new law, which would allow doctors to perform abortions if they believe "there is a real and substantial risk to a woman’s life" because of a medical issue or suicide risk was passed in July, but only went into effect Jan. 1. In order to perform the procedure, two doctors have to examine the woman and agree that "the risk to her life could be averted only by carrying out the procedure" -- and in the case of a suicide risk, a psychiatric evaluation is also required.

It's about as restrictive a limitation as one can get while still allowing for the possibility of lifesaving intervention, yet the RT network called it "controversial" Wednesday, and the Irish Independent similarly dubbed the move "hugely controversial." Yet RT notes, "Abortion will still not be allowed when a woman has been raped or when the fetus has serious deformities" and that the Irish government insists "the new law does not weaken the general prohibition on abortion in the country." Nor does it set up any clinical guidelines whatsoever for doctors to consult while assessing risk to life. And with no clear-cut articulation of what constitutes a potentially fatal situation, doctors could feel a chilling effect when it comes to decision-making, knowing they'd be breaking the law if they terminate a pregnancy and there's any dispute whatsoever over whether the woman faced imminent, certain death.

But despite the nation's still draconian policy regarding the value of women's lives, Caroline Simons from the country's Pro Life Campaign calls the updated law "life-ending, not life-saving," taking particular issue with the allowance for abortion in the case of suicide risk. She cites "all the peer reviewed evidence showing that abortion has adverse mental health consequences for women" -- despite the wealth of easily accessible information that suggests  "no significant differences in long-term mental health between women … who choose to terminate a pregnancy and those who do not." And of course the concerned folks at Life News have declared, "It’s Now Legal to Kill Unborn Children." They claim that "Women in Ireland have always been given whatever treatment they need during pregnancy" – an assertion that Savita Halappanavar's surviving family members categorically dispute. In an October report, the Irish Health Information and Quality Authority identified a full "13 opportunities when her life might have been saved but were missed." At the time Minister for Health Dr. James Reilly said, "I deeply regret that our health services failed [Halappanavar's widower Praveen] in such a terrible way."

The wildly misnamed "pro life" lobby consistently peddles the fiction that every embryo, no matter how viable it may truly be, is worth saving. And it brazenly ignores the question of whether women's lives have at least equal value to those of the fetuses they're carrying. It's not just in Ireland – here in the U.S. in just the past few weeks, the American Civil Liberties Union has challenged the United States Conference of Catholic Bishops – an organization deeply involved in the policymaking of an increasing number of American hospitals – about its binding directives that resulted in the needless suffering of a Michigan woman who says she was refused medical help during her own miscarriage. "They told me there was nothing they could do," she says.

In the great documentary "After Tiller," Dr. Susan Robinson explains succinctly what the foes of not just reproductive freedom but basic health services for women refuse to acknowledge – that "Nobody f---ing wants an abortion." To claim a moral high ground while condoning the practice of letting women – and often, their babies right along with them – die is the worst kind of hypocrisy. Saying no to needless suffering, making the smallest of strides toward acknowledging the personhood of women, taking their well-being into account and viewing them as more than incubators, shouldn't be called "controversial." Not in Ireland, not anywhere that dares to call itself civilized. It should be called standard medical procedure.