Even if your state starts letting you smoke pot, your boss might not. Here's what happened to Brandon Coats 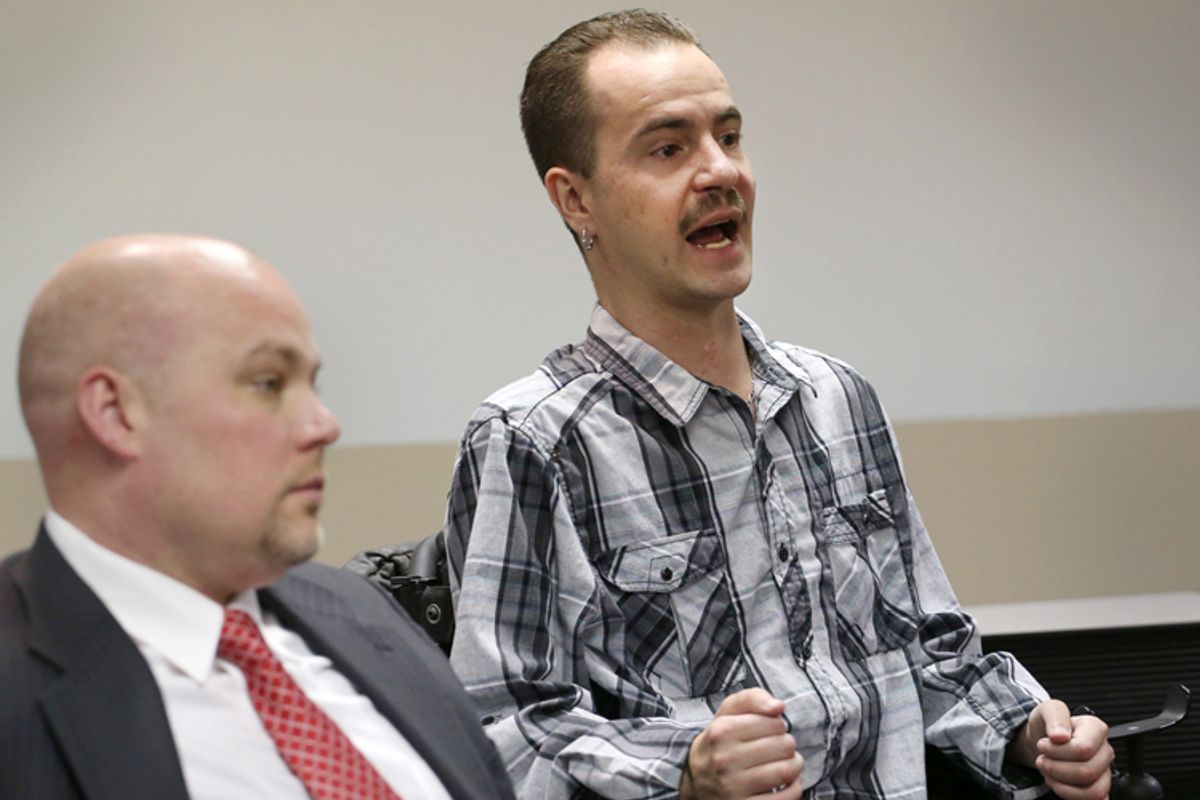 On New Year’s Day, Colorado became the first state in which it’s legal to recreationally smoke pot. But that doesn’t mean it’s not a fireable offense. Under U.S. law, private companies can fire employees for almost anything they do at home or at work. And while Colorado has bucked the trend by banning firings for “lawful” outside-work activities, that protection doesn’t extend to pot.

“I’m not going to get better any time soon,” paraplegic plaintiff Brandon Coats told reporters after his 2010 firing by Dish Network was upheld in a precedent-setting Colorado Court of Appeals case last April. “I need the marijuana, and I don’t want to go the rest of my life without holding a job.” As the Denver Post reported, Coats alleged he was illegally fired by the cable company Dish Network for using medical marijuana to mitigate muscle spasms. (Coats was fired three years before Colorado voters legalized recreational marijuana use; his case rested on the state’s Medical Marijuana Amendment, which went into effect in 2009.) Dish did not respond to Salon’s Thursday morning inquiry.

"If Mr. Coats can't win this case, then nobody can," Coats' attorney Michael Evans told Salon. "He's about as bad as you can get in terms of physical disability ... He was a great employee, and they admit that he was never impaired [at work] ... He was following all of the laws."

Evans’ firing and Appeals Court setback have sobering implications for customers of Colorado’s newly legal recreational marijuana industry. In November 2012, Colorado and Washington state became the first U.S. states to legalize non-medical marijuana use (Washington’s law goes into effect later this year). Last August, the U.S. Justice Department announced that – as long as those states implemented “strong and effective regulatory and enforcement systems” regarding their newly legal marijuana industries – it was deferring its right to challenge the new legalization laws, and would continue not to devote federal resources to “prosecuting individuals whose conduct is limited to possession of small amounts of marijuana for personal use on private property.” Legalization advocates hailed those votes, and the feds’ choice not to crack down in response, as a potential tipping point for their cause; Drug Policy Alliance executive director Ethan Nadelmann predicted to Salon last month that “Oregon and possibly other U.S. states will vote to legalize marijuana” in 2014.

But even if the feds leave some nonviolent pot-smokers in peace, their bosses may not. Because all marijuana use remains illegal under federal law, the Colorado Appeals Court concluded last April, it remains outside the scope of that state’s law prohibiting firings for “lawful activity” outside work. “The plain and ordinary meaning of ‘lawful’ is that which is ‘permitted by law,’ then-Chief Judge Janice Davidson wrote in her decision, citing Black’s Law Dictionary. Therefore, she argued, “an activity that violates federal law but complies with state law cannot be ‘lawful’ under the ordinary meaning of that term.”

In a dissenting opinion, Judge John Webb argued the statute’s “ambiguous” term “lawful activity” should be read in the context of the Legislature’s intent “to protect employees’ autonomy in their off-the-job activities, such as smoking and eating patterns that lead to obesity,” something the U.S. Congress had not attempted to do. “Recognition that protecting employees from discharge based on their off-duty conduct is primarily a matter of state concern,” wrote Webb, “favors measuring ‘lawful’ based on state law.”

Routed at the Appeals Court, Coats is appealing to the state Supreme Court. Evans said that court's months-long delay in announcing whether it would take Coats' appeal "indicates that it's a little more complicated than what Dish is making it out to be." He predicted that the Colorado Supreme Court would ultimately grant the petition and side with Coats (though without necessarily addressing recreational marijuana use directly), and that Dish would then take the case to the U.S. Supreme Court. If the court doesn't recognize that "you can't give a constitutional right and then have it taken away by employers," Evans argued, the state Legislature would have to step in to address what he called "a Catch-22 and a double standard."

But unlike Colorado (and New York, California and North Dakota), most states don’t ban companies from firing people for legal things they do outside of work in the first place. According to a 2010 review by the National Conference of State Legislatures, eight states protect workers’ right to use “lawful products” outside work without losing their job over it; 17 other states (and D.C.) ban companies from firing workers for smoking tobacco at home. But such laws (like federal protections for religious activity or union activism) are the exception, not the rule. So while some states that legalize pot could face Colorado-like questions about whether their definition of “lawful” includes the drug, in most states a boss’ right to sack pot-smokers would remain intact unless legislators specifically curtailed it. (In a 2012 ruling, the 9th Circuit Court of Appeals concluded that because the federal Americans With Disabilities Act defines "illegal drug use" based on federal law, it does not protect medical marijuana use.)

“We’d like to see state laws offer some protection for employees who consume marijuana outside work, and whose use has no detrimental impact on their job performance,” Nadelmann told Salon. (As the Arizona Republic noted, a 2010 law protects Arizona medical marijuana users from workplace discrimination, though a 2011 law strengthens employers' hands in punishing workers allegedly impaired on the job.) Nadelmann urged businesses and the Chamber of Commerce to focus on “employee performance in the workplace” rather than punishing “responsible employees” who use drugs outside work.

With marijuana use is no longer a crime under Colorado law, “People are surprised to learn that they can lose their jobs,” labor attorney Danielle Urban told the Denver Post. Like unpopular speech or political activism outside work, drug use that’s permitted by the government is still subject to regulation by your boss. Just ask Phil Robertson, or Chris Kluwe, or the non-famous Americans who say they were fired for having a John Kerry bumper sticker, or questioning their company’s government contract, or spending time with AIDS patients.

For centuries, Brooklyn College political scientist Corey Robin told Salon last fall, employers have tried to control employees’ behavior outside work, whether for the sake of a perceived “impact it might have on the inside ultimately,” or “because the employer had some particular political ax to grind, religious, cultural ax to grind, and was using the employment power to control that.” Robin, the author of "Fear: The History of a Political Idea," suggested that with the rise of social media, scrutiny that previously would have been trained on higher-profile culture industry workers is increasingly spread to other rank-and-file workers as well: “Employers just look at their employees as part of the brand, entirely.”

Evans noted that workplace drug tests like the one that cost Brandon Coats his job may reveal weeks-old, inactive marijuana metabolites, making them a poor tool for distinguishing between at-work drug use and weekend or vacation activity (in contrast, said Evans, "you could have a CEO shoot up on heroin on a Friday night" and test clean the next week). That distinction may not matter to some companies; while the the CEO of the video ad company Altitude Digital told the Post his company didn't plan to start drug-testing or regulating “off-hours marijuana use,” the paper reported that “several Denver-area businesses” declined to disclose their policies on pot.

“Employers hold all the cards," Mountain States Employers Council attorney Curtis Graves told the Post. And the state director of the National Federation of Independent Business told the paper after Coats' Appeals Court ruling that it intends to keep it that way: “We would not tolerate any attempt to infringe on the employers’ right to a zero-tolerance drug policy.”