A cover story on a murder victim draws well-deserved outrage 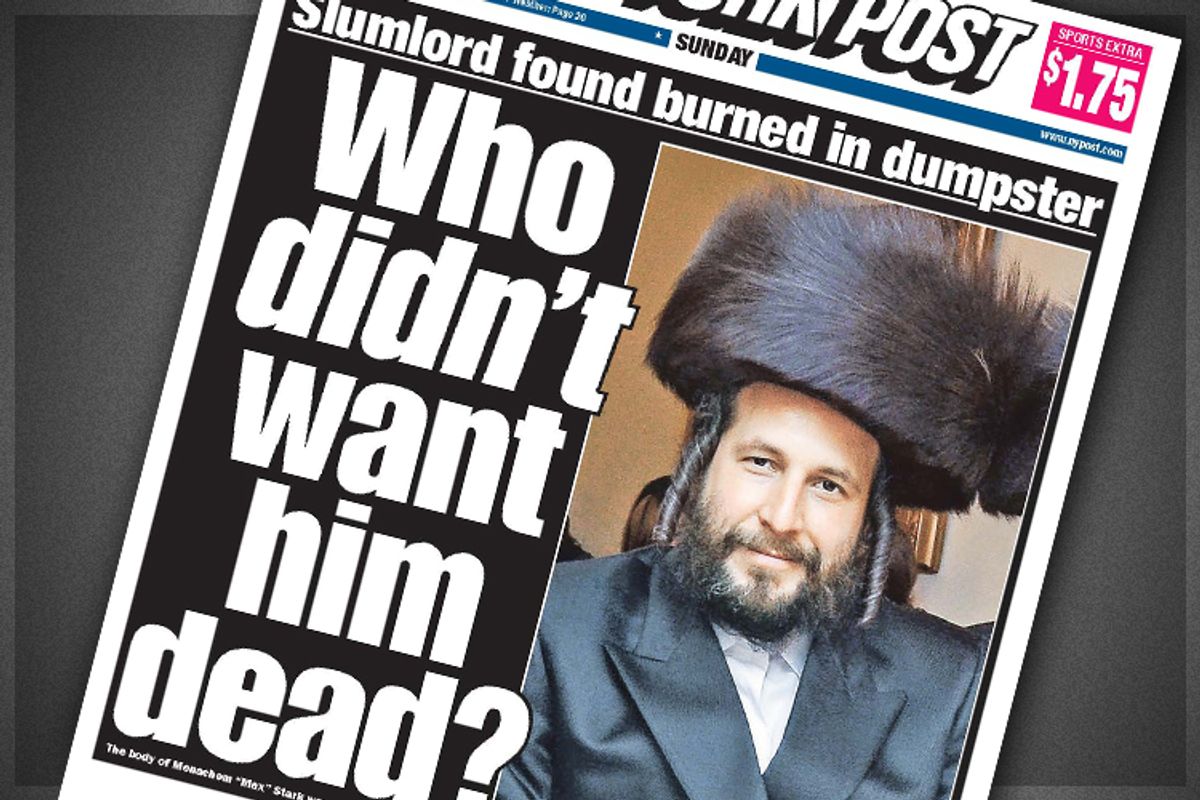 On Sunday, the New York Post achieved the seemingly impossible. It exceeded the bounds of tastelessness for a New York Post cover.

The Post is not known for its tasteful approach to the news of the day. Instead, its main claim to fame – beyond even its steadfast employment of professionally toxic person Andrea Peyser –  is its legendarily shocking, outrageous covers. This is the institution that gave us "Headless Body in Topless Bar," the paper that made every morning of the Anthony Weiner scandal a fresh opportunity for penis-related jokes.  (Who but the Post would have ordered the candidate to simply "BEAT IT"?) It's the Post, after all, the paper that called tan mom Patricia Krentcil the "toast of the town," Lance Armstrong a "drug pedaler" and Saddam Hussein "the butcher of Sagdad"  -- as if being overweight were the man's worst crime.

But on Sunday, it reported on the abduction and murder of 39-year-old real estate developer Menachem "Max" Stark -- whose charred remains were found in a trash bin over the weekend – by asking on its cover "Who didn't want him dead?" I don't know, New York Post. Maybe we could start with his wife and eight children and work from there?

Stark was a controversial figure. The New York Times describes him as being both "mourned and vilified" as a generous member of his Hasidic community and as an "elusive" property owner whose buildings – from SROs to "trendy lofts" – amassed serious safety violations.  The Post was more colorfully descriptive, calling him a "slumlord" and quoting an anonymous source who says, "He’s a Hasidic Jew from Williamsburg, and we think he’s a scammer."

The obligation of newspapers – even tabloids like the Post – is accuracy. No one would expect the Post to overlook Stark's long history of apparent disregard for his tenants, or to refrain from pondering whether his business practices factored in his murder. But it's another thing altogether to splash a photograph of a man who was abducted, suffocated and left with "bruises on his neck and back, and burn marks on his torso and hands" and cavalierly suggest that he had it coming.

At a press conference Sunday, local Brooklyn leaders including Brooklyn borough president Eric Adams called for a boycott of the paper. As Councilman David Greenfield told reporters, "New Yorkers, we’re a jaded bunch … We expect many bizarre things on the cover of our tabloids. But the one thing we do not expect is to literally kick someone while they’re down, and to condone the murder of an innocent victim."

It's disturbingly easy, when covering news, to forget that the stories involve people. The competition for the most eye-catching, attention-grabbing photograph or headline invariably leads to loathsome, controversy-sparking magazine covers and desperately teasing headlines. But a crime victim is not some cheating celebrity, to be picked apart and publicly shamed in the name of newsstand sales. Death is not fame. And murder isn't comeuppance.

In a follow-up story Sunday evening, Post writers Frank Rosario and David K. Li noted that the cover had drawn "harsh criticism" but quoted an unnamed "spokesman" for their own employer who says the "reporting simply pointed out that basic fact." The spokesman went on to add, "The Post does not say Mr. Stark deserved to die, but our reporting showed that he had many enemies, which may have led to the commission of this terrible crime."

It's not a "basic fact" to coyly wonder who wouldn't want to abduct, abuse and murder a fellow human being. It's insane. And in doing so, the Post has managed to yet again outdo itself, and add to the horror of an already horrible crime.