Sen. Jack Reed, D-R.I., whose bill gets a vote today, slams those like Rand Paul who call benefits "a disservice" 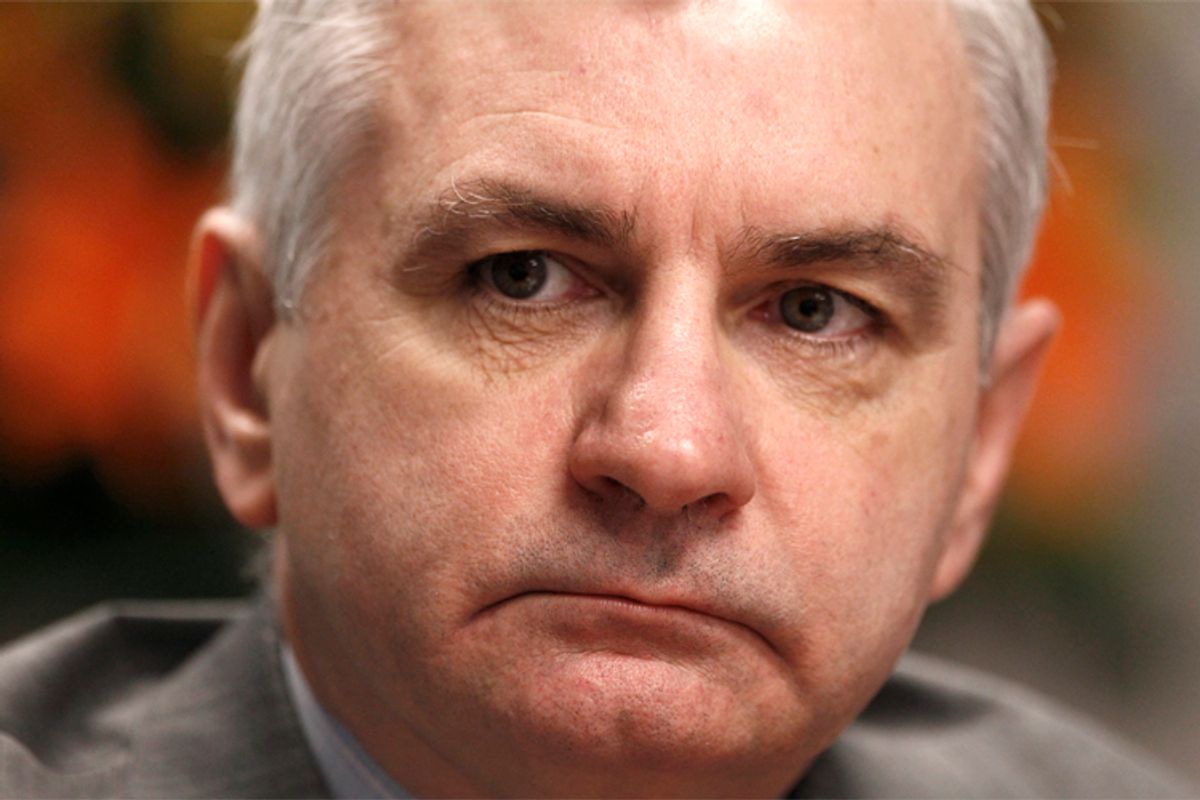 Days after 1.3 million Americans lost their unemployment benefits, the U.S. Senate is set to vote this morning on moving forward with a three-month extension bill. Cloture on the bill, which would need five Republicans to make it across a 60-vote filibuster-proof threshold, last night had public backing from only three.

Citing the claim (made by Tea Party favorite Rand Paul) that benefits are a "disservice" to the unemployed, Sen. Jack Reed told Salon Monday afternoon that some of his colleagues bear "disdain" toward the unemployed, are holding unemployment benefits to a "double standard," and shield their opposition with an "excuse." Reed, the bill's lead sponsor, emphasized his willingness to "work on offsets" once a three-month extension is secured; declined to criticize the exclusion of unemployment benefits extension from last month's budget deal; and considered what he and his peers would do if unemployed themselves: "Frankly I don’t think many of us, if we were looking for a job, would say, 'OK I’ll just go ahead and be a counter person at a fast food place.'" A condensed version of our conversation follows.

If the Senate defeats this proposed extension, what happens next?

We will bring it up again and try to build more pressure. Because this is a critical issue. It’s critical for not just the 1.3 million who lost their benefits a few days ago, but there’ll be another approximately 3 million Americans through the course of the year [who] will lose their benefits as their 23 weeks expire and there’s no extended federal benefits. And this will cost the economy 200,000 jobs going forward -- that’s what CBO says -- if we don’t do it.

So for both the individual issues -- people who worked hard and lost their job through no fault of their own, and they’re competing, in most places, where there’s three people for every one job, it’s not fair -- and for the economy, it doesn’t make sense. We want to be growing the economy. So we’ll keep trying.

Several of your Republican colleagues in the Senate told the Washington Post that they’ll be voting “no” because the bill doesn’t offset the extension with spending cuts. Could we see Democrats agree to further cuts as some kind of deal?

Well, here’s the point: If we want to go ahead and have a thoughtful discussion of offsets, et cetera, then let’s do that in a context of our three-month extension, which Sen. Heller – it’s bipartisan -- and I are supporting.

First, it makes people whole who have lost these benefits. It prevents some others from losing it. And it will give us the time to have a thoughtful, meaningful discussion about do we pay for this, or do we not pay for this.

Typically these benefits are emergency benefits. They’re not paid for, OK? I believe this was extended last year in the tax deal as emergency spending, uncompensated for. So they could agree a year ago to do, which probably meant at least 200,000 jobs to the economy last year. But now they have to pay for it. So it’s kind of a, you know, “sometimes yes, sometimes no.”

I think we’ve got to do it. And we’ve done it in a way that allows us to seriously, thoughtfully, in a regular process, deliberate the program and pay-fors.

Are you willing to make concessions on budget cuts or, as Rep. King suggested, on some kind of deregulation, just to get the three-month extension?

You know, the whole point of a three-month extension is it gives people support while we work out the details. I’ve heard lots of people say, “Well, we won’t pay for it unless there’s offsets.” I haven’t heard a lot of people proposing specific offsets. I’ve head people say, “Well, we’re going to make other cuts.” What cuts? Is it to, you know, to programs that are equally important to people, so you’re robbing Peter to pay Paul?

That’s why we finally came up with, I think, an appropriate response. Which is: Let’s restore these benefits to people who need them, and give us time -- not indefinitely, but just three months -- to work on the program and work on offsets.

So you know, my sense is … it’s an excuse, not a good reason [not] to vote for the procedural motion. And I think the best thing to do is just give us the time to work through it and give these people their benefits.

What’s happened with this debate so far? Does it reveal something about Congress’ responsiveness to non-rich people in the U.S.?

I think it does reveal a sort of a double standard, if you will. I mean, some of my colleagues have characterized these people as unworthy, or the program [as] just encouraging them not to work. When in fact the program specifically requires them to look for work. They’re only qualified for the program because they did work, and they lost their job through no fault of their own. And yet we have programs that are very, very generous to wealthy Americans, that are seen as terrific -- you know, they’re “job creation programs,” et cetera. Even though we tried an experiment through the 2000s, in the Bush administration, of deep tax cuts -- and ended up with the poorest private job creation of any administration in a long, long time. So I think there is this double standard.

But I think what’s happening is these stories have personalized this stereotype, about, “Oh, this is just people taking advantage,” you know, "they don’t want to work.” When you see the stories of middle-aged people who have worked for decades, who are sending out thousands of résumés, who are calling every day -- just today in the Washington Post, there was a story of a dairy operation in Maryland that had a few job openings, and they had about 1,600 applications. So a handful of these people are going to get jobs; even though 1,600 are willing to start work immediately, they’ll take the job. And that’s happening everywhere.

A spokesperson for Rep. Camp said “academic research suggests the program has actually hurt, rather than helped, the job creation that the unemployed need most.” What’s your assessment of those kinds of claims from Republicans?

Well, actually, the author of the study -- I think this was repeated by my colleague Sen. Paul -- indicated that the study has been absolutely misconstrued, that he actually publicly came out and said, “No, that’s not the case at all.” He said what he found is that people who are out of work a long time, when they apply, employers sort of tend sometimes – implicitly, not explicitly -- to favor people who have been out of work less time. That doesn’t, I don’t think, suggest that people who are long-term unemployed don’t want to work, shouldn’t have a chance, et certera. In fact, they’re facing lots of issues.

Some, it’s training issues, where their job was moved overseas or eliminated. I mean, we’re seeing in this recession twice the level of long-term unemployment. And you know, I’m not an academician, but you know just from on the street, a lot of these people are mid-level managers or white collar people -- paralegals, accountants, bookkeepers, et cetera. And one thing that’s faced them is technology and business reorganizations, and factors that are way beyond their control. But now you’re a middle-aged person, you’ve spent years doing a job, and suddenly you’re trying to find something. You can’t find it. You’ve got to do some retraining or et cetera, but that doesn’t happen overnight. And that’s why these benefits help a bit.

And if someone is receiving unemployment benefits and chooses not to take a very low-paying job, is that necessarily a bad thing?

Well, first of all, the benefits are about $300, $350 a week. So this is not a situation where they’re choosing not to take a low-paying job because they’re making more on unemployment.

I think there’s a real issue here – which … I’m very conscious [of], because they’re contemporaries -- of middle-aged people who have had good jobs, good pay. By the way, they’ve got families, some parents to support, children to support. And the other factor, though, is a psychological one: You know, they’re coming to grips with the issue of, “My god, if the only job I can get right now is working at a counter at a fast food place, and I used to be a vice president for sales.” You know, it’s not just the economics – it’s, “What’s happened to my life? What happened to my life?” And so I think in that context, people are making very human … decisions that shouldn’t be disdained.

And that’s one of the things that you’re getting, is this sense of disdain, they should just -- frankly I don’t think many of us, if we were looking for a job, would say, “OK, I’ll just go ahead and be a counter person at a fast food place. Because you know, it’s good. It’s good.” And so I just think there has to be a recognition of what these people are going through.

Well, you see it from the people [who say] this whole program doesn’t work, it’s a “disservice,” et cetera. That, all that stuff.

And it’s not just one person, unfortunately. It’s several people, and sometimes it’s an attitude, not just an explicit comment …

You want to land on your feet; if you had a job that was paying $55,000 a year, you’d like to get something close to that. Everything you’re seeing is half that pay, or nothing at all. You’re saying, “Well, I’m gonna hold on. Maybe next week there’ll be a break. You know, I’m hearing the economy is improving. Maybe, you know, a month from now we’ll start seeing the jobs opening again. As Wall Street’s booming, maybe that’ll translate into hiring.” Et cetera …

These are not irrational thoughts … They’re very human. It’s what I think any one of us would do if we were in a similar position.

Was it a mistake for Democrats not to insist on including unemployment extension in last month’s budget deal?

You can’t look back. You’ve got to look forward. And I think one point that has to be emphasized is that it’s so critical to the overall economy to get the budget deal. And I think we should just be glad we have it. We’ve got two years of predictable budgets and appropriations. I think Sen. Murray and congressman Ryan did a very good job putting it together.

Could they have done more? Perhaps. But I think what they did sort of gives us a foundation, and it allows us to take the fight to the floor on this issue without being in a complete collapse because there’s no budget, we’re doing the continuing resolution, sequestration is still, you know, there.

So I think you have to look at it in a very positive – it’s a step forward. But we’ve got another step to take, and that’s UI.

What forms of leverage do you have to get Republicans to go along with this?

I think the best way is to ask them to listen to their constituents who are losing these benefits ... They worked hard. They just want a chance. They’re struggling.

The press is beginning to pick up on those stories … And I think the other factor, too, is just CBO has already said if we don’t pass these benefits, we’re going to lose 200,000 jobs, because demand, which is generated by this program, won’t be there. And so those people who work in groceries, those people who work in hospitality -- you know they won’t be hired. And the irony, of course: Those people, if they’re laid off, they’ll stop collecting -- at least at 26 weeks.