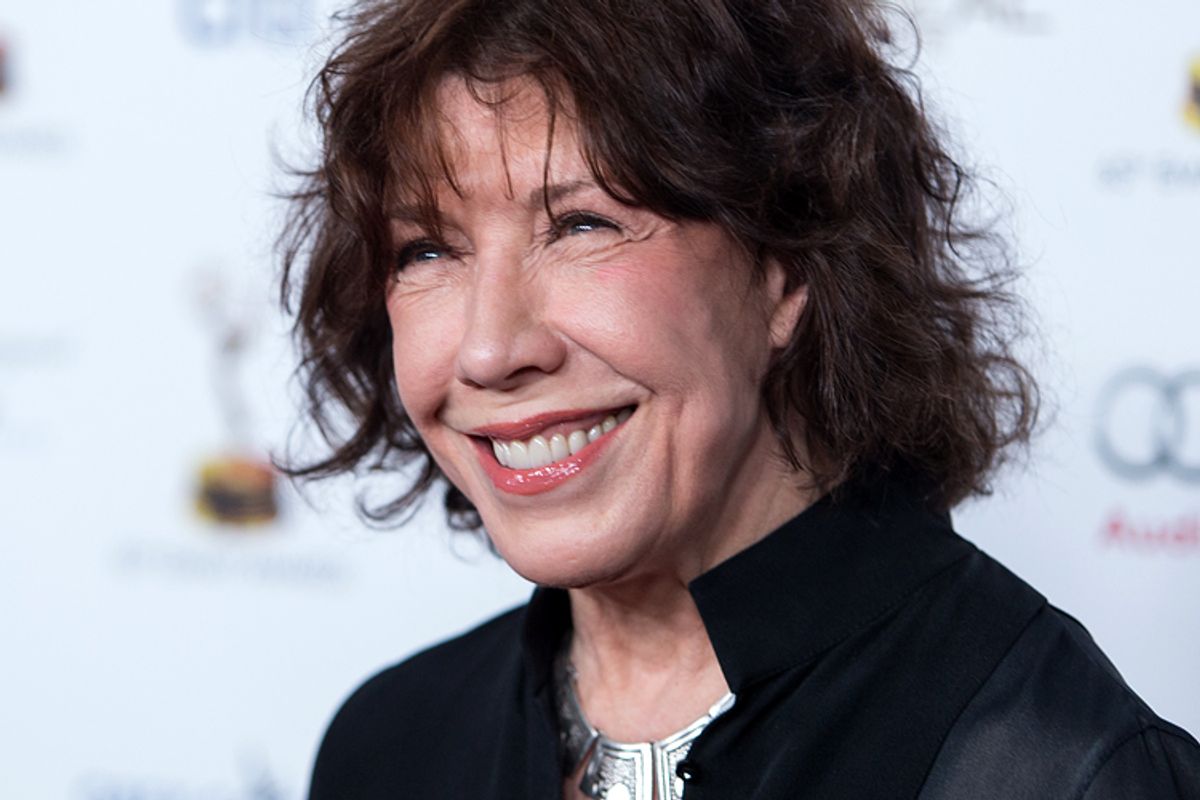 It took over four decades, but Lily Tomlin and Jane Wagner have put a ring on it. Columnist Liz Smith quietly dropped the news of the nuptials in a column Friday, noting, "My longtime friends, Lily Tomlin and her love, the writer Jane Wagner, got married on the eve of 2014 ... My wish is that their happiness will be as great as their combined talents."

The 74-year-old Tomlin, who will be a headliner at Michigan's LaughFest 2014 in March, has spent much of her public life avoiding the image of poster girl for marriage equality. Four years ago, she revealed that when Time magazine offered her the opportunity to come out on its cover, "I was more insulted than anything. I felt it was a bribe: 'We need a gay person, and we’ll take anybody!'" Even when she semi-officially came out in 2000, she insisted, "I never wanted to be anybody’s spokesperson or poster person. You know, I see what happens to too many people." And for her decades-long circumspect approach to her private life, she's faced criticism from other, more outspoken figures.

Yet even as she flew under the political radar, she has subversively used her comedy to make a statement. On her third album, "Modern Scream," she included a bit about an interviewer asking an actress what it's like "to see yourself on the big screen, playing a heterosexual woman." "I've seen these women all my life," she replied. "I know how they walk, I know how they talk." She narrated the 1995 film "The Celluloid Closet." In recent years she's spoken more openly about her experiences in show business and her admiration for how "remarkably wonderful" it is that there's more acceptance now for celebrities who come out.

Yet her approach to officially tying the knot with the woman she's spent most of her adult life with remained openly ambivalent. In 2006, Tomlin spoke out against international opposition to marriage equality by saying, "I am happy for anybody who wants to get married and I think they should have every right to. It is an aggressively negative rejection." But she added, "I am not a religious person and to me it is a kind of imitation of straight society. If anything, we could be more forward thinking and we could maybe create something different." And just last March, during an appearance on "The View," she admitted, "I'm not against it, I support same-sex marriage and I raise money for it and everything else, but I used to facetiously say I don't even want to get into the wardrobe ... We'd like to, but honestly it's a lot to plan. And you got to make hors d'oeuvres and things like that."

But last year's sweeping strides toward marriage equality across the U.S., including June's overturning of Proposition 8 in California, seem to have made her and the 78-year-old Wagner reconsider. After an Academy of Television Arts & Sciences Pre-Emmy Performers Peer Group reception in August, Tomlin told E! she and Wagner never even imagined same-sex marriage in their lifetimes. "You didn't think that would happen," she said. "It's pretty remarkable. We’re thinking maybe we’ll get married. You don’t really need to get married, but marriage is awfully nice. Everybody I know who got married, they say it really makes a difference. They feel very, very happy about it." She promised, however, if they did get hitched, they'd do it their way. "No rings, no bridal dresses. Maybe we'll be dressed like chickens."

Though Liz Smith failed to mention whether Tomlin and Wagner donned chicken costumes, the news is still incredibly smile-inducing. Imagine that life together and all those decades. Imagine going from having Johnny Carson asking you 40 years ago about why you weren't married – at a time when you were already partnered with the person you love -- to being able to finally marry that person. Imagine living most of your life just assuming it wasn't even an option, and reaching at last, in your mid-70s, your wedding day.

Whether gay or straight, marriage isn't a guarantee of eternal love, and you can have a long, satisfying commitment without a piece of paper. Tomlin and Wagner certainly proved that you can build a life without a walk down the aisle. But to have the option, to be able to say, "This is my wife," or "This is my husband" -- that's something to be celebrated and something everyone deserves. And of all the roles Tomlin's played in her life, she saved one of the best for late in the game. Newlywed.