"Absurd on every single level": How the feds may be crippling the legal pot industry

Weed may be legal now in Colorado, but one key detail threatens to boost crime, raise costs and sink the business 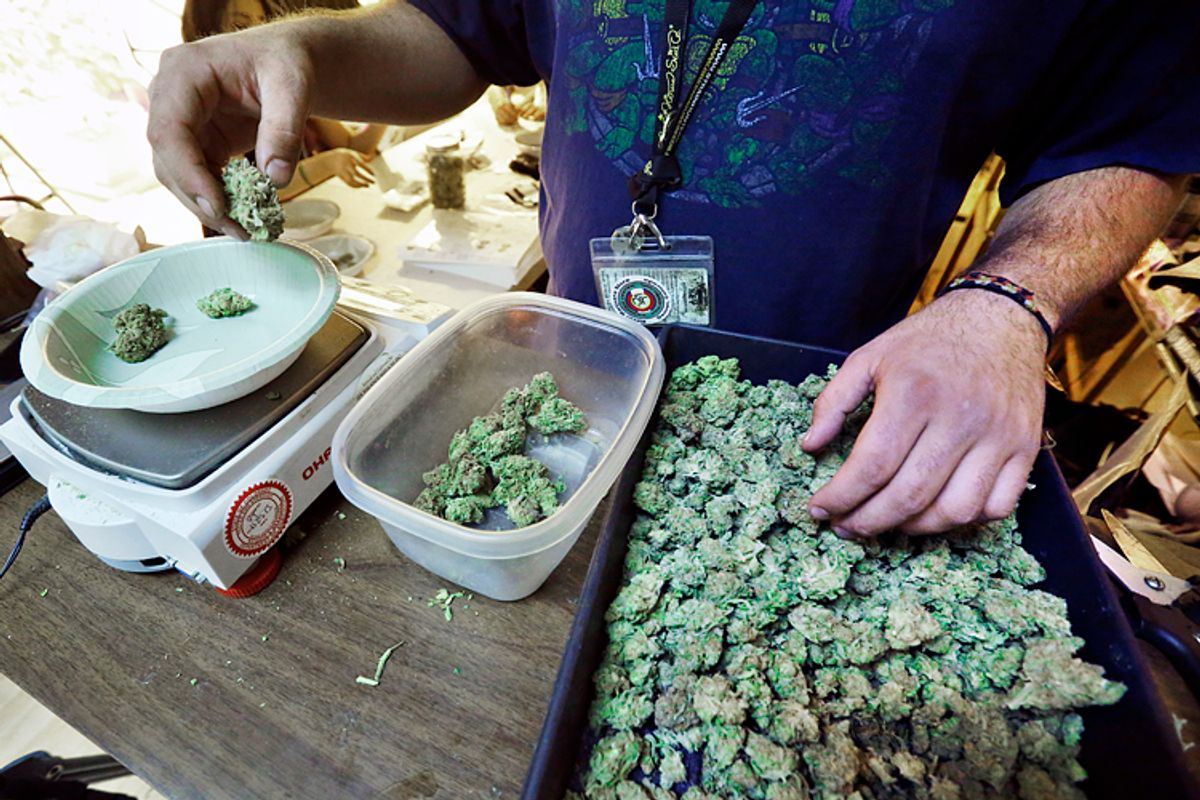 Last week, Colorado became the first place in the world to legally sell regulated and taxed marijuana for adult recreational use. Despite the winter weather, long lines and heavy demand led some stores to jack up their prices or even sell out of product. The early success has elevated expectations for a new “green” economy, with a projected market value of $10.2 billion by 2018, according to Arcview Market Research.

But one crucial detail threatens to hold the industry back.

Because the federal government still classifies pot as a dangerous drug, corner cannabis stores and cultivators cannot secure access to traditional banking services, and do a shocking amount of their business in cash. Banks are reluctant to work with pot-related businesses, out of fear that the government will prosecute them for laundering illegally obtained money. This heightens the potential for crime at pot shops, imposes heavy costs on businesses seeking legitimacy, and could cripple the industry just as it gets started.

“I run a state-approved business, and I don't have the ability to walk into a bank and open a bank account,” business owner Alex Cooley told Salon. Cooley’s Solstice Grown is the first legally permitted cannabis production facility in Washington state, and he sells to multiple distributors. Cooley’s story is familiar in the industry, where everyone is a phone call away from losing access to banks. Solstice had an account with Boeing Employees Credit Union for several years, under what Cooley described as a “don’t ask, don’t tell” arrangement. But when the credit union read about Cooley’s work to become a permitted cultivator, and his advocacy for the state initiative that legalized cannabis for adult use, it canceled his account. “We operated, by their own description, ‘an exemplary account,’” Cooley said. “It’s frustrating, because they were saying to us, ‘we found out about you because you’re trying to be legitimate. So now we’re going to close your bank account.’”

Almost every aspect of a business is affected by a lack of stable access to financial services. Customers cannot pay with a credit or debit card. Shop owners have nowhere to store paper money except in safes or under their mattresses. They cannot pay employees through normal payroll services. They cannot access a line of credit to expand their business. Running a marijuana shop often resembles a bygone era of trudging around dollar bills to pay off creditors. “One of the most memorable stories was about the owner of a medical marijuana store, who walked into a state revenue office to pay his taxes with $40,000 in cash in a big sack,” said Rep. Denny Heck, D-Wash., who is working in Congress on a fix for the banking issue.

Financial institutions don’t want to run afoul of the Anti-Money Laundering Act, which can charge fines of up to $500,000 per transaction for working with companies who sell illegal products. Though Colorado and Washington have been cleared for adult recreational use sales, and 21 states (plus the District of Columbia) have legalized pot for medicinal use, marijuana remains illegal under the federal Controlled Substances Act. Even a state-owned bank, which one Washington lawmaker has proposed, would have to abide by federal banking laws. The discrepancy between state and federal law puts financial institutions at risk of money laundering prosecution, and they want precise assurances before assuming that risk. “They want the safe harbor to be so abundantly clear,” said Rep. Heck. “But at the end of the day, we want banks and credit unions to be excellent risk managers.”

The irony here is rich. A year ago, British-based bank HSBC was fined $1.9 billion for actual money laundering for Mexican drug cartels, suspected of killing thousands of innocent civilians. HSBC had no problem doing very profitable business with the illegal drug trade, and they basically got away with it, with no criminal prosecution and a paltry fine. But in Washington and Colorado, you have legal businesses operating within state law, and no bank will touch them. “I guess they don’t think we’re big enough dollar-wise for them to risk it,” said Alex Cooley of Solstice. “But it’s crazy, in Washington, Bank of America is the state bank. They’ll take our tax revenue from the state but they won’t take our money.”

Bank reluctance also involves paperwork. Under current law, banks must submit suspicious activity reports (or SARs) to regulators every time they encounter a transaction that may involve money laundering. Even after eliminating the possibility of prosecution over legal marijuana shops, banks may still have to file SARs. “Banks want to get rid of reports anyway,” said Rep. Heck.

All-cash operations expose pot shops as a robbery target, as well as the vendors they pay in dollars, and even the customers, who must carry cash to purchase the product. While statistics on crime around marijuana businesses are mixed, working in cash obviously raises the potential. “I'm less safe and my staff is less safe by people thinking and believing that we may have $30,000 in cash on us,” said Alex Cooley. “It’s not fair to put me in harm's way because banks are afraid of working with us.”

Moreover, it makes it impossible for legal businesses to comply with regulations and standards, inviting tax evasion and phony accounting the way any untraceable cash-only business would. Even those with “wink and a nod” bank accounts find business more cumbersome. For companies like Alex Cooley’s, who sell wholesale to marijuana shops that often pay them in large sums of cash, the processing costs can add up. “Cash isn’t king anymore. It can take us multiple labor-hours to process a payment,” Cooley said. “With a check, we take a picture with our phone and file it. We want to have full compliance with the law, but it’s difficult without a paper trail or a digital transaction.”

The Justice Department released a memo last August, reassuring businesses that they would be able to sell marijuana legally under certain strict guidelines. But the memo only referred to criminal prosecutions on possession and use, leaving out money laundering violations, and not giving banks the same peace of mind given to retail marijuana stores. Deputy Attorney General James Cole told the Senate in September that the department was working on the issue, but granting a safe harbor involves multiple banking regulators as well as the Treasury Department’s Financial Crimes Enforcement Network (or FinCEN). “It’s no real problem for Justice to say they won’t prosecute, but Treasury doesn’t operate under a discretionary basis,” said Mark Kleiman, a public policy professor at UCLA who consulted with Washington state in designing its regulatory framework for adult use marijuana. “Treasury has to decide this is legal. They’ve got to figure some way that it's actually OK.”

FinCEN’s director, Jennifer Calvery, told Reuters banking for the legitimate marijuana industry would be addressed in a Dec. 12 meeting of the obscure Bank Secrecy Act Advisory Group, composed of regulators, law enforcement and industry members. That group can recommend policy changes to Treasury, and give guidance to the financial industry. The same day, Dec. 12, Rep. Heck had the opportunity to question Treasury Secretary Jack Lew at a House Financial Services Committee hearing, and he brought up the issue. Secretary Lew deferred to the BSAAG, saying, “Obviously I recognize the serious challenges to this … I look forward to seeing the work that comes out of the meetings that you're describing, and we'll evaluate them when they're presented to me.” Heck was told that Lew’s testimony was placed into a PowerPoint presentation before the BSAAG hours after the exchange. “I was encouraged by the knowing look in Secretary Lew’s eye,” said Rep. Heck. “He wasn’t hearing this for the first time.”

However, a month later, nothing has come out of the meeting. The BSAAG meets in secret, and as an advisory group, it is not subject to Freedom of Information Act guidelines. FinCEN did not respond to Salon for comment. Rep. Heck remains hopeful that regulators and law enforcement will soon issue guidance relieving banks from fear of prosecution for working with legitimate businesses, and relaxing the requirement on submitting suspicious activity reports for every transaction. The chief legal counsel to Colorado Gov. John Hickenlooper said that he expected such guidance to banks by the first quarter of this year.

But even this would only represent a “yellow light” to banks to work with the industry, and it’s unclear whether that would placate financial institutions. Any guidance would still be discretionary, and a zealous prosecutor or a change in administration could reverse that at any time. “It would be completely ridiculous for JPMorgan Chase to accept business from a marijuana shop,” said UCLA professor Mark Kleiman. “Why would they expose themselves to prosecution from President Huckabee's attorney general?”

Rep. Heck and his colleague Ed Pelmutter, D-Colo., have introduced bipartisan legislation that would give legal clearance for transactions with marijuana-related businesses without threat of prosecution. But as marijuana business owner Alex Cooley rightly noted, “bills don’t really make it through Congress anymore.” An even simpler fix would involve the attorney general using his authority under the U.S. Code to remove marijuana as a Schedule 1 drug, eliminating its applicability to the Controlled Substances Act. This is what the financial industry has said would satisfy them. But Eric Holder hasn’t moved on rescheduling in his first five years in office.

Despite the legal framework in place in the states, and the obvious interest many banks have in serving legitimate customers, regulators and law enforcement have not aligned to fix this problem. As a result, every medical or adult use marijuana business in America lives with the uncertainty of having their banking access cut off.

“It’s completely absurd on every single level,” said Alex Cooley of Solstice Grown. “We don’t want to launder money. We pay taxes on everything we do. We’re just not being treated fairly.”