Emails “should remove any scintilla of doubt" he "was fully aware and directed it," Barbara Buono charges 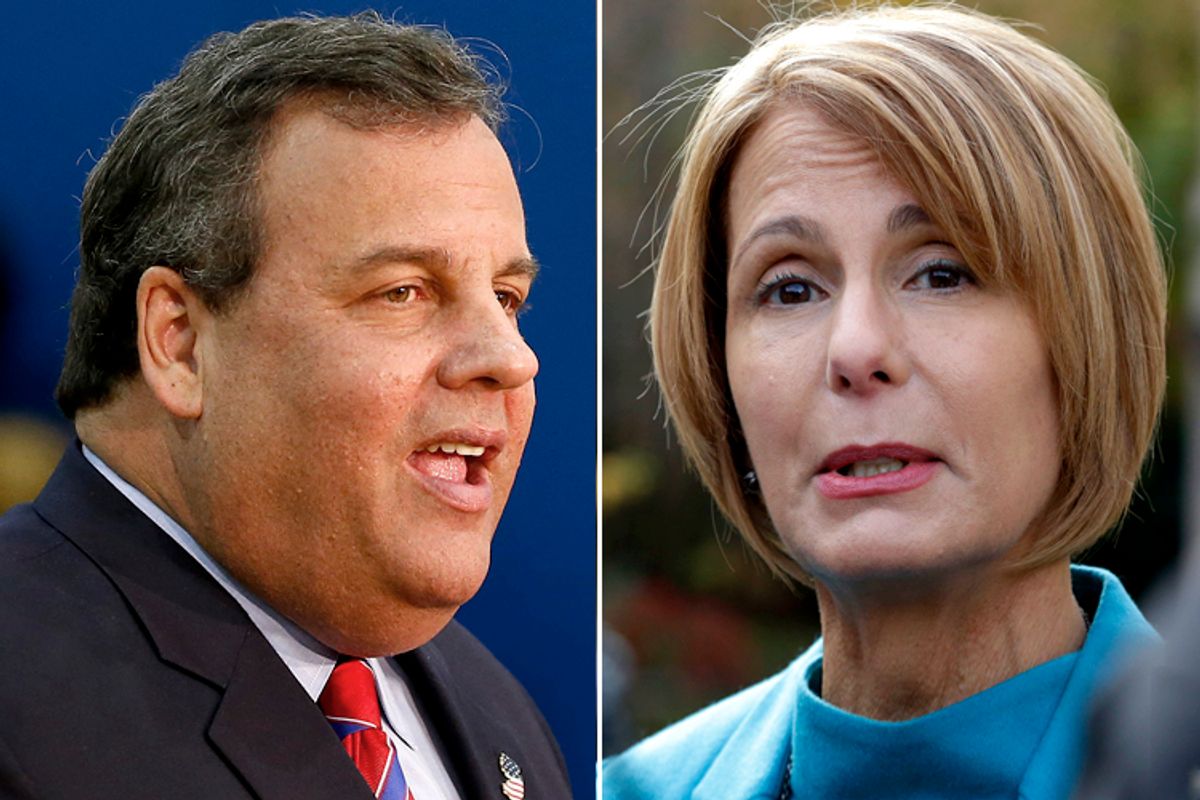 New Jersey state Sen. Barbara Buono blasted Chris Christie Wednesday as a “charlatan” running a “paramilitary operation,” and urged a federal criminal investigation into his administration’s role in alleged retaliatory lane closures that caused a traffic nightmare for Fort Lee, N.J. Buono, whom Christie defeated by 21 points in his gubernatorial reelection campaign last year, told Salon that messages released Wednesday “should remove any scintilla of doubt in anyone’s mind that the governor was fully aware and directed it.”

Those emails and text messages, including one in which Christie Deputy Chief of Staff Bridget Anne Kelly told Christie Port Authority appointee David Wildstein, “Time for some traffic problems in Fort Lee,” have further fueled suspicions that the lane closures constituted retaliation against Fort Lee’s Democratic mayor for not endorsing Christie. After an identified person texted that that they were “smiling” but felt “badly about the kids” affected by bus delays, Wildstein responded, “They are the children of Buono voters.” (A spokesperson for Christie did not immediately respond to Salon’s request for comment.)

What is your reaction to these emails that became public today?

I mean, it’s clear that – They mention me by name. It calls into question all of the other endorsements that he supposedly received, you know, from -- without any threat of retribution … You have to wonder: Who else did he pressure, and what leverage did he use?

I mean, the only reason we know about this is because New York is involved. It clearly reveals something which I talked about during the election and so on last year, which is in this administration, there is a culture of arrogance. It reveals an abuse of authority, and you know, political retribution -- and leading straight to Chris Christie.

“There can’t be a scintilla of doubt” about what specifically?

The level of arrogance is even, you know, shocking to me. It’s just – the web of deceit and subterfuge and political retribution, leading straight to Chris Christie, is nothing short of staggering.

So what specific role are you convinced that Chris Christie played here?

And I think the fact that one of three deputy chiefs of staff was directing Wildstein -- I mean I think that, you know, that should remove any scintilla of doubt in anyone’s mind that the governor was fully aware and directed it.

I think there needs to be a full federal investigation into this. I mean, it’s like I said: He’s a charlatan. This is someone who wants to be president. As I said during the campaign, he is the worst example of a bully and a boss.

When you say “paramilitary,” what do you mean by that?

Who, if anyone, should resign over this?

I think that there should be a federal investigation …

So what should Chris Christie do today?

You should ask Chris Christie that … I can tell you what he’ll do: He’ll just blow it off, and political theatrics, which is what he always does. He’ll make a joke … hoping that people forget about it. But I think that it’s well beyond that at this point. It’s well beyond that.

How does this reflect on the way that Democrats in New Jersey have dealt with Gov. Christie?

Is that a rhetorical question? The governor figured it out early on … there are a couple of political bosses in New Jersey that he threw – you know, he joined forces with Norcross and his agenda, and you know, that really drove the campaign. I mean that was, that’s how his administration has operated …

Most people don’t realize New Jersey is one of the last bastions of boss politics. And the people are suffering because of it. And this is just one example. Who knows what other examples there are that we don’t know about? Like I said, the only reason this came to light is thank god somebody has character and integrity. [Port Authority executive director] Patrick Foye, you know, just was shocked. And you know, he did his job …

The level of arrogance, like I said, is just staggering. They’re annoyed. You know, there’s that tone of annoyance [in the emails] that Foye is messing with them, is what they said, five weeks out of the election …

Here’s a thought: If Chris Christie were the United States U.S. attorney for New Jersey right now, and a Democratic governor had been accused of what the governor’s office is currently involved in or being accused of, Chris Christie would open an investigation immediately. So … at the very least the United States Attorney’s office should do the same.