The media loves to crow that smart, liberated women are hopeless in romance. Actually, the opposite is true 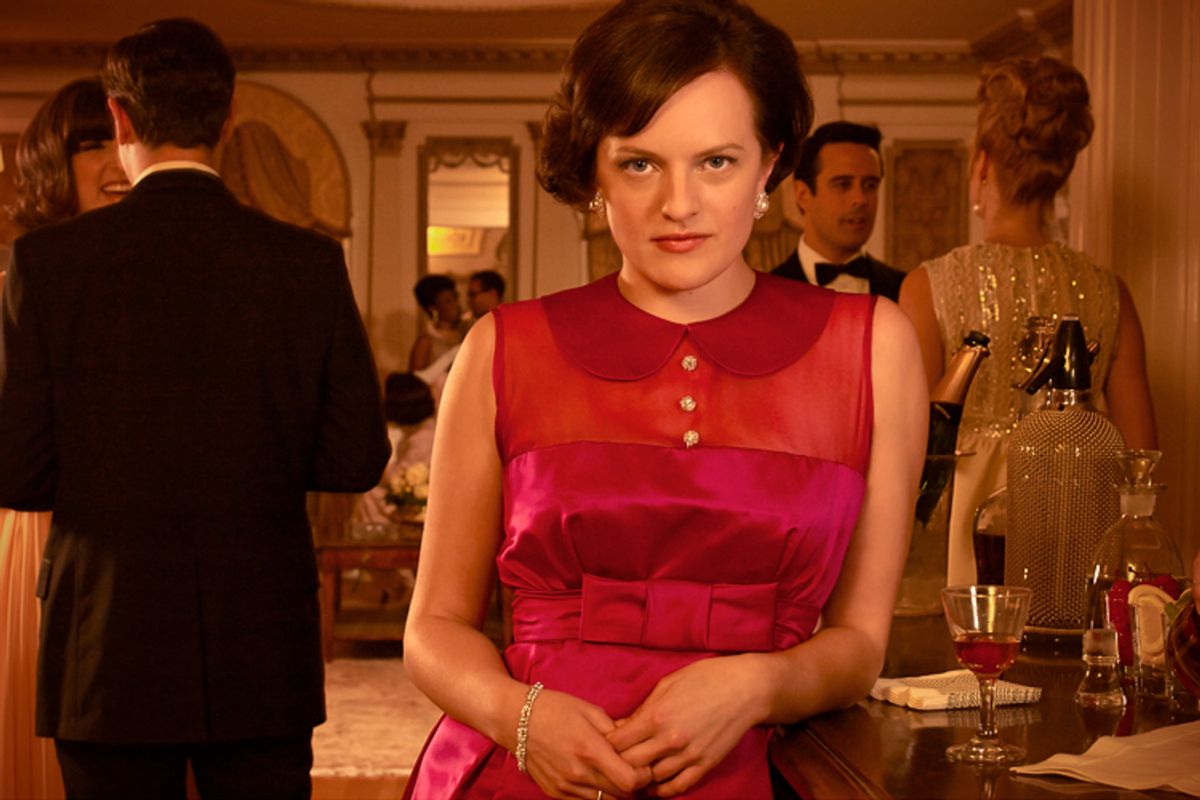 Reprinted from "It’s Not You"

In 1970, an Australian university student scribbled A woman needs a man like a fish needs a bicycle on two bathroom walls—one at a bar, the other at her university. She was paraphrasing a line from one of her philosophy texts—“a man needs God like a fish needs a bicycle”—and having a bit of fun. “My inspiration arose from being involved in the renascent women’s movement at the time, and from being a bit of a smart-arse,” wrote Irina Dunn, who later became a member of the Australian Senate.

Ever since then, Dunn’s moment of cheeky rebellion has been Exhibit A in countless attempts to explain why smart, independent women are so hopeless at relationships. (The phrase is often falsely attributed to Gloria Steinem, who has corrected the error several times.) Like “Free to Be You and Me” and bra burning (which never actually happened, but whatever), the bicycle-riding fish makes a handy cultural shorthand to explain how feminism has messed up women’s love lives.

Most everyone agrees that it’s great that women now can attend college and own property and run for Congress. We can venture into the world on our own, pursue intellectually demanding careers, forge our own identities, and hold out for true love. There’s just one teensy catch: We’ve seriously botched our chances of getting married.

In decades past, the task of telling ambitious women that they’d never find love fell to male editors and reporters, who were unabashed in their contempt for a new breed of she-monster known as the “career woman.” Later, the media let the numbers do the talking, and we got clinical analyses likening our odds of marrying to getting killed by terrorists (a particularly chilling analogy, in hindsight). These days it’s a woman’s job to break the bad news, and often the messenger is single herself, offering up her life as a cautionary tale for the good of womankind.

Regardless of the delivery system, the “doomed career woman” narrative is as perennial as any Disney fable, the theme repackaged and resold to each generation.

Of course, the astute reader will note that the terrorist statistic isn’t true. Susan Faludi’s “Backlash” told us so. And twenty years after the fact, Newsweek apologized for telling college-educated women they had almost no chance of marrying after forty, explaining that the study they cited was wrong because it used past data to make future predictions, never accounting for the changing shifts in marriage patterns over the last several decades—who could have known women in 2006 would behave very differently than women in 1966? “Such unexpected shifts are part of what makes demographic forecasting extremely difficult, not unlike making weather forecasts in the midst of a hurricane,” the editors said.

Husband shortages have another thing in common with hurricanes: There’s always another one coming. No matter what women’s economic and educational gains, someone invariably finds a fresh algorithm to explain anew why smart, independent ladies who wish to wed are screwed.

There’s one problem with all this: It’s not true.

Actually, women with college degrees are more likely to marry than their less-educated peers—and less likely to divorce. Graduate degrees and high salaries also don’t hinder a woman’s chance of walking down the aisle. Sociologist Christine Whelan found that women aged thirty to forty-four earning more than one hundred thousand dollars per year are—once again—more likely to be married than their lower-earning cohorts.

Women are often advised that the best strategy for ensuring lifelong happiness is to snare a man while they’re in school and marry shortly after graduation. But this den-mother wisdom flies in the face of marriage and divorce statistics. The reality is, the older the bride, the stronger the marriage.

Economist Dana Rotz, a researcher at Mathematica Policy Research, found that for every year a woman waits to marry, she lowers her risk of divorce. A woman who marries for the first time in her late twenties (twenty-seven to twenty-nine) is 15 percent less likely to divorce in a given year than a woman who marries in her mid-twenties. If she waits until her early thirties (thirty to thirty-four) that risk drops by another 15 percent. “Marriages made when a woman is in her late thirties (thirty-five to thirty-nine) are more stable still, and fully 46 percent less likely to end in divorce than those beginning when a woman is twenty-three to twenty-six. Up until your early forties, waiting to marry is associated with lower risk of divorce,” she told me.

Rotz notes that the trend could very well continue for women who marry after forty, but researchers don’t yet have a large enough sample size to study it. “Even though marriage after forty isn’t that uncommon these days, we need people to have been married a while back in our data so we know if they divorce. Since later marriages are only now becoming common, we just don’t have the data to know what’s going on,” said Rotz, who conducted this research while obtaining her PhD in economics at Harvard.

I’ll repeat this happy news, since it’s not exactly the message we ladies have received lo these many years: If you get a good education and take time to establish your career and your life as a self-supporting adult, current research shows that you’re not only more likely to marry, you’re more likely to stay married. Oh, and you’ll make more money too.

So why are so many media professionals and policy wonks perpetually convinced that a sharp mind and an independent spirit will ruin a gal’s chance of finding love? “Because it used to be true,” said family historian Stephanie Coontz.

For a long time, having an education did correlate poorly with a woman’s chance of marrying. “It truly used to be good advice for a woman to ‘play dumb’ to catch a man. Not anymore. Women used to be attracted to older, powerful men who earned more money than they did. That is no longer the case,” Coontz wrote in “Marriage, a History.” “Yet many people still plan their personal lives and policy makers still draw up social policies on the basis of these and other outmoded assumptions.”

We also unwittingly reinforce them. We’re so accustomed to viewing professional and personal success as a binary that “focusing on my career” becomes the default answer for singles asked to explain their relationship status.

You know how it goes. You’re at a wedding or a business luncheon and the person sitting next to you asks if you’re married, and you say no.

Then there is that ...  gap. So you fill it in: “My work keeps me so busy. I haven’t even had time to think about dating” or some such.

You say it because it’s true—work has been busy. But, more important, because now is not the time to talk about the many complicated factors that led to you being an unmarried thirty-six-year-old. Now is the time to talk about the price of the euro, or your competitor’s new branding strategy. You aren’t steering the conversation away from your personal life because it’s so dark and disturbing—you’re doing it because you’re a grown-up.

Unfortunately, all this social intelligence has been wildly misunderstood. We have, apparently, left many people with the impression that we’re mapping our personal lives with the same precision that we plot our careers—that we’re “putting off” marriage, as if falling in love was something you could plan. As if we were gazing at our misty-eyed suitors and saying, “You’re amazing and I love you madly. But I’m focusing on my career right now. Sucks about the timing, but what can you do?”

Of course, people do say things like this during breakups. “I just don’t have time for a relationship right now” is a perennial among both men and women. And sometimes we even believe it ourselves—because for whatever reason working late on that marketing report is more compelling than having dinner with Todd.

But that doesn’t mean you’re overly obsessed with your career—it probably means you’re just not that into Todd. You don’t break up with someone you love because “work is crazy.” When you’re in love, you steal whatever precious moments you can. You drive them to the airport so you can have that time on the freeway together. You make out on street corners before dashing back to the office. You have the company car take you straight to their apartment at eleven p.m., and then have it pick you up from there at five a.m. Friends and family are neglected. Houseplants wither and die. Bills go unpaid; dishes unwashed. But you find time for each other.

Feminism’s perpetual PR problem is, paradoxically, rooted in its success. The fundamental notion that women should have equal rights and opportunities was absorbed into the mainstream culture so quickly that we assume it was always thus. It’s easy to forget that as late as the 1970s some women were still being told they couldn’t get a credit card or buy a car without their husband’s permission. When I was a kid in the ’70s, the idea that a woman could have an identity that wasn’t defined by the man in her life was still new—and still up for debate. So if the fish/ bicycle quotation was an awkward overstatement, well, okay. But it was appropriate for the time, and a handy ballast for women in a society that still told them they were nothing without a man.

Feminism never promised women that life would be easy— that there wouldn’t be hard choices and massive trade-offs. It never said that the corporate lawyer who hasn’t had a weekend off in four months wouldn’t at times gaze longingly at the hipster mom knitting a smartphone cozy while her kids play in the park. It merely said she should be free to make her own decisions—and even mistakes—because she’s smart enough to find her own way.

Having agency in your life doesn’t inhibit your ability to merge it with another’s—it only enhances it.

Reprinted from "It’s Not You" by Sara Eckel by arrangement with Perigee, a member of Penguin Group (USA) Inc, a Penguin Random House company, Copyright © 2014 by Sara Eckel.