Even money-obsessed, self-interested jerks like the Koch brothers should back women's autonomy 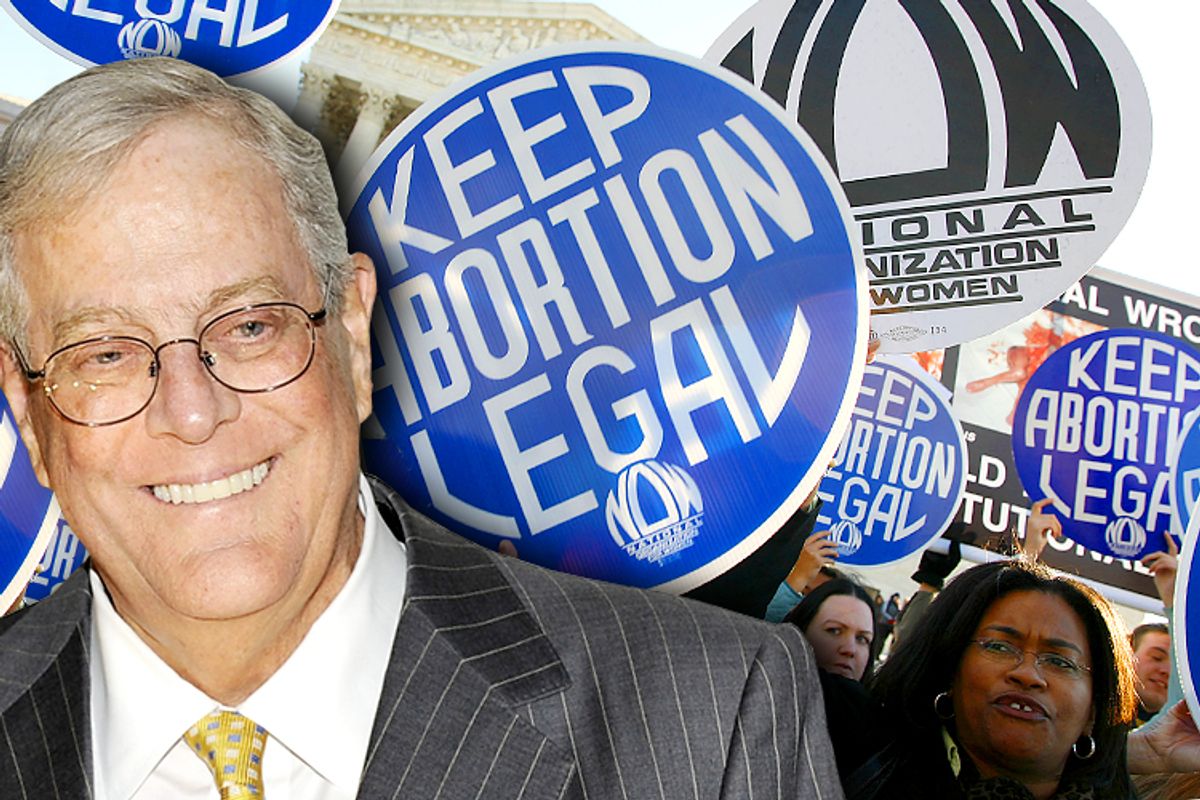 Take a quick look at the Club for Growth website and you will find plenty about how the government is too big, taxes are too high, and "choice" is a fundamental American value -- at least when it comes to (privatized) education. What you won't read is a word about birth control, abortion policy or really anything having to do with reproductive rights. That's because the Club claims not to care about these and other "cultural" issues. Same goes for the billionaire brothers David and Charles Koch, who have been largely silent on the Republican fixation on restricting women's access to basic medical care.

These groups are too busy pushing the virtues of the free market to get mired in the culture wars -- or at least that's what they're saying.

But as was revealed by Jack Craver at the Capital Times on Wednesday, the Club has been funding major players in the anti-choice movement in Wisconsin since at least 2011. A recent piece from Politico on the Koch brothers' "secret bank" also exposed an expansive network of financial ties between Koch-monied Freedom Partners and groups that work exclusively on restricting abortion and access to contraception, like Americans United for Life.

If these groups aren't interested in reproductive rights, why fund anti-choice organizations? (This is an intentionally naive question.) After all, robust support for women's ability to control their own fertility has been shown to have a close correlation with the kinds of economic benefits free market evangelists are obsessed with: Expanded participation in the labor force! More disposable income! Less reliance on public aid!

And while support for abortion rights should need no further justification than the fact that contraception and abortion are basic medical care, this kind of thinking often doesn't register with Club and Koch types. So if these groups don't want to support reproductive rights for the reasons that other (read: not terrible) people support them, here is a brief guide to the creepy, self-interested, tax-averse, free-market reasons the Kochs and Clubs of the political world should stop funding organizations like the National Right to Life and start backing women's bodily autonomy.

When Arkansas' Republican Gov. Mike Beebe vetoed his state's ban on abortion at 20 weeks, he was explicit about the reason behind his decision. "Because it would impose a ban on a woman's right to choose an elective, non-therapeutic abortion before viability, House Bill 1037, if it became law, would squarely contradict Supreme Court precedent," Beebe wrote in his veto letter. "The adoption of unconstitutional laws can be very costly to the taxpayers of our State ... In the last case in which the constitutionality of an Arkansas abortion statute was challenged ... the State was ordered to pay the prevailing plaintiffs and their attorneys nearly $119,000 for work in the trial court, and an additional $28,900 for work on the State’s unsuccessful appeal. Those fee awards were entered in 1999, and litigation fees and costs have increased extensively since then. The taxpayers’ exposure, should HB 1037 become law, will be significantly greater."

The Arkansas Legislature ignored Beebe's fiscal chiding and quickly overrode the veto, even going on to enact a more restrictive -- and more blatantly unconstitutional -- ban on abortion at 12 weeks.

Beebe was right -- legal challenges are costly. South Dakota's attorney general has predicted that his state's restrictions could leave taxpayers on the hook for anywhere between $1.75 million to $4 million; Kansas has already spent close to $1 million defending laws enacted in 2011, and is expected to incur $500,000 in additional costs over the next two years; Idaho has spent $1 million defending similar laws over the last decade; North Dakota, the state with the most restrictive pre-viability abortion ban currently on the books, has already set aside $400,000 in order to defend its six-week ban.

In short: There is nothing fiscally conservative about railroading women's constitutional rights and access to medical care.

But anti-choice (and avowedly fiscally conservative!) politicians don't much care about that, it seems. As Bette Grande, the sponsor of North Dakota's draconian ban, explained when her colleagues voted to criminalize abortion before most women even realize they're pregnant, "I don't look at [the law] from the financial side of things; I look at it from the life side of things.”

A report compiled by the Guttmacher Institute revealed that in 2008, two of three unplanned pregnancies resulted in births that required public funds to cover medical and other costs, resulting in a combined cost to taxpayers of $12.5 billion. According to the same data, more than half of births that were supported through public health programs -- including prenatal, hospital and postnatal care -- were unplanned pregnancies, compared with 36 percent of planned pregnancies.

In Mississippi, a state with incredibly regressive laws around access to contraception and one remaining abortion provider, the proportion of births paid for by public programs was 83 percent. In Texas, a state with a long history of scaling back women's access to family planning, the public cost related to births from unintended pregnancies totaled $1.3 billion.

Other research from Guttmacher indicates that the public funding for family planning services saved taxpayers $12.7 billion in 2010.

If you are inclined to believe that public programs that help people who need help are a bad thing and a "drain" on the economy (as the Club and the Koch brothers are), then supporting robust funding and zero restrictions on access to contraception and other reproductive healthcare is really a no-brainer.

Women who can control their own fertility have higher lifetime earnings.

A recent study by University of Michigan economist Martha Bailey identified a connection between reliable access to contraception and lifetime earnings. “Cheaper and more reliable contraception reduces the immediate and expected costs of delaying childbearing, freeing up resources in the parents’ human capital,” according to Bailey's research. Delayed childbirth allows “soon-to-be parents to get more education, work experience, and job training, and thus increase their lifetime earnings.”

Another comprehensive review of available data collected by Guttmacher shows that granting women aged 17-18 unrestricted access to contraception (at precisely the time most are making big decisions about their future) was closely correlated to women's social advancements in education and the workplace.

More on this point from Guttmacher:

Specifically, these studies found that young women’s access to contraception was a major factor historically in the growing numbers of young women obtaining some college education and pursuing advanced professional degrees, such as in law, medicine, dentistry and business administration. In addition, contraceptive access significantly contributed to young women’s joining the paid labor force and following professional occupations. That trend was tied to advancements in women’s educational credentials and to the recognition by women and their potential employers that women could pursue a career with far less fear of it being interrupted by an unplanned pregnancy. These changes, in turn, contributed to women’s increased earning power and to a reduction in the long-standing gender gap in pay.

If your mantra is "economic opportunity for all," then contraception is a policy agenda you should get behind.

This one is pretty self-explanatory. If you want to preach the gospel of limited government, then preventing politicians from interfering with women's personal medical decisions is part of that. It's really that simple.

There are plenty of Republicans making this exact point. As lifelong Republican and North Dakota state Rep. Kathy Hawken recently told Salon, "[Republicans] need to get out of people’s personal lives ... We shouldn’t be there. We should let church do what church does, and we, as lawmakers, should do what we do. These things shouldn’t be as intertwined as they are."

Oklahoma state Rep. Doug Cox has also urged his fellow Republicans to end their assault on women's reproductive rights in the state and "return" to the limited government tenants that attracted him to the party in the first place.

"What happened to the Republican Party that felt that the government has no business being in an exam room, standing between me and my patient?" Cox asked in a recent editorial. "Where did the party go that felt some decisions in a woman’s life should be made not by legislators and government, but rather by the women, her conscience, her doctor and her God?"