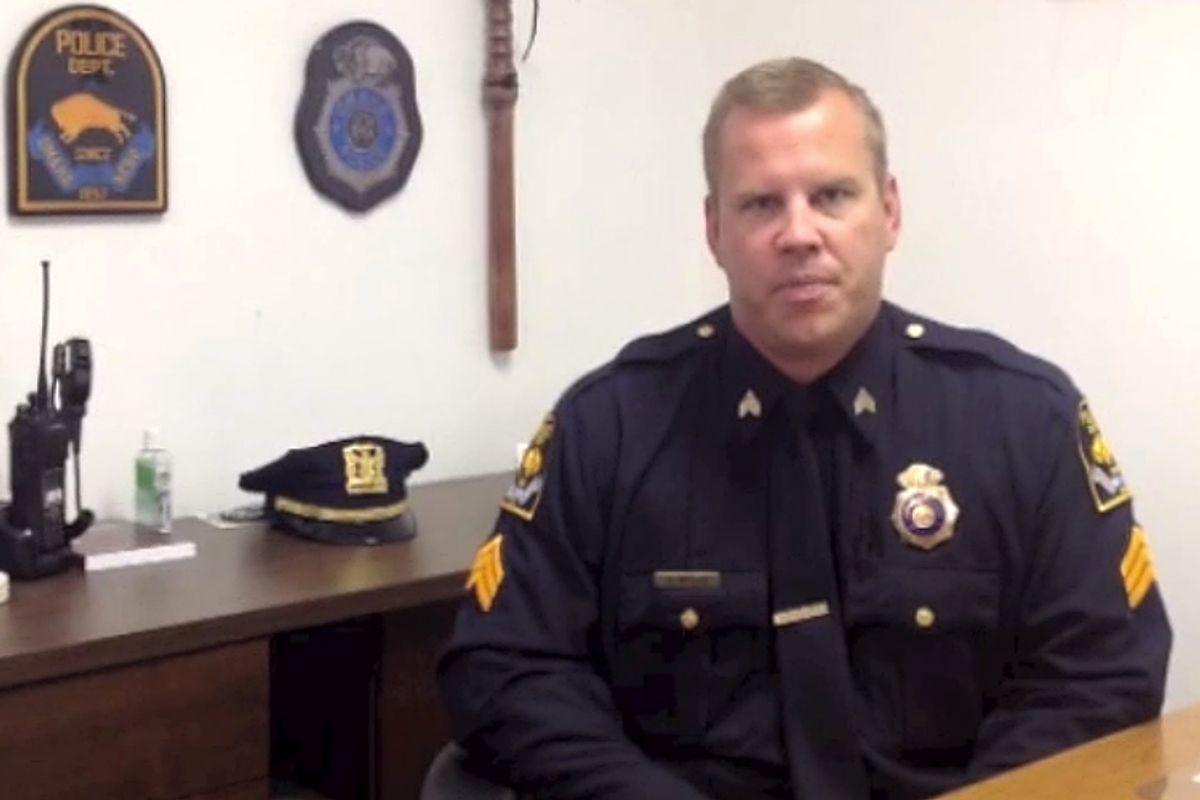 He is, according to the Omaha Police, an example of "the thug cycle continuing." He's a diaper-clad, African-American toddler.

A family member originally posted the video of the baby "gettin curbed" -- being cursed at and encouraged to flip his middle finger and repeat obscenities. "Say 'Bitch,'" a woman tells him. "Say, 'Suck my d---.'" Another then interjects, "That's why you can't fight, p----." They make gang references, asking him "What hood you from, Blood?" and coax him to say, "You a ho, bitch." CNN tallies "at least 35 swear words in the one minute 23-second video." It's undeniably incredibly depressing stuff, a snapshot of a small child being goaded into saying things whose weight he can't even begin to comprehend. But what happened next wasn't so great either.

The Omaha Police Officers Association got its hands on what it calls the "heartbreaking" clip from a "local thug’s public Facebook page" and posted on its own site earlier this week. In a blog post that now appears taken down, Omaha police union president John Wells explained that "We have an obligation to share it to continue to educate the law-abiding public about the terrible cycle of violence and thuggery that some young innocent children find themselves helplessly trapped in ... Unfortunately, there is no crime against raising your kids that way. It is quite the snapshot into violent crime culture happening in Omaha. "

Unnerving though the video is, the police are correct that there's nothing illegal in it. And consider for a moment if that's what truly "unfortunate" about it. Would you really want to be under suspicion of criminal activity if your own toddler ever parroted an obscenity or flipped the bird? Yet despite the total lack of lawbreaking in it, the video's appearance made a swift sensation -- and had immediate repercussions. Omaha police announced Wednesday that the toddler has been placed in protective custody. Fox reports that the police worked with local Child Protective Services "regarding concerns for the toddler's well-being and the investigation did find safety concerns in the home that led to the removal of the four children."

Based on the 93-second clip, that the child needs considerably more positive influences around him is hard to dispute. But by singling out the boy, who is the only person actually shown on the video, the Omaha Police Officers Association seems to have made up its mind that his fate as a future "thug" is all but assured. And for that it has come under fire for fanning the flames of racial discord. The city's Police Chief Todd Schmaderer issued a statement this week "to make it explicit and clear that the views expressed on the OPOA Facebook page do not necessarily reflect the official stance of the Omaha Police Department" and add that "I strongly disagree with any postings that may cause a divide in our community or an obstacle to police community relations." This controversy is likely the last thing the local police feel like dealing with now -- this week 33 of its members, including Schmaderer, were sued for excessive force on an African-American family during a March parking ticket raid.

Black Men United in Omaha executive director Willie Hamilton told Omaha.com this week, "The police actually have a website that is perpetuating mistrust and anger, and I think that is what it is meant to do. I thought posting the video was crossing the line. To use that incident to say that our kids are going to grow up and be thugs is far-reaching and insensitive. We are talking about a child that hasn't even gone to school yet." And if you want evidence of just that mistrust and anger, you don't have to look far for smug commenters sarcastically declaring that the video represents "Another fine example of African American parenting" and deciding "He'll still grow up uneducated and living off welfare. Can't change genetic."

Writing on his Daddy Doin' Work blog last fall – in a post that recently went viral on the Good Men Project -- Doyin Richards amply demonstrated that African-American families are already exposed to bottomless levels of criticism and judgment in the best of circumstances. As he explains, after he posted a picture of himself fixing his elder daughter's hair while nestling his baby in a carrier on his chest, he was inundated with responses. Commenters announced, "He probably rented those kids. They don’t even look like him," "I would bet anything that you’re a deadbeat" and "OK buddy, cute picture. Now why don’t you hand the children back to their mom so you can go back to selling drugs or your bootleg rap CDs?" So what we really didn't need this week was another excuse for racists to have a field day.

Something can be appalling without somebody coming in and making it more appalling. That baby quite likely has enough problems in his young life without now being forced into the role of poster child for "the thug cycle." He has a right to respect and privacy; he has a right to not be exploited to make a point. And those rights were violated. As Willie Hamilton told Fox Wednesday, "It's almost like the kid was abused twice: once by the people in the video and once by the police officers association."