An atheist finally finds someone to take his money

Hemant Mehta wanted to be generous. That's when the trouble started 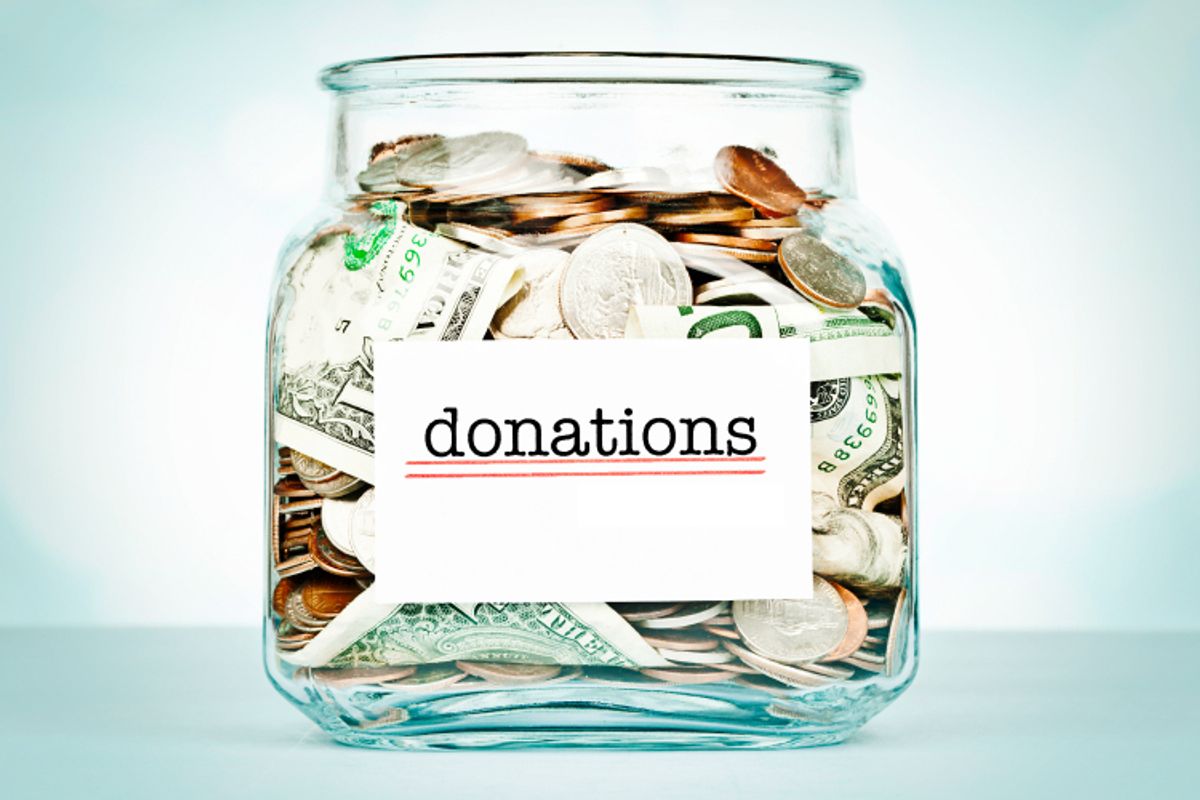 You wouldn't think it'd be a challenge to give away $3,000. Yet as Hemant Mehta recently revealed,  "I can't believe how hard it is." Now, after two months of trying and two high-profile refusals, he's found somebody to take the money he's raised. The Niles Township Food Pantry in Illinois confirmed this week that "It came in as a contribution and it was deposited with the other contributions that came in." But Township Supervisor Lee Tamraz is still cagey about the gift, telling the Chicago Tribune Thursday, "There is a definite need, and I don't want to jeopardize that need."

Mehta first raised the funds after the American Legion Post 134 yanked all of its financial support for the Park District last fall because Commissioner Dan Ashta declined to stand for the Pledge of Allegiance. The group vowed to withhold support unless Ashta agreed to rise for the Pledge or resign. Commander Joseph Lampert told the Morton Grove Champion at the time, "We feel that it’s disrespectful to all veterans that have been willing to sacrifice their lives for this country and it is a great dishonor to all servicemen and women who have paid the ultimate sacrifice and died for this country." Ashta, meanwhile, said that he wanted to make it clear that he wanted people – especially those with political or religious objections -- to know it isn't a requirement to stand. The Legion's decision cost the District $2,600 in funding.

But when Mehta asked his readers to pitch in to make up the difference and they rallied their support, Park District officials flatly refused the check, saying the district "has no intention of becoming embroiled in a First Amendment dispute." Mehta, now faced with the unusual dilemma of having a few thousand dollars and a recipient who didn't want it, next went to the Morton Grove Public Library. The library's rejection was even firmer. During a debate over whether to accept the money, trustee Cathy Peters cited some of the more incendiary commenters on Mehta's Friendly Atheist Facebook page and said, "They’re a hate group," and asked, "Would you take money from the Klan?" Mehta argued, "I get 2,000 comments a day and don’t always look through all of them. Anyone who operates a forum understands that. I stand by my own posts, but them being bothered by random comments is a weak argument." But the library stood firm.

Finally, this week, he found a home for the money when the Niles Township Food Pantry deposited it. Supervisor Lee Tamraz told the Tribune, "It's immaterial to me who the individual is making the donation. We should be appreciative of the donation and make sure it is used to the benefit of the people of Niles Township. I'm grateful for the $3,000." And he added, "On the days we distribute food … when you see the long line, you can't help (but) get emotional."

It's understandable that an organization would want to be careful about whom it's getting its gifts from. Acceptance can be construed as support for the giver's ideals, or taking sides. So Cathy Peters' Klan question is a fair one -- two years ago a Georgia Klan chapter attempted to adopt a stretch of highway, and was politely turned down. But the fact that Mehta calls himself the Friendly Atheist should be a reasonable tip-off that he's not leading a hate group. Sure, there are hateful nonbelievers in the world just as there are hateful Christians. But what matters most for all of us, more than what we believe, is how we behave. Nobody has a monopoly on kindness or generosity. It was petty and hurtful for the American Legion Post 134 to yank its support for the Park District in an attempt to bully Dan Ashta. It was silly of the district, and then the library, to turn away money that could have been used to help the people of the community, because they were uncomfortable with the source. But the silver lining in all of this is that now a food pantry is going to be able to help more people because a writer and his readers took an action. Religion or lack of it should have nothing to do with basic human compassion. And if you'd like to join in and aid the over 5,000 individuals the Niles Township Food Pantry serves, you can too.