Amid polar vortex and state of emergency, workers defied a boss who told them to stay on the job 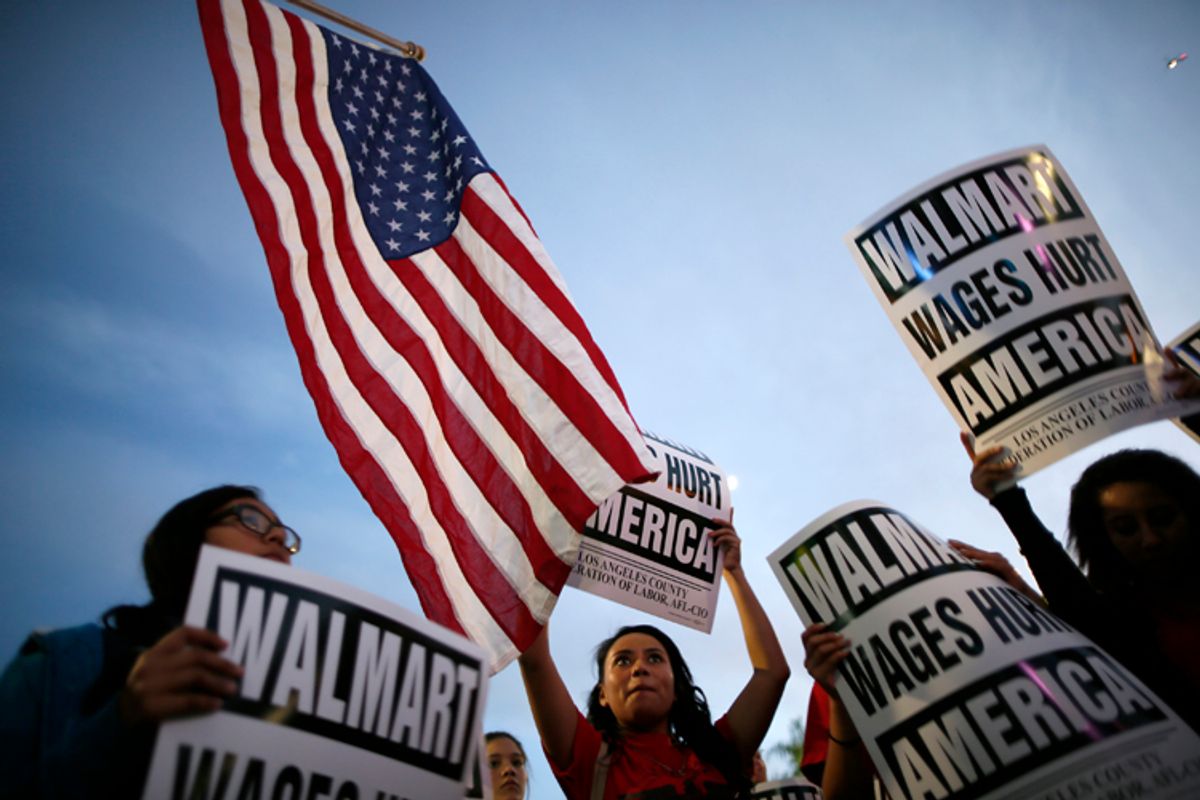 Subjected to sub-zero temperatures and compelled to work despite a state of emergency, sub-contracted Wal-Mart warehouse employees halted work and forced their boss to shutdown the building, according to a union-backed group.

“They are running a slave trade,” charged Dion Stammis, an employee of Linc Logistics, the company contracted by Wal-Mart to run the Hammond, Indiana facility. Linc’s parent company, Universal Truckload Services, did not respond to multiple requests for comments; neither did Wal-Mart.

The Warehouse Workers Organizing Committee, a labor group backed by the United Electrical, Radio & Machine Workers of America union, started organizing last year against alleged abuses in the Hammond warehouse. (The same group supported 2012’s multi-week work stoppage at Wal-Mart’s top U.S. distribution center, in Elwood, Illinois.) They allege that unaddressed issues including broken dock doors and lack of heaters leave the warehouse’s workers exposed to snow, rain, ice, and freezing temperatures. WWOC organizer Sean Fulkerson told Salon that the facility “had torpedo [gas] heaters before Wal-Mart got the contract,” but “when they switched it over to a Wal-Mart facility they pulled out the heaters” because “they didn’t want to pay the gas bill.” Now, he charged, “people were getting written up for going to the bathroom and trying to warm their hands under their hand driers.”

When Linc switched sub-contractors last fall, WWJ alleges workers were told they would have to re-apply for their jobs and pay $40 each for background checks; organizers say the company backed down – and employees not only kept their jobs but got a rare raise - after a delegation of community activists and Wal-Mart retail employees confronted management in support of the warehouse workers (captured on the campaign video below).

Linc labor strife escalated during a Sunday evening shift on January 5, after county officials declared a state of emergency due to extreme weather, ordering non-emergency vehicles off the road. Organizers say employees of Linc and its sub-contractors were working in temperatures of negative 15 degrees, as worsening weather meant mounting risks if they were required to stay until the scheduled late-night end of their shift.

Stammis told Salon that he and other employees repeatedly went to management that evening seeking permission to leave early, but were rebuffed. “We’re like, ‘What’s going on, the whole world is shutting down outside,’” said Stammis. “He’s like, ‘No, get back to work, we’ve got to work until we finish everything.’”

“We got really, really mad,” Stammis told Salon. “This dude doesn’t really give a crap about us.” He cited tires freezing, a vehicle repeatedly getting stuck, and snow piling up on the dock. “The temperatures are dropping,” said Stammis, and “the wind was just blowing, ripping through.”

After being repeatedly turned away, Stammis said, workers took up a more dramatic form of protest: “Basically we all stopped work.” Instead of moving goods, Stammis told Salon, nearly all of the dozen employees on site started looking up weather info on their cell phones as ammunition to collectively confront their boss. Seeing what was happening, Stammis said, their boss came over and told them to finish up certain tasks and then “get the hell out of here,” a few hours before the end of their scheduled shift. Management also shut down the warehouse all day on January 6.

The Hammond conflict – one front in union-backed efforts to wrangle the Wal-Mart supply chain – continued once employees returned to the warehouse. Organizers say they've informed OSHA a worker suffered frostbite after being required to come back to work in sub-zero temperatures on January 7. Last Thursday, workers presented management with a “We’re Not Going to Freeze For Freight” petition demanding heaters, and requested the company release OSHA logs. “The only places with heat,” said Stannis, “are the office and the breakrooms.”

While Linc directly employs him and its sub-contractors directly employ most of his immediate co-workers, Stammis contended Wal-Mart “should have the most responsibility” for the conditions in which they haul its products. “They revere Wal-Mart as gods…” he told Salon. “Our boss always says, ‘They’re our number one customer,’ meaning the customer is always right.” Stammis added, “They are running a complete slave trade under everybody’s nose.”