“If they had said the Nation has too many black people writing about civil rights, wouldn’t people object?”(UPDATE) 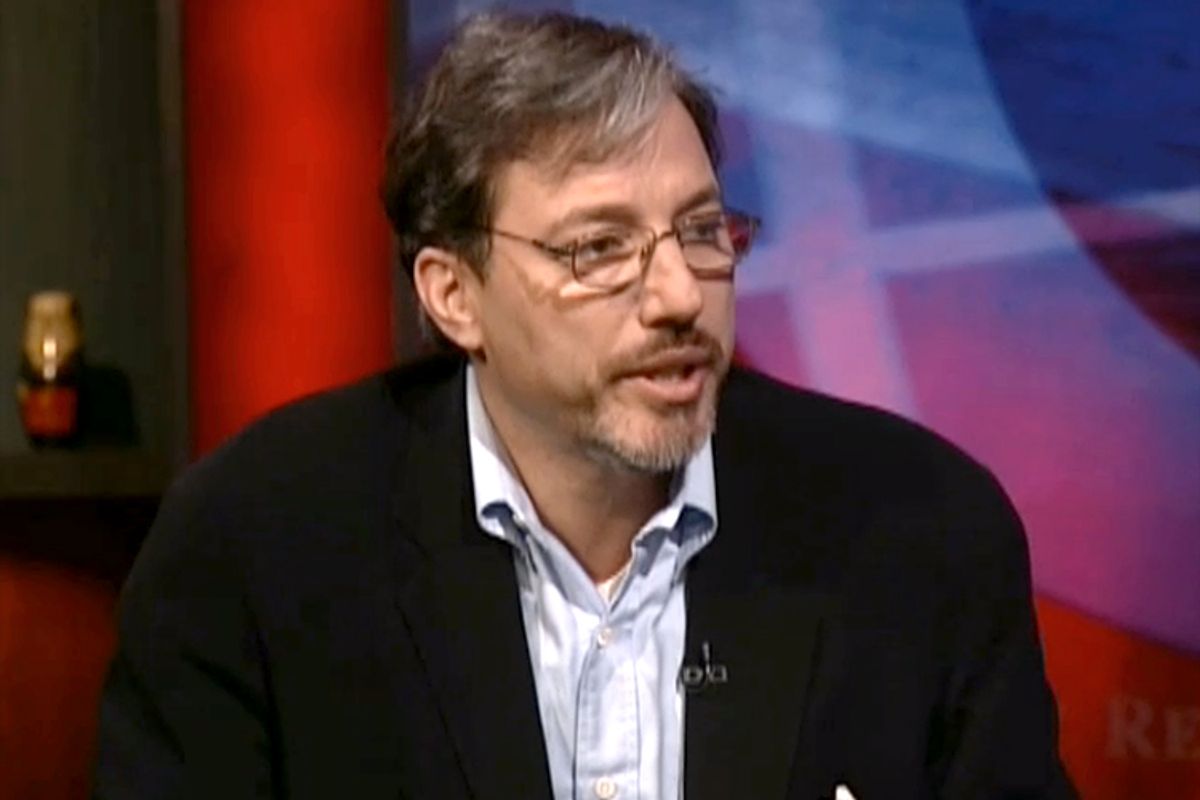 He's not deterred by what they write in the comments. He's not deterred by the “thousands” of 140-character assaults on his character he has received on Twitter. And he's not deterred if the magazine he works for says he was wrong to suggest last week that a critic of its Israel-Palestine coverage approached anti-Semitism. Eric Alterman -- longtime columnist at the Nation -- says in an interview with Salon that he will continue standing up for the state of Israel.

Someone has to, Alterman would say.

Few American publications publish more articles critical of the state of Israel than the Nation -- but relative to the number of those written by people who identify as Jewish, few of those critiques are authored by Palestinians. Writing for the Electronic Intifada, journalist Rania Khalek argued that while the magazine has published numerous articles in support of the Palestinian cause, it nonetheless “reinforces Israeli apartheid by privileging Jewish voices over Palestinian ones.”

To editor Richard Kim, that was unfair. At the Nation, he rejected the charge that “we have failed to include Palestinian writers in our coverage of the Israeli occupation,” though to be fair that is of course a different charge than the one that was made. Alterman, however, took it a step further: Khalek’s critique (and a post about her article at the site Mondoweiss) wasn’t merely mistaken, in his view, but something more.

“[S]peaking of The Nation,” Alterman wrote on his blog hosted by the publication, “have you noticed what the the magazine’s real problem is? Too many Jews!” Sarcastically saluting Mondoweiss and Electronic Intifada “for their belated commitments to honesty and transparency,” he wrote that it’s “always nice when people who pretend to care about one thing admit to their actual motivations, though I do wish each would clarify just how many Jews are too many.”

That post not only prompted a backlash on Twitter – Alterman is accustomed to those since he first criticized Nation colleague Max Blumenthal last fall for writing a critique of Israel that he claimed “could have been published by the Hamas Book-of-the-Month Club” – but also a “clarification” from Alterman’s editors: “This blog post mischaracterized recent articles ... The writers of those pieces did not argue that ‘too many Jews’ write for The Nation; they pointed out that The Nation has published more Jewish than Palestinian voices.”

That clarification was appended as Alterman spoke to Salon on Monday morning. During the interview, he stuck to his original analysis.

“By essentializing Jewishness rather than a viewpoint, they are calling attention to a person’s identity,” said Alterman, “and that, to me, it’s not quite racism because Jews are not a race, but it is highly objectionable and anyone who cares about freedom of discourse should be troubled by it.”

What if the critique were that the magazine was not publishing enough black people writing about civil rights? Or enough women writing about abortion? Both, it seems, would be rather uncontroversial critiques in liberal circles. Would not Alterman himself critique a think tank hosting an all-white panel talking about the problems facing “urban America”?

“If the Brookings Institution were having a forum on urban America, would I insist that a black person be in there? No,” said Alterman. “I would insist that people there know what they’re talking about and have good evidence to support their arguments.”

Fox News could always find someone to provide an African-American stamp on a right-wing agenda, no doubt. But is there not something to be said for diversity? Even the hypothetical "best" white person with the most correct of political views has blind spots -- and no amount of empathy can replace the experience of, say, growing up wealthy in the suburbs with growing up poor in the city.

The focus should be on views, not backgrounds, according to Alterman, as identities are not “useful signifiers when it comes to intellectual discourse.” Indeed, “I think they are reductive and a means of avoiding the issue. And there’s no better example than Israel-Palestine because of all the Jews who hate Israel and would like to see it disappear.”

There is little doubt that many of the leading critics of the Jewish state are themselves Jewish. In her piece for Electronic Intifada, Khalek herself noted that most of those writing in the Nation in favor of boycotting Israel are Jewish-American. But Alterman said he respects their right to an opinion and, though he’s in the minority on the issue, he admires his editors’ commitment to allowing a diversity of opinions (if not always writers).

“I know who the people are at the Nation who would like to see Israel disappear and are anti-Zionist to the core. They have that right,” he said. It also provides him motivation.

“I would wish that the views I hold would be better represented in the Nation but, as it is, I’m really the only person as far as I can tell who cares deeply about the continued existence of Israel who writes regularly at the Nation. So for my own sanity and, I like to think, the honor of the Nation, I write about it with a lot more frequency than I otherwise would because to be honest, I don’t think it changes anyone’s mind."

And Katrina vanden Heuvel, editor and publisher of the Nation, told Salon he is free to do so.

“In general, I believe there must be room for debate in the Nation,” she said in an email. “While we insist on factual accuracy and strive for fairness, I do not believe in policing the views of our columnists.”

"This piece is perfectly accurate insofar as it goes, but I fear it leads to a misleading impression of my views. In reading it, you'd never know that while it’s true I have no use for the BDS mob, the vast majority of the pieces I’ve written about Israel have been deeply critical of Israeli government policy, the occupation, and the Neocon cheerleaders who attempt to police the discourse on both. Indeed the attempt to shut down legitimate criticism of Israel, its ruinous occupation of Palestinian lands, and its refusal to negotiate a good faith two-state solution via the use of the frequently false accusation of anti-Semitism or Jewish-self hatred has been something of a hobby horse of mine. For instance:  Here is one recent example from The Nation. Here is one from The International Herald Tribune. Here is one from the Center for American Progress. Here is one from The American Prospect. Here is one from The Daily Beast. Here is one from The Forward. And here is one from Moment, etc., etc. True, I am a staunch defender of Israel's right to exist, but I do not and would not defend its government's actions that seek to extend its borders beyond those of the 1967 Green Line nor its discriminatory treatment of Palestinian Israelis or the occupied populations of the West Bank and Gaza. These are anathema to me, and I have frequently said and written as much."