What's next in the Christie probe: Head of N.J. Assembly committee talks to Salon

When it comes to the bridge scandal, Gov. Christie's "explanation is hard to believe," John Wisniewski tells Salon 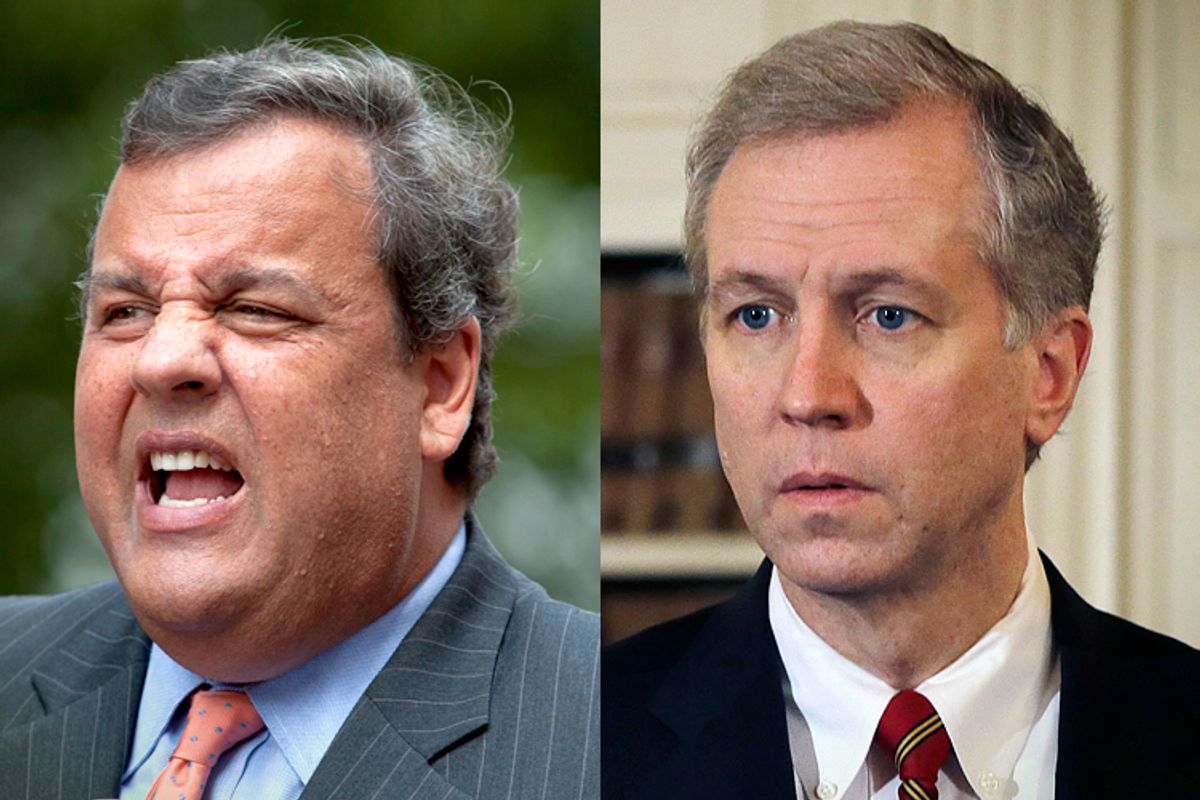 In a brief but much-anticipated portion of his Tuesday State of the State address, New Jersey Gov. Chris Christie acknowledged that “Mistakes were clearly made,” and pledged to “cooperate with all appropriate inquiries” in the developing scandal over apparently retaliatory lane shutdowns on the George Washington Bridge. Those inquiries include planned special investigative committees in the state Assembly and Senate, announced Monday on on the eve of the new legislative session.

Interviewed Tuesday afternoon, Democratic Assemblyman John Wisniewski, who will head the Assembly probe, called Christie’s narrative “hard to believe,” and his choice not to question a top aide who sent an apparent smoking-gun email “a very big omission” that would suggest “a remarkable lack of curiosity for a former U.S. attorney.” Wisniewski, who as chairman of the transportation committee has led the investigation to date, argued that documents released so far suggest a Christie administration “enemies list.” He contested Christie’s attempt to distance himself from appointee David Wildstein, and to distance still-serving appointee David Samson from the scandal.

“There’s somebody who gave Bridget Kelly the order to do this,” Wisniewski told Salon, “and so we need to follow that trail.”

The lawyer of [former Christie-appointed Port Authority official] David Wildstein  seemed to imply he’d have more to say if he got immunity.

Will that happen? And do you expect more officials you call will plead the Fifth?

We’re going to continue to pursue all of the information on a piece-by-piece basis. We started looking at the Port Authority operations and finances, which took us into the inquiry about the traffic lane diversion, which ultimately led into the governor’s office and evidence that not only were official government facilities – the bridge – used for political purposes, there was a very big effort to cover it up.

Do you have a sense of who spearheaded that coverup effort?

Well, it looks like a collective effort … Communications started coming in right after the lanes were closed. And there were many instances in which [Fort Lee] Mayor Sokolich tried to contact the Port Authority, [Christie appointee] Mr. [Bill] Baroni. And there’s a whole chain of emails where they basically make the point that they’re not going to call him back. There’s one that says, “Radio silence.” There’s another [sentence] which really is ominous, in the sense that it really implies an enemies list: An email that says, “His name comes right after Mayor Fulop,” someone else the administration was unhappy with.

So it seems like, you know, they were deliberately avoiding his calls because they were mad at him. Which is reprehensible when you’ve got an entire town shut down, a lost child who the police department can’t find because of the traffic, a cardiac arrest that first aid squad were delayed in responding to.

We don’t know right now. I mean, we saw one email that certainly seems to indicate that they had two enemies: Mayor Sokolich and [Jersey City] Mayor Fulop. We don’t know if there are more names on it. But to make the implication, as was clearly made in the email, that we’re not going to call Mayor Sokolich back because he’s on the list right after Mayor Fulop is a very ominous sign that this is an administration that took their public obligation to respond to elected officials, and they treated it as some type of political sport.

Gov. Christie said he dismissed [Deputy Chief of Staff] Bridget Kelly without questioning her about the scandal because he was “not interested in the explanation” from her. What do you make of that? And how does that impact your investigation?

Well, it seems like a very big omission, by a former U.S. attorney, to not make any even modest inquiry [to] an employee as to “Why’d you do it? Who told you to do it?”

I mean, it seems to me that at a minimum, if he finds out one of his most senior advisers sent an email to close down traffic on the George Washington Bridge -- if he’s really earnest in his statement that he wants to get to the bottom of it -- the first thing you do is you say, “Bridget, why did you send this email?”

And so you know, you take that lack of curiosity, and then you take his other statement: I have a very big staff, so I gave them an hour to tell me what they knew. It’s over a hundred people on that staff. Sixty minutes to thoroughly examine your staff? Again, we’re not talking about anybody; we’re talking about a guy who used to do investigations before breakfast.

Is it conceivable to you that all of the statements Chris Christie has made about this scandal since September have been fully honest?

Well, I think anything’s possible. I think that his explanation is hard to believe.

He made a statement the other day, in his two-hour apology, that you know implied that he barely knew David Wildstein. And yet on or about Sept. 11, there’s a photograph: David Wildstein, [Christie-appointed Port Authority chairman] David Samson, Bill Baroni and Chris Christie walking together talking. Not as strangers – talking. An animated conversation. And this is one of the days that Wildstein and Baroni are getting peppered with emails about the lane closures, about Mayor Sokolich being upset about the lane closures and wanting answers.

And this is the very beginning of the process in which they were trying to spin that to the press. It’s the very beginning of the process in which, remember, two days later Pat Foye sent out his emails. The executive director [Foye] saying that he was reversing the lane closures, that he thought laws were broken. In response to Pat Foye’s email, David Samson, who was in that conversation with the governor a few days before, was absolutely livid, and said that Pat Foye was “playing in traffic,” and who does he think he is, some kind of white knight riding in on a horse.

It’s an over-the-top response for, you know, somebody who -- at least as we’ve been told -- really had nothing to do with it.

You know, the governor said the other day he talked to David Samson, and David Samson – I’m paraphrasing – essentially assured [him] you know, there was nothing, he was not involved. Well, why would Samson be so livid about Foye shutting this down if he knew nothing about it? It made no sense.

Steve Kornacki said he’s heard that there’ll be pressure not to subpoena David Samson. Is that something that you believe is correct?

Well, this committee, the assembly committee, is going to focus on wherever the trail leads us. And if we have to subpoena David Samson, Bridget Kelly or anybody else in that chain of information we have so far, we’re going to do it.

And what would be the threshold for subpoenaing the governor?

I think it’s a premature question. Because we know it’s in the governor’s office. You know, we know Bridget Kelly worked in the governor’s office, used her personal email to send this email, which raises a lot of speculation that it had some political or improper purpose, and we know that there’s really no good reason for shutting those lanes down. But as of now, we don’t have a document that goes back to the governor.

We have a lot of people in his upper echelon circle, who all seem to have known about the lanes being shut down, the turmoil because of the lanes, the protests from Mayor Sokolich, and then the efforts to conceal what was happening. And so I go back to my statement that it’s hard to accept at face value what the governor said, with so many of his senior circle around him apparently having some knowledge of it.

You have to put this in the context. It was an election year. When you’re running -- any officeholder running for election – people around you, they make sure you’re informed, they try to protect you from saying the wrong thing, they try to make sure you have the right information. So it’s hard to believe that one of the people who is in receipt of this not only is [senior aide] Regina Egea, who is scheduled to become his new chief of staff, but Charlie McKenna, his chief counsel.

An email that says laws were broken. You’re the governor of the state of New Jersey. Someone is accusing one of your high appointees of breaking laws. It’s hard to imagine that somebody senior in the governor’s circle didn’t say: Governor, you just ought to see this. Somebody’s accusing Baroni or Wildstein of breaking laws…

[Christie’s] answer has always been: Well, I do a lot of stuff every day, and I can’t be involved in every issue. It’s not every issue. Someone is saying your senior appointees are breaking the law.

At what point does this become impeachable?

Well. It’s not right now. And, to your other question – premature. Clearly, the Assembly has the ability to adopt articles of impeachment if there’s evidence of a high crime or misdemeanor. But we’re not there. We’re just not. We’re not even close.

We know there are misdeeds in the governor’s office. We know they occurred, and they were committed by high-ranking officials. We believe that there are other people in that operation who have knowledge, who are not being entirely candid.

There’s somebody who gave Bridget Kelly the order to do this, and so we need to follow that trail. Where it leads, we will continue to follow.

And who are the candidates in your mind who could have given Bridget Kelly that order?

We’re going to continue to look at the facts. You know, I’ve been trying to do this [on] a step-by-basis.

We know that Bridget Kelly sent the order. We don’t know who told her to send the order…

We also know that it’s inconceivable that on her own, she came up with a cryptic message, and sent it to somebody who cryptically responded back, and they both knew exactly what was meant. There had to be a meeting before, a discussion before. We need to find out who was at those meetings, and what happened in those discussions. We have a lot of unanswered questions …

What else should Chris Christie have been asked by reporters at his press conference?

Why didn’t you spend more time interviewing your staff and asking what their involvement was? It just seems like a remarkable lack of curiosity for a former U.S. attorney.