Hunter: "I want to be intimately involved with a black rhino" 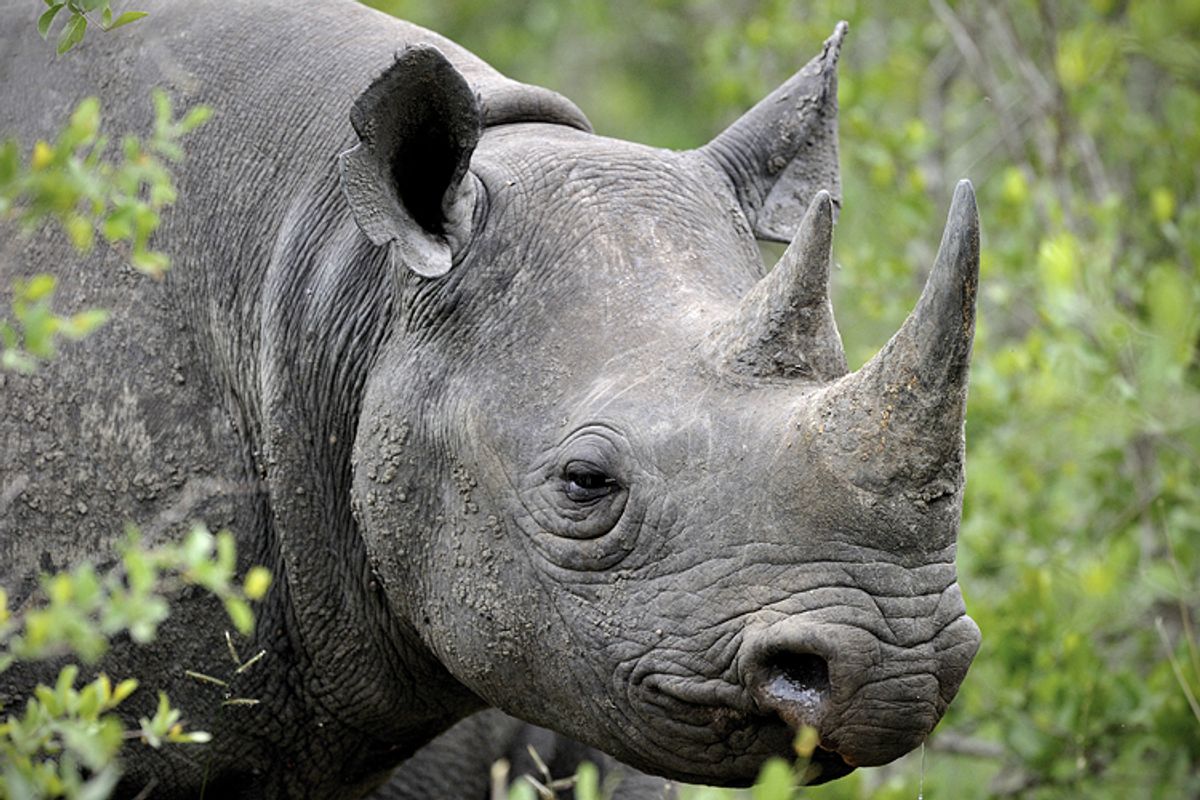 Corey Knowlton says, "I want to experience a black rhino. I want to be intimately involved with a black rhino." This, unfortunately, is not the beginning of the worst OKCupid profile ever, but a Texas man's explanation for why he recently paid $350,000 to the Dallas Safari Club for a permit to hunt an endangered black rhino in Namibia.

Knowlton, whose Facebook page is festooned with photos of him smiling beside large animals, is a hunter. A very experienced hunter. He works for The Hunting Consortium,  a "hunting and angling opportunities" company. Such companies abound for those rich enough to afford their services -- two years ago, a different hunting travel company helped Donald Trump's sons kill some weak "old & mature male animals" including a leopard. Knowlton's killed a wild boar, a bear, and last summer he bagged a record-breaking shark. Say what you will about the guy, but he's not just some rich clown with a gun. He claims that animal he's going over to Africa to hunt is an "an aggressive older male" who "is terrorizing the rest of the herd." He further says the money he spent is going toward The Conservation Trust Fund for Namibia's Black Rhino, and that the money from the auction will go to help protect other rhinos from poachers.

Wayne Pacelle, president and chief executive officer of The Humane Society of the United States, says, "The whole world is really fighting to protect the rhinos from the poachers and now you have some of these Dallas elite really wanting to kill a rhino just for a trophy." And the International Fund for Animal Welfare and the Animal Legal Defense Fund called the auction a "sad joke," and stating, "Although the group [Dallas Safari Club] claims its primary intent is conservation of the critically endangered black rhino, fundraising proceeds from the Convention consistently go towards hunting and political advocacy of hunting interests." But speaking to a CBS news affiliate this week, Knowlton said his critics "don’t know what I’m about. They don’t even understand the process. This actually is the very best thing by scientific biologists experts."

Knowlton's critics are not confined to animal organizations with reasonable concerns. The FBI confirmed last week that it is investigating "multiple threats" against the Dallas Safari Club in light of the auction. The club’s executive director, Ben Carter, says, “I’ve had death threats on my family,” Carter said. “We’ve had a number of death threats to our members and [threats about] what would happen if we sell the permit." It should go without saying, but here it is: threatening to kill people is a really stupid way of identifying yourself as a humanitarian, trolls.

As someone who eats meat, I'm not appalled by the idea of killing animals; it would hypocritical to be so. I have friends in rural areas who go out on weekends and hunt, and while I don't really see myself with a gun rack any time soon (or a car, come to think of it), I respect that people hunt for food, or to alleviate issues of population control in environments that I have no personal experience of. But if you want to help an endangered species population, paying well over a quarter of a million dollars to go try to kill a member of it seems like a strange way of going about it. And Knowlton's near erotic admission that this is for him about being "intimate" with a black rhino makes the whole enterprise sound alarmingly like an animal version of "Hostel."

But the backlash – or perhaps the threats – seem to have made even Knowlton consider the worthiness of his goal. On his Facebook page recently, he wrote, "Thank you all for your comments about conservation and the current situation regarding the Black Rhino. I am considering all sides and concerns involved in this unique situation…. I deeply care about all of the inhabitants of this planet and I am looking forward to more educated discussion regarding the ongoing conservation effort for the Black Rhino." Maybe he could start by trying an "intimate" experience that he doesn’t have to buy and kill his way into.