Sundance, Oscar and why the movies aren't dead

The Oscar nominees are sensational and Sundance is better than ever. What happened to the "post-cinematic" age? 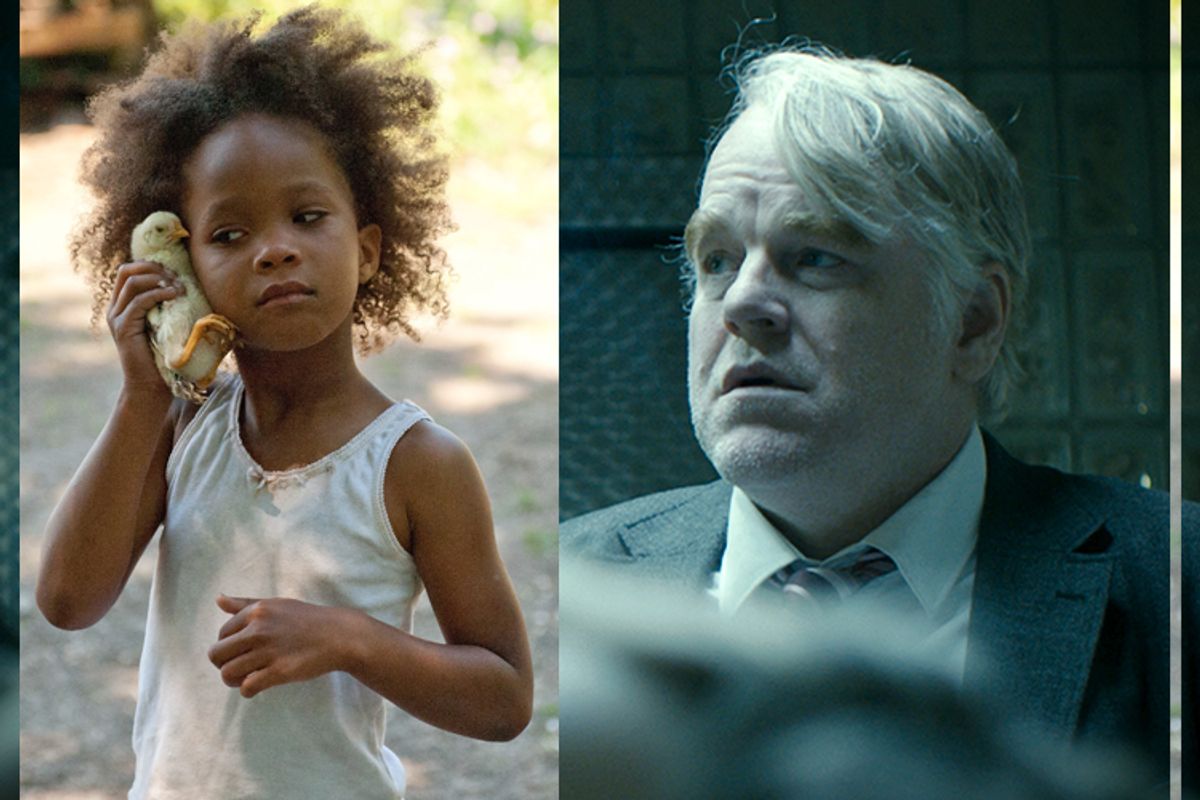 Quvenzhané Wallis in "Beasts of the Southern Wild," Philip Seymour Hoffman in "A Most Wanted Man"
--

Anybody who tries to tell you that the theatrical moviegoing experience is dead — and I seem to have those conversations on a weekly basis — needs to figure out what they’re talking about, first of all. Perhaps they should try that line on the producers of “Iron Man 3” and “Fast Furious 6,” which have earned more than 2 billion American dollars from paying customers in movie theaters around the world.

Do the doomsayers mean that moviegoing isn’t what it used to be, as a central ritual of culture, and that all too often (as with going to see the movies mentioned above) it involves the charm, ambiance and quality control of dining at Burger King? Inarguably true. But the old model of buying a ticket and sitting in the dark among strangers has proven remarkably robust, even in what’s been called a “post-cinematic” age. Of course many people will end up seeing this year’s three leading Oscar contenders — “American Hustle,” “Gravity” and “12 Years a Slave” — on TVs and computer monitors and mobile devices. But all three of those invigorating and remarkably different movies are fundamentally big-screen adventures, belonging to a tradition that stretches from D.W. Griffith to Hitchcock to Kubrick to Scorsese, and they will most reward those who actually leave the house to go see them.

When it comes to lower-budget independent film, the specialty of the Sundance Film Festival — which kicked off on Thursday in the Utah mountains, with founder Robert Redford fending off questions about his Oscar snub — the “death of cinema” pronouncements have a more complicated resonance. This year’s opening-night premieres included Damien Chazelle’s feature “Whiplash,” with Miles Teller of “The Spectacular Now” as a tormented young jazz drummer, and the documentary “Dinosaur 13,” about the complicated turf battles that followed the historic discovery of an intact T-rex skeleton in South Dakota. Those may be absolutely terrific films (I haven’t seen either yet), but they’re exactly the kind of movie that will play briefly in a few dozen to a few hundred theaters (at best) and that people are likeliest to catch on VOD or iTunes or Netflix.

But does that mean that Sundance, and the entire indie-film ecology it represents, has become irrelevant, a second-rate stepcousin to all the hot cable dramas people actually watch and care about? Not at all. Without question, Sundance has retrenched since its years of maximum cultural hotness (from the mid-‘90s through the mid-‘00s), when the place was packed wall-to-snowbank with random celebrities — I once ran into Tom Brady, Paris Hilton and David Bowie during the course of a single afternoon — and product-launch parties. Redford and his festival director, John Cooper, have shifted the focus back to actual movies — and the actual movies have gotten a hell of a lot better.

Redford has genuinely never thought of Sundance as a launching pad for movies that would make a ton of money, but I think both he and former head honcho Geoff Gilmore got a bit distracted by the glitz and glamour of the festival’s trendiest years. Now Sundance has returned to being an artistic incubator for young or unorthodox or innovative talent of the sort that defies ordinary storytelling conventions and isn’t likely to get a three-season dramatic miniseries deal with HBO or Showtime. Try to imagine pitching a cable network or a mainstream Hollywood producer on the premise behind “Beasts of the Southern Wild.” (“Well, so the main character is this little girl who speaks only in voice-over. Her dad is played by a guy we met in a bakery, and her mom works in a floating brothel. I think. And then there are these giant boars, or tusked hamsters, or something. I’m not really sure what they are, or if they’re real.”)

You could say pretty much the same about “Upstream Color” or “Fruitvale Station” or “Ain’t Them Bodies Saints,” to mention just three of the premieres in last year’s memorable Sundance lineup. That 2013 festival, likely one of the best ever, also included “Before Midnight,” “Concussion,” “Don Jon,” “In a World …,” “Kill Your Darlings,” “Mother of George” and “The Way, Way Back,” along with three of this year’s five Oscar-nominated documentaries (“Cutie and the Boxer,” “Dirty Wars” and “20 Feet From Stardom”) and at least two others that should have been (“After Tiller” and “Blackfish”). That’s the kind of cultural mojo I can get behind, post-cinematic age or not.

Sometimes those movies will connect with mainstream audiences and academy voters and so forth — although no one in their right mind would have predicted such a fate for Benh Zeitlin’s “Beasts,” the big hit of Sundance 2012. But more often they won’t, or won’t quite. Some of those directors will be making the Hollywood thrillers and Showtime dramas of the future, following after Steve McQueen and David O. Russell and Vince Gilligan and David Chase. Others will remain on the cultural margins, on purpose or by happenstance, pushing at the boundaries of artistic possibility and reminding us that the three-act structure, the boy-and-girl-kept-apart and the pseudo-unexpected character kill-off at the end of Season 3 are not the only means of seduction.

Are the movies dead? Well, they long ago lost their high-minded claim on cultural primacy and supremacy, and it was about time too. A lot of movies are terrible-looking junk made for bad reasons, definitely not worth spending 13 bucks on so that some kid can spill a Mountain Dew on your loafers and the couple next to you can text their dinner plans during the sex scene. I’ve heard it all before. But there were always terrible movies in abundance; more good ones are made around the world today than ever before, and American independent cinema is in the middle of a barely noticed boomlet. If that’s the death of movies. I’ll take it.

As far as this year’s Sundance lineup goes, well, guessing about unseen movies in advance is a fool’s game. Which certainly won’t stop me from doing it. Salon’s Prachi Gupta is already on the scene in Park City, Utah, and I’m joining her this weekend. Here are a baker’s dozen of the movies I’m most excited about. Based on past results, I’d predict that a few of these will be on the money, several will be calamitous, what-was-I-thinking duds and at least one or two movies that I haven’t even noticed are about to become huge sensations.

“Camp X-Ray” Kristen Stewart once had a promising career as an indie actress, back in the days of "Adventureland," and then lightning struck in the form of a strange little vampire film no one expected to be all that. Can the highest-paid actress in the history of cinema pull off a straightforward role in an earnest drama about a young military guard at Guantánamo Bay who forms an unlikely bond with a Muslim detainee? I’m a longtime K-Stew booster and I’m betting she can, but we’ll soon see.

“A Most Wanted Man” Anton Corbijn, the music-video pioneer who turned filmmaker with “Control” and “The American,” takes on John le Carré’s terror-war thriller set in gloomy Hamburg. This might be the biggest and hottest title on display among the Sundance premieres, with a first-rate cast that includes Philip Seymour Hoffman (it’s a big year for him), Rachel McAdams, Robin Wright and “Rush” star Daniel Brühl.

“Happy Valley” First-rate documentarian Amir Bar-Lev (“The Tillman Story”) takes on the hair-raising story of Jerry Sandusky and the Penn State sexual abuse scandal, with access to several key sources who haven’t spoken on camera. Part of me doesn’t want to know more about Sandusky and the ever-tainted Nittany Lions, but I also don’t think I can stay away.

“God’s Pocket” John Slattery of “Mad Men” makes his debut as a writer-director with this blue-collar dark comedy starring Philip Seymour Hoffman as a beleaguered contractor trying to cover up the truth about his stepson’s “accidental” demise. Also in the cast: Richard Jenkins, John Turturro and Slattery’s TV love interest Christina Hendricks.

"They Came Together” Even with the inane double-entendre of the title, it took me a while to realize that this rom-com starring Paul Rudd and Amy Poehler (which is already a genius combo) is actually a spoof directed at all the overwrought and oft-imitated “You’ve Got Mail From Seattle” conventions of the genre. David Wain of “Wet Hot American Summer” and “The State” directs, and there are apparently loads of star cameos. But will it be comedy genius or self-indulgent snark?

“Life After Beth” Yeah, I’m sick to death of zombie movies too. (See what I did there?) But the nearly affectless and often hilarious Aubrey Plaza returns to life as Dane DeHaan’s undead girlfriend in this comedy from writer-director Jeff Baena, and that casting is so perfect I pretty much can’t stand it.

“No No: A Dockumentary” Did Dock Ellis of the Pittsburgh Pirates really pitch a no-hitter while tripping on LSD? Evidently he did, but this documentary from Jeffrey Radice goes beyond that episode to explore Ellis’ role as a black-power pioneer of baseball’s revolutionary ‘70s.

“The Internet’s Own Boy: The Story of Aaron Swartz” One of the year’s most anticipated docs explores the life and tragic death of the pioneering programmer and information activist, who committed suicide at age 26 when faced with federal indictments that could have put him in prison for 35 years.

”20,000 Days on Earth” Post-punk legend Nick Cave – perhaps the last unsullied hero of rock’s rebellious ‘80s -- collaborated with artists/filmmakers Iain Forsyth and Jane Pollard on this docu-fiction portrait of his life and career. The music movie of this year’s festival, for sure.

“The Voices” In a combo that sounds both fascinating and potentially disastrous, Iranian-born director Marjane Satrapi (“Persepolis”) enlists Ryan Reynolds for her first live-action feature, a tale of a love-starved factory worker torn between his evil talking cat and well-meaning talking dog. Gemma Arterton, Anna Kendrick and Jacki Weaver are the women in his life (who may or may not discourse with the animals).

“I Origins” More moody, speculative sci-fi from writer-director Mike Cahill and actress Brit Marling, the team behind “Another Earth.” A love story between a molecular biologist and a model meets an explosive discovery about evolutionary science that turns out to have “existential implications.” Michael Pitt and Astrid Bergès-Frisbey also star.

“Love Is Strange” Ira Sachs, director of the tremendous “Keep the Lights On,” returns to the NYC gay love story, this time focusing on the travails of a different generation. John Lithgow and Alfred Molina play a loving couple who decide to tie the knot after almost 40 years, costing one of them his job (as a teacher in a Catholic school) and driving them out of their Manhattan apartment.

“Concerning Violence” Not even I believe that there’s a big audience eager for a new archival-footage film from Göran Hugo Olsson of “The Black Power Mixtape,” this one about the African revolutionary struggle of the ‘60s and ‘70s, with narration by Lauryn Hill and texts drawn from radical theorist Frantz Fanon. But damn does that sound fascinating — and, like Olsson’s earlier film, a challenge to political orthodoxy in every possible direction.