The radical MLK we need today

As the nation rediscovers poverty, it’s time to replace the safe, airbrushed icon with the revolutionary he was 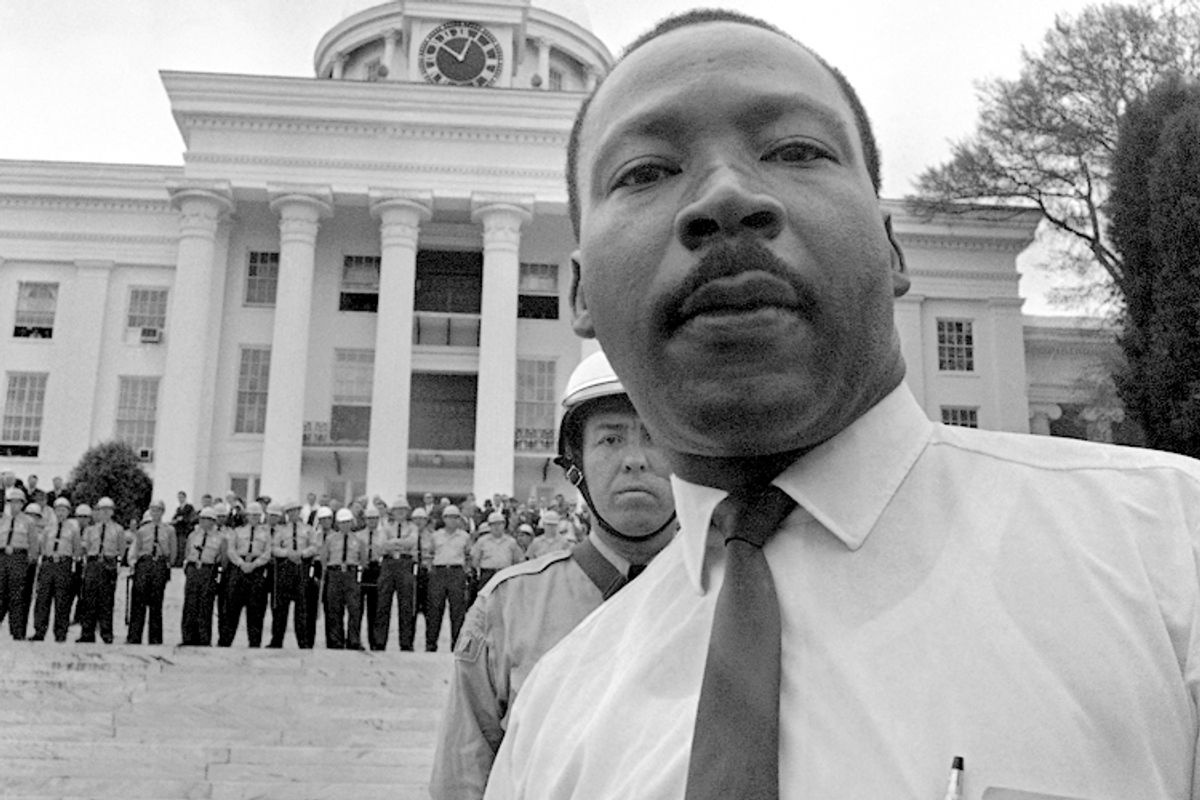 When Nelson Mandela died last month, I envied South Africans who had worked alongside him for freedom: Americans haven’t gotten to see many of our icons of justice get that old. My immediate thought was of Dr. Martin Luther King Jr., assassinated at 39, though Bobby and John Kennedy, Malcolm X and Medgar Evers, quickly followed.

But the inescapable image was King. Even if the freedom struggle of the 1960s didn’t end up letting King grow old like Mandela, let alone lead his country as president, it was hard not to compare the two, especially since Mandela so often declared his debt to his younger American ally.

King and Mandela had much in common, but one thing stands out this week: As they were lionized globally, both were deradicalized, pasteurized and homogenized, made safe for mass consumption. Each was in favor of a radical redistribution of global wealth. Each crusaded against poverty and inequality and war. Both did it with an equanimity and ebullience and capacity to forgive and love their enemies that made it easy to canonize them in a secular way. White people love being given the benefit of the doubt and/or being forgiven. I speak from experience.

But now, as the country turns again to issues of income inequality and poverty, and economic populism is said to be having a “moment,” maybe it’s time to remember Dr. King, the radical. The one who died trying to ignite a Poor People’s Movement that he saw as the natural outcome of the civil rights movement. The one who tried to branch out to fight poverty and war, but at least in his lifetime – and so far in ours – didn't succeed.

I loved pretty much everything about the celebration of the 50th anniversary of the March on Washington last year, except how the right got it so wrong. It seemed to be the beginning of a movement to reclaim the real MLK, especially among liberals. King was of course celebrated hugely, but so were lefty heroes who never get enough credit, like Bayard Rustin and A. Philip Randolph. There were stories about “The Socialists Behind the March on Washington,” as well as about the media’s and the Kennedy administration’s wrongheaded fears of violence.

Coming off of that gorgeous 50th anniversary celebration, though, where we remembered the triumph of King the strategist and organizer, let’s remember the King who tried and, by common measures, failed. Wasn't feted, wasn’t lionized.  King was always a radical, but at the end of his life, he was something of an outcast, criticized by liberals, the left and the right.

Forget about the right, for now: King crossed some Democrats and labor leaders when he turned against the Vietnam War in 1967, after his unparalleled Riverside Church speech. He knew the war was not only wrong, but was making Johnson's alleged "War on Poverty" fiscally impossible. Meanwhile a growing black power movement mocked King's commitment to nonviolence and integration. Even some close allies in the civil rights movement blanched when he joined Marion Wright Edelman and other organizers to start a Poor People’s Campaign later that year – a movement of black, white, Latino, American Indian and Asian people mired in poverty, to fight the war and get the help they deserved. They were to march on Washington and set up a camp there in April 1968, the month King was assassinated.

Harry Belafonte tells a story in his amazing memoir, “My Song,” about King being challenged by his SCLC deputies on his accelerating radicalism generally, and the Poor People’s Campaign specifically, just a week before he died. Describing King as a “socialist and revolutionary thinker,” Belafonte says he clashed with close ally and future Atlanta mayor and U.N. ambassador Andrew Young, over not only the Poor People’s Campaign, but King’s thoroughgoing critique of capitalism. Belafonte quotes King telling the group, gathered at the singer/actor/activist’s New York apartment: “What deeply troubles me now is that for all the steps we’ve taken toward integration, I’ve come to believe that we are integrating into a burning house.”

When Belafonte asks what that means they should do, an exhausted King tells him:   “I guess we’re just going to have to become firemen.”

Assassinated a week later, King wouldn’t get to lead the Poor People’s Campaign. But almost 50 years later, most of us who think the way he did are still firemen in a burning house, constantly fighting the fires set by radical Republicans to make life worse for the people King cared most about, never getting around to building the sturdy, welcoming, capacious, fire-resistant dwelling that lives in our political imagination. King would be proud of our accomplishments, and also a little bit sad for us. Or maybe I'm just projecting.

Some of King’s closest living allies have been trying hard to right the reverend's record. “There have been and continue to be efforts to ‘neuter’ or ‘de-radicalize’ the Dr. King who delivered his 'I Have a Dream' speech in August, 1963,” says his longtime lawyer and speechwriter Clarence B. Jones. Though the dream speech, which Jones helped write, was itself radical, he sees King’s April 1967 “Beyond Vietnam: Time to Break the Silence” speech at Riverside Church as “the ideological turning point for King.”

Harry Belafonte likewise thinks much of American political culture “is guilty of dealing with Dr. King’s life and story in grievously superficial ways. What gave us all strength to do what we did was his radical thinking.” Acknowledging that King’s turn against the war and toward cross-racial, anti-poverty organizing was “controversial” among his closest colleagues, Belafonte notes: “It was controversial, but controversy wasn’t something he shunned; controversy became the system through which disagreement and debate could be heard. He was comfortable with that. He welcomed it. That aspect of his history is never really discussed.

"The vested interests don’t want us speaking of Dr. King in radical terms," Belafonte continues. "The great tragedy and irony of it all is that the public hungers for voices that are driven more by these moral concerns.”

I’ve never waded into the debates over whether King was a “socialist,” though Belafonte and another close ally Julian Bond say he was (to the chagrin of Glenn Beck, who of course tried to hijack the March on Washington anniversary a few years back).  Socialism has been such a stigmatized and divisive and practically irrelevant notion in my lifetime (even though I worked for a socialist newspaper!) that I've never needed to claim King for its roster. But whatever we call King's point of view, stripping him of his very obvious economic radicalism distorts not only his history but all of ours.

And as a younger generation shows more curiosity about political solutions that aren’t on the agenda, it may limit King’s appeal, too. A 2011 Pew poll found 49 percent of Americans 18 to 29 say they have a positive view of socialism vs. 43 percent with a negative view. Capitalism is underwater among that age group, with 46 percent positive and 47 percent negative. And here's one of King's most famous, resonant quotes about capitalism, from his August 1967 speech: "Where Do We Go From Here?" (I like this version, because it's punctuated by his SCLC audience's replies):

What I'm saying to you this morning is communism forgets that life is individual. (Yes) Capitalism forgets that life is social. (Yes, Go ahead) And the kingdom of brotherhood is found neither in the thesis of communism nor the antithesis of capitalism, but in a higher synthesis. (Speak) [applause] It is found in a higher synthesis (Come on) that combines the truths of both. (Yes) Now, when I say questioning the whole society, it means ultimately coming to see that the problem of racism, the problem of economic exploitation, and the problem of war are all tied together. (All right) These are the triple evils that are interrelated.

Labels don’t matter, but solutions do. Rather than remembering King solely as a civil rights leader, we must reclaim him as a radical advocate of economic justice, looking to lead a multiracial movement of poor people to complete the unfinished business of the civil rights movement. As King put it plainly, “What good does it do to be able to eat at a lunch counter if you can’t buy a hamburger?”  Post-integration, too many black people couldn’t sit down at integrated lunch counters and buy a hamburger; 50 years later, too many people of every race have the same problem.

We are ready for the radical King now. President Obama, perhaps belatedly, has declared income inequality "the defining issue of our time." Even poverty seems back on the agenda. The man who may be doing the most to advance these issues right now isn't a politician or a rabble rouser; it's Pope Francis, who's been hailed by everyone from Obama to Paul Ryan (Ryan gets him wrong) as helping us make the issue of poverty central to our politics. "If Dr. King were alive today, he would be in Rome visiting Pope Francis holding a joint press conference to summoning the world to aid the poor eradicate poverty," Clarence Jones says. The president promises he's going to the Vatican to meet the new pope, and that's a start.

For now, though, all these years later, King's allies and inheritors are still fighting fires in a burning house. It's time to rebuild the house with room for everyone, and keep it safer from the fiery danger of injustice.