Blackface in my fourth grade play: How a white girl with a racist dad played MLK

When my favorite teacher asked for volunteers to play Dr. King, what happened next sticks with me to this day 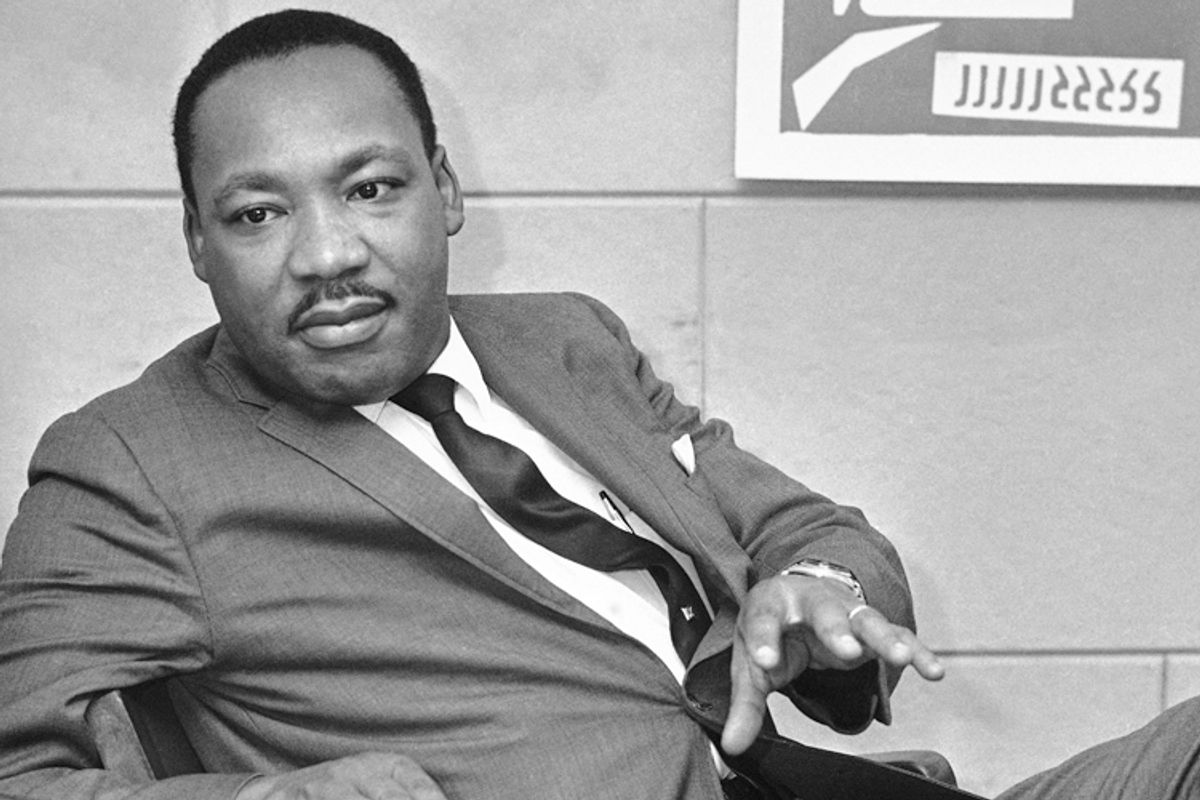 I became a teacher because of my favorite teacher. One of only three black academic instructors I ever encountered prior to college, Beatrice Gaulden was a passionate, flamboyant and challenging fourth grade teacher, who faithfully drank eight tall glasses of water a day, and once showed up to our class in neon green Hammer pants. It infuriated me that she often wrote in a conduct grade on our report cards, because though I was an A student academically, my penchant for keeping up constant chatter with anyone who sat near me always netted me a B- or lower for conduct.

Despite her hipness, Mrs. Gaulden was fundamentally old school. She kinda reminds me of that line from the Common Sense joint:  She was old school, when I was just a shorty, never knew throughout my life, she would be there for me.

I know it’s a tribute to first loves, but Bea Gaulden made me fall in love with learning. She was the first teacher who I felt was for me, and the lessons she taught have been there as a constant reminder of who I am and can be. She wasn’t my first good teacher. Even my “bad” teachers – ones not particularly welcoming of black students-- were great instructors. But she recognized what it meant to be a stalwart advocate for a precocious black girl in a sea of white children.

She first recognized that I was a natural skeptic, prone to question all the information that she shared from her perch on a grey metal stool in the front of the room. Rather than seeing those questions as a challenge to her authority, she pulled me to the side one day and said, “Do you question your white teachers like this?” I thought about it and realized that even at 8 years, I mostly accepted what all my white teachers had to say without question. When I answered her honestly, “No,” she said simply, “Never stop questioning.” To this day, I am relentless about asking questions, and as a student leaving her class, I never again accepted easy answers or attempts by instructors to dismiss or silence me.

She is the first teacher who nurtured my passions. So when I showed up one day reading a juvenile biography of Martin Luther King that my aunt had purchased for me, Mrs. Gaulden asked to see what I was reading. They had suggested in the back of the book that turning it into a play might be a good supplemental learning activity, and I asked if we could.

She enthusiastically said yes, and then shepherded my class through the process of putting on a play, which we performed for the third-, fourth- and fifth-graders during Black History Month.  I starred as Rosa Parks, in our reenactment of the Montgomery Bus Boycott.

On the day it came time to choose the classmate who would play Martin Luther King, Mrs. Gaulden asked for volunteers. Two students raised their hands, a white girl (let's call her Cindy) and a black boy named Bruce. Cindy raised her hand first, and in fairness, Mrs. Gaulden dutifully wrote her name on the board beside the role of MLK.

I wondered to myself how a white girl was going to play Martin Luther King, and I think she proposed simply to paint her face with brown makeup. Mrs. Gaulden agreed, and the play went off without a hitch, while Cindy, painted in brown, delivered MLK’s “I Have a Dream” speech.

Years later, I remembered something startling about Cindy. When it came time for her birthday party that year, she went around to each desk inviting the few friends in our circle to her sleepover party. When she arrived at my desk, she shook her head and said, “I’m sorry I can’t invite you to my birthday party, Brittney, but my daddy doesn’t like black people.”

Her mom came to see her performance as MLK.

I’m not sure why no one protested Cindy’s MLK performance. Perhaps the adults concluded that since it was MLK whom she so fervently wanted to play, surely her painted-on brown face wasn’t racist.

I am very clear about the offense that blackface constitutes. This story is no apologia for it. But I wonder what made this little white girl with a racist dad beg for the opportunity to play our greatest anti-racist hero. I wonder what her mom, married as she was to a racist man, thought about her daughter playing this role. I may never know that. But I know that mother and daughter showed up as willing actor and audience in our anti-racism tale.

I am also thankful for the public school educators who had the courage to let us learn about injustice in such a creative and fun way. Recently I heard a troubling story about a University of Pennsylvania professor who was disinvited by a New Jersey high school from giving a talk on Martin Luther King. The principal and teacher who had initially extended the invite, both black, were afraid that he would talk too much about the radical dimensions of King’s thought, about the anti-capitalist, antiwar King.

The choice of those educators not to allow high school students to engage critically with the legacy of one of our greatest thinkers represents a failure of courage and a failure to educate. My teacher believed nearly 25 years ago that a group of fourth graders were capable of thinking about and working through questions of injustice. Surely we can trust the teenagers of today to do the same.

We live in a world that is no place for dreams. Far too many teens are already disillusioned with the failing schools, unattainable college, underpaying jobs, threat of violence, inauthentic public discourse, and constant war that shape their lives. The realness of post-Dream King would be a breath of fresh air to many of them.

For King did dream, but he also stayed woke. Our challenge is to do the same.