Wendy Davis is not Chris Christie

The right pounces on discrepancies in her bio, but they're still not Bridgegate 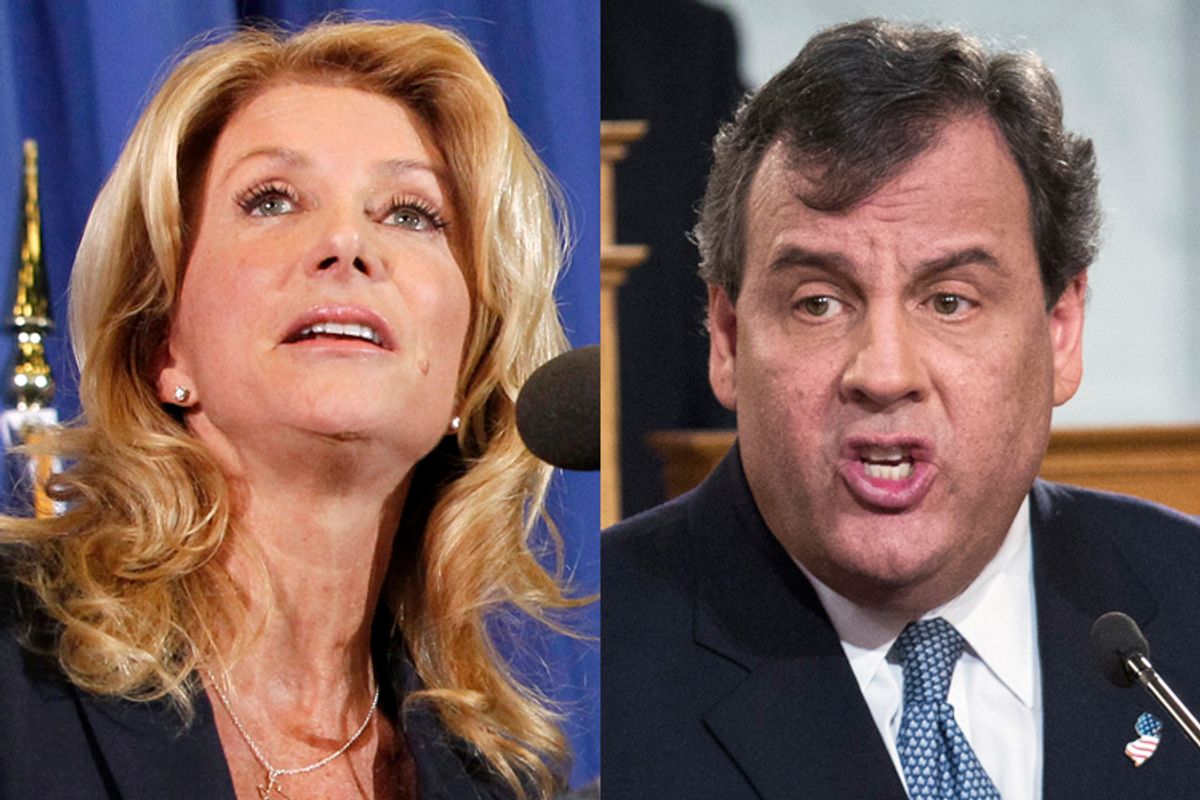 In case it isn't obvious that a Texas Democratic woman is not a New Jersey Republican man, let's make something clear: She isn't. This isn't just about the more obvious distinctions between the two. It's about the inevitable yet ridiculous rush to equate the news that Davis misrepresented certain aspects of her personal history with the recent revelations of Christie's George Washington Bridge fiasco.

Davis' narrative has long been one of a triumph over circumstances – the story of a woman who was by age 19, as the AP tightly sums it up, "married and divorced with a child of her own and living in a mobile home." But over the weekend, the Dallas Morning News revealed that there were "key facts blurred" in Davis' personal narrative. "Davis was 21, not 19, when she was divorced," the paper said. Furthermore, "She lived only a few months in the family mobile home while separated from her husband before moving into an apartment with her daughter." It also revealed some differing accounts of the circumstances of her second marriage and divorce. As you can see, they really blew the lid off Wendy Davis and her WEB OF LIES.

Speaking to Wayne Slater for the story, the Texas gubernatorial candidate admitted that "My language should be tighter. I’m learning about using broader, looser language. I need to be more focused on the detail." But that wasn't enough for critics of the woman who last summer earned the dubious nickname "abortion Barbie" for her filibuster for reproductive rights. Aside from the usual random tweeters wondering why they were seeing "plenty still on Christie but not a word on Wendy Davis lying about her bio," Erick Erickson gleefully said that "I await Wendy Davis's lawsuit against the Dallas Morning News claiming it harmed her mental health by revealing her lies," while Ben Shapiro wrote his own bio for her, declaring, "Wendy Davis apparently abandoned her children, had her husband foot her bills, and divorced after adultery accusations. #FeministHero." Drudge, meanwhile, excitedly reported that "TX Abortion Heroine Lied About Being a Single Teen Mom..." And John Nolte went for the gold by connecting the dots: "Interesting: As MSM destroys Christie, New Media is taking down Wendy Davis over fake bio -- story MSM is ignoring. Whole new world." He went even further on Breitbart,  saying, "It is not as though the media would have to quit their ongoing political assassination of Chris Christie to give the brewing scandal surrounding Texas Democrat Wendy Davis's bio falsehoods the attention it deserves."

I don't know how or why the 50-year-old Davis got the three-decade-old events of her personal timeline wrong. Frankly I think a woman never forgets exactly when her first marriage died, but maybe I'm wrong. But I do know that if a woman getting some details in her history wrong is not getting massive attention, it might be because it's not all that important. Christie's situation is vastly different because, as Blake Zeff wrote last week, "In this plot, those harmed were the actual citizens of Chris Christie’s state." Or as my colleague Joan Walsh noted earlier Tuesday, "The Wendy Davis story is NOT 'analogous' to the Chris Christie story. She's not accused of abuse of power." To even suggest so, to pounce on a biographical inconsistency like it's a political vendetta, is simply idiotic.

It comes down to this: Did a politician do anything that hurt his or her constituents? Did this person waste taxpayer time or money? Did this person reveal something like, say, a basic misunderstanding of biology, that would call his or her leadership into question? No? Then don't make it more than it is. And Wendy Davis is no Chris Christie.