White stars escape the judgment Richard Sherman received -- even if, like Justin Bieber, they get arrested 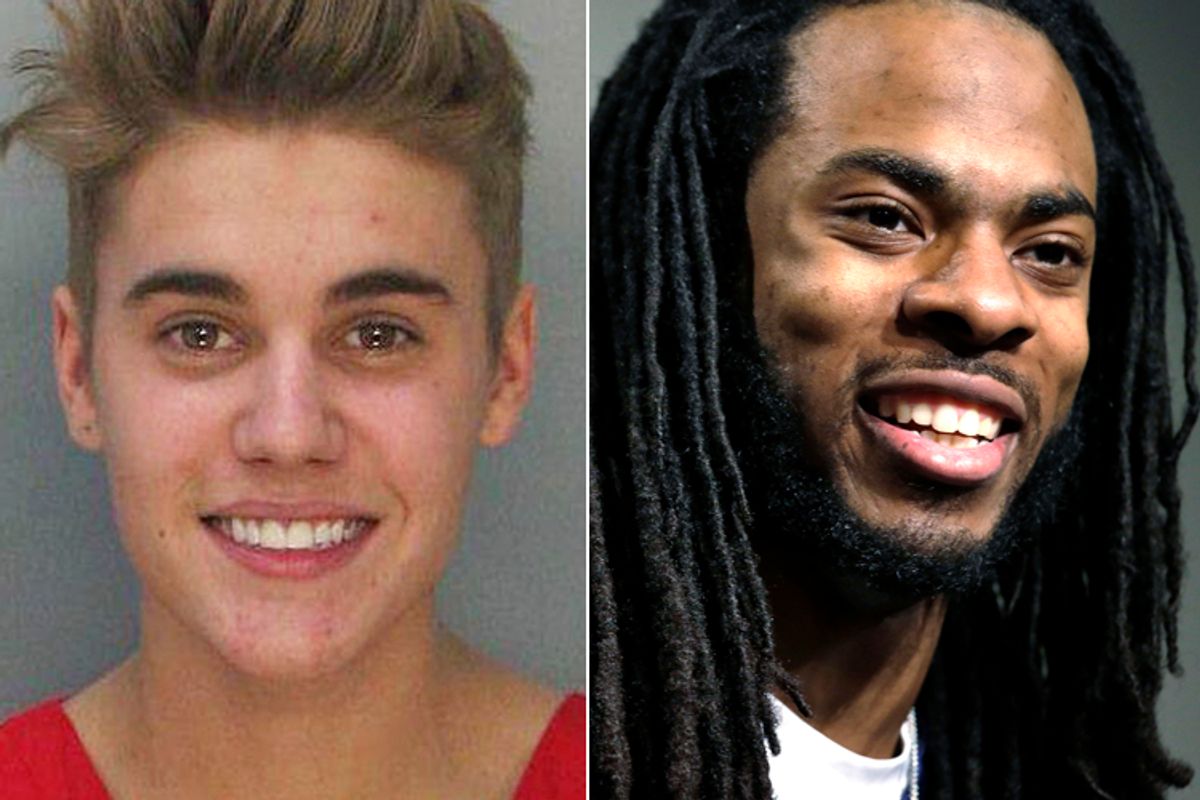 Following the NFC Championship game last weekend, Richard Sherman gave an interview to Erin Andrews.  He yelled to millions watching in their living rooms about being the best and shutting down opposing receiver Michael Crabtree.  However, following his interview, he somehow morphed from a football player who had just reached the pinnacle of sports achievement into a racial stereotype.

Suddenly he was “classless,” a “thug” from Compton, and any manner of other negative terms that one can substitute for the N-word.  Sherman was no longer human, but a racist caricature.

Black people exist in a “damned if we do, damned if we don’t” space within American conversation.  If a black person does something that's seen as negative, that negative behavior is used as yet another example of how “we” are.  Negative behavior, so it goes, is just inherent in “us.”

On the flip side, if a black person achieves something positive, the positive achievement is often dismissed as either undeserved or the result of an innate gift the achiever can't take credit for.  Many people believe President Obama only got into Harvard because of affirmative action, and just as many believe he was only elected into office (twice, no less) because he is black.  In sports, the success of white athletes is most often attributed to “smarts” and “hard work,” but the success of black athletes is often attributed to “natural ability” or “God-given” talent.

In 1999, when Brandi Chastain whipped off her shirt to celebrate the U.S. Women’s World Cup win, photos of her celebration landed her on the covers of Newsweek, Sports Illustrated and Time magazine.  She described her spontaneous action as "momentary insanity … the greatest moment of my career, and I lost control." However, when the black men of the 2000 Olympics gold medal 4x100 team removed their shirts in celebration, they were called a "disgrace." And Serena Williams was harshly criticized for doing a popular L.A. dance when she won her Olympic gold medal (and, as Gawker's Cord Jefferson notes, called a "thug" when she argued with an ump).

When Ryan Lochte represents the U.S. on the international stage wearing grillz, it's a fashion statement -- all anyone wonders is "can he pull it off?"  However, Trayvon Martin is called a “thug” for wearing the exact same thing (google "Trayvon Martin grillz thug" and the same for Ryan Lochte).

And Richard Sherman, the high school salutatorian who graduated from Stanford with a 3.9 GPA, has now been reduced to an uneducated unsportsmanlike “thug” in the American lexicon for giving a passionate interview that some people didn’t like. Black hockey player Ray Emery was subjected to similar dismissiveness.  When he was involved with a fight with fellow goalie Braden Holtby, he was widely called a “thug,” a moniker never attributed to any of the dozens of white players who fight at nearly every hockey game.  And white players who break the hearts of opposing team's fans with game-winning plays never get the kind of vitriol that was directed at Joel Ward for scoring the winning goal in a playoff game.

Beyond the sports arena, this has real impact in the real world.  One example I like to point out is the MySpace post of a 17-year-old boy in 2008:

This boy had run-ins with the law when he was 16 and got his girlfriend pregnant by 17.  Yet, just three weeks after posting this on his MySpace page, he walked out onto the national stage, was applauded at the Republican convention, and was held out to be an "All-American" role model (his name was Levi Johnston, by the way).  He was on the cover of People and even got his own show.  Bristol Palin was never referred to as Levi's "baby mama" ... though Michelle Obama was disrespectfully referred to as such (by members of the media) during the 2008 presidential election.

But if a black teen had written a similar post, he likely would have been deemed a "thug."  If he had also had run-ins with the law, touted his affection for guns, and gotten his "baby mama" pregnant, many would have viewed him as a typical black boy with a "propensity to violence," as George Zimmerman's brother characterized Trayvon Martin on "Piers Morgan."  Such a young black man would have likely been held up as an example of the breakdown of society.  But Levi, who later posed for Playgirl, was largely excused for his "youthful indiscretions."  And if a young black man, who happened to be the son of a single mother, assaulted a photographer and was arrested for drag racing and drunk driving, he would probably be painted in a much more negative light than Justin Bieber has been.

Simply recognizing that black people are viewed and treated differently from whites in America is not "playing the race card" (which is insulting to suggest, by the way).  It's simply recognizing that, though we've made strides in this country, we still have work to do when it comes to breaking down barriers in people's hearts and minds. When white fathers don’t cringe when their daughters bring home black men, when a young black kid wearing grillz is called fashionable before he’s called a “thug” and when Richard Sherman can yell about being the greatest, just as Ric Flair yelled for 30 years, then maybe we can begin thinking about that elusive “post-racial” society.  But, for now, I hope Richard Sherman is able to back up those words in a few weeks … with a Super Bowl ring in hand.