"Young Ones": In the bone-dry future with Michael Shannon 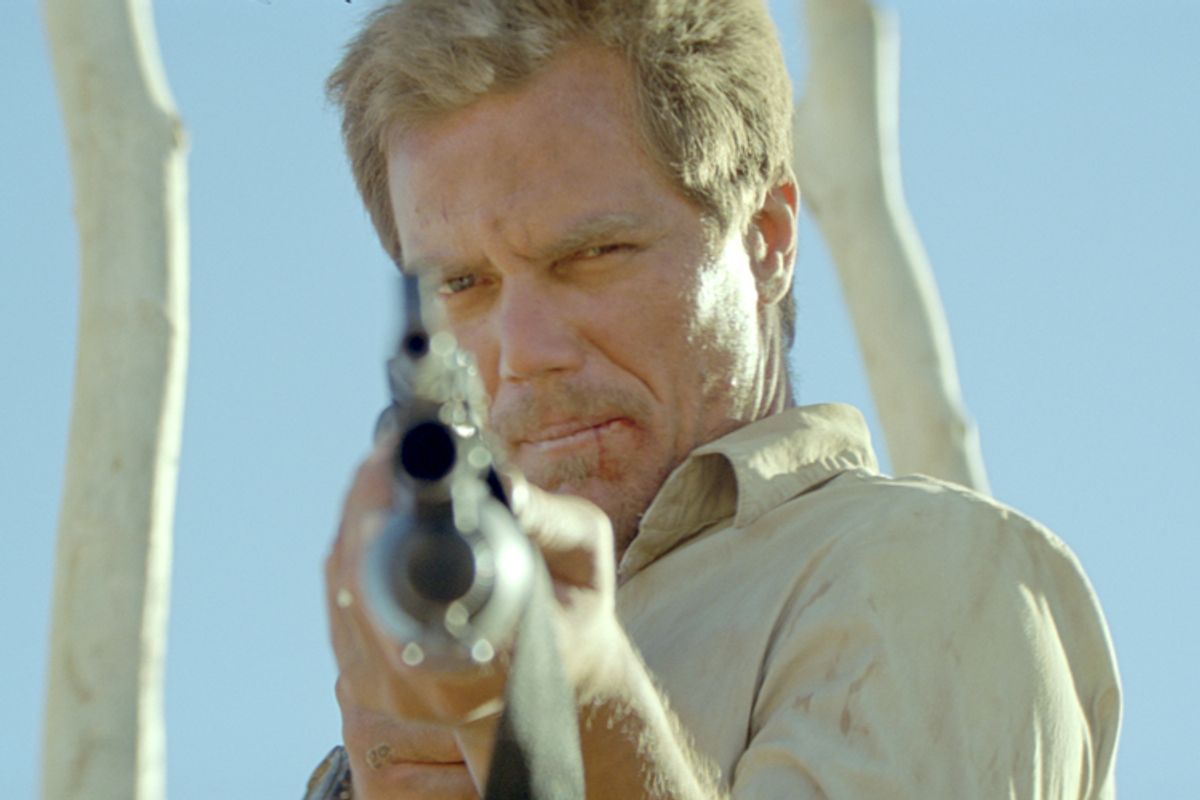 Michael Shannon in "Young Ones"
--

PARK CITY, Utah — Sometimes you come to film festivals to see movies that have “buzz,” that noxious and ineffable quality that is mentioned somewhere by Samuel Johnson (I’m not kidding about that), noteworthy accomplishments that will win awards and spark cultural debate and so on. But sometimes you want to come to places like Sundance specifically for other kinds of movies, the oddball discoveries that are inexplicable and perhaps indefensible, the flawed, ambitious and audience-alienating works that aren’t quite like anything you’ve seen before (and that you may never get a chance to see again). That brings us to Jake Paltrow’s “Young Ones,” a goofy, apocalyptic western with a ‘70s drive-in vibe that’s set several decades in the future, which I caught here on Wednesday night after being extensively arm-twisted by a publicist who knows my tastes. I’m glad I went, mostly.

“Young Ones” might wind up as a cult movie, or at least a movie film geeks will discover on cable a year from now and send each other excited WTF-riddled texts about. We’re somewhere in the American West (we think), after all the water has gone and civilization and the state have abandoned this barren and denuded land. Those things still exist somewhere else, across an unspecified border, where shopping malls, cellphones and running water are still part of normal life, or at least what passes for normal in the high-tech, crisis-ridden world of the mid-21st century. (There’s very little exposition; I’m guessing about some of that.) Over here in bone-dry land a few people are hanging on, including Michael Shannon as a laconic rancher called Ernest Holm, whose well has just dried up but who still hopes the rain will come back someday and reawaken the dead land.

This role is extreme underacting by Shannon’s standards, but I’ll watch him in anything; maybe when you’re in a film that’s part “Mad Max,” part Cormac McCarthy’s “The Road” and part John Ford western, there’s no point chewing up the dust-coated scenery. Ernest has a gangly, awkward beanpole of a son named Jerome (Kodi Smit-McPhee, who’s now 17), and “Young Ones” will eventually become his story. There’s a certain degree of baffling postmodern affect to this film: It’s divided into three acts by on-screen titles, and after it’s over the actors appear in front of a theatrical curtain during the closing credits. Paltrow’s basic narrative approach — yes, his big sister is a pretty well-known actress — is to keep on cramming in familiar bits of story, whether they fit or not, on the apparent premise that there’s no such thing as too much melodrama.

So Jerome has a cute sister (Elle Fanning), who’s also horny and dumb as a box of rocks, and she has a motorcycle-riding bad-boy suitor (Nicholas Hoult), who has a chip on his shoulder because his dad was once, long ago, the biggest landowner in the now-desiccated valley. This handsome but ruthless dreamer is called Flem, and the movie’s middle chapter is his story. A baby gets sold by degenerates (to worse degenerates), there’s a nefarious scheme to push a pipeline through the valley to water distant corporate farms, and there's an adorable robot-droid who looks something like an all-terrain shopping cart and plays a key supporting role. Ernest has a weakness for the bottle and deals bootleg liquor to the greasy, violent guys who are building the pipeline; this doesn't turn out awesomely. His drinking once caused an accident that landed his wife (Aimee Mullins) in an isolated, robot-powered rehab center where she can temporarily regain the power to walk. That might be this movie’s niftiest and creepiest glimpse of the future.

Paltrow’s dialogue has an arch and overly literary quality that I assume to be calculated (it goes with the act titles and the closing curtain), although that doesn’t make it a good idea. But the photography by Giles Nuttgens is striking and the desolate landscape (it’s actually in South Africa!) has a memorable, monumental emptiness. The rains finally return and the movie’s third act resolves into a familiar saga about a boy who comes of age and seeks vengeance for his pa. Even grading on a curve for originality, “Young Ones” only halfway works. But it’s a genuinely idiosyncratic vision of near-future doom that’s never boring, with characters and images that will stick in my mind longer than many better, soberer films.