Voices on both sides of the aisle now argue that mobility, not inequality, should be our priority. That's a mistake 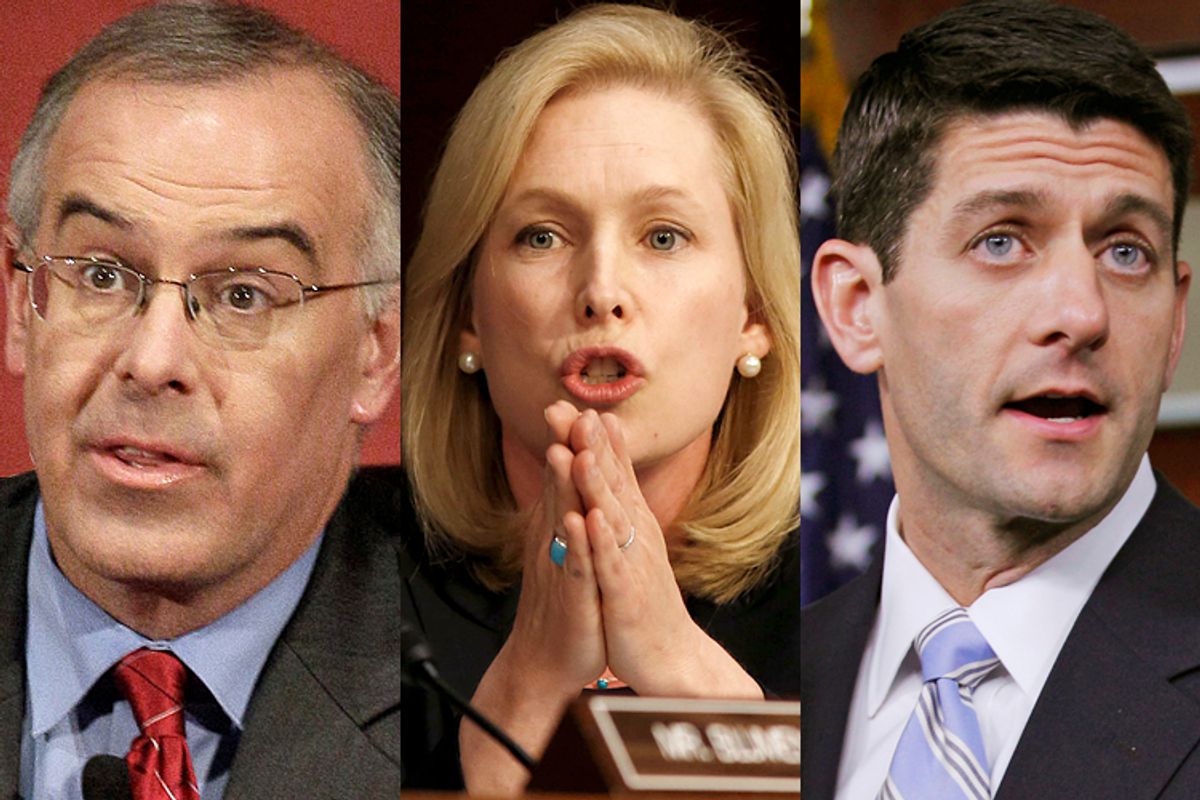 A new “bipartisan consensus” is brewing: 2014 will be the year in which Very Serious People argue that America's primary economic goal should be increasing social mobility, not decreasing inequality. “Shame on Obama and De Blasio for talking about class, and trying to divide us,” they’ll smarm. “Let’s focus on something everyone can agree on: upward mobility.”

It’s already happening. At the Brookings Institution, Richard Reeves argues that while inequality is important, the defining issue of our era is “the shocking, illiberal, immoral transmission of poverty and affluence from one generation to the next.” Social mobility is the new deficit reduction, and luminaries from the left (Kirsten Gillibrand) and right (Paul Ryan) can both agree it’s a problem. Even David Brooks is concerned. Marco Rubio has already sketched out the battle lines: “It is this lack of mobility, not just income inequality, that we should be focused on.” At the core, the question about whether our society should focus on inequality or mobility gets to a significant schism built around one central question: Is inequality fundamentally immoral?

Economics, by textbook definition, is the study of how to distribute scarce goods in a world of unlimited desires. When we use markets to distribute goods in an unequal society, two important failures appear. First, there are people who are denied the right to have a say in the distribution of those goods, and second, some goods that are not marketable are distributed poorly.

If we imagine markets as a type of democracy in which we “vote” through our dollars about how to distribute goods, we can immediately see the problem. Those without income, or with only a little of it, cannot make their “votes” heard in the marketplace. In a 2004 comedy bit, Louis C.K. exposes an absurd example of this dilemma by proposing that with Bill Gates’ wealth, the Microsoft founder could “buy all the baseball teams and make all the players wear dresses.” Other, less benign examples of the disconnect between capital distribution and need present themselves in everyday life. For example, Jeffrey Sachs recently wondered on Twitter why the world can’t come up with $5 billion each year to fight AIDS, TB and malaria. He could just as easily have wondered why 90 percent of the world’s health research budget is spent on combating conditions that account for 10 percent of disease (i.e., diseases that affect wealthy Westerners).

In a society that accepts high mobility without equality, one accepts that whoever reaches the highest income bracket (as decided by the ephemeral concept of a “market”) should have an outsize influence in determining the distribution of resources. Thus, we have both Prada shoes and extreme poverty. Hermès and homelessness. We have Elon Musk working on private space flight and a hyper loop while starving children die for want of medicine protected by intellectual-property law. And that's even before we consider how millionaires and billionaires have used their wealth in an attempt to distort democracy: Sheldon Adelson and his wife spent more money on the 2012 election than the combined contributions of citizens from 12 states.

In "The Spirit Level," Richard Wilkinson and Kate Pickett show how inequality negatively affects societies. They find that many of the negative phenomena that are generally attributed to culture -- high levels of teenage pregnancy, obesity and criminality, for example -- are not the causes of inequality, but rather the effects of it. I have made the case elsewhere that there are empirical reasons to believe that this is the case. But to take a simple example, research shows that it is poverty and inequality that make the working class more likely to bear children out of wedlock, which in turn further stifles upward mobility.

Inequality is inherently degrading. Adam Smith writes: “A linen shirt, for example, is, strictly speaking, not a necessary of life ... But in the present times, through the greater part of Europe, a creditable day-labourer would be ashamed to appear in public without a linen shirt, the want of which would be supposed to denote that disgraceful degree of poverty.” Likewise, Wilkinson and Pickett find that, “There are now numerous studies that show the same thing … low social status has a clear impact on physical health.” That is: Simply having a low-wage, low-social status job can lead to depression, anxiety and obesity. The problem is not only poverty, it's also inequality.

While Very Serious People worry about mobility, the problem remains: Even if we achieve it, “the poor will always be with you,” as one Jesus Christ said. There will always be those who cannot develop the skills or talents to make their efforts marketable. Because of this, some people will never be able to enjoy the new opportunities provided by upward mobility or the new jobs provided by growth.

To accept that upward mobility alone can cure society ill's, to accept meritocracy as the ultimate goal, is to accept markets as the means of determining merit. When we talk about “upward mobility” and “meritocracy,” we implicitly assume that those who succeed have “merit,” while other do not. However, it was Friedrich Hayek, a free-market champion, who noted that capitalism should not be considered a “meritocracy,” because markets don’t distribute based on merit, but rather demand. Jamie Dimon and Lloyd Blankfein, markets have decided, deserve more than Hannah Gay, Katherine Luzuriaga and Deborah Persaud -- the scientists who cured a newborn of HIV this year. Thus, when we accept upward mobility as a goal we must also be willing to accept that markets determine who goes up and who falls down, rightly or not. And when we accept “growth” as a goal, we assume that GDP is a useful metric to determine social progress (which it is not).

This illusion of  “meritocracy” poisons the way we talk about inequality, and how to fix it. In discussing “redistribution,” my colleague Matt Bruenig points to Murphy and Nagel’s work on “everyday libertarianism,” or what Marx might call “false consciousness”: People who live in capitalist societies make assumptions like the idea that a market distribution is inherently legitimate, and therefore that a government involved in economic matters is “re-distributing” resources. In the same way, we talk about “upward mobility” in terms of “merit,” assuming that markets determine rewards justly, according to some abstract notion of what "merit" means. The first right in a capitalist society appears to be “thou art entitled to the market's distribution.”

Markets are here to stay, but we can at least help ensure somewhat equitable access to them. Equality is freeing because it liberates people from the demands of markets, gives them more autonomy to determine their own destiny. As Oscar Wilde warned, “In a community like ours, where property confers immense distinction, social position, honour, respect, titles, and other pleasant things of the kind, man, being naturally ambitious, makes it his aim to accumulate this property, and goes on wearily and tediously accumulating it long after he has got far more than he wants, or can use, or enjoy, or perhaps even know of.” More equality means more freedom.

In his book "Left and Right: The Significance of a Political Distinction," Norberto Bobbio argues that equality is the defining distinction between left and right. The left, he argues, believes that inequality is fundamentally immoral, while the right believes it natural and beneficial to society. The right should actually desire high levels of inequality, attended with high levels of mobility. That is: Upward mobility as an imperative is a right-wing idea.

In truth, while the right does indeed pay rhetorical lip service to the idea of mobility, its policies do little to actually encourage it. However, that fact alone does not mean the left must. Rather, the left must maintain that humans deserve equal rights to equal treatments, which demands more parity of market share.

Social mobility is a sort of Rorschach blot, upon which the left and right can project their proposals: universal daycare, pre-K, charter schools, free college, etc. But these policies do little to correct the structures that prevent mobility, primarily parental investment, opportunity hoarding and control of the political system. We can hardly be expected to drag the rich down, and we therefore struggle with minor steps to pull the poor up. Certainly the possibility of moving out of poverty is good, but too many people will still be left behind. Social mobility aids a subsection of the poor that can take advantage of opportunities. But what of the minimum wage worker, who at 35 has only a high-school education? She will struggle to take advantage of pre-K education or free college. An agenda aimed squarely at inequality -- and poverty specifically -- will better serve the poor and middle class.

The easiest method to eliminate poverty and alleviate inequality, and one that will have little effect on mobility, would be a large universal basic income. The UBI would have other positive results; it could end poverty, would certainly increase upward mobility and would increase stagnant middle-class wages. This is another key advantage of reducing inequality -- it touches many salient issues and passes the Frank Luntz test: Americans are really worried about it (one suspects that its populist nature is what makes Very Serious People so slow to adopt it; they prefer to speak harsh, unpopular truths).

Throughout this argument, the ultimate dynamic has been clear: If one believes that humans should be treated with equal dignity and that market power will be used for harm, inequality must be opposed. If one believes that inequality among humans is natural and beneficial, and that the true fear is democracy, the great equalizer, equality must be opposed. This is not a caricature of the libertarian position. It was H.L. Mencken who worried that democracy was a peculiar system in which the weak ruled the powerful. But it is rather Rousseau who is correct: “the destruction of equality was attended by the most terrible disorders. Usurpations by the rich, robbery by the poor, and the unbridled passions of both, suppressed the cries of natural compassion and the still feeble voice of justice, and filled men with avarice, ambition and vice.”