Behind the Penn State scandal: A community fails to reckon with its past 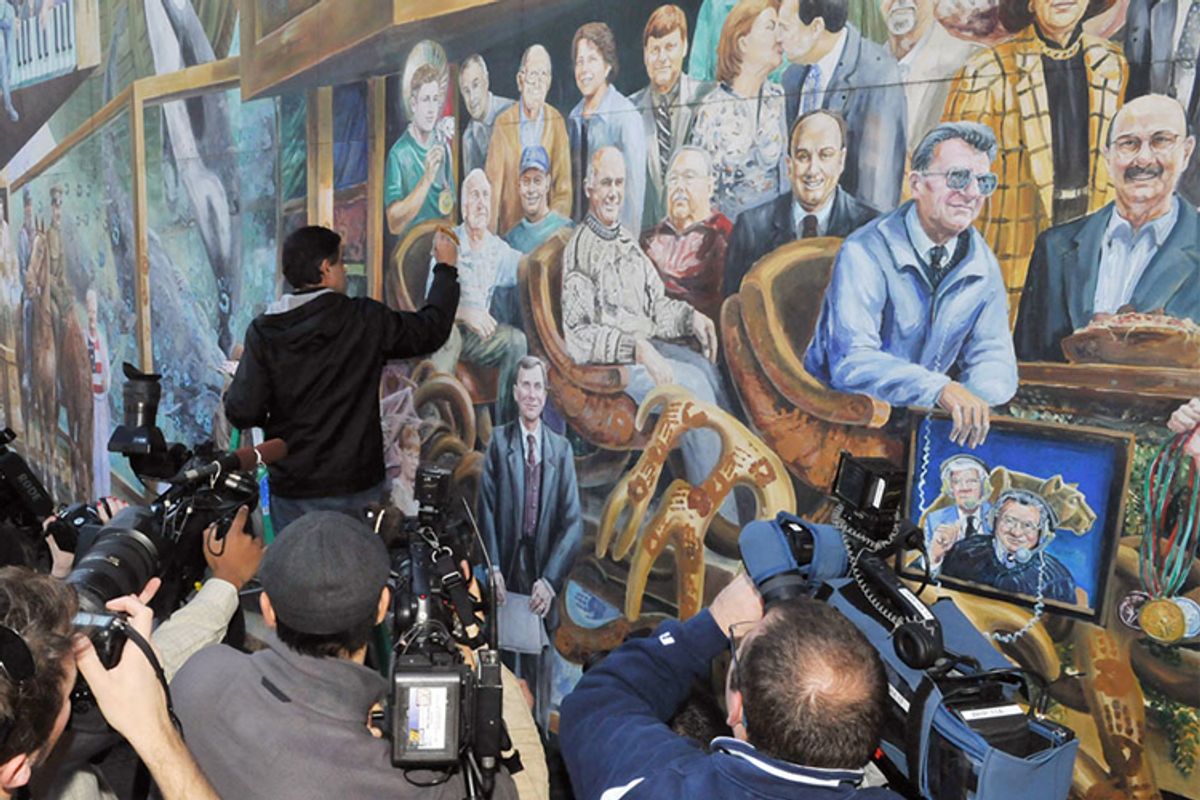 PARK CITY, Utah — Whatever lessons we were supposed to learn from the Penn State sexual abuse scandal, we didn’t learn them; whatever questions we were supposed to ask went unanswered. Now, I’m aware that the phrase “Penn State sexual abuse scandal” will rile up many current and former residents of the Keystone State. Just for using that expression in a pre-Sundance blurb, I’ve gotten emails from readers arguing that it’s just the “Jerry Sandusky scandal,” that Penn State bears no institutional guilt for what happened, and that the legendary Nittany Lions football program should not be viewed as tainted.

In a way, those people are right, but not for the reasons they think: The real story is not smaller than Penn State, but larger. They are illustrating the points raised by Amir Bar-Lev’s subtle and provocative documentary “Happy Valley,” which premiered at the Sundance Film Festival this week. Bar-Lev, who also made “The Tillman Story” and “My Kid Could Paint That,” avoids leading you to any firm conclusion about who or what is to blame for what went wrong in bucolic central Pennsylvania, and viewers with different perspectives will understand it in different ways. This ambiguity is captured in a single person, Jerry Sandusky’s adopted son, Matt, who tells Bar-Lev that when investigators first showed up after his dad’s arrest, he told them that nothing like that had happened to him and that he couldn’t imagine the senior Sandusky doing such things. It wasn’t true, and although Matt Sandusky never testified against his father, his later revelations that he had endured long-term childhood sexual abuse were the final blow in the court of public opinion.

Matt Sandusky says that he felt that his loyalty and responsibility lay with the family no matter what, and Bar-Lev’s film suggests that many people in Happy Valley — the football-crazed region surrounding Penn State’s hometown of State College — felt the same way. Penn State loyalists claim that the university and its community are not to blame for the long-term criminal conduct of a beloved celebrity employee, the subject of glowing TV reports showing him frolicking in a swimming pool with the boys helped by his charity organization. (Even at a press-only Sundance screening, there were audible gasps at that archival footage.) The rest of us may scoff at that, but society did something similar, on a grander scale. After Sandusky was convicted on 45 counts of child abuse, Penn State was treated as a national pariah, hit with a $60 million fine and forced to forfeit 13 years of football victories, based on the premise that it had put athletic accomplishment above ethical conduct. As if that were somehow unique among American universities! Here’s the parallel: People in Happy Valley tried to blame Penn State’s problem on Jerry Sandusky, and people in America tried to blame college football’s problems on Penn State.

By compressing the story into less than two hours, Bar-Lev reminds us that Penn State’s collective attempt at self-reckoning was tormented, melodramatic and bizarre. The abrupt firing of longtime football coach Joe Paterno sparked violent street riots, with students chanting his nickname (“We want JoePa!”), overturning a TV station's van, smashing windows and attacking reporters. A few months later, after it became clear that Paterno had known about at least some of the abuse allegations against Sandusky as early as 1998, he was deemed a nonperson in a Soviet-style purge. Paterno’s shrine-like statue outside Beaver Stadium, which had become the site for tense encounters between his defenders and detractors, was torn down and replaced with a nondescript grass berm. (In between, the heartbroken coach had died abruptly of cancer, adding a note of personal tragedy to the whole grotesque affair.)

None of this, needless to say, amounted to a real grappling with history, or with the underlying cultural forces that allowed a sexual predator like Jerry Sandusky to flourish for so long amid the most wholesome, all-American environment imaginable. I don’t find it particularly mysterious that Joe Paterno didn’t know how to deal with the troubling reports about Sandusky; Paterno came from a generation when such things weren’t talked about in public. Furthermore, while it’s clear that Paterno didn’t do as much as he should have to stop Sandusky (and he apparently said as much to biographer Joe Posnanski before his death), he remains a towering cultural figure of the 20th century, one who saw nearly all his players leave with diplomas and who tried to stand for the best tradition of college athletics. If there’s a disturbing contradiction between those things, it is best faced directly; Penn State’s trustees can no more erase Paterno from history than Stalin could erase Trotsky.

Anyone who says the same thing couldn’t have happened at Alabama or Miami or USC or Oklahoma or at least two dozen other football-mad schools — indeed, anyone who claims to know for sure that it hasn’t happened — is kidding themselves, big time. I’m not claiming there’s some obvious solution to the hive-mind, groupthink, blame-the-media mentality we see in “Happy Valley,” which seems like a constitutive element of human psychology that’s not limited to Penn State or college football or America. One local lawyer says in the film that Sandusky’s predilection for young boys was an open secret, while Joe Paterno’s wife and sons (who also appear in the film) take the position that everyone in State College was duped by an insidious pedophile genius. Both of those things cannot be true, logically speaking. What’s definitely true is that nobody in Happy Valley wanted to hear anything bad about the demigods who ran their beloved football program, until it became necessary to pull down their idols and cast them out of the temple.

Correction: An earlier version of this story incorrectly stated that Joe Paterno's name had been removed from the Penn State library. In fact, the late coach's name was not stripped from any academic entities at the university, including buildings, programs and scholarships, although the Paterno monument outside the football stadium was removed.