Macklemore's useless apology: Grammys and the myth of meritocracy 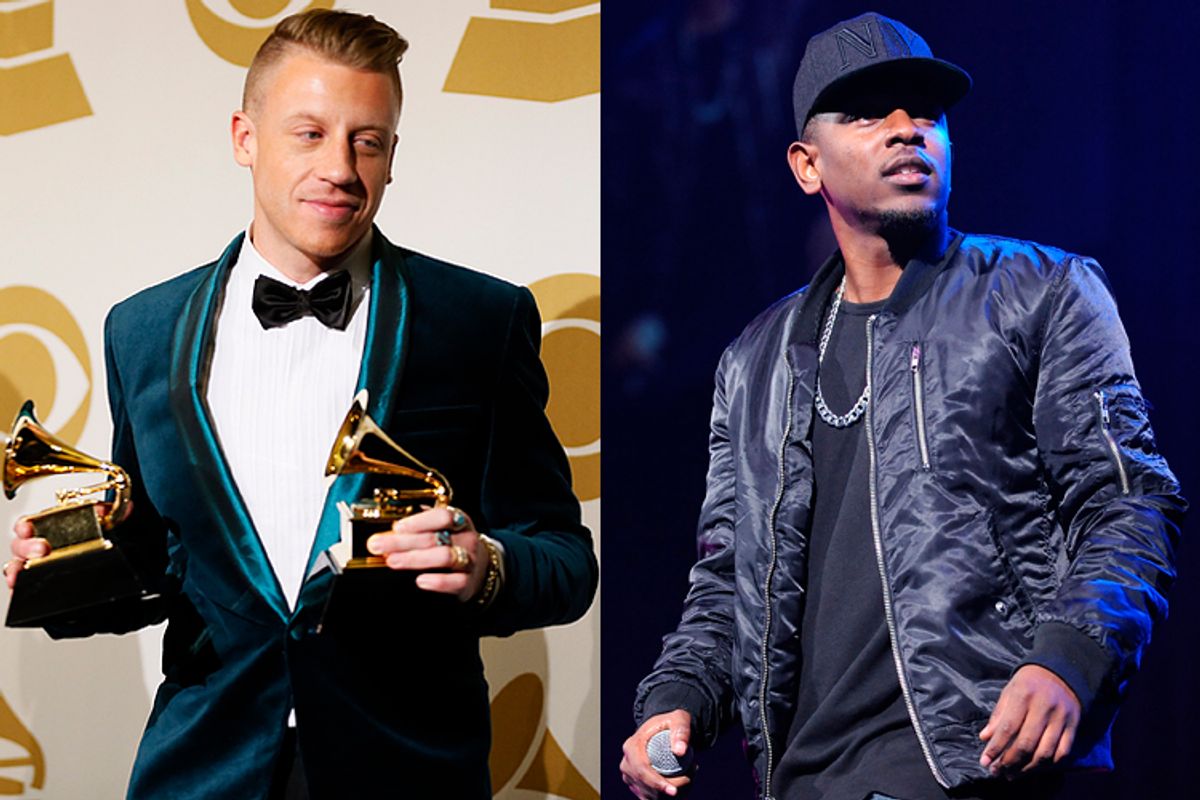 The Grammys have long been a source of disappointment because of the recording academy’s lackluster record of acknowledging the gifts and artistry of black musicians. The 2014 Grammys proved to be just more par for the course. The first award given during the live broadcast was to Macklemore and Ryan Lewis for best new artist followed by a performance of Lorde’s "Royals." Lorde went on to win song of the year for “Royals,” a critique of gratuitous consumption in hip-hop culture.

The most egregious error of the night was seeing the brilliant Kendrick Lamar get totally shut out. Everyone knows he’s the best new artist. Macklemore on his best day can barely hold a candle to Kendrick on his worse day. Even Macklemore acknowledged that he “robbed Kendrick,” via a text message that he then sent out screenshots of via social media. However, Macklemore claimed that fear prevented him from taking a courageous stance and saying exactly that when he went up to accept his award. But Kendrick Lamar can’t do anything with a private apology, Macklemore. Far too often, allies refuse to speak up in public while asking for absolution via private confessions. Macklemore failed to use the white privilege that he has readily acknowledged to challenge this structure of power in a moment when the world was watching.

Simultaneous to us witnessing this whitewashing and erasure of the black bodies and black artists who helped create the sound of folks like Macklemore, Justin Timberlake, Pink, Katy Perry and Robin Thicke, the Grammy’s force-fed us a lie of American progress in the form of a diverse marriage ceremony performed near the end of the show, featuring 30 couples, including straight, same-sex and mixed race pairings. As Queen Latifah, who many folks believe is queer, pronounced these folks married, we saw a spectacular display of American multiculturalism. A putatively queer black woman performed a marriage ceremony for the likes of America’s post-race, post-hetero progeny, as Macklemore, rap’s newest great white hope, serenaded the lovers with his hit song “Same Love.”

We know America is no more post-race than it is post-hetero, but each of these lies fuels the other. Macklemore is so popular in part because his music critiques gratuitous consumption and homophobia, both of which are figured to be problems endemic, not to American society, but to hip-hop culture in particular. Thus both he and Lorde scored big awards, he as best new artist, and her song of the year, because the view is that these white folks have come to a transnational consensus, that hip-hop culture is what ails us, and their critiques constitute a cure.

The problem is that their shit ain’t original. The progenitors and producers of hip-hop culture have had and have maintained a robust critique of the music and the culture since its earliest days.

But the myth of American progress cannot go forward without black folks occupying the space of the morally and politically retrograde. The cultural theorist and Duke University professor Sharon Patricia Holland argues in her book "The Erotic Life of Racism" that “those who order the world … make time” but “those animals and humans who are perceived as having no world-making effects merely occupy space.”  In other words, black folks merely take up space, but they are not ever able to move forward in time in the American cultural imaginary. Thus it is the movement of black cultural aesthetics onto the bodies of white folks – Justin Timberlake, Miley Cyrus, Katy Perry, Macklemore and Ryan Lewis, and Robin Thicke — that reads as American racial progress. When black folks cry about appropriation or point out the ways in which we are being written out of the history of shit we entirely made possible, we are accused of being “stuck in the past,” unable to move forward in time.

The second lie is like unto the first – namely that white folks have received these awards because of meritorious performance rather than racial privilege.

Meritocracy is a myth. And anyone who listened to Macklemore’s album over against Kendrick Lamar’s "Good Kid, Maad City" knows exactly what I mean.

A recent study found that the astronomical educational success of America’s immigrant groups can be attributed not to merit, but to a heady mix of intra-cultural investments in group superiority, fear of being seen as inferior, and an ability to think about the long game and then exercise “impulse control” to achieve it. The authors of the study take care to note, however, that while these attitudes are present in overachieving groups, they do not explain away the persistence of systemic forms of discrimination and its effects on African-American achievement.

“The same factors that cause poverty — discrimination, prejudice, shrinking opportunity — can sap from a group the cultural forces that propel success. Once that happens, poverty becomes more entrenched. In these circumstances, it takes much more grit, more drive and perhaps a more exceptional individual to break out.”

But the belief in “group superiority” is telling; it suggests that while there are a range of structural advantages that aid in the success of certain groups of people in America -- and this holds true across race and ethnicity — attitudes cause folks to mistakenly attribute these successes to their own merit and hard work.

But white privilege is real. It creates space for folks like Macklemore to do “conscious” and “positive” hip-hop and become superstars, while completely ignoring the work or killing the careers of black artists who wish to do the same.

Macklemore emerges then as just another white savior figure come to redeem the pathologized black masses. The fact that he doesn’t want the mantle means nothing. Lest we forget, real Jesus didn’t want the mantle either. Perhaps Lorde is Mary, the mother of Jesus, in this sick morality play.

In my humble estimation,  though, we have been Royally screwed. To riff on the work of the late great legal scholar Derrick Bell, the Lorde – no, not Audre -- is here “and we are not saved.”