Kerstin, one of 1.6 million now without jobless benefits, opens up about skipping meals and canceling Christmas 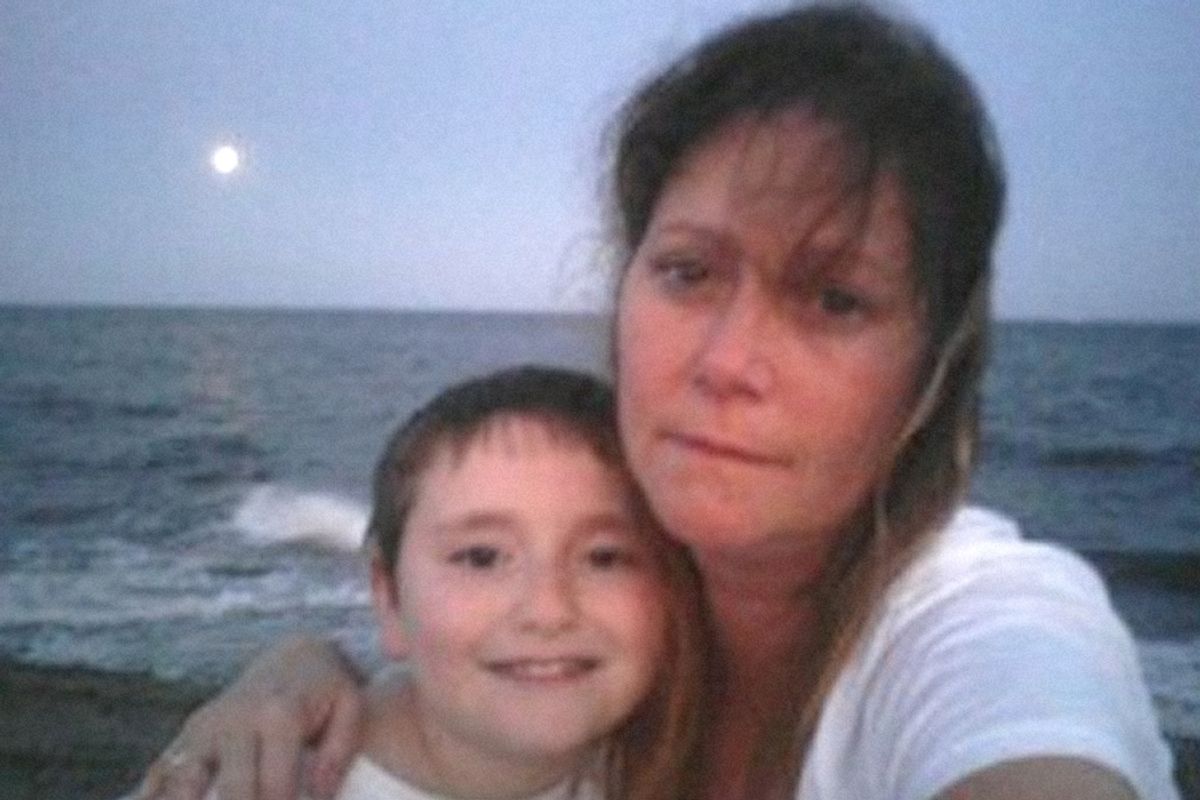 Kerstin Foster and her son Vincent
--

“I can skip meals all the time,” unemployed secretary Kerstin Foster told Salon two weeks after losing unemployment benefits. “I just have a problem with my son skipping meals. I’ve had to do that before, and it doesn’t bother me.” With a laugh, she added, “You can’t tell by looking at me, though.”

Foster said she’d been feeding her son “stuff like buttered noodles” in order “to fill his belly,” though “I’d prefer to give him a protein and a vegetable and some starch.” As for herself, she said she’d been eating “a lot of eggs, ‘cause they’re cheap.” Asked what she’d had to eat the day before, she mulled the question for a bit and then remembered eating a slice of pizza. She added, “I could go without eating – I’m a champ at that. If you drink a lot of water, then you don’t need to eat.” Asked if she frequently felt hungry, she answered, “I don’t think so, because I’m stressed out. So then I don’t think about it.”

Foster, a 46-year-old single mother of two living in Naugatuck, Conn., was one of about 1.3 million unemployed workers to lose their benefits on Dec. 28, after members of Congress went home without passing an extension. On Friday, House Democrats estimated that tally had passed 1.6 million. Foster has been unemployed since January of 2013, when an engineering construction project she was working on came to an end. “This is the first time my project ended and there wasn’t another one to go to, pretty much,” she told Salon.

Since then, Foster said, she’d put in “several” job applications each week, including for various office jobs, and passed eligibility exams for potential government work. “The waiting, and not hearing back, and if you do hear back, it’s ‘no thank you’ – it’s discouraging,” said Foster. Still, she said, “I’m a fighter,” and “I’m just not gonna give up. And I will prevail.”

“I’m just wondering what the Republicans are thinking,” said Foster. “Do you think, if they cut us off, then we’re gonna get a job tomorrow? Is that what they think?” She added, “If each one of us that’s out of work right now can’t pay our car payment, and we’re going to have to give our car back, what’s that going to do to the economy? ... I mean, like, we’re gonna lose everything.” Foster singled out December comments by Sen. Rand Paul, calling indefinite unemployment extensions “a disservice” to the unemployed, as “the most stupid thing I’ve ever heard in my life.”

Asked about congressional Democrats’ decision to join a December budget deal that didn’t include an extension, Foster said, “I think they did it so there wouldn’t be another government shutdown. But I’m not really that good at politics, so I don’t know why they did it. I really don’t know why they did that.” While an initial procedural vote to start debate on benefits extension netted 60 senators Jan. 7, Democrats’ effort to move forward a week later was blocked by near-unanimous Republican opposition.

The day after that 55-45 vote, Foster went to a local government office to seek food stamps. “They had to turn us away – there were so many people there,” she told Salon. “And they were all saying to me they were there for the same reason that I am. Because we all lost our unemployment.” She said she returned and successfully signed up for food stamps the following day.

“I consider myself to be a strong woman, and always worked, and always would not have wanted to take a handout,” said Foster, noting she’d worked since age 18 and considered herself “middle class.” “Even asking,” she said, “it’s embarrassing.”

Foster said she was also embarrassed to be relying heavily on loans from family and friends. “I’m gonna owe everybody money when I finally get back,” Foster told Salon, and, “I can’t even calculate that right now.” Along with cash, she noted some friends had dropped off meat and chicken thighs. She said she had no credit cards because she didn’t have good credit.

She expressed frustration at “people that haven’t walked a mile in our shoes” for “calling us ‘lazy,’ and, ‘Go ahead, there’s plenty of McDonald’s jobs …’” Asked if she’d looked for fast food work, Foster answered, “McDonald’s wouldn’t pay for my rent. I’d have to work three of them.”

Foster said she was “living on $400 a month in my child support” – less than her $320 car payment and $160 car insurance payment alone. If not for living in subsidized housing, whose rent dropped for the duration of her unemployment, she said, “I’ve would’ve been in deep – up a creek without a paddle.”

“My 13-year-old is handling it much better than I thought he would,” said Foster, especially when “we couldn’t really have a Christmas this year.” She said her son “took it with pride, and you know, he understood – which I don’t think a 13-year-old should’ve had to. But you know, he did do it. I got him a $50 Xbox card and told him he’ll see a better day as soon as I get back on my feet.” She added, “I was really upset, but I didn’t let him see that. I just told him I’ll make it up to him.”

Foster expects to return to work by late February, taking a job at an engineering firm she’s been in touch with for months. “The job I was supposed to start keeps getting put off, because we’re waiting for our field office to get up,” she told Salon. “It’s finally there – I took a picture of it the other day. I’m so excited.” Asked what would happen if there were another delay in that firm being ready for her to come to work, Foster answered, “Don’t say that. It’s not gonna get delayed again. What will happen if it gets delayed again? Oooh, that’s a good question. It’s not possible.” She laughed.