He didn't expect to succeed in the movies and didn't enjoy fame, but became one of the finest actors of our time 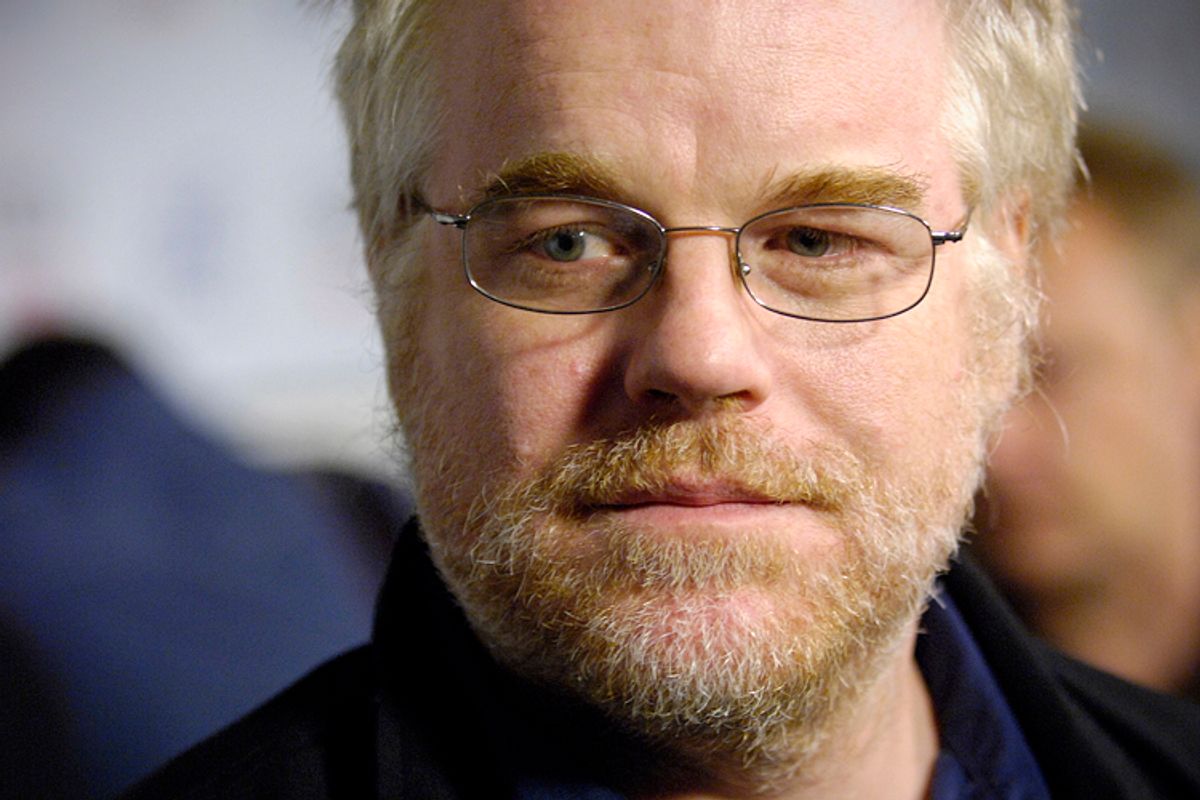 I saw Philip Seymour Hoffman less than two weeks ago at Sundance, genially taking audience questions from the stage after the premiere of Anton Corbijn’s film “A Most Wanted Man,” in which Hoffman plays a German counterintelligence agent in present-day Hamburg, trying to use a Chechen rebel to reel in a major financier of terrorism. The movie’s a mixed bag, but Hoffman is its heart, soul and intellect, giving a burdened, brooding, intensely physical performance as a Teutonic-bureaucrat version of Dirty Harry, a decent man who finally becomes aware he’s trapped by indecent circumstances. At the end of the film, Hoffman’s character leaves a car running in the middle of a Hamburg street and simply walks away.

Now Hoffman himself is gone, dead of an apparent drug overdose, leaving behind three children, heartbroken family and friends, and an acting career that had already achieved greatness but should have gone on a lot longer. I met Hoffman three or four times, but I only knew him in the sense that we all did, as one of the truest and finest craftspeople in the modern acting profession. He disappeared into every role and yet remained absolutely himself, an impossible, alchemical duality that only the best actors can manage. He understood when he needed to dominate a scene, or an entire film, as with the magnetic and deeply wounded title character of “Capote” (which won him his Oscar) or the charismatic, forceful and even erotic figure of Lancaster Dodd in “The Master,” crooning “Slow Boat to China” at Joaquin Phoenix (it’s ridiculous that that was considered a supporting role). He also understood that secondary characters are there to serve the story and its stars, not to hog the spotlight or audition for their own movies. Do you even remember Hoffman as irascible Oakland A’s manager Art Howe in “Moneyball,” baffled by Brad Pitt’s crazy ideas? Every second he’s on screen is exquisite, but he never tries to make the movie about him.

For Hoffman, acting on stage or on screen was an art or craft to be pursued on its own terms, not a means to an end. His New York Times obituary, which I was deeply grieved to read on Sunday afternoon, called him “ambitious,” and that was true in the sense that he worked immensely hard and took on all kinds of roles, always wanted to challenge himself and find out what he could do, and always sought to venture into unexplored corners within himself and the characters he played. It’s not accidental that so many of Hoffman’s screen characters are emotionally naked and desperate people, right on the knife edge that separates attractive from repulsive. In this country and this century we often understand ambition in terms of the marketplace, as a hunger for money or fame or power, and Hoffman had none of that kind.

I remember being in a conversational group around Hoffman after the premiere of Charlie Kaufman’s “Synecdoche, New York” at Cannes in 2008. (I don’t want to get sidetracked, but that movie is an underappreciated near-masterpiece, and features one of Hoffman’s greatest roles, as a dying theater director whose magnum opus is either an imitation of the universe or its replacement.) Hoffman was always reticent with the press, found it difficult to describe how he did his work, and obviously didn’t love doing interviews. Ingeniously enough, someone got him talking about the reasons for that. He had never imagined becoming a movie actor, he explained, and didn’t feel comfortable with the entire publicity machinery around the film business. “I always thought I’d be a New York theater actor, riding my bicycle to rehearsal,” he said. “That was all I ever wanted.” Maybe someone would recognize him once in a while at the grocery store, and tell him, “Oh! I loved you in that Chekhov play!”

Hoffman actually had a version of that career too, alongside his better-known career in the movies. He joined the nonprofit, off-Broadway LAByrinth Theater Company in 1995 — I assume that’s where he met his longtime partner, Mimi O’Donnell, who is one of the company’s directors — and directed or acted in numerous productions. (Here’s the Chekhov play: He was Konstantin in “The Seagull” in 2001.) His three Tony nominations as an actor suggest his deep commitment to the classic works of American theater: Sam Shepard’s “True West” in 2000, Eugene O’Neill’s “Long Day’s Journey Into Night” in 2003 and Arthur Miller’s “Death of a Salesman” in 2012. But he arrived in New York theater in the opposite direction from most actors, so to speak. The movies claimed him first, and whatever his mixed feelings about the film business may have been, the camera loved him.

As every article about him this week will mention, Hoffman gave up his job slicing meat and cheese in a Manhattan grocery-store deli after he was cast in a minor supporting role in the 1992 drama “Scent of a Woman,” which is remembered today only because it mysteriously won Al Pacino an Oscar. He appeared in three other films that year, three more in 1993 and four in 1994, including a memorable scene with Paul Newman, his acting idol, in “Nobody’s Fool.” (Newman punches him out.) He never had to slice bologna again, and after his needy, vulnerable and unforgettable performance as Scotty, the boom operator with ill-fitting clothes and a mad crush on Mark Wahlberg in Paul Thomas Anderson’s “Boogie Nights,” Hoffman became, after his own fashion, a movie star.

Although Hoffman didn’t put it this way in the conversation I recall, I suppose he hadn’t expected to become a successful movie actor because he wasn’t buff or slender, and didn’t fit conventional standards of handsome masculinity. But let’s not give filmmakers and casting directors too much credit for courage: For want of a better word, Phil Hoffman was incandescent. Once you’d seen him, even in a small role in a movie destined for oblivion, you never forgot him. In another era he might have been a classic Hollywood character actor, playing villains and sidekicks and cuckolded husbands by the dozen. Scratch that — he might just as well have been a star. If he didn’t have the bland, perfect good looks or impressive musculature required of today’s romantic leading men, you could say the same about Edward G. Robinson, Humphrey Bogart or Jack Nicholson. It’s too early to say these things, of course, but he may well be remembered as long as they are.

By my rough count, Hoffman has appeared in something like 34 films and 18 plays since the year 2000. We had no reason not to expect twice as many more in the 30 or 40 years ahead, and it’s almost impossible to reckon with the fact that his prodigious flow of work has suddenly stopped dead. (We will see him twice more as Plutarch Heavensbee, the game designer turned rebel of the “Hunger Games” series — and was his scene dancing with Jennifer Lawrence the highlight of that second movie or what?) What we know about his death is that it was a terrible private tragedy, and that’s enough. Maybe it was just a disastrous drug relapse and maybe other personal factors or career pressures were involved, but I don’t know and I don’t have a right to know. Philip Seymour Hoffman loved to act — the record speaks for itself — but he never wanted to be a public figure. He wanted to show up for rehearsal on his bike, and do the work.