The actress speaks out against Woody Allen, but neglects to mention her own brother 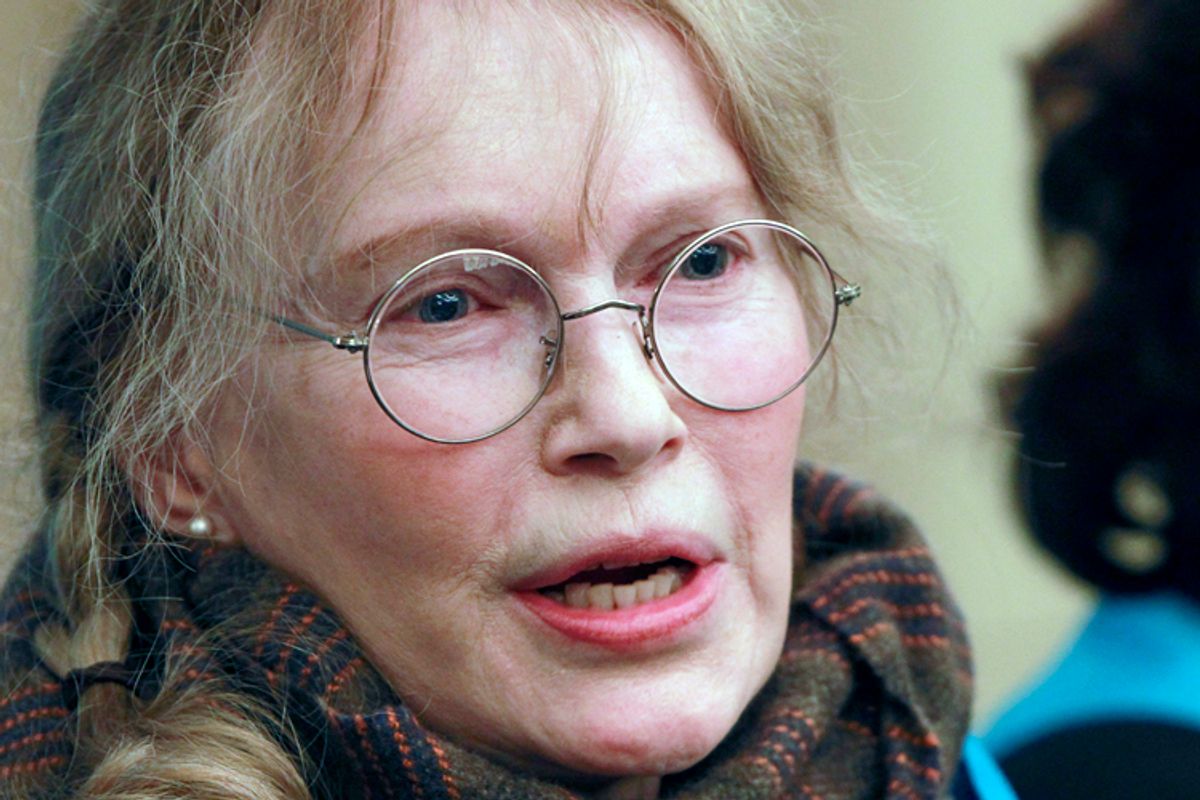 Mia Farrow is outspoken about people she believes sexually abuse children. The day after her former partner Woody Allen was honored at the Golden Globes, she tweeted, "A woman has publicly detailed Woody Allen's molestation of her at age 7. Golden Globe tribute showed contempt for her & all abuse survivors." She was the subject of a lengthy Vanity Fair profile last fall that detailed her daughter Dylan's harrowing allegations of sexual abuse by her father, Woody Allen. But she has been silent on the subject of another sex abuse case in her family – this one involving her own brother.

In October, right around the same time of Maureen Orth's glowing story of Farrow's "triumph," Farrow's brother John Charles Villiers-Farrow began serving 10 years in prison for molesting two neighbor boys. According to the local Maryland news affiliate, authorities said "he abused one victim for seven years, beginning when the boy was nine, and abused another boy from the ages of 8 to 13."

Villiers-Farrow was originally accused in 2012, when the two victims, now young men, came forward with their claims. As NBC notes, "At the time, Anne Arundel County Police had recently received information that several children were sexually abused in the Edgewater area" and asked additional victims to come forward. Court documents say the abuse involved showing the children pornographic films, touching and oral sex.

The 67 year-old Villiers-Farrow maintains his innocence, and says he now simply wants to serve his time and get home to his family. His defense argued that he had never been alone with his accusers, and that they had been trying to get money from him. Last summer, he entered an Alford plea in the case, which means he did not admit guilt, but conceded there was enough evidence for conviction. He did, however, apologize to the victims at his sentencing. In 1992, when Woody Allen was facing similar accusations of sexual abuse, he told People magazine, "[He's] going to be indicted, and he’s going to be ruined. I think when all of it comes out, he’s going to jail."

Unsurprisingly, the simultaneous timing of Villiers-Farrow's conviction and Farrow's flattering Vanity Fair profile, with its detailed recounting of the original accusations against Allen, has led to plenty of speculation and conspiracy theorizing, especially from the pro-Allen camp – though it seems likelier it was just a strange coincidence. But Farrow has never commented publicly on her brother's case, and the arrest and sentencing went largely unnoticed in the national media.  Farrow has also unreservedly supported her "close friend," convicted sex offender Roman Polanski, and testified in his 2005 libel suit against Vanity Fair.

A mother would naturally be far more vocal about a man she believes molested their daughter than a friend or even a brother, but her sustained silence regarding the men in her life who have been found guilty of sexually abusing children is puzzling. It strongly suggests the support she claims for "all abuse survivors" is selective at best. And it makes the supportive message she retweeted a few weeks ago from her friend Carly Simon a little ironic. "It's always right when you speak out against child abuse," it read. "If in your family, It's twice as right. Thank you @MiaFarrow and @RonanFarrow."