Ken Ham's radical quackery: Why his debate with Bill Nye on evolution was so maddening

In a debate about evolution, Bill Nye argued that the creationist Ham was essentially a cultish leader. He was right 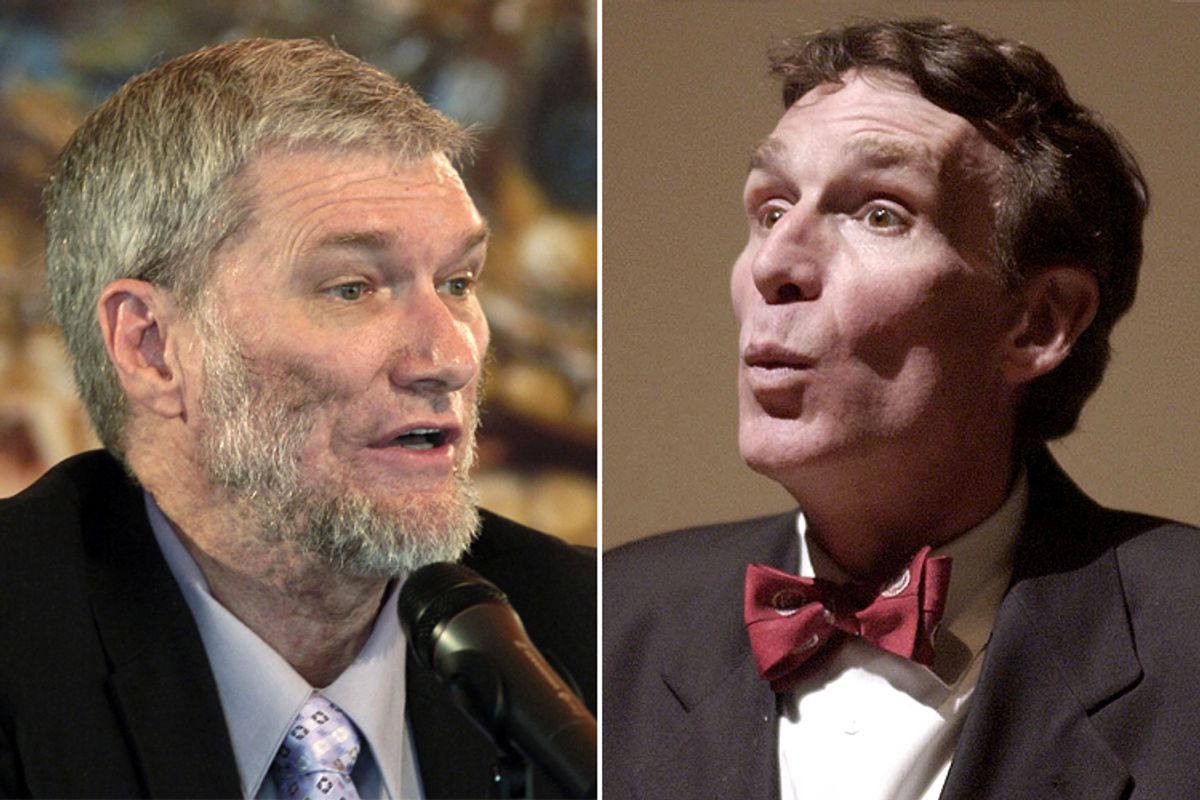 In a much-hyped event live-streamed last night, "Science Guy" Bill Nye set out to defend evolution in a debate with Ken Ham, the CEO of Kentucky's Creation Museum. But there was a fundamental problem: Ham’s young-earth creationism is not a religious belief, and it certainly is not scientific. To put it bluntly, it is quackery.

To understand Ham’s view, we need a brief history of how the Bible is interpreted, and where his radically new heuristic comes from. As Paul Fry notes, literary theory or the study of texts (hermeneutics) was originally developed to interpret the Bible. Interpretations have always been based on contemporary events and politics; for instance, centuries of Christian anti-Semitism were based on an attempt to placate the Roman empire. Biblical literalism as an interpretative method can be traced back to Martin Luther’s denunciation of the Catholic Church and his use of Scripture to undermine their authority. Martin Luther’s democratic mission later combined with the tenets of the scientific revolution and fundamentalist politics to produce biblical literalism, the idea that the Bible is a series of testable assertions that can be proven or disproven and that a layman can read and understand the meaning of Scripture.

Biblical literalism is absurd, but it is simple. The fundamentalist is not interested in deeper truths, but rather weaponizing the Bible. A perfect example is women having authority in church. The verse fundamentalists cite to support this view is from, 1 Corinthians 14, where Paul tells the church of Corinth that women should be silent during the service. In many fundamentalist churches, this verse is used to deny women the right to become pastor, or even pray aloud during the service. Biblical scholar Ken Bailey notes that during this time in the Middle East, services were often held in classical Arabic, which women could not understand (most spoke a local dialect). Throughout the service they would begin to gossip, often so loudly that the minister would ask them to be silent. Paul, Bailey argues, was repeating this injunction in his letter. As Nye notes in the debate, Ham and other fundamentalists are rather selective with the verses they choose to interpret literally. The Rev. Cornel West put it bluntly, “Fundamentalists want to be fundamental about everything except, ‘love thy neighbor.’”

Because Ham’s claims are clearly unscientific (he denies radiometric dating, claims that the Earth is 6,000 years old based on incomplete genealogies and argues that the flood explains tectonic shifts) we must call them what they are: quackery. H.L. Mencken noted that human progress “tends to go too fast -- that is, too fast for the great majority of comfortable and incurious men.” Because of this, he worried that, “the average man, finding himself getting beyond his depth, instantly concludes that what lies beyond is simple nonsense.” This attitude was on display throughout the debate, when Bill Nye would accept ambiguity and Ken Ham simply substituted ambiguity for absolute and uncompromising and entirely unfounded certainty.

Creationism is a fraud. It is like witchcraft, the 9/11 conspiracy theory or homeopathy; it is a closed system, one that reason cannot penetrate. Nye’s decision to debate Ham and the decision to even air the debate was absurd. Bill Nye accepted the debate assuming he was debating about evolution; he was not. Rather he was debating a political issue. As Ken Ham has said elsewhere,  "As the creation foundation is removed, we see the Godly institutions also start to collapse. On the other hand, as the evolution foundation remains firm, the structures built on that foundation -- lawlessness, homosexuality, abortion, etc -- logically increase. We must understand this connection." The Discovery Institute, which touts creationism with a different name (intelligent design), has espoused much the same opinions. Like all fundamentalist movements, they seek to explain all the world’s ills from one source. Barbara Forrest writes, “The ID movement developed out of the rejection of evolution by people who believe that the moral ills of the modern world have been caused by Charles Darwin’s revolutionary idea.”

Both organizations (Ham’s Answers in Genesis and the Discovery Institute) are intimately intertwined with right-wing political causes. In the debate, Ham mentioned these ideas, noting that the biblical definition of marriage is between one man and one woman. The goal is not to defend the absurd idea of young-earth creationism, but rather biblical literalism, the ideology from which fundamentalists draw their strength. If evolution is true, if the Bible cannot be interpreted literally, then women can preach and seek abortion and gays can wed. Throughout its history, religious fundamentalism has been a force to mobilize and defend far-right causes -- creationism is merely a “wedge” to expose children to fundamentalist beliefs.

Throughout the debate, Nye made the observation that Ham was essentially a cultish leader; he asked frequently why Ham’s followers would “believe him instead of what they could clearly see before his eyes.” Ham admitted that, “No one will ever convince me that the word of God is not true.” Unlike evolution, which would be easily falsifiable (As J.B.S. Haldane noted, all it would take to disprove evolution is “fossil rabbits in the Precambrian era.”) Creationism is not falsifiable. Debating a creationist is like debating a 9/11 conspiracy theorist; one enters an alternate realm, one that is entirely self-reinforcing and impenetrable.

As Harry Emerson Fosdick preached in 1922,

The present world situation smells to heaven!  And now, in the presence of colossal problems, which must be solved in Christ’s name and for Christ’s sake, the Fundamentalists propose to drive out from the Christian churches all the consecrated souls who do not agree with their theory of inspiration.  What immeasurable folly!

I have deep and profound disagreements with those who call themselves New Atheists. I worry with Rabindranath Tagore that, “material advantage … has tempted the modern man away from his inner realm of spiritual values,” and that these New Atheists, are the type of “precocious schoolboys of modern times, smart and superficially critical … driven by suicidal forces of passion, set their neighbours’ houses on fire and are themselves enveloped by the flame.” But to degrade and exploit religion, as Ken Ham does, is appalling. It brings us no closer to an understanding of the deep questions that we struggle with. He and his ilk have no place in our intellectual life. I propose, with Stephen Jay Gould and the Catholic Church, that we recognize that religion and science are two entirely different realms.

As Martin Luther King Jr. argued, “Science investigates; religion interprets. Science gives man knowledge which is power; religion gives man wisdom which is control. Science deals mainly with facts; religion deals mainly with values. The two are not rivals. They are complementary. Science keeps religion from sinking into the valley of crippling irrationalism and paralyzing obscurantism. Religion prevents science from falling into the marsh of obsolete materialism and moral nihilism."