Yeah, "The LEGO Movie" is contradictory and nonsensical, but it's also a joyous, imaginative pop-culture ride 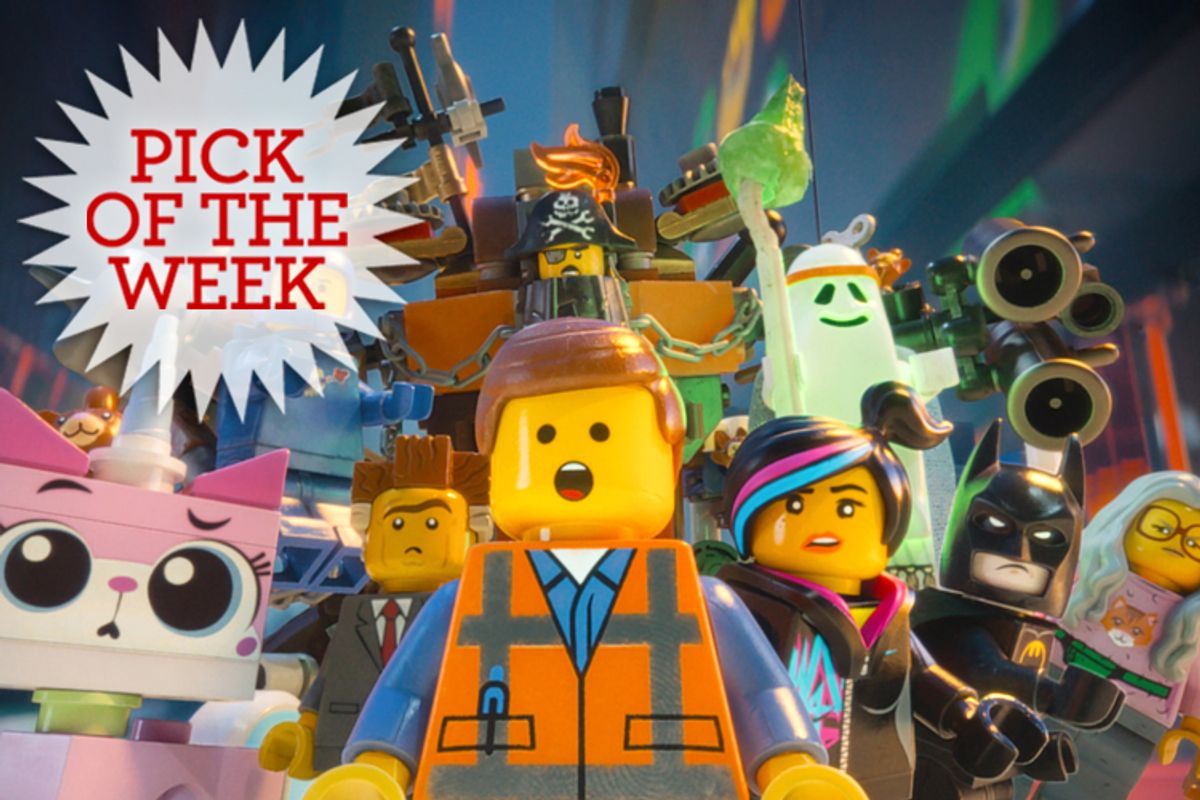 I’m going to join in the general chorus of wonder and delight around “The LEGO Movie,” which is fast-paced, often hilarious fun and involves an imaginative and deeply weird use of cutting-edge digital animation. What could easily have been test-marketed, corporate-processed crap, a branding extravaganza pretending to be a movie, instead becomes a surprisingly enjoyable and satisfyingly dense family entertainment that pays tribute to the spirit of free play and individuality. But, OK, hang on: It’s a branding extravaganza too, and also a fable of highly contingent liberation, in which we surface from one constrained and constricting universe into another. Do you want me to just relax and let you enjoy a mainstream animated film that’s better and cleverer than it needed to be, or do you want me to go deep and dark and overthink it a lot? Thanks, I thought so – you guys are awesome!

Indeed, “Everything Is Awesome,” as the deliberately idiotic and insanely catchy theme song to “The LEGO Movie” puts it. (“Blue skies, bouncy springs/ We just named you awesome things/ A Nobel Prize, a piece of string/ You know what’s awesome? Everything!”) Written (in the non-LEGO universe) by Devo founder Mark Mothersbaugh and performed by pop duo Tegan and Sara with the Lonely Island, it’s the only song ever played on the only radio station anyone listens to in the all-LEGO world of Emmet (voiced by Chris Pratt), an anonymous LEGO figurine and construction worker whose only concern is to follow instructions. As a sinister LEGO law-enforcement robot intones with the song playing at a tense juncture, “That is my jam.” (“That is also my jam,” responds his partner, delivering a LEGO-claw fist-bump.)

We see through the hypocrisy and bogus good cheer of Emmet’s universe at once, just as we’re meant to. Everything is non-awesome: Emmet is a desperately lonely failed conformist, and the apparently benevolent President Business (Will Ferrell) is actually a tyrant, devoted to blowing up “everything weird” and replacing it with soulless and interchangeable late-modernist LEGO skyscrapers. (In other words, he’s Mike Bloomberg.) As we’ve already learned from the movie’s prologue, President Business is actually the evil Lord Business, and only a mysterious non-LEGO object called the “Piece of Resistance” can defeat his apocalyptic secret weapon, known as the Kragle. We pick up some pretty big clues about issues in the extra-LEGO universe as we move along, but never mind that for now.

Furthermore, as a blind wizard-type figurine called Vitruvius (voiced by Morgan Freeman, in witty, laconic style) helpfully explains, “There is a prophecy.” OK, it’s a threadbare prophecy that feels a bit like Vitruvius made it up on the spot: He who finds the Piece of Resistance will be the Special, a “master builder” of awesome power who will unite the other master builders, Avengers-style, and bring down the despotic rule of Lord Business. This Frodo/Harry/Neo figure is of course Emmet, who stumbles upon the nonstandard Piece of Resistance and upon a rebellious, punk-flavored female figurine who calls herself Wyldstyle (Elizabeth Banks) at virtually the same moment. She warns Emmet right away that she’s got a boyfriend and that it’s “super serious,” but does not explain that said boyfriend is actually Batman, or rather the self-absorbed, Goth-flavored LEGO version of Batman, as voiced by Will Arnett.

All of this is delivered rapid-fire, zinger after zinger — much too fast for most kid viewers, I’d say — while trying to straddle the boundary between adventure epic and outright mockery. Visual allusions to fantasy or action movies some of the adult and teen audience has seen come fast and furious (see what I did there?), from the “Dark Knight” series to “Lord of the Rings” to (not kidding) “City of Lost Children.” And of course “The Matrix” hangs over this movie, as it does over all postmodern escape fables about a constructed universe and humanity’s necessarily failed attempts to come face to face with itself, God and the nature of reality. Even the specific situation of the first “Matrix” film is emulated and satirized here. There is officially no race in the LEGO universe, where everyone is lemon-yellow (and everything is awesome), but even here we encounter the white Everyman being told by an African-American sage that he is unique, is in fact the location of rupture in a universe of sameness.

Let’s consider the animation style of “The LEGO Movie,” which is ingenious and even brilliant, but is also delivered beneath a scrim of mystification. It looks like stop-motion animation using LEGO bricks and figurines, and every physical object you see in Emmet’s world appears to be made of LEGO pieces, even the surface of the ocean and the flames from exploding police cars. But they’re not, and in fact none of those objects are physical at all. What we see is actually simulated stop-motion, using meticulously rendered 3-D digital representations of LEGO bricks and assemblies; objects that hypothetically or theoretically could exist but do not. It’s a simulacrum of a simulacrum, an ideal copy of a plastic universe. Inside a movie, which we watch in a multiplex attached to a shopping center in a LEGO-like sprawl … you see where I’m going with this.

I’m not hectoring anybody about how they shouldn’t enjoy the exhilarating pop-culture mashup of “The LEGO Movie,” as in the convention of master builders that pulls together Gandalf, Dumbledore, Superman (Channing Tatum), the overly friendly Green Lantern (Jonah Hill), Abe Lincoln in his jet-propelled chair and the 2002 L.A. Lakers version of Shaquille O’Neal (voiced by himself). In the film’s best moments, writing-directing duo Phil Lord and Christopher Miller (also the team behind “Cloudy With a Chance of Meatballs” and “21 Jump Street”) convey a freewheeling, almost libidinal energy that really does fit the open-ended spirit of those venerable Danish interlocking bricks. But even in delivering the message that Lord Business’ fetish for order is not the true Way of LEGO, there are limits. LEGO long ago forged corporate partnerships with Marvel, Disney, Lucasfilm, DC Comics, Warner Bros. and so on, and those interests are protected. You definitely don’t see Batman or Gandalf taken apart and reassembled with insect arms and bulldozer treads.

There’s a heartwarming and manipulative third-act revelation I shouldn’t tell you about, although we can say that it involves the non-LEGO world and evokes the magical transitions of classic children’s literature. (Obviously this movie is family-friendly, but I’m guessing the audience will skew pretty adult; my 9-year-olds would find it dizzyingly paced and only half-comprehensible.) But Lord and Miller’s ingenious LEGO simulacrum relies on the kind of naive epistemological certainty that the Wachowskis avoided in the “Matrix” trilogy, where it was clear that breaking free of the Matrix was only a temporary liberation that raised uncomfortable and unanswerable questions about the Matrix-like nature of the real world, and our own responsibility for its construction.

In the world of “The LEGO Movie,” everything really is awesome. If the LEGO universe’s version of Lord Business can be overthrown, the real one continues to rule from on high unmolested, and the movie’s critique of conformity becomes its opposite, a benevolent reassurance that the dominant order can tolerate a bit of disorder at the micro-LEGO level. The genuine pleasure to be found in “The LEGO Movie,” this tale of the liberatory force of pop culture as translated into plastic rectangles, is, as someone else once wrote about something else, the heart of a heartless world, the spirit of a spiritless world and “the opium of the masses.” That, as one robot said to another, is my jam.