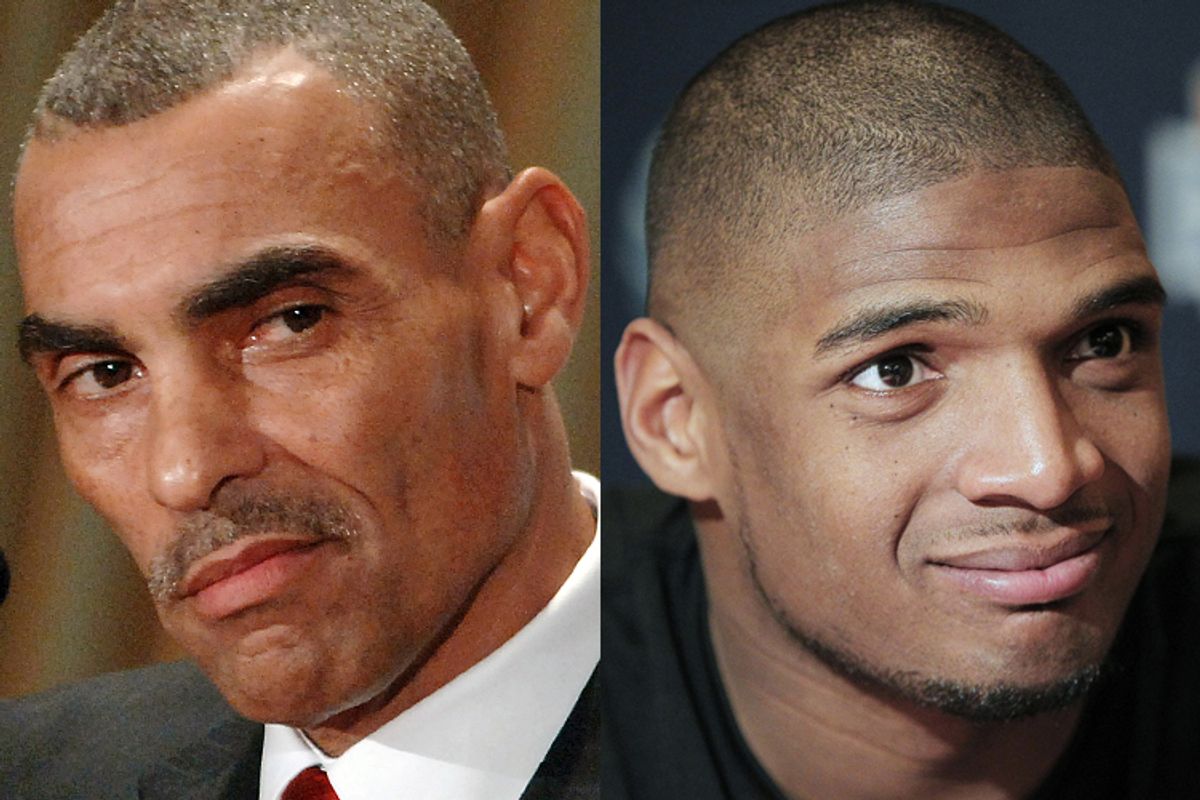 About four years before I came out as queer, a high school teacher asked our class how many of us would be comfortable changing in front of a gay person. I don’t think anyone raised their hand. I’m sure I didn’t.

That squirmy high school moment came to mind when I saw ESPN analyst and ex-NFL player and coach Herm Edwards, in response to Michael Sam’s coming out, compare him to “a player that has some issues, off the field issues” who’s “bringing baggage into your locker room.”

I’m sure Edwards would insist he’s no bigot, just as everybody in America insists they’re no bigot. But Edwards’ warning, if inartfully composed, offers an unintentionally elegant reminder of how heterosexism asserts and sustains itself. Not just through the bald fear and disgust we most often call homophobia (well-captured in the fear of predatory homosexuals invading the shower, as if straight bros’ locker room interactions were free of sexual surveillance, anxiety or bullying). But also through the insistence that anything other than normative heterosexuality is an issue, an event (maybe even an aggression), while straightness is unremarkable and un-remarked-upon. It’s called “straight” for a reason.

The epic time and energy devoted to performing, asserting and enforcing heterosexuality (just watch a Super Bowl ad) goes hand-in-hand with the assumption that any individual’s heterosexuality is a non-event. When projected first round NFL pick Manti Te’o told reporters about his (apparently mythical) girlfriend, Herm Edwards didn’t accuse him of dragging his heterosexual baggage into the locker room. That’s the asymmetry at hand: Sam’s sexuality is noteworthy and suspect, while Te’o's relationship only became baggage when it was revealed as a hoax. Similarly, Proposition 8 Judge Vaughn Walker was accused of being unable, as a gay man, to rule fairly on gay marriage, whereas heterosexuality (or whiteness, or U.S. citizenship) doesn’t get called out as a conflict of interest.

Sitting in that classroom back in high school, not yet having acknowledged to myself or intimated to anyone that I was anything other than straight, I took the lesson that being gay could make people afraid to share a locker room with you. But thinking back on it, I’m mostly struck by the teacher’s comfort speaking as if everyone in the room was presumptively straight. Despite swift progress, heterosexuality remains largely omnipresent, assumed and therefore invisible. Deviation (be it claiming queerness or just actively questioning one’s sexuality) comes at a cost – like getting accused of dividing your team, or undermining your sport, by introducing your “off the field issues.” (Note that the NBA’s Jason Collins, in coming out last year, wrote that he’d held off during the season so as to “not let my personal life become a distraction.”)

That’s why Michael Sam’s coming out is a big deal. And it’s why I appreciate his choice, like Collins’ last year, to actually acknowledge (in interviews with ESPN and the New York Times) that it wasn’t easy. “It’s a big deal …” said Sam. “It’s kind of a nervous process, but I know what I want to be.” He shared that after coming out to his teammates last year he was “so proud of myself and I just didn’t care who knew,” but also that as word spread beyond the team, he’d recently been “afraid that someone would tell or leak something out about me” if he didn’t come forward first and “own my truth.” That kind of account beats the coy alternative of claiming the question had never previously come up, and letting straight America off the hook by implying there’s nothing hard about coming out.

The NFL put out a full-throated statement Sunday welcoming Sam’s expected entry to the league. But his move follows a player’s 2013 allegation that scouts seek to suss out draft prospects’ sexuality. And Sam’s agent, Joe Barkett, told Out Sports that “At the Senior Bowl, it was the first question I got from the scouts almost every time.” Questions, according to Barkett, like “Who is his girlfriend? They didn’t ask that about another client, Tom Hornsey. They only ask it about Michael.” So much for the “baggage” claims offered by Herm Edwards – and the larger number who more explicitly or subtly share them.