An #unapologetic campaign has a lot to be sorry for 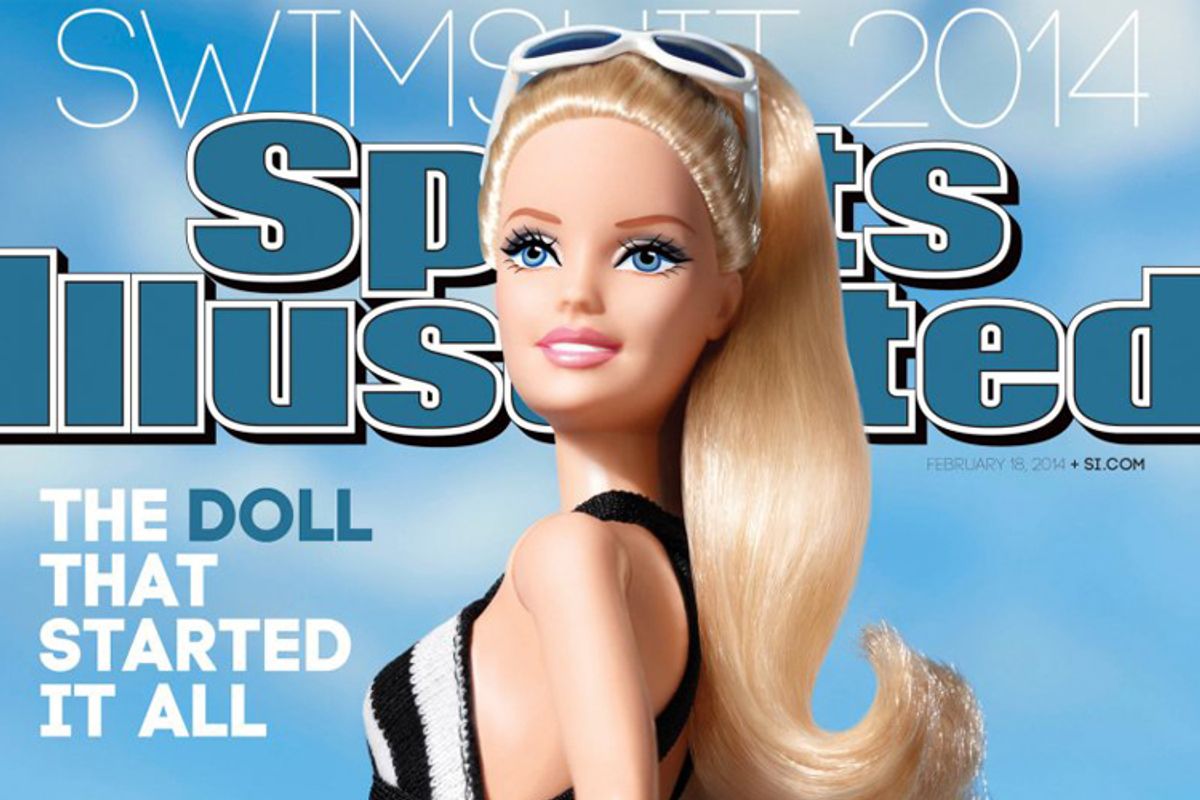 The legendary Sports Illustrated swimsuit issue has never been a paragon of authentic depictions of women. It's instead famed for being pure fantasy. But for its cover this year, the magazine has decided to dispense with even the pretext of realism, by trotting out a bloodless, nearly 55-year-old female who's a collection of fake body parts. To the pantheon of Christie and Cindy and Elle and Tyra and Kate, a new name has been added: Barbie.

The swimsuit issue has always been comfortable with stirring up potentially controversial swimsuit issues. It's featured models wearing nothing but body paint. Just last year, it took a heap of flak for its use of people of color as "props" for its bikini-clad babes. But the choice of Barbie as cover girl is unusual for an issue generally understood to be primarily a self-pleasuring tool for dudes. Perhaps SI is now aiming for the 7-year-old girl demographic.

On the cover, the legendary blonde is called the "doll that started it all" and poses with her head turned saucily over her shoulder and her hand jauntily on her hip. And in SI and Mattel's campaign for the cover, she comes bearing the defiant hashtag #unapologetic. This is not the demure, wide-eyed toy generations of girls have grown up with. She's appearing in Target this month as Sports Illustrated Swimsuit Barbie, but you can also call her Suck On It, Haters Barbie.

Inside the new issue, an advertising spread by photographer Walter Iooss Jr., who has shot famed SI swimsuit models from Cheryl Tiegs to Kate Upton, pays homage to other "legends." A Mattel spokesperson told AdWeek this week that "Every year the Swimsuit edition sparks conversations about women and body image, and Sports Illustrated stands unapologetically behind this issue that women, in reality, love. Unapologetic is a rally cry to embrace who you are and to never have to apologize for it." In a statement, Mattel said the campaign celebrates "some of the world's most famous swimsuit legends -- like Barbie -- who have gone on to break boundaries, build empires and shape culture." The company added that, "As a legend herself, and under constant criticism about her body and how she looks," posing for SI "gives Barbie and her fellow legends an opportunity to own who they are, celebrate what they have done and be #unapologetic."

As a colleague notes, this is what is known as obvious trolling. You plan on getting mad again this year about hot, barely clothed women in a sports magazine again this year, world? Here. Here's a plastic one. Here's every woman's first role model of an unattainable body image. Happy now?

Mattel, which has faced steeply declining sales in the past several quarters, may have thought that presenting its most iconic figure in this new light would be a great way to get attention. And attention it has received. But now what? Does that translate into bigger sales, or even meaningful conversation? Barbie is not a contestant on "The Biggest Loser." If she has endured criticism for her body, let it be remembered that it has never penetrated her tiny, rubbery ears. She's not a survivor or an innovator or a role model. She's not a person. She's a freaking mass-produced doll. So you don't get to trot her out as some badass champion of body positivity, and you sure don't get to do it in the pages of a magazine whose annual swimsuit tradition revolves entirely around trying to incite boners to the max.

Barbie herself isn't a tool of oppression -- I played with her, my daughters have played with her, and so far we've all somehow managed to avoid being BRAINWASHED BY THE PATRIARCHY. Sometimes she even gets to do cool stuff like be an engineer or a doctor. But by turning her into an SI model, Sports Illustrated and Mattel are making a statement, and that statement is, "We both get called out all the time for sexism and we think it's ridiculous so ha ha ha here's Barbie where Heidi Klum used to be."

Thanks for the cheeky condescension, corporate halfwits. And by the way, good luck with all that. Maybe SI swimsuit model Barbie will be a blockbuster at Target, but I imagine some parents might want their daughters' toys to fall under a different aspirational rubric than "something men like to leer at." And a toy on the magazine cover doesn't suggest quite the same, grab-it-from-the-newsstand, gotta-have-it quality that something involving Irina Shayk might. Think you're going to get a lot of sales outside the weird doll collector audience? By all means, keep laughing. But the joke here is on you.

UPDATE: Never fear, sexy babe fans. The Barbie cover was distributed in strictly limited quantities as an ad wrap at the recent Manhattan Toy Fair. The newsstand edition will feature a trio of living, breathing, super hot models -- who are still almost exclusively the only type of women SI puts on its covers.