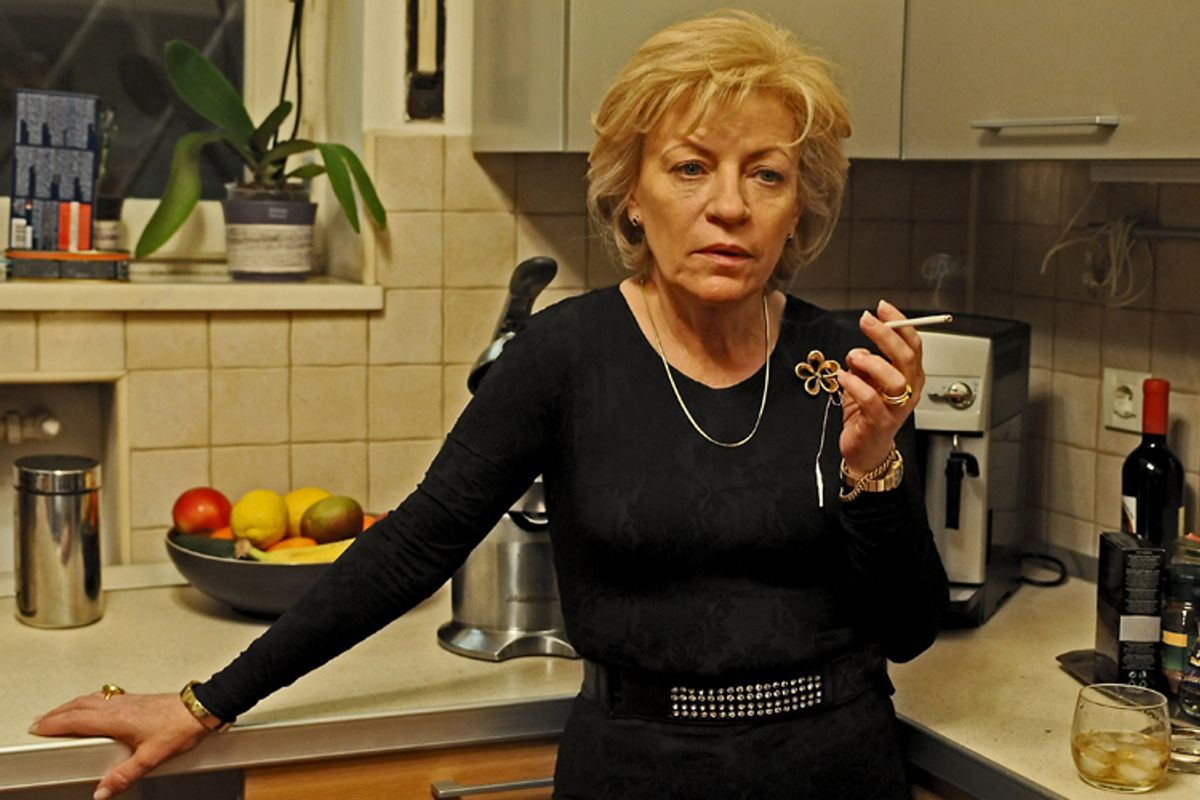 A mother and adult son in a lifelong love-hate relationship (for reasons that remain implied rather than explicit), a not-so-hidden class conflict in a society still poisoned by the corruption of the past, a dense nest of family backstabbing and mistrust and a tragic accident that leaves one person dead and another life potentially in ruins. Those are the ingredients in writer-director Calin Peter Netzer’s “Child’s Pose,” winner of the Golden Bear at last year’s Berlin Film Festival, a gripping psychological thriller built around the luminous and terrifying performance of Luminita Gheorghiu, who is something like the Meryl Streep of Romania.

I understand why people get scared off by subtitled movies from far-off and forbidding-sounding nations, but if you’ve sampled any films from the recent Romanian wave — like the surprise international hit “4 Months, 3 Weeks and 2 Days” or “The Death of Mr. Lazarescu” — you know they tend to be lean, naturalistic and unpretentious. Romania itself is a fascinating collision of cultures, an Eastern European nation that borders Bulgaria, Serbia, Hungary and Ukraine, with a Romance language that’s not far from Italian. Some Romanian pictures can indeed be more arduous viewing experiences, and that’s mostly about length or degree of plotlessness; I wouldn’t necessarily recommend Cristian Mungiu’s “Beyond the Hills” or Cristi Puiu’s “Aurora” to neophytes, although both are terrific films. “Child’s Pose,” despite its baffling title, is more of a gateway drug, a tightly structured family tragedy with elements of black comedy, clocking in at just under two hours.

At first, Netzer allows us some time to get used to Cornelia (Gheorghiu), the affluent Bucharest woman with a taste for sweet liqueurs, extra-long cigarettes and “Absolutely Fabulous”-style clothing who will be our ambiguous protagonist. Cornelia complains constantly to anyone who will listen — mostly her henpecked physician husband (Florin Zamfirescu) and her best friend, Olga (Natasa Raab) — about her estrangement from Barbu, the son who has boxed her out of his life and moved in with a single mom Cornelia none-too-subtly looks down upon. But even though the first few scenes of the film feel casual and almost improvised, Netzer is building an acid-tinged portrait not just of his fearsome central character but also her cosseted world of ski vacations, BMWs, upscale kitchen hardware and a nest of connections in Bucharest’s semi-corrupt bureaucracies.

Although Barbu (Bogdan Dumitrache) and his single-mom girlfriend Carmen (Ilinca Gola) ultimately become important characters, Netzer keeps them offstage for a good while, until well after the point when Cornelia is pulled out of an opera rehearsal to hear the news that Barbu has killed a teenage boy in a road accident. When we meet Barbu and Carmen, they already look hollow-eyed and haunted by what has happened — but then again, it’s clear they’ve had a dreadful relationship with Cornelia for some time. Meeting someone in this kind of film is a lot like meeting them in real life; there are no helpful montages or expository monologues to explain the back story, and we infer or deduce it as best we can.

From the moment of the accident, not a moment is wasted in “Child’s Pose,” which was shot in gorgeous widescreen by Andrei Butica on the Arri Alexa, the most “film-like” of all the digital cameras in use at the moment. Several plots are in motion at once, not all of them visible: Cornelia genuinely wants to keep her only son out of prison, but also seizes on an opportunity to reel him back into her orbit. Barbu must decide whether to allow this forbidding gorgon to exercise control over his destiny, while realizing full well that she can rescue him from this predicament if anyone can. We, in the audience, begin to piece out the nature of Cornelia and Barbu’s relationship, and to glimpse some faint, bitter hope for a better future between them. And all of them, even Gheorghiu’s manipulative Machiavellian mastermind, must confront the grief of a downtrodden family, in a neighborhood Cornelia would never visit on purpose, that has lost a child for no good reason.

Gheorghiu begins with a character who seems so platinum-dyed and Eurotrash-vulgar that we’re not sure we can stand her company for two hours, and ultimately brings Cornelia into a quite different register. If she never seems noble she is recognizably human, and not without compassion and courage. As she pretty much says to Carmen during their only scene together, Cornelia has used all her guile and intelligence and accumulated wisdom to advantage in a corrupt and disordered society where being female is still a liability. In her own way, she tries to repair the damage of her biggest failure, a son who does not love her. And in the tender, wrenching and note-perfect final scene, “Child’s Pose” offers a hint of Dostoevskyan redemption, seen (quite literally) in the rear-view mirror.