Now the banks are ruining pot! The inside story of their latest blackmail ploy 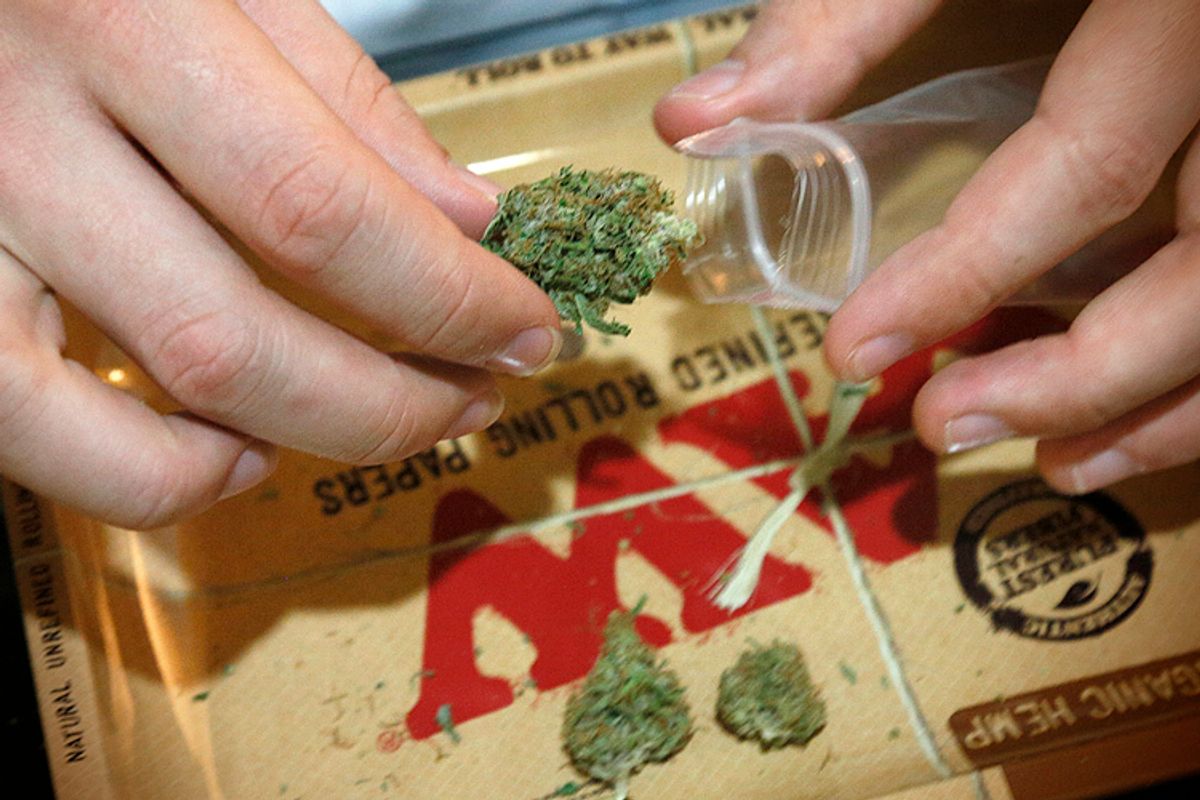 Legal marijuana businesses and their allies thought they earned a victory Friday. As I reported last month, traditional banks and credit unions have refused to do business with the legit pot industry for years, because the product remains illegal at the federal level, and financial institutions said they feared prosecution for money laundering. But last Friday, the Justice Department and the Treasury Department’s Financial Crimes Enforcement Network (FinCEN) teamed up to provide guidance to banks, intended to pave the way for working with marijuana shops and distributors.

The rejoicing was short-lived. Frank Keating, the head of the American Bankers Association – and the former Republican governor of Oklahoma – said the announcement “doesn’t alter the underlying challenge for banks,” and would not fundamentally change bank wariness. Local trade group chieftains in Colorado and Washington, states that have legalized pot for recreational use, were similarly circumspect. “This amounts to ‘serve your customers at your own risk,’” said Don Childears of the Colorado Bankers Association.

The bankers all claim the administration did not offer enough assurances that no prosecution would arise from doing business with the marijuana industry. That masks the real complaint: Banks want to be free from paperwork requirements. As ever, the goal is less about legal immunity – which banks can always obtain after a crime has been committed – and more about deregulation.

A look at the FinCEN guidance reveals this. Under normal circumstances, any bank that believes a client’s transaction violates the law in some fashion must file a Suspicious Activity Report (SAR) with FinCEN. According to the guidance, banks would still have to file SARs for legal marijuana businesses. However, they could be labeled “marijuana limited” and contain very basic information: just the name and address of the business, the fact that the bank is filing the SAR only because the business is marijuana-related, and the fact that no additional suspicious activity has been uncovered. Banks would be expected to perform continuing due diligence to determine whether the marijuana-related business has violated one of the priorities listed by the Justice Department that would trigger enforcement (such as selling marijuana across state lines or to minors, or using a legal pot shop as a cover for other illegal drug sales). FinCEN offers guidance on “red flags” for gauging whether a marijuana business has crossed over into illegal territory. Some of these are judgment calls, like whether the business receives too much revenue. But most fall under the normal process of verifying business licensing, scanning for out-of-state deposits or keeping aware of criminal indictments of the business owner.

Banks would not have to file a “marijuana limited” SAR more than three times a year, and it could literally be a photocopy, with updates only to transactions made since the previous filing, records already kept by financial institutions. And the due diligence is not much different than what banks are required to perform for all of their business customers. These are not overwhelming hurdles requiring massive amounts of time and effort, and even if they were, banks could pass the costs on to the customer.

However, hiding behind anxiety over future prosecution, banks have mostly rejected that the guidance allows them to work with marijuana-related businesses. It’s a virtual guarantee that, if the paperwork requirements were lifted, most banks would jump in with the pot industry. The Colorado Bankers Association gives the game away, in fact, by complaining that the guidance “is simply a modified reporting system for banks to use.”

Why would banks resist even such mild paperwork requirements? Because they benefit from depicting any bureaucratic measure as unmanageable and meddlesome. This has a demonstrable effect with regulators, who then become mindful of making requests of the financial industry, whether with suspicious activity reports or the Volcker rule. In sports it’s called working the refs, and given the power and influence of Wall Street, it typically works quite well.

It’s not like banks are forever diligent with complying with the law, especially with money-laundering regulations. French-based BNP Paribas is under investigation right now for transacting with countries banned by U.S. sanctions, the latest in a series of money-laundering cases against practically every major bank doing business in America. By contrast, FinCEN director Jennifer Shasky Calvery cannot think of one instance of a bank being prosecuted for taking deposits from legitimate marijuana businesses, and stressed that the organization would not crack down on banks for occasional mistakes or omissions. “We’re not looking to have a gotcha enforcement regime,” Calvery said on a conference call last week.

You would think that banks wouldn’t pass up the opportunity to work with a newly lucrative business, a creditworthy client and a source of revenue for any financial institution. But taking deposits and making loans – you know, banking – has become less of a priority for commercial banks over the past several years. The loan-to-deposit ratio for banks is at a 35-year low, and loans are the lowest percentage of total bank assets in recorded history. This makes sense when you consider how much of those assets have shifted into more rewarding (and potentially more damaging) derivatives trading, and cash reserves, which banks can collect interest on with no risk.

As a result of all this, marijuana shops and distributors will continue to face a security risk from conducting a large part of their business in cash. This presents an unnecessary target for criminal theft and places burdens on entrepreneurs that practically nobody else needs to contend with. If pot businesses want a bank account, they have to fib about what they do, exposing themselves to additional legal scrutiny. The inability to secure commercial bank loans threatens to stunt the growth of the industry, with impacts on state tax revenue and the broader economy. A state can agree that they would be well-served both economically and even morally with a legal, properly regulated marijuana regime, but that won’t matter if nobody can easily sell the product.

There is no question that banks would feel more secure if federal law were changed authorizing banks to conduct business with the legal marijuana industry (which would also signal the end of suspicious activity reports). Congress ought to pass such legislation; heck, the attorney general should reschedule marijuana as a less dangerous drug and end the federal/state discrepancy, which he could do tomorrow.

But let’s not be naive here. The end goal for banks, in this and most other situations, is to relax and eliminate regulations wherever possible. This may just be a paperwork requirement, but the mentality applies to just about everything banks do.

With finance such an overwhelming part of the U.S. economy, the banking industry believes it can simply make demands on government to rid them of any burdens and expect them to obey. The implied threat in this case is that banks will decrease public safety, and strangle an experiment sanctioned by voters, without personal legal immunity and regulatory relief. The problem here is not that banks want to avoid prosecution for legitimate activity; it’s that they simply expect total compliance. Banks do not have the track record to support such a hands-off approach. They have burned whatever trust they had.

The way to solve the pot banking issue is to change federal law. The way to solve the much more harmful issue of financial overlords dictating terms to the nation, using the economy as blackmail, is to break their political power and end the deferential treatment.