Why libraries deserve to be hip

They face budget cuts and closures, but they're a lifeline for people like me. Libraries should get more respect 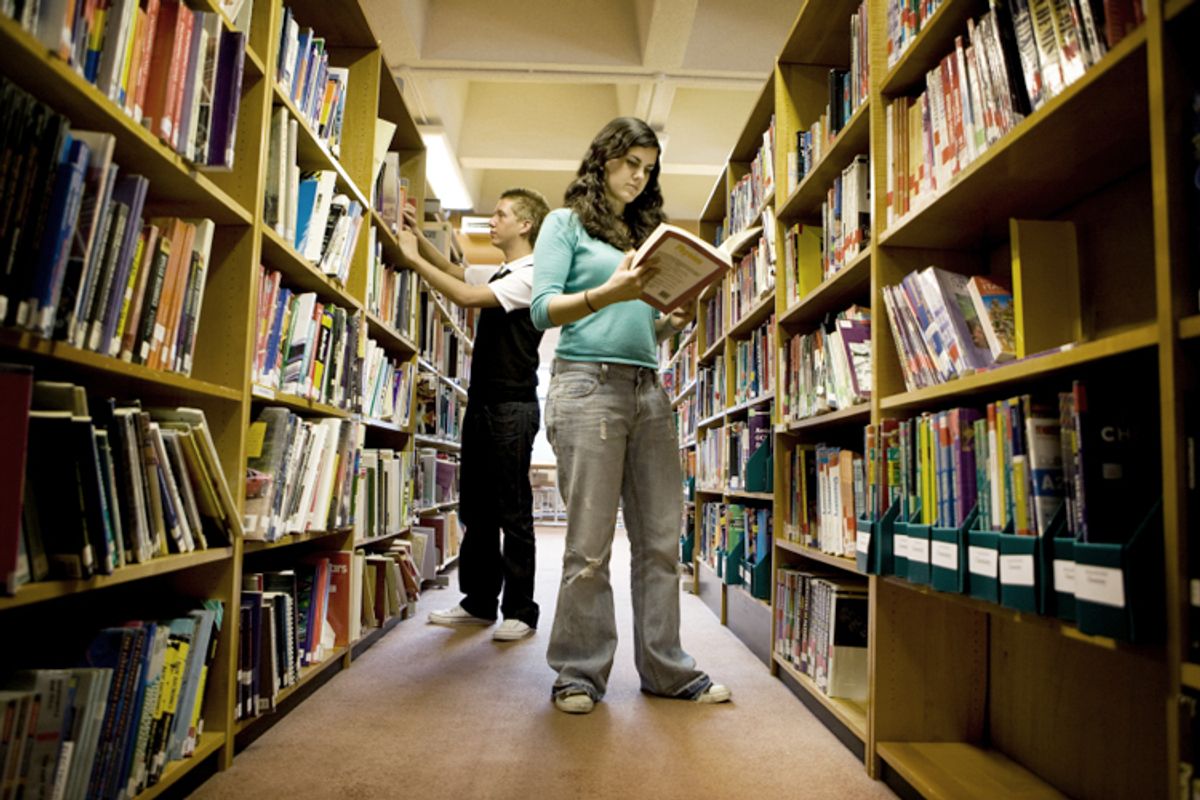 This afternoon, I'm picking up my younger daughter from school and I'm taking her someplace special. It's a place she and I can look at works by local artists, where we can read quietly together, where we almost always run into friends. It's one of best places in the world. You've probably got something like it where you live too. It's called the library.

Libraries are not terribly fashionable. You'd think they would be. In a world in which educated, enlightened, planet-hugging types are all up in that composting and upcycling and no impact lifestyle, these wonderful places where you can just borrow stuff and then bring it back so someone else can enjoy it somehow languish. Last year was the first year in several that New York City libraries didn't face any budget cuts -- though branches shut after Hurricane Sandy remain unrestored. Libraries in Detroit have been shuttered in the city's economic crisis. In the U.K., libraries face closures as the number of people using them plummets.

I should not have to sell anybody on the idea that libraries are awesome. But in case you haven't been to one lately: Libraries are awesome. Maybe you need reminding. I get that. Though I'd like to say that I've always had a native love of them myself, it's not true. I came to them later in life. I've always loved to read, but I didn't grow up in an especially bookish household. Trips to the local library were exceptionally rare. My first consistent era of library-going was in college, where I learned to associate libraries with microfiche-induced migraines and hung-over naps. Then when I lived in Boston, I became a member of the Athenæum, one of the most gloriously beautiful sanctuaries for books on the planet. And then, after that, I had children.

When you're a mother desperate to entertain young kids and the winter afternoons are long, dark and cold, those preschool story times are the bomb. I loved my little Brooklyn library. And when, shortly after moving to my current neighborhood eight years ago, my family was thrust into a serious economic crisis, our new library became our new greatest resource. There was a free after-school science program I enrolled the kids in. There were events and performances. Best of all, there were piles and piles and piles of DVDs and reading materials. Storybooks. Crafts books. Parenting books. Books on how to get through cancer. In the ensuing years, my family and I have grown to appreciate our local branch so deeply, because we know whatever else life may throw at us, as long as that library is there, at least we will never run out of books.

My daughters are growing up in a world in which libraries are largely optional. They do their homework via Google. My friends vary from enthusiastic library supporters to plenty of quizzical, "Is that a book made of paper you're reading? Are those numbers on the spine?" types. That's OK. The world is changing and so are libraries. The NYPL, for instance, has come under criticism for its plans to renovate in ways that would remove research materials in favor of a more "populist hangout" design.

I'm no foe of research, but I am grateful for the hangout aspect of libraries as well. As Caitlin Moran perfectly states, "A library in the middle of a community is a cross between an emergency exit, a life raft and a festival." I'm lucky to live in a city where I can take my family on the subway and go to a main branch that is an architectural work of art, where we can attend world-class lectures and exhibits. But I'm happiest on the long afternoons I spend in our small uptown branch. I like being among the people who come to my branch for English language classes, the retirees who sit and read the newspaper, the rowdy kids who are killing time before they go home, and moms of young children reading their tots Ezra Jack Keats. My library is rarely quiet. I like it that way. It crackles with life.

And I still buy books, but they're a very special luxury in a typically New York City life in which money and apartment space are both in short supply. I'm sure someday I'll get around to getting a Kindle or an iPad, but right now, I'm content with the smell and the texture of paper books, especially the from-the-library kind. I love knowing the book I have for a little while is on a journey through many different hands. I love finding the receipts and the postcards inside them, and imagining who they belonged to. I like the connection. Reading is solitary but libraries are shared. Once, during a difficult period when I was looking for answers, I took out a self-help book and found a sweet, supportive letter to the next person who needed it tucked within. The note ended with an encouraging "Good luck to you!" and it made me smile when I read it. The book itself, it turned out, wasn't that hot. But the note got me through. And when I returned the book to the library I left the message there, for the next person who checked it out.