Pick of the week: The director of "Paradise Now" is back with a twisty West Bank tale of betrayal and brutality 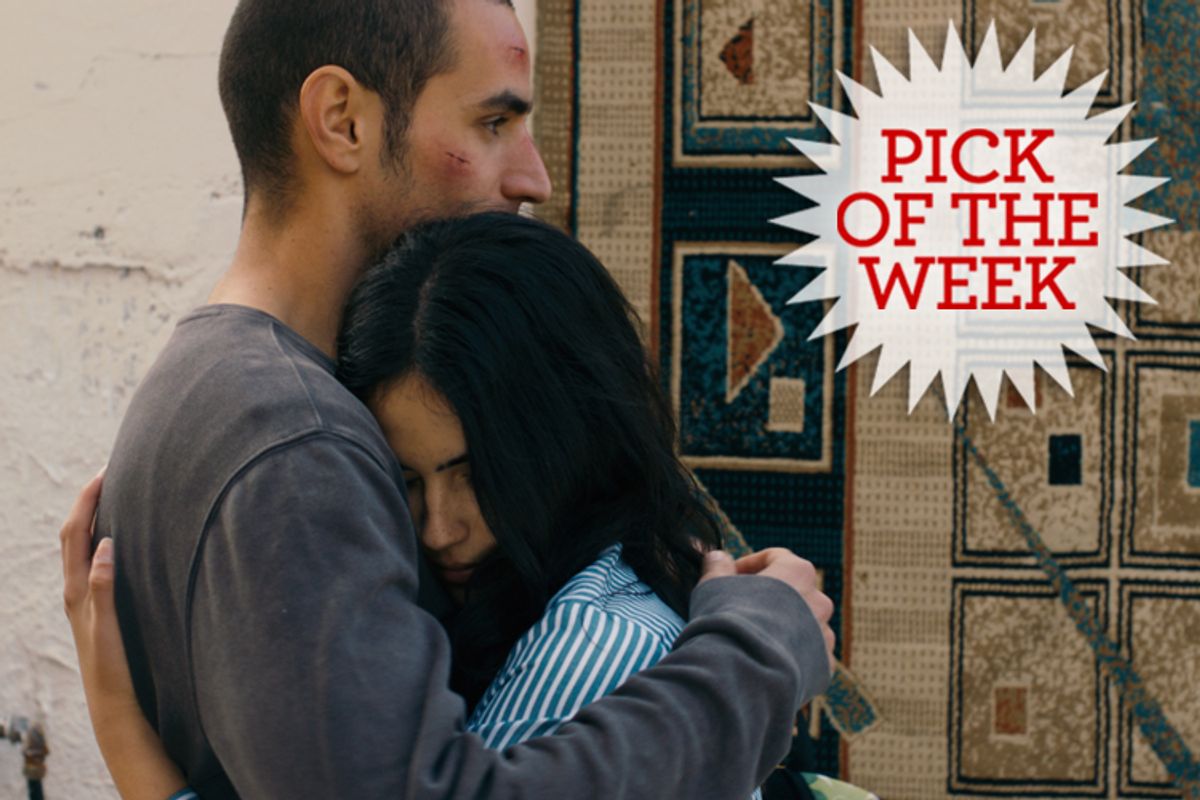 If Alfred Hitchcock had grown up as a Palestinian, he might have made something like Hany Abu-Assad’s Oscar-nominated “Omar,” which is a tender love story, a haunting tragedy and an expertly crafted thriller with flawed, damaged and not entirely likable characters. I’m not suggesting that Abu-Assad, a former aeronautical engineer who made the controversial terrorist drama “Paradise Now” in 2005 (also a foreign-language Oscar nominee), is quite on Hitchcock’s level. But he has a bit of that deviousness and ironic detachment, a bit of that glee in leading the audience into ideological traps and mistaken conclusions. Every shot and every seemingly aimless conversation in “Omar” has a purpose. If “Paradise Now” was a movie about a bomb that goes off at the very end, “Omar” is itself a similar kind of bomb, ratcheting itself up to a shocking final explosion that seems inevitable in retrospect.

I’m not leading with the so-called political questions about Abu-Assad’s work — How does he present the Israeli occupation? What is his attitude toward Palestinian resistance and/or terrorism? — for several reasons. Those questions may be irresistible, but they’re also kind of dumb. Essentially, they're rhetorical traps that do more to foreclose discussion than to enable it. I’m also taking Abu-Assad at his word that he doesn’t see himself as a political filmmaker first and foremost, and he hated being turned into a flag-waving spokesman for the Palestinian nation during the international kerfuffle around “Paradise Now.” (There were various protests against the film from Jewish and Israeli groups, including a petition signed by victims of Palestinian suicide bombings arguing that the film encouraged such attacks and that its Oscar nomination should be rescinded.)

There’s been relatively little political blowback around “Omar” so far, both because it’s more obviously a genre film, mixing cat-and-mouse thriller with Romeo-and-Juliet doomed romance, and because its violent acts are, so to speak, more normal. Nobody tries to blow up a city bus in “Omar,” and we have no indication that the title character believes a pile of naked virgins awaits him in Heaven. (Abu-Assad’s portrayal of Palestinian life, in both films, is notably free of any reference to Islam.) But both this film and “Paradise Now” depict the occupation as a corrosive force that poisons everyone it touches, Arab or Israeli. (Let's note that Abu-Assad is both Arab and Israeli, having grown up in Nazareth, not in Gaza or the West Bank.) If you really want to talk political philosophy, I see almost no difference between the view expressed in Abu-Assad’s films and the one expressed by former leaders of Shin Bet, Israel’s internal security service, in last year’s amazing documentary “The Gatekeepers.”

When I say the violence in “Omar” is normal, that implies that it’s normal for a handsome and healthy young man with a decent job — the eponymous Omar, played by charismatic newcomer Adam Bakri — to get involved in a pointless attack that will alter the course of his life, and not in a good way. It’s perfectly true that Abu-Assad never editorializes about the morality or usefulness of the idiotic scheme that Omar and his pals cook up to ambush and kill an Israeli soldier with a hunting rifle. It’s presented as almost a natural outgrowth of a situation of boredom and frustration, not too different from the crimes other young men might commit in Brussels or Rio or Cleveland. Omar’s older and more seasoned friend Tarek (Iyad Hoorani) may have connections to Hamas or some other militant group, but he’s also just a dude, one who does a pretty funny Marlon Brando impersonation and tells bad jokes. (Maybe the jokes aren't that bad: A guy goes to buy cigarettes, and then reads the warning on the package: “Smoking can damage male sexual function.” “No, wait,” he tells the clerk, “can I have the one that will give me cancer instead?”)

But Omar and his younger friend Amjad (Samer Bisharat) have no such connections; they’re not religious zealots and you never hear them talk politics except in the most abstract terms. They want to impress Tarek largely because they’re both in love with his gorgeous 17-year-old sister, Nadia (Leem Lubany), and harbor vague dreams of a better life, which hover in the background like the anodyne happy-family billboards that cinematographer Ehab Assal often captures in the middle distance. (This is yet another digital film shot in sparkling clarity on the Arri Alexa. I’m developing a critique of that camera, but I’m not sure what it is yet.) Omar has good reason to believe that Nadia likes him best, and they’ve already started to talk about where they’ll have their honeymoon (Mozambique or Paris? A tough choice) once Tarek and her family agree to the marriage. Is there something just a little false, a touch too sweet, about their scenes together? Yes, and I think it’s purposeful.

Abu-Assad follows Omar through the streets and alleys of the West Bank, and back and forth over the separation wall between Israel proper and the territories, although the obvious symbolism of that dividing line becomes more loaded as the movie goes on. But after the shooting Omar, Tarek and Amjad become hunted men, and it’s obvious the Shin Bet knows more about what happened than they should. One of the three, or someone close to them, is already an informer, a fact that an ingenious, Arabic-speaking Shin Bet agent named Rami (Arab-American actor Waleed Zuaiter, who also produced the film) uses in order to twist a non-confession out of Omar and use it to his advantage. While others have found the character of Rami too crude, I think the ambiguous, manipulative relationship he develops with Omar is brilliantly handled. In another context, we sense, these two men might genuinely like each other, and there’s an undercurrent of mutual respect beneath the coercion and the mistrust. But as things stand, their shared destiny is disastrous.

Omar tries to play double agent — telling Rami he will lead him to Tarek, and promising Tarek to help him stage another violent ambush — but finds himself increasingly isolated. Nadia buys into the village groupthink that he’s a traitor, Tarek and the other Palestinian militants will never quite trust him again, and even innocent-seeming Amjad harbors unsuspected secrets. “Omar” deliberately blurs the distinction between political betrayal and personal betrayal, perhaps to argue that a disordered situation like the occupation enables both, and that one is not necessarily more important than the other. If you want an inspiring political essay about the plight of the Palestinian people, or the promise of a hopeful future, look elsewhere. “Omar” is a story about a place where ordinary people, decent enough on their own terms, destroy each other and themselves. When the cascade of violent climaxes comes, you’ll see it was there all along.