"I used to say to him...you’re just going to have to turn the other cheek...Because people nowadays will shoot you" 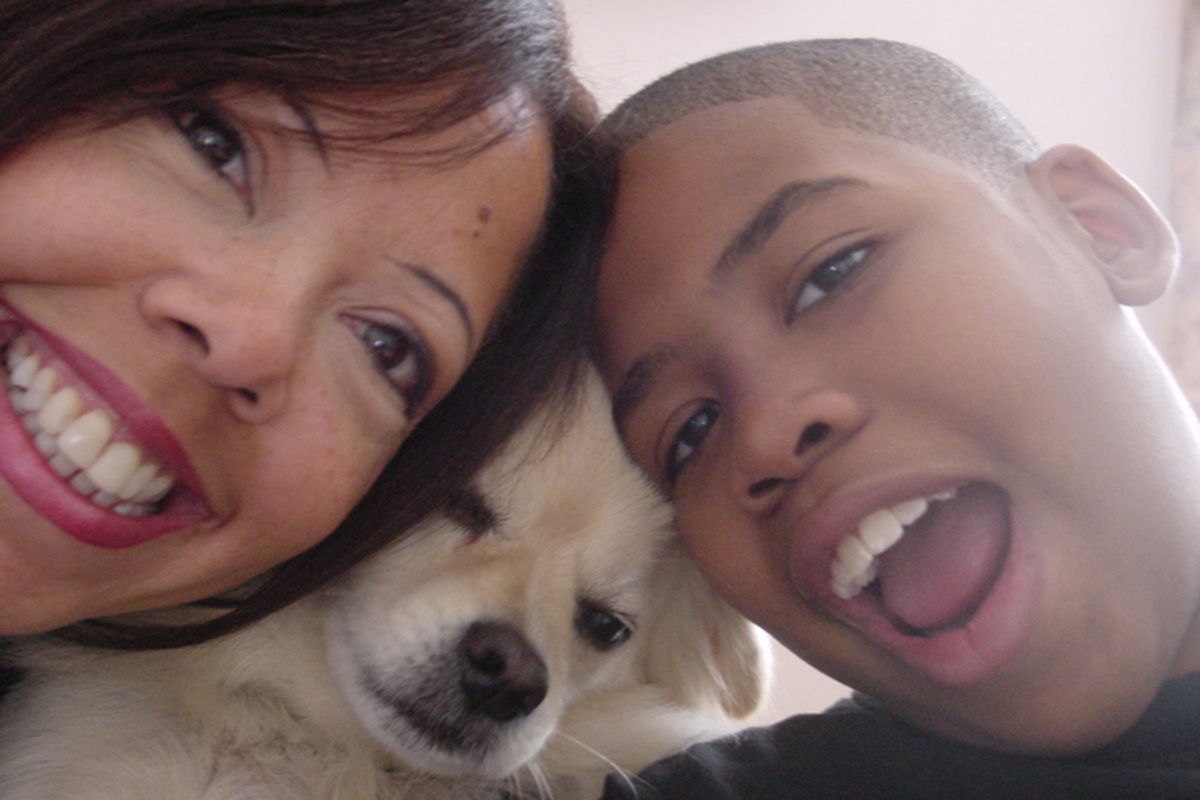 On Nov. 23, 2012, Michael Dunn, 47 and white, shot and killed Jordan Davis, 17 and black, after a verbal dispute over the music coming from the SUV Davis and his friends had parked outside a gas station. On Feb. 15, 2014, a Florida jury convicted Dunn on three counts of second-degree attempted murder, for shots Dunn fired at the SUV as it was driving away, but couldn’t reach a verdict on the charge that Dunn murdered Davis. Dunn claimed in court that he was defending himself and that Davis pointed a shotgun at him from the window of the SUV; prosecutors noted no gun was found, and Dunn’s fiancée testified that he didn’t mention a weapon to her that night.

“I used to say to him: Jordan, you know, you’re just going to have to turn the other cheek, or what have you,” Davis’ mother Lucia McBath told Salon. “Because people nowadays will shoot you.” Davis called Florida’s lightning rod “Stand Your Ground” law “the culprit” in her son’s death, and said additional testimony in Dunn’s retrial for murder would help to “really pinpoint who Michael Dunn is.” A condensed version of our conversation follows.

What was your reaction when the verdict came down?

Extremely disturbed. I was very, very disturbed by the verdict. But I can’t really say that I was surprised…

Every time the jurors had a question about the charges, and about how they were to deliberate on those specific charges in the law, incorporating the jury instructions, [our team] were beginning to get a sense that it was our son’s charge alone…[that] probably was going to be, you know, hung…

At least having a mistrial on Jordan’s charge was better than having a “not guilty” verdict.

One of the jurors, who believes Dunn got away with the murder of your son, told ABC that two jurors saw the jury instructions about “if he believed that he had an imminent threat,” and believed Dunn “was frightened and there was no other option for him in regards to Mr. Davis.” Is that a reasonable conclusion from looking at the evidence?

That’s the thing that Jordan’s father and I have been very perplexed by, is that there was tremendous amounts of evidence -- eyewitness accounts, you know -- that there was no credible threat to Michael Dunn. None whatsoever…

As our attorney, John Guy, said: Look at the facts. You know in your gut it’s the truth.

But…when you start talking about the “duty to retreat,” and the reasonable belief that you were in imminent danger, those kinds of things, when they’re placed in the jury instructions -- that’s what confuses the jurors. Same thing that happened with Zimmerman: even though…it was not deemed a particular Stand Your Ground case, when you have the jurors’ instructions – and we read those instructions -- that Stand Your Ground caveat is definitely in there. And so that creates ambiguity and confusion… And that’s where the law is really coming into play as being the culprit.

If the Stand Your Ground law was not in place, what do you believe would have happened that night?

Are you convinced if that had not been the law that your son would still be alive now?

I am convinced that there may not have been the actions that Mr. Dunn took…

I’m convinced… Mr. Dunn would not have figured already in his mindset… he was going to have immunity from shooting at the boys…

Drug users, or people that sell drugs, even for minuscule amounts there are very strict laws… [But] our gun laws are very, very loosely written… Because they are so loose and ambiguous, it empowers people to just do what they want to do. Because then, oftentimes they are protected under the law…

Trayvon’s case, and many, many other cases where, you know, people don’t even know the names of the victims. This is happening all over the country.

Dunn’s attorney, Cory Strolla, said, “God didn’t make all men equal. Colt did. Colt is a firearm. [Dunn] had every right under the law to not be a victim, to be judged by twelve rather than carried by six.” What do you make of that?

I thought that was horrendous…

But there again, that’s the entire mentality that Michael Dunn has had. So basically that was Michael Dunn’s sentiment. I really believe that that statement was at some point something that maybe Michael Dunn had thought in his mind: That that was his power and his authority.

You’ve become a national spokesperson for Moms Demand Action for Gun Sense in America. Was that a hard decision? How do you see your role in that campaign?

No, that was not hard for me at all. In fact, I was looking for some means of getting involved with changing the gun culture and the laws. I was looking for an avenue. I found Moms Demand Action simply by going to a rally in Atlanta.

After the verdict came down, Ta-Nehisi Coates at the Atlantic wrote, “We cannot protect our children because racism in America is not merely a belief system but a heritage, and the inability of black parents to protect their children is an ancient tradition.” Is he right?

Our children are walking in fear, you know. And not just our children, but Americans all over the country are walking in fear… Are they going to come back home today? If I get into some kind of a conflict with an individual, is reasonable conflict resolution going to be made? Or is someone going to take up their gun and shoot me?

You say, “In God we trust,” but we put our trust and faith in our guns… And that’s a dangerous place for us to be in America.

Florida State Attorney Angela Corey is also prosecuting Marissa Alexander, a black woman who argued Stand Your Ground should have protected her firing a warning shot to dissuade her abusive husband. Her argument was denied by a judge and now she faces a court-ordered retrial. What do you make of her case? Is there a racial double standard applied to Stand Your Ground defenses in Florida?

In terms of Marissa Alexander’s case, I don’t really ever comment on that – they’re still in litigation… The cases are completely different, you know.

Yes… Marissa Alexander is black -- this is that whole situation again with a black family. It’s very sad that that’s happened. But I try not to comment too much upon that. I think I’ve got enough to do concentrating on my own case.

Are you satisfied with the way that State Attorney Angela Corey has prosecuted the case of your son’s killing?

Yes, we are… In the second trial, there’ll be more evidence that we’ll be able to present. Based upon time constraints there were some bits of evidence that could not be presented…

We have been very satisfied. We know that the team, they fought diligently…

So we know that Angela Corey will go back in again and… she will do whatever she needs to do to vindicate Jordan, and to get justice for Jordan. So we don’t have any doubt about that.

We know that the team… fought as best as they could with what they were given, and what they had. But there again, the ambiguity and the openness of that law allowed people to have a completely different perspective about the violence that’s committed towards [him], and we knew that that alone would be something that would determine, maybe, not the best outcome for Jordan’s charges alone.

What kind of additional evidence is going to be brought forward in the new trial?

Everything that’s been made public record already… There’s a neighbor, a couple of neighbors that have spoken out about Michael Dunn since the trial. There are other individuals, other witnesses, that are coming forth, that can attest to his nature, to his behavior -- to who he really is.

Of course the letters that have been released by the court express his mentality and his mindset [One read, “This jail is full of blacks and they all act like thugs” and “This may sound a bit radical but if more people would arm themselves and kill these fucking idiots when they’re threatening you, eventually they may take the hint and change their behavior.”]

So you know, there is more evidence that we can use at this point to really pinpoint who Michael Dunn is, that he’s not a nice guy.

What do you take away from those letters?

I don’t concentrate on those letters very much, because they’re very disturbing to me… I will just say I’m not surprised.

When Dunn referred to himself in a jailhouse conversation with his fiancée as “the fucking victim here,” was that revealing?

He calls himself a victim, but also he won the victory – those are his words. And there again, it baffles my mind how you can consider yourself the victim when you were the aggressor. An aggressor is not a victim. When you have an aggressor, the victim is usually dead when you have… a gun involved.

The advocacy work, the political work that you’ve been doing -- how does that intersect with the mourning process?

I understand… those parents that crawl up in a shell and want to hide behind their pain. I understand that, because there have been days that I literally didn’t want to get out of bed. There have been days that I didn’t want to do anything other than lay in the bed and cry. I understand that. And that’s why I’m very grateful for organizations like Moms Demand Action… It has given me an outlet. It has given me a means to be able to walk through my grief and my pain. But at the same time I feel like I’m able to do something – not just for Jordan, but for anybody else that might go through that. And I don’t want anyone else to suffer that way. I really, really don’t….

I just feel like God has allowed me a means to walk through this. And I’m able to express my feelings, and my hurt and my pain in a public way. Because I know I’m also expressing what so many other victims’ families are thinking and feeling. And they have no platform.

When you said, of Michael Dunn, “You took my future,” what did you mean?

I have always been very grateful for all the support and the prayers, tremendous amounts of support that people have given us. I’m very grateful to Moms Demand Action… I have no doubt that they will be right there by my side.

I feel in spite of everything that has happened with Jordan, I feel blessed.